PLANET RICK DISTILLS THE DARK SIDE OF GRAFFITI, ILLUSTRATION AND TATTOOS 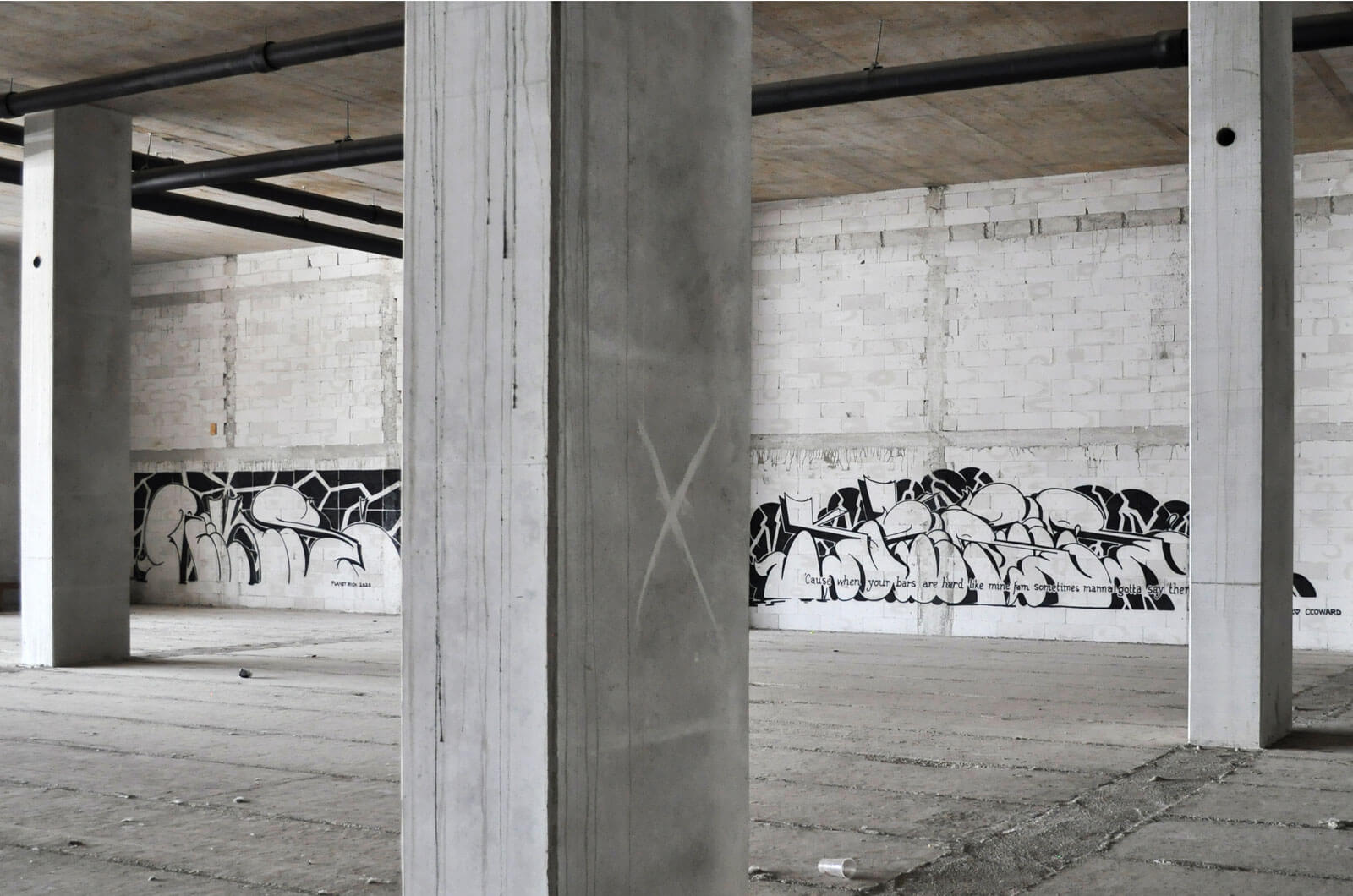 Most artists like to stick to one style, visual conventions and tools that are familiar to them. Planet Rick is not most artists. The Balkans bomber boasts a bulging back catalog of letters, characters and even memes. In the run up to Halloween, we had to get in touch with the man to find out what’s behind his alien art.

When did you start painting, where are you from?
I started painting in 2004 and I come from Ljubljana, Slovenia.

Do you consider yourself a graffiti writer, artist, cartoonist, illustrator, tattoo artist?
I consider myself a thinker that has a strong, almost religious, affinity for the craft of drawing. Drawing in a sketchbook has, in recent years, become my number one output as art and illustration is something I practice alongside my work as a professional graphic designer and art director. Drawing is something I’ll always do, it’s not conditioned by any input, I do it for the love of it. 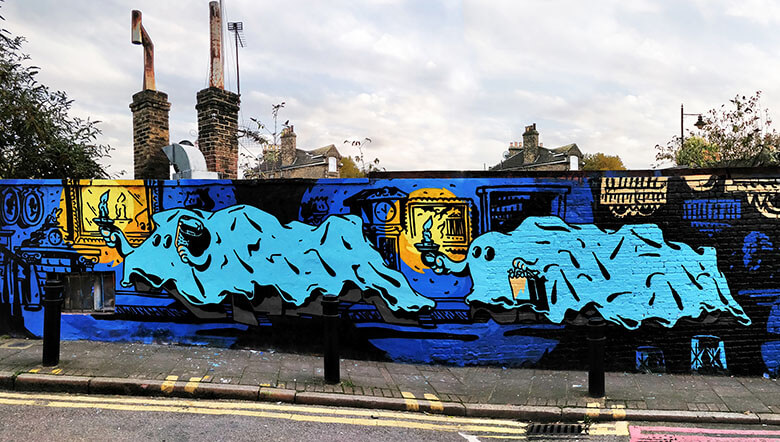 What are the positive and negative points of working with so many different styles?
The positive aspect is the surprise when you create something, that even yourself as the artist, had not expected to happen. The negative aspect is the insecurity that comes with failing in order to gain new knowledge. Not everything you do immediately yields results. I definitely feel like there’s more grind in trying to do something new every time, but it’s the only way of creation I know. 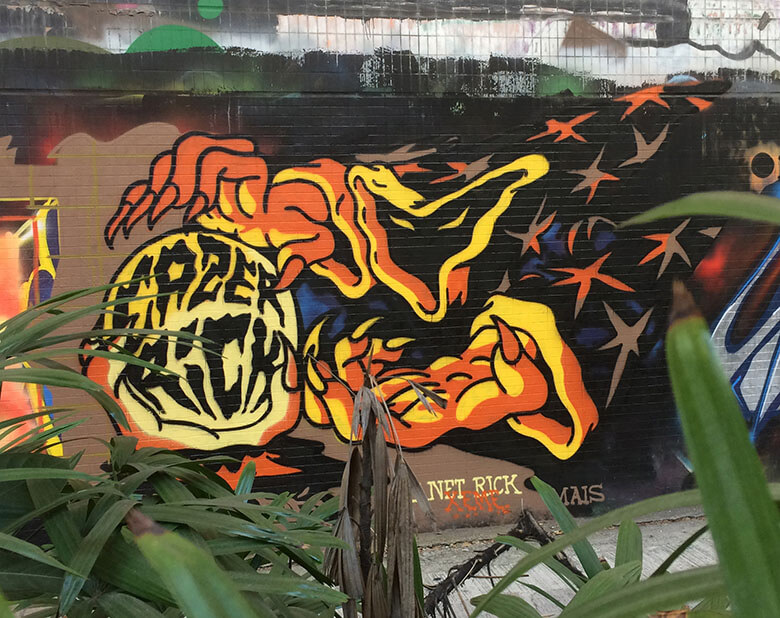 ‘I consider myself a thinker that has a strong, almost religious, affinity for the craft of drawing.’

Tell us a little bit about your inspiration in terms of letters and graffiti style.
My signature letter style, before it became illustrative, was developed out of baroque and secession style of ornamentation. I was studying in Vienna at the time and the city was full of detailed architecture. I always believed that one should look for inspiration outside of one’s direct field of work in order to create something new. It became the first style I could call my own and it took me 6-8 years to come to that point as a writer. Outside of my work, I really enjoy late 90s or early 00s American freight train graffiti. I guess partly because I like their trains, much bigger than the European ones, and because the style seems to be somehow linked to the visual era of my childhood. 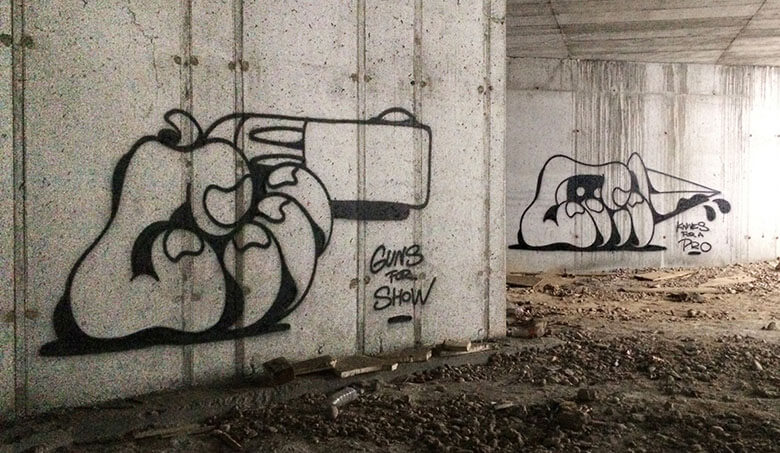 What do you try to express when you paint a wall?
Usually what I paint is a concept that to me seems a clever and innovative way of doing the letters of my name. It’s very visually oriented, but I try to base it on an idea that will make people think. 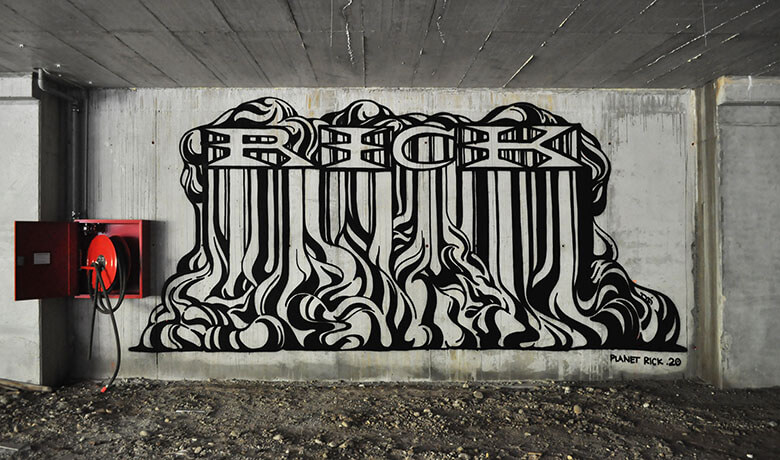 Is it somehow when you produce illustrations?
When I’m doing a wall it’s going to revolve around letters 90% of the time. When I do an illustration I will never base it on letters. Letters, to me, belong on a wall. I’m against categorisations and rules in graffiti, but this is a rule I impose on myself. So that’s the main difference between the work I do on walls and the work I do on paper. On paper I get the chance to explore various tools and techniques so that leads to more possibilities compared to painting with spray cans. In the end, as with letters, I decide on a motif I find fascinating and try drawing it in an as innovative and visually pleasing way as possible. 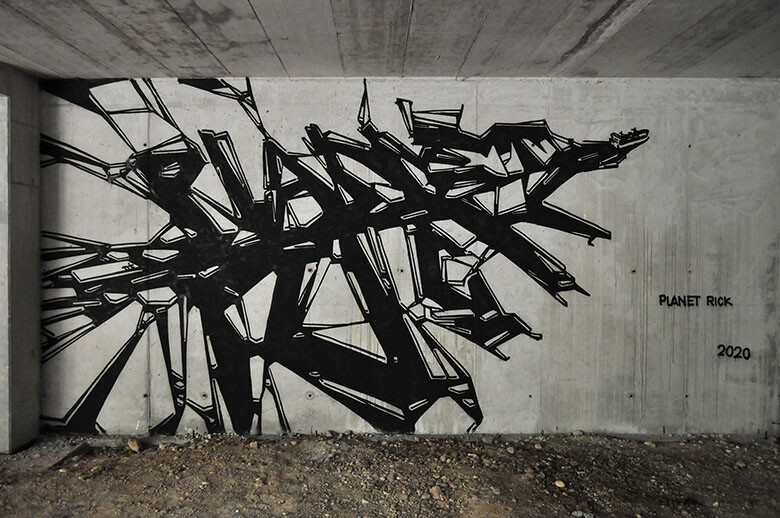 What is your favorite tool to draw characters with, and why?
I guess my favourite tool is the next one, the new one. I’m probably mostly recognised for medium-thick-single-width line illustrations, but I use flex, fude and stub nibs as well as brush pens and pencils. I really like it when the pen prevents me from drawing lines that feel too perfect and predictable. If I can surrender some of the control to the pen, so the tool does some of the work for me, that’s a perfect result for me. Switching tools enables me a variety of styles as you can’t just replicate the same character or shapes with different pens, you have to explore the possibilities of each new tool, let it lead the way. 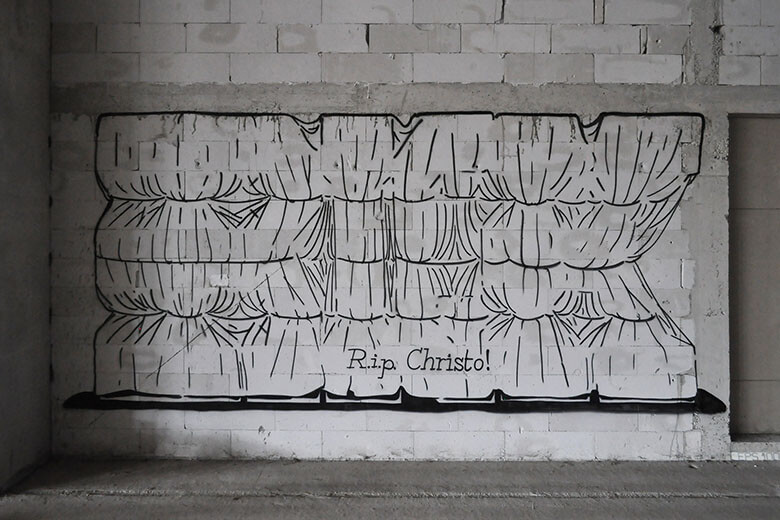 ‘I take an idea I want to express and no matter how complex it is, strip it down to its essence.’

Your universe is very dark. What are the subjects that inspire you the most and why?
I’m mostly inspired by coming of age, horror, gangster and hood American movies. Growing up in Slovenia all of those provided a safe scare for me and that’s something I’d like to provide for my viewers. Shine a light on a darker subject in a way that helps them get through their struggle. I also realise that a more serious/darker subject matter is taken more seriously than a lighter one. The phenomenon can be observed in all kinds of culture, art, music and especially movies. 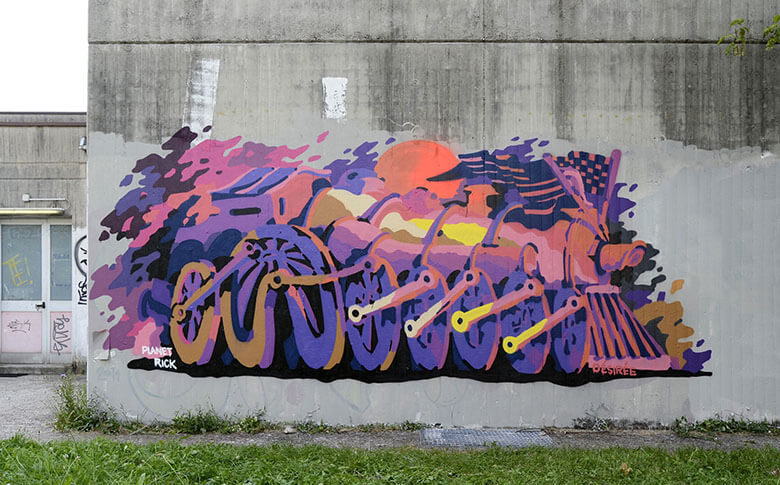 Color doesn’t seem to be very important in your work, is it for style or for conceptual reasons?
I think of myself as a visual distiller. I take an idea I want to express and no matter how complex it is, strip it down to its essence. I guess colour is one of the first things to go, although, if it proves itself crucial to the idea I will, without hesitation, exploit the psychological impact colour has on the viewer. It is probably one of the strongest visual stimuli and I feel I should be exploring it more. This less-is-more logic comes from my background in design. I designed a lot of posters in my student years and with posters one has to convey so much with just a single image viewed for only the briefest of moments. 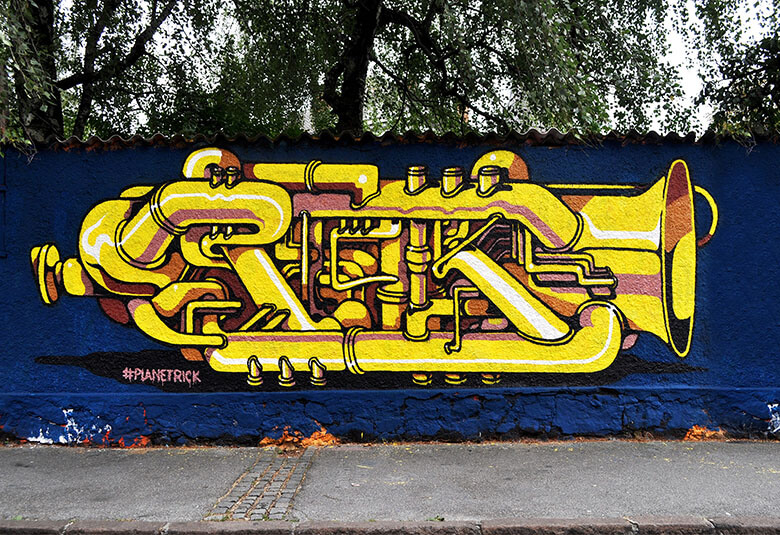 Tell us about the artists that inspire you.
I’m always inspired by conversations I have with Amor Gavez, Mosk83 and Sidas ATE. We share thoughts and ideas on our work, other artists and anything and everything in between. I was also inspired by sharing walls with Cazer, CCoward, Bilos and Richt. You can learn a lot by painting with other people, but you have to be open to new things, and lose the shackles.
I’m inspired by artists who make an effort to bring something new to the table. I know everything’s probably been done already,  and that is why I appreciate it even more when people go to the source, the basics, unlearn the conventional and learn it again with their own perspective. 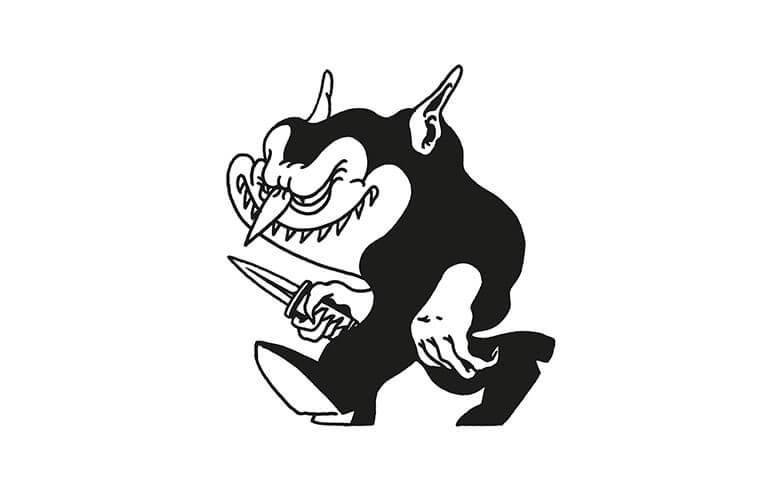 We’ve been pushing horror, fantasy and sci-fi art all on month on MTN World and across our socials. Use the hashtag #mtnfanstasymonth to check the finest productions we’ve found, including an interview with Skip Class, JPS and the latest episode of the MTN Podcast with Tatiana Suarez.