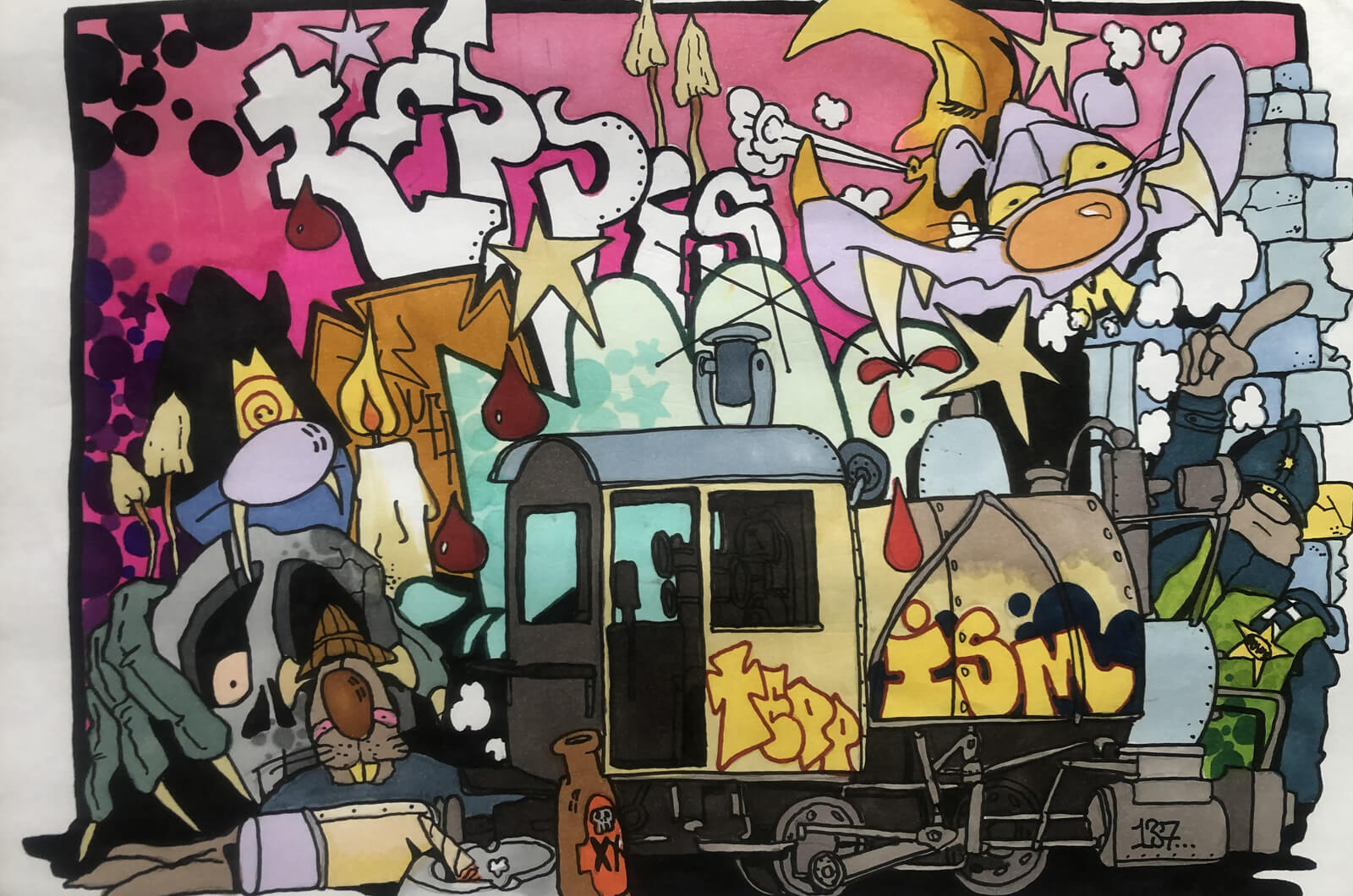 Vents137 is the man behind a series of incredible illustrations, full of characters charged with intrigue. In his recent work, we’ve noticed the creeping influence of horror on his repertoire. We contacted him to decrypt the codes hidden in his fascinating creations. All aboard the ghost train!

Your illustrations are full of characters that appear to contain hidden references to each city. Is that the case?

Yes, the characters and items within the scene are usually specific to the location / city. The empty beer bottles are specific to the place, the brand most local writers choose. The security / police / workers will be wearing the uniforms of that area, etc.

Most of my pieces are commissioned, so the person has usually given me some specifics to include, like the clothing brands etc, usually Nike / Adidas / Polo Sport.

There’s usually a pigeon in each piece, these represent some of street people you encounter when painting: drunks, junkies, dealers and all the other people that are found in every city (just like pigeons). 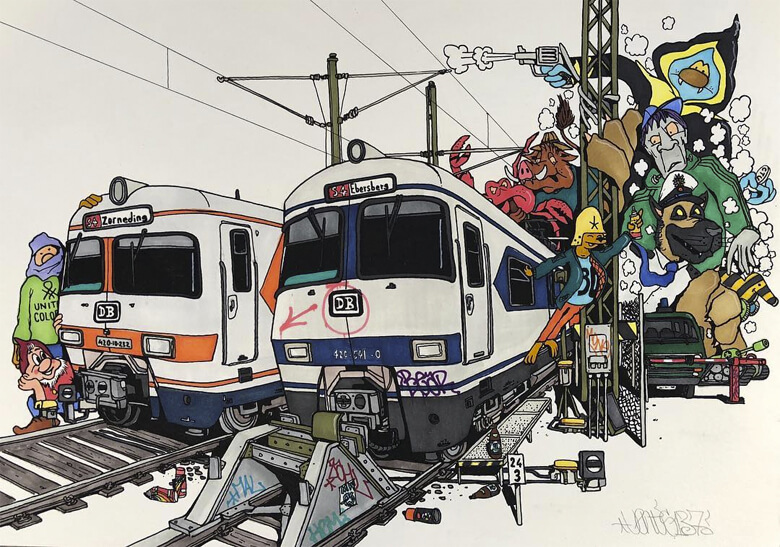 Could you explain the appearance of a specific character?

I like to include a little nod to other design within my work and characters. So for example, take the “Barça” piece that Japon asked me to draw for MTN featuring the Barcelona subway. This drawing includes Cobi, the Barcelona Olympic mascot, a cool little character, and also a monster wearing a red Barretina hat to represent Catalonia.

“The bigger characters in the background represent the overwhelming feelings and associated risks with train painting.”

Do you think that the public can understand these references easily or is the fun for them to make their own interpretation?

I think some codes are more obvious than others. The security uniforms are fairly recognisable to accompany the train in the image, but there’s always subtleties, like the little Felton can in the Barça piece, which would only really mean something to older Spanish writers. 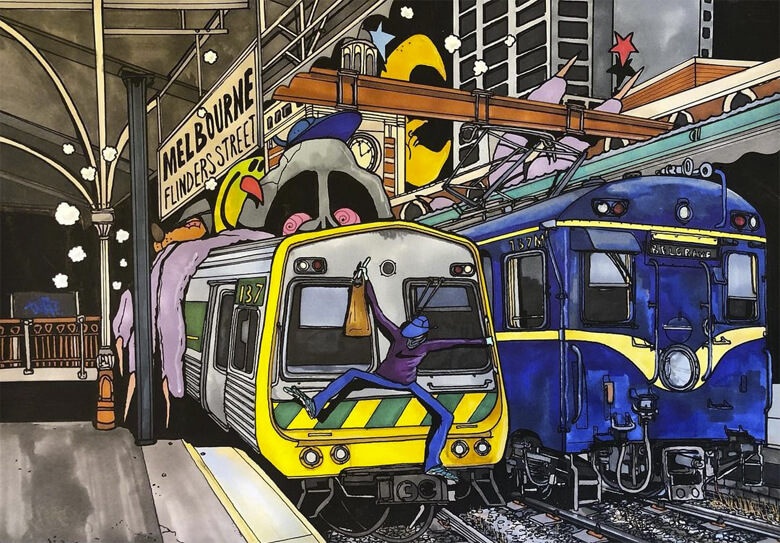 Do your representations tell real stories or are they compositions of what each train model suggests to you?

A lot of the foreground imagery is at the request of the person the drawing is for, particularly the characters painting / chilling / posing with the train. The overall feel of these foreground figures represents the fun and exhilarating feeling of the moment that they are in. A lot of the more scenic pieces I do are from a photograph or a composition from several photos of a particular spot. They’re little snapshots in time, that encompass the feelings and atmosphere of a yard.

It seems that there are more and more scary elements, why?

The bigger characters in the background represent the overwhelming feelings and associated risks with train painting. They’re supposed to represent the worries of the writer, be it security, police, rats (snitches), monsters (beefing crews etc) and at the very back behind them all, there’s an acid smiley. The smiley is associated with rave culture and more importantly euphoria, it just means mission complete! Once you’ve overcome all these other risks it’s that feeling of getting it done and it’s party time!

“But it also represents a metaphorical form as the wider effects on writers, be it alcohol, drugs, suicide, which is far too big a problem that has affected many friends worldwide.”

The skull has become a constant element, what does it mean exactly?

The skull represents the ultimate associated risk, death! Be it physical death in the immediacy from electrocution, being hit by a train, falling from something etc. But it also represents a metaphorical form as the wider effects on writers, be it alcohol, drugs, suicide, which is far too big a problem that has affected many friends worldwide.

Or to a lesser extent, prison, fines, ruined relationships etc that eventually might end a writers career. 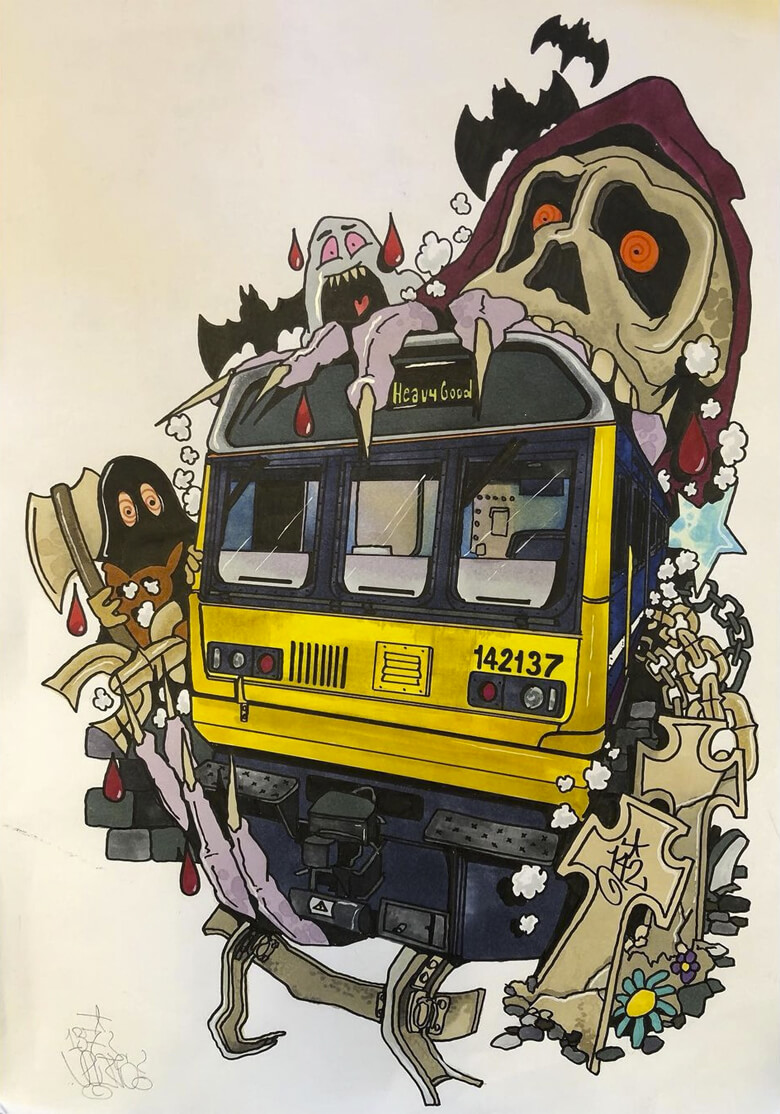 Have you been through frightening moments, stuff that’s paranormal or difficult to explain, while painting?

I like to paint by myself a lot, and have experienced some things that, yeah, I just can’t explain when I’ve been out at night; like seeing light formations in the sky and so on, but I guess there was probably a logical explanation for them. I think the scariest moment painting was not paranormal in any way, just plain scared me.

I was drunk walking tracks and tagging boxes on a long straight stretch near where I used to live, we have third rail here, which is a live rail rather than overhead wires. I never knew if they were on permanently or just when the trains were running / approaching, but I tripped and fell as I crossed from one side of the line to the other and landed in a sort of press up position with my chest about two centimeters above the third rail. I was on my own and literally scared myself sober.

Have you had unnerving dreams related to graffiti?

Haha my dreams are mad enough as it is, weird dreams of death and the end of the world, but they’re just dreams and they’re not usually related to painting. 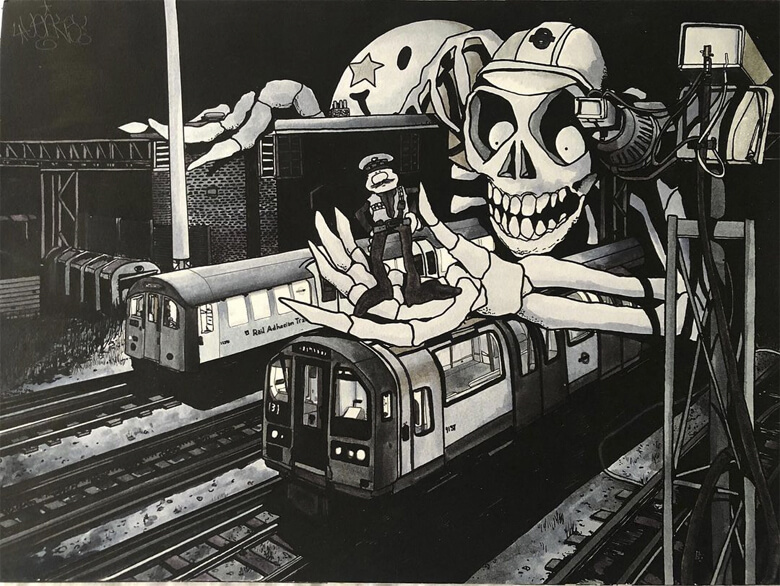 I used to be really worried that I would damage my arm / hand and not be able to draw, as I make my living from artwork it was always a fear. So I taught myself to paint with both hands. Nowadays I’m more worried about going blind, my eyesight has got worse as I’ve got older, I couldn’t imagine not being able to see.

This Halloween don’t miss the creepy content published over the MTN channels: talking tricks with Skip Class, a petrifying playlist by Baer the Butcher and Harry Bones’ most mortifying monsters. 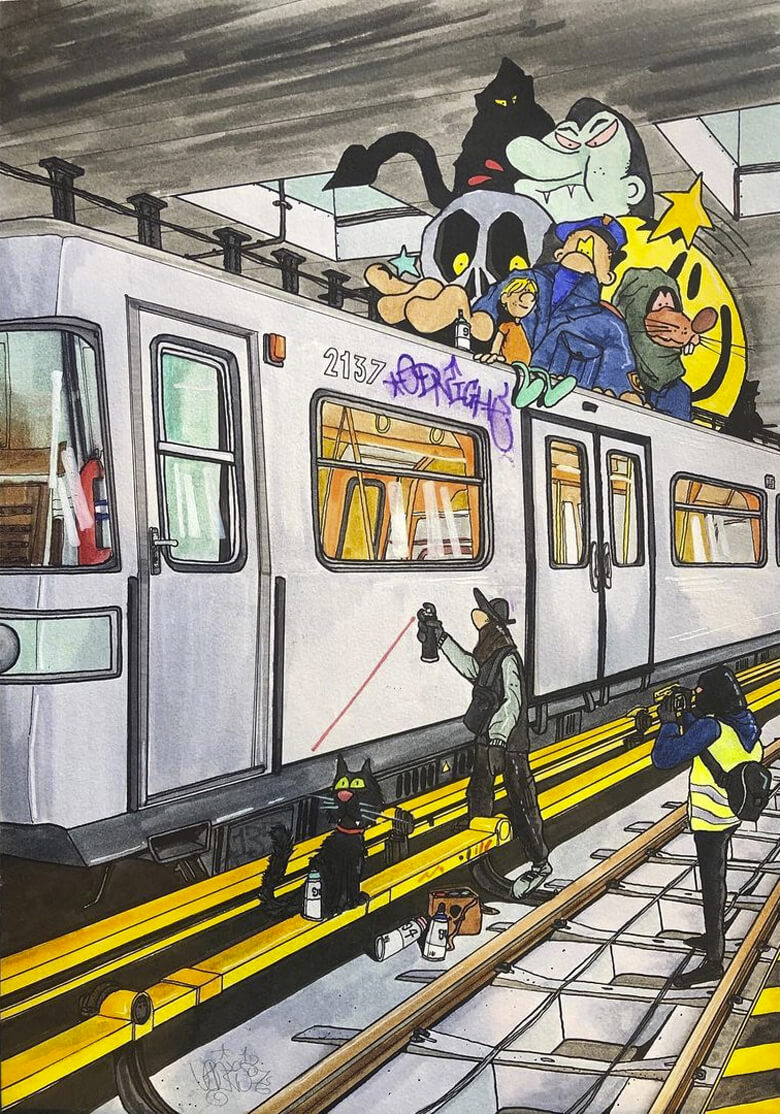 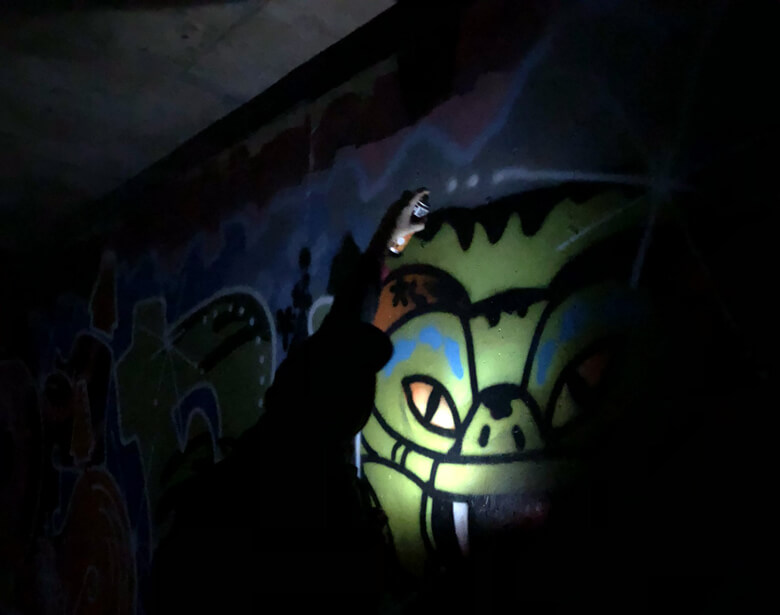