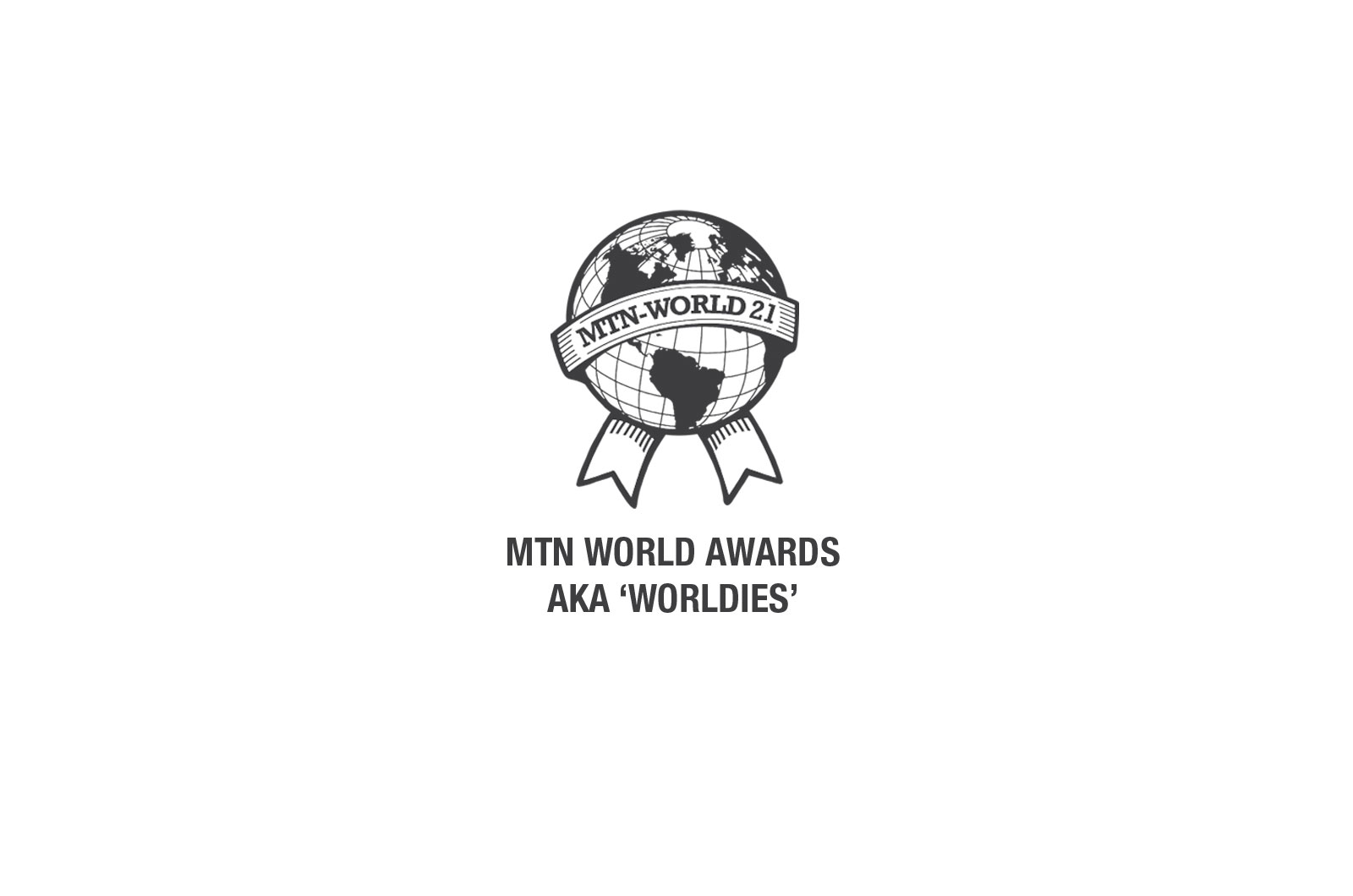 It’s the end of an unforgettable year at MTN World, and we thought that there could be no better way of wrapping up a year in aerosol news than giving out awards to the people who defined the last 12 months in the world of graffiti. So here come the First Annual MTN World Awards – ten categories of varying significance and ten winners who can be proud of having their names associated with such a prestigious prize ceremony.
So without further ado… 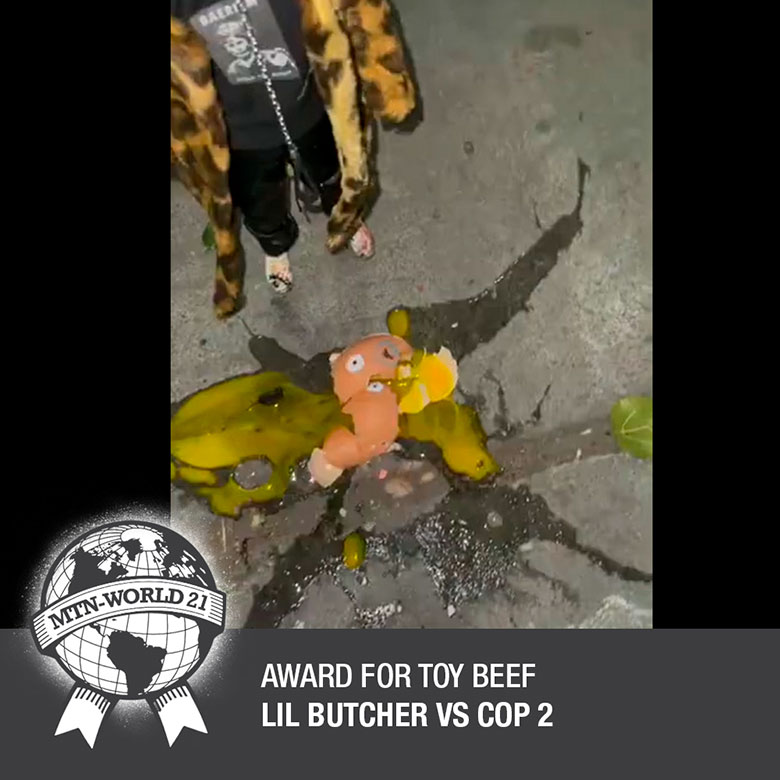 Depending on your perspective, beef is an entertaining aspect of graffiti that helps to keep standards high in your city or a pathetic display of toxic masculinity that curbs progression in our scene. In any case, the confrontation between Baer associate Lil Butcher and Cop 2 made for hilarious viewing, as the “troubled doll” ran up on the egg version of the much maligned New Yorker. 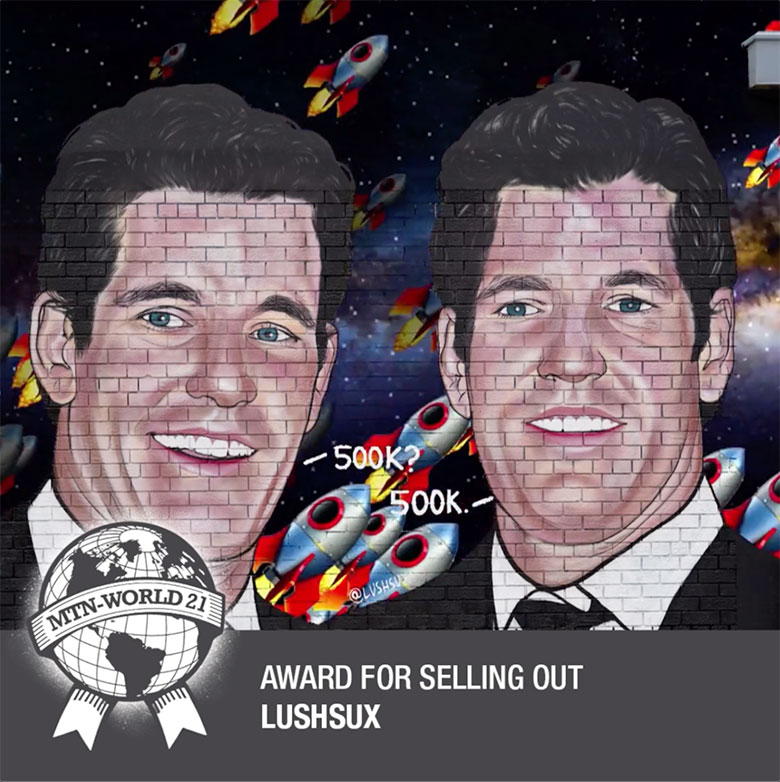 Award for Selling Out
Lushsux

The Melbourne Mammoth Lushsux has long been playing a different game to the rest of the world’s writers. Having given up on style writing some years ago, 2021 was the year that he went all out to get paid, largely thanks the possibilities of selling NFTs of his trademark meme walls through frankly baffling new platforms like Nifty Gateway. The digital wallet of MTN World is still pretty bare but we imagine his dream of owning a Lambo is close to becoming a reality with contributions from his new tech bro followers. 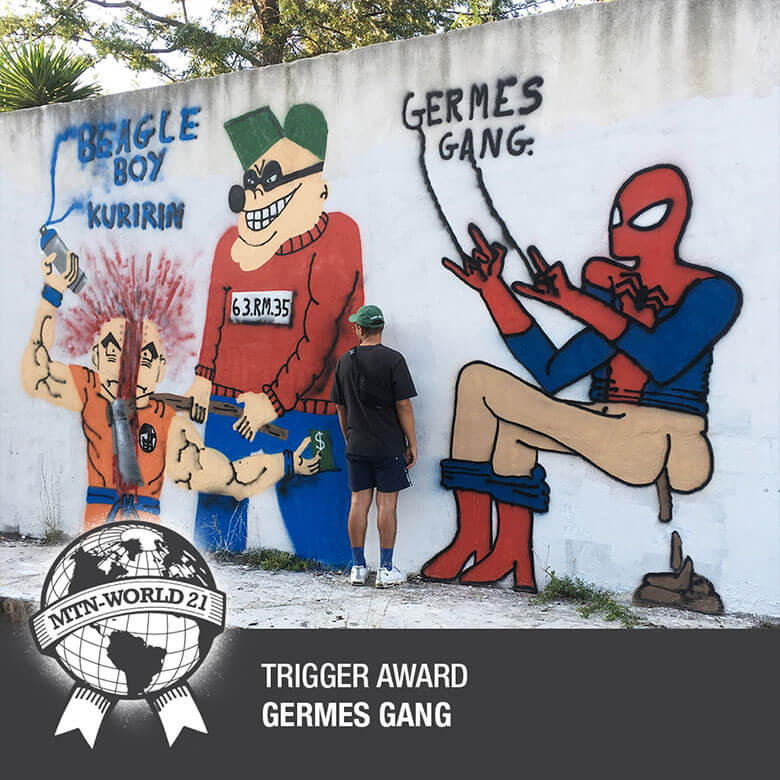 Our anti-style publications on social media should come with a trigger warning. There was no better example of this than the furore generated when we posted a few photos from three lads from Lisbon known as Germes Gang. Who would have thought that a few kooky collages of comic book characters could conjure up so much criticism amongst our followers? It seems that certain commentors would like to dictate how other people express themselves with spray paint. 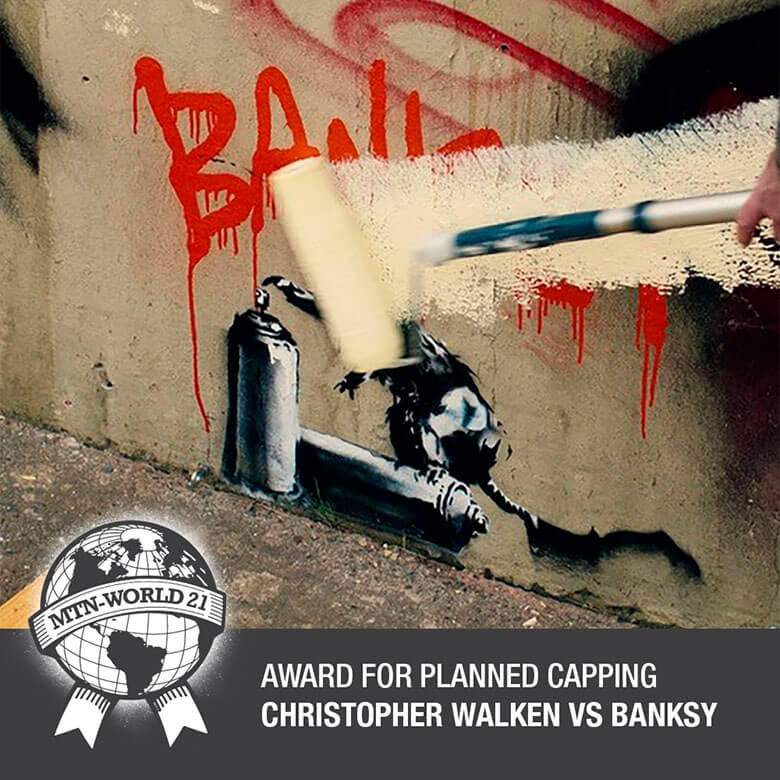 You read that right. In November 2021, Christopher Walken went over a Banksy original whilst acting as a graffiti cleaner in Bristol. Whatever your opinion of the English stencil maestro, his work disappearing off the streets is big news. Except… it wasn’t as straightforward as all that. Never shy of a showbiz stunt, Banksy actually created the piece for the purpose of the BBC series called The Outlaws, and its removal by the veteran actor made headlines around the world. Genius. 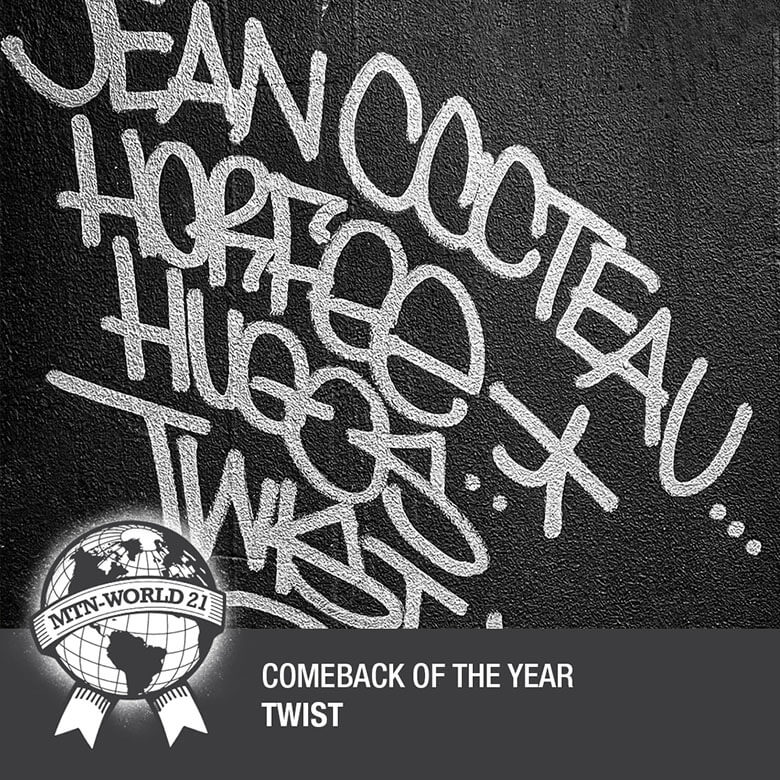 Comeback of the Year
Twist

It seems to MTN World that they don’t make A-list graffiti writers like they used to. The legends who went from tags and throws to collabos and shows are few and far between, and some have disappeared off the map completely. However, one of those universally adored names popped up again in 2021, in the form of some incredible hands in the French capital along with a piece on its subway system. The true identity of Twist may never be known, but we hope it’s not the last graffiti we see from the Californian king. 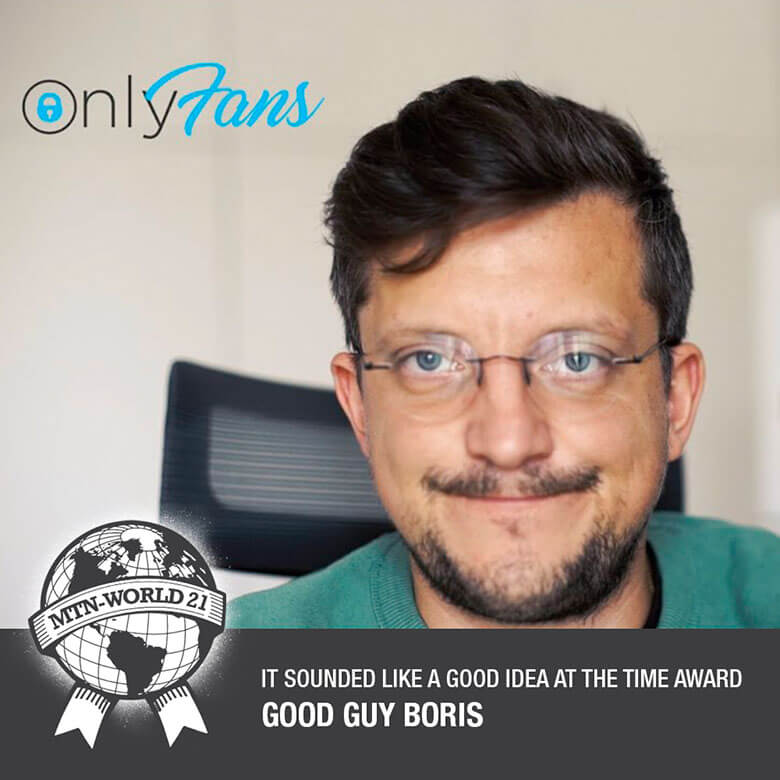 It was another notable year for Good Guy Boris. In February he dropped an action figure and of course couldn’t keep away from the NFT game, also minting a picture of a whole car featuring his famous face. In April it appeared that he’d come up with a scheme to keep his car on the road and his trunk full of paint, opening an OnlyFans account. Promising to post exclusive graffitich content for the price of $20 a month, the Bulgarian bomber was active on the adult platform for just three months before breaking off the relationship. 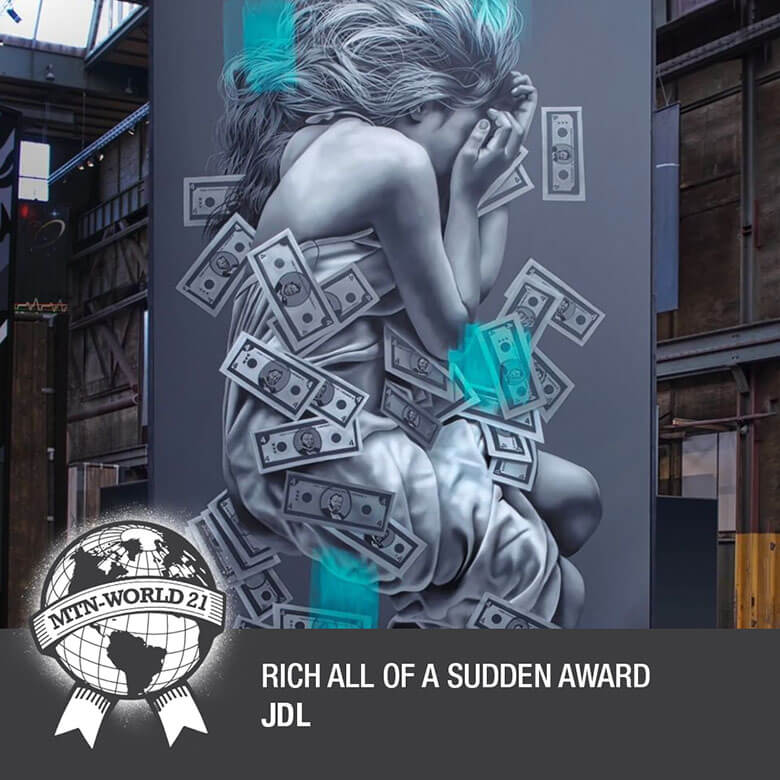 Rich All of a Sudden Award
JDL

Judith De Leew is an Amsterdam-based artist whose career took her from tagging to painting socially-conscious murals all around the world. She has made her moves wisely, painting at important events like Wynwood and Roskilde as well as collaborating with worthy partners like Yourban2030. But she hit the headlines in 2021 with an incredible act. In November she sold some work for the crypto equivalent of $2.9 million, donating one million of the earnings to Gioca Con Il Coure, a charity that looks after children undergoing cancer treatment. Bravo. 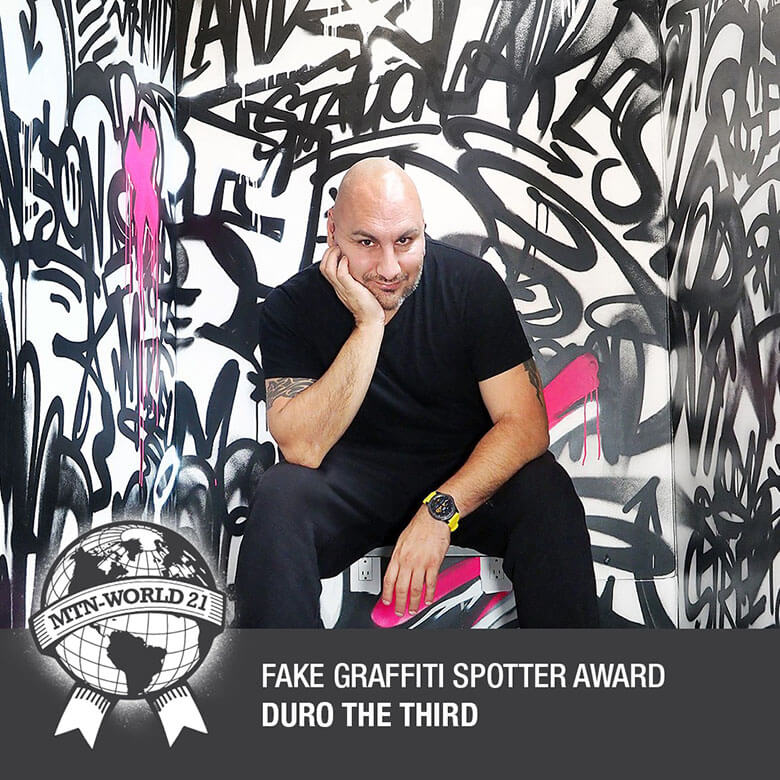 Duro The Third is a Toronto based veteran of graffiti and BMX that is no stranger to corporate collaborations, having worked with brands like Lexus, Walmart and Amex in the past. So, he was in a great position to point out an absolute fail orchestrated by Gucci and Balenciaga this year. The two luxury brands wanted to tap that fat cap spirit, so huge tags featuring the word GUCCI popped up on the front of Balenciaga stores worldwide. Except the marketing geniuses figured that it would be better to produce enormous adhesives instead of letting loose with an aerosol, with predictably wack results. Say no to fake graffiti! 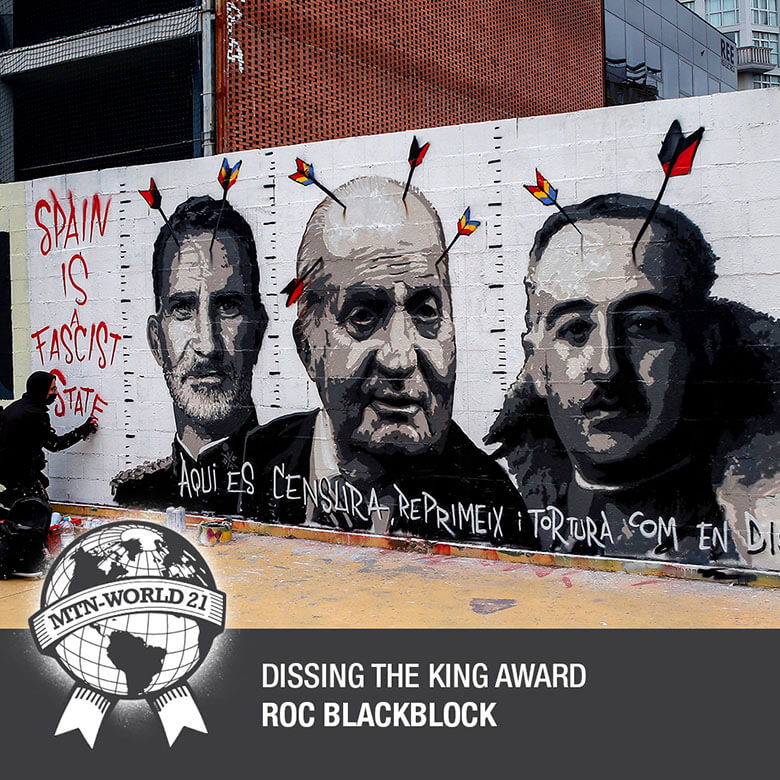 Closer to home, Roc Blackblock gets a prize for going after the King. And we’re not talking about a writer. Following the incarceration of Catalan rapper Pablo Hasél, the outspoken activist took part in a jam calling for his release. He pulled no punches with his portraits, painting the King of Spain and his father alongside the dictator Franco as the targets of arrows painted in republican and anarchist colors. Aiming to reach an international audience, the artist assured us that “Spain is a fascist state.” Ouch. 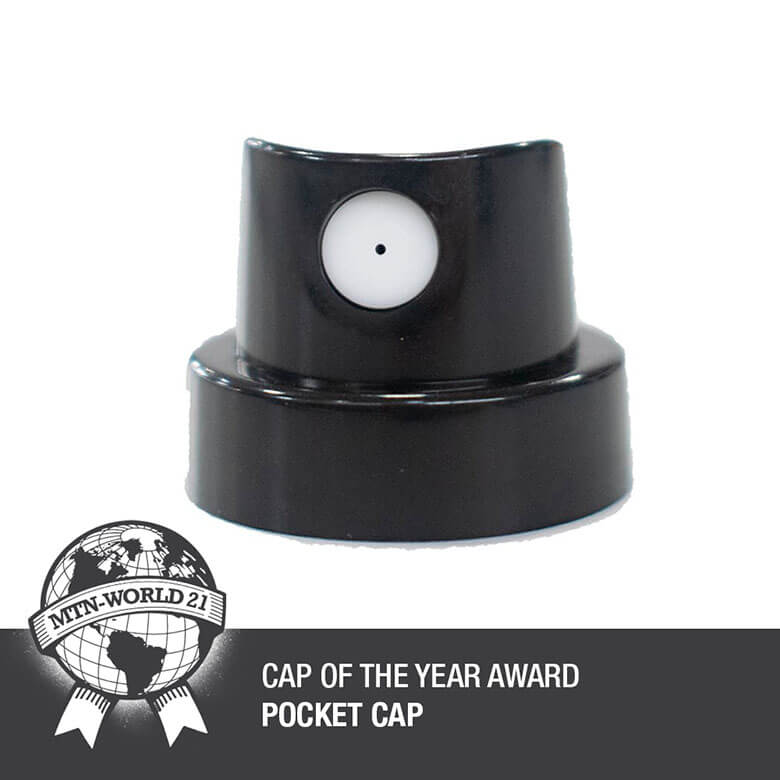 A few years ago, Montana Colors paint switched to the pocket cap as the default nozzle that would come complete with each aerosol. The reason has never officially been revealed, but MTN World can tell you in complete confidence that it was to encourage anti-style graffiti and provoke a culture war within the scene that would lead to more capping thus selling more paint and generating more engagement on the Montana Colors social media. The plan worked a treat, and the cap has therefore been officially recognized as the finest on the market, despite what the haters may say. 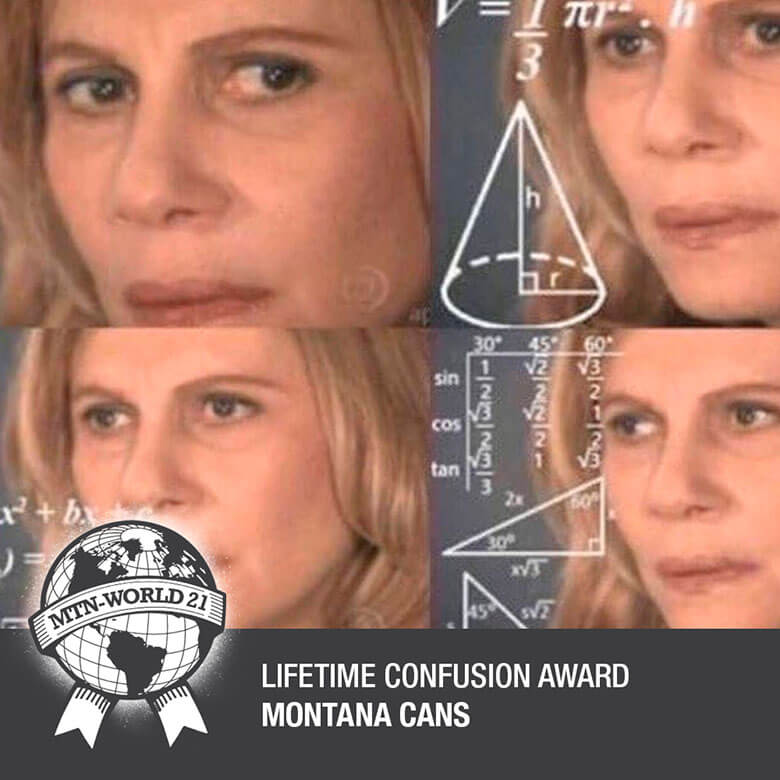 We complete the ceremony with a special award created by our long-suffering Instagram admin. Responsible for checking all the mentions, DMs, comments and requests for sponsorship every day of the year, over half of his working week is dedicated to explaining to ill-informed writers that tag us instead of rival brands that Montana Colors and the other Montana are two different companies. Fortunately an article appeared this year explaining everything, so our followers are soon enlightened.

So what did you think? Who did we forget? Which era-defining events will form part of the 2022 gongs? Let our admin know via a cheeky DM on Instagram, he’s looking forward to reading the messages over the holidays 😉