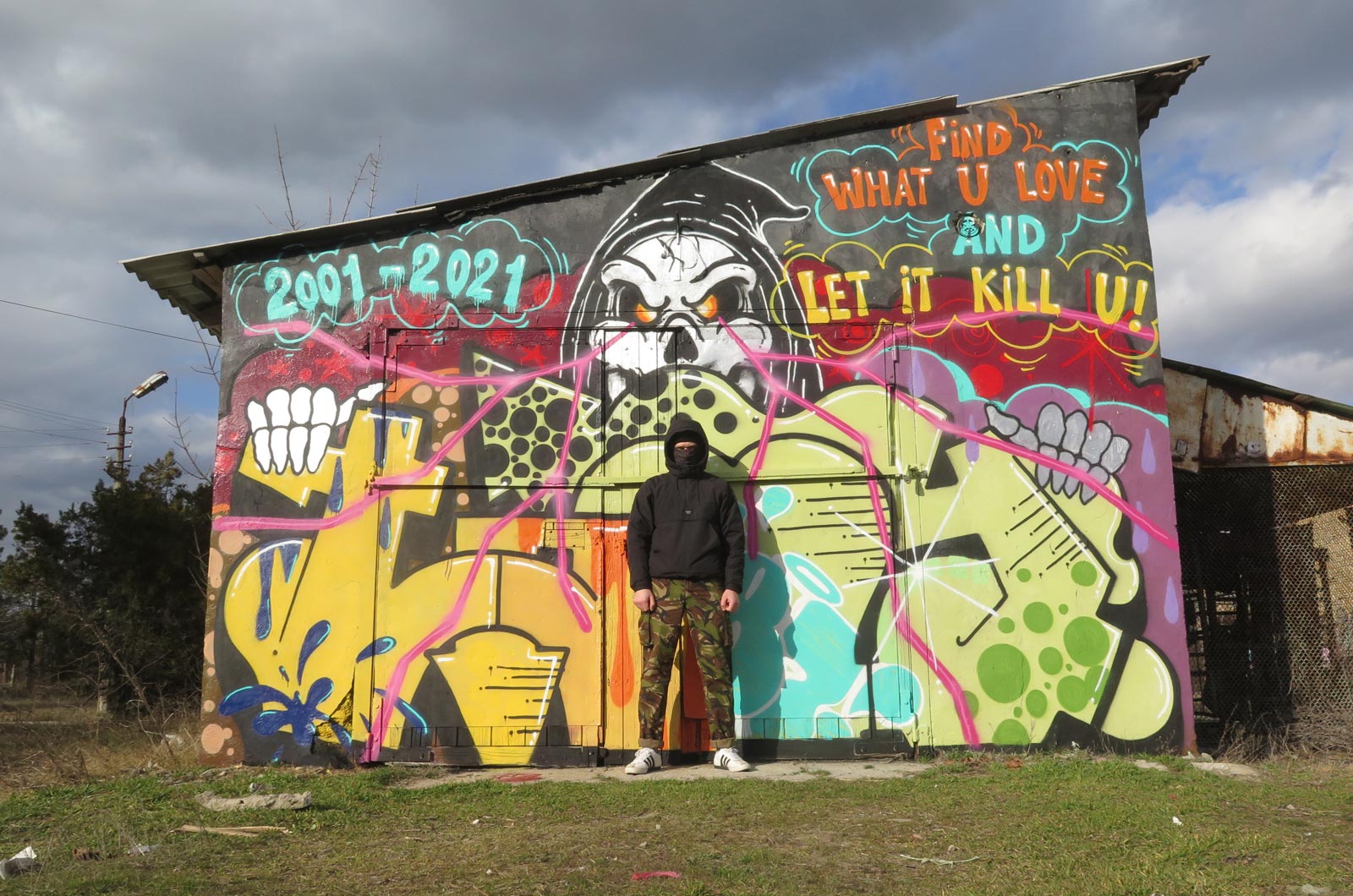 2ple, Toy, Esto, Rvet are some of the noms de guerre utilized by this enigmatic graffiti writer with a refined approach to the construction of letters, choice of colors and characters.
He introduces himself as Estoy87. His style is characterized by thick, solid shapes, applied with the minimum of fuss and a retrained balance of funk and elegance, often complimented by vintage cartoon characters. But this is only the visible face of this Eastern European writer, whose history and creative talent goes far beyond what you could imagine.

MTN World caught up with the mysterious figure to find out about his history, adventures and how he constructs his self-taught work on canvas. 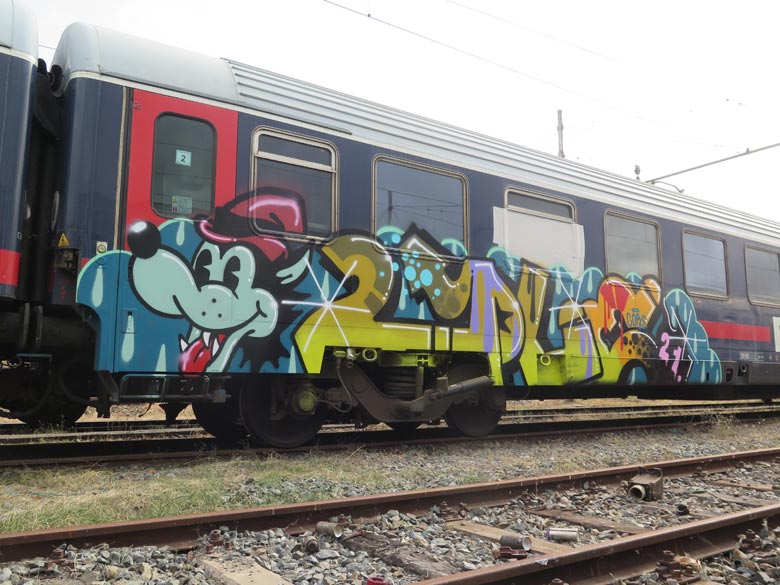 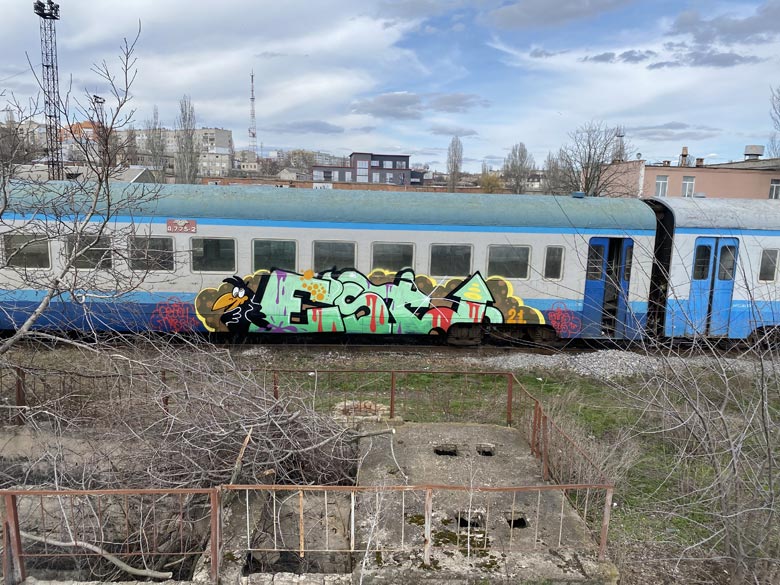 We’ve seen you write Est, Toy, Rvet and B.Ls, sometimes incorporating Cyrillic letters, so it’s a bit difficult to understand which your crews are and what your real tag is. Could you provide some clarity on the matter?

I’m a graff bomber with a lot of names. Yes, I’ve painted Estoy87 over the last two years, but before I did other names and in the future I think there will be more. So “name” in this sense doesn’t mean anything to me.
My crews are DNRS, BLS, TMBS, AC and VLS.

“I was born in the USSR. The iron curtain fell and along with it, the great big union and I became a citizen of a different country. The mafia came to power. (..) The concept of advertising appeared(…). The TV started to show American movies. I saw graffiti for the first time then.”

Can you summarize your career as a writer? When did you start and how has your work evolved?

I was born in the USSR. The iron curtain fell and along with it, the great big union and I became a citizen of a different country. The mafia came to power. There was chaos and gang warfare on the streets.
People were in constant search of work. My family lived in poverty, like 90 % of the entire USSR. TV companies became private. The concept of advertising appeared, which didn’t exist at all in the USSR. Coca Cola, Snickers and other products from the foreign world appeared in stories. Jeans were no longer contraband. The TV started to show American movies. I saw graffiti for the first time then. I liked it straight away, but I didn’t understand what it was. Shortly after, information arrived about this subculture through different teenage magazines about skating, music styles and bands.

“As Soviet people say, “Fishermen recognize fishermen from far away”, so I met the people involved.”

I started my bombing in 2000. I was a schoolboy. At night, without telling my parents, I went around the streets near my school and did tags with home-made markers. The first piece I did was in 2001. I was from the second generation of graffiti writers in my country. Guys from the capital and big cities had done it some years earlier.
I was poor so I could only paint three to five small pieces a year. Going to paint one piece was totally epic for me.

In 2005 I went to study at university. At that time, graffiti started to be fashionable in the post USSR countries thanks to the legendary “Зачем: Гоп Стоп” (Zachem: Gop Stop) documentary and other graffiti movies from Europe. As Soviet people say, “Fishermen recognize fishermen from far away”, so I met the people involved. We formed a crew and started bomb trains. During the time people came and went. Typical. 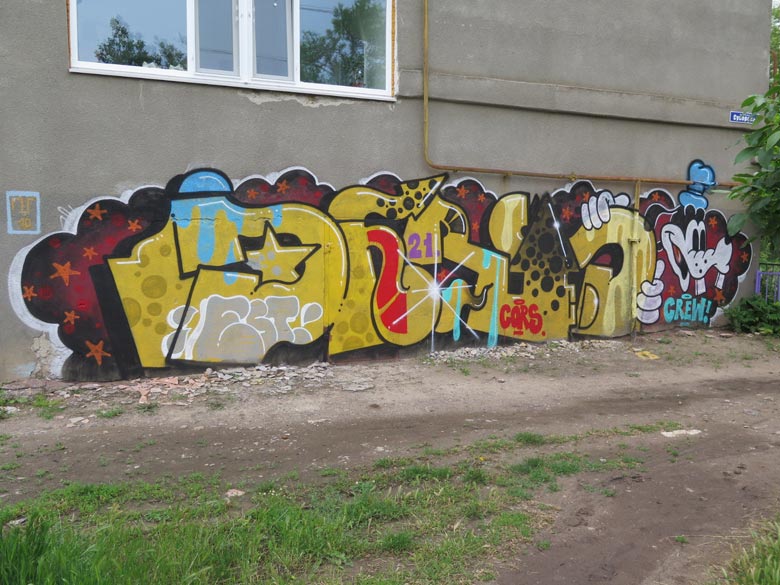 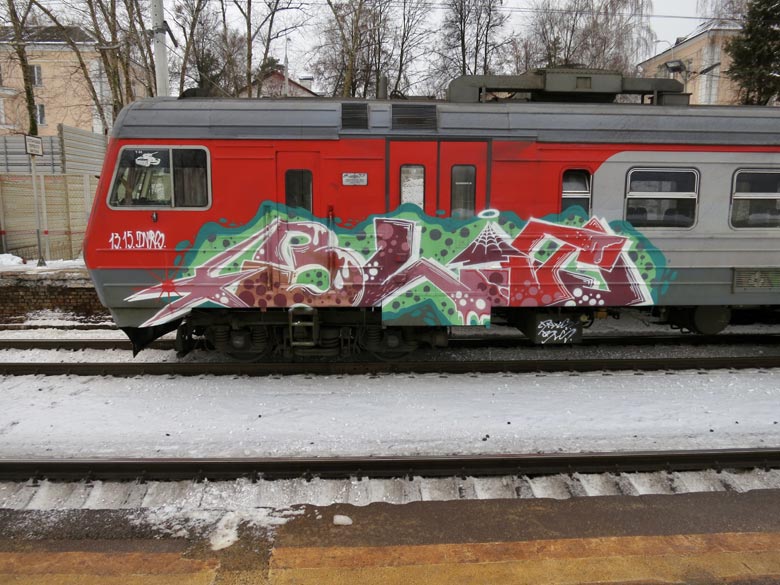 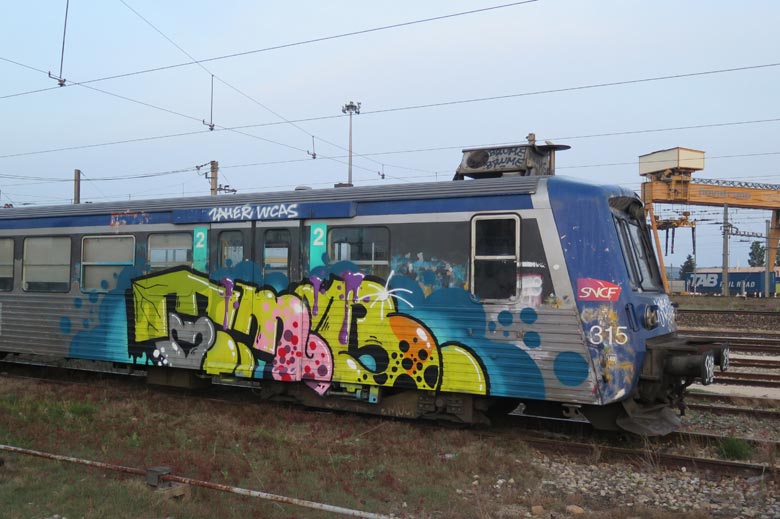 “Graffiti was only for fun. It was cocktail of alcohol, drugs and painting. But during the years I understand that only graffiti can fill my emptiness, that graffiti is my drug now.”

I left my country searching for work. New work, new places, new people. I was young and crazy. Graffiti was only for fun. It was cocktail of alcohol, drugs and painting. But during the years I understand that only graffiti can fill my emptiness, that graffiti is my drug now.

Where do you usually paint now?

Where I paint depends on the city. If it’s possible to paint trains, I try to paint trains. But when I’m back in my country I usually paint streets, because it’s chill and the train system is too small to paint it hard. 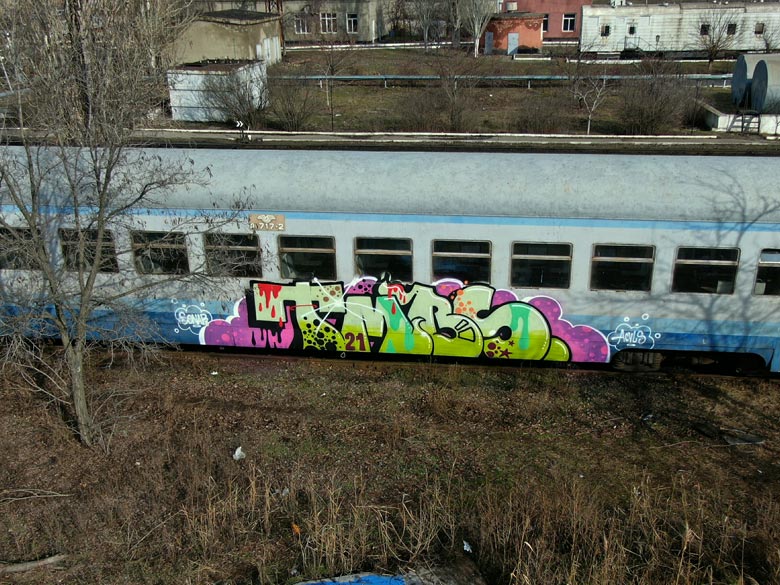 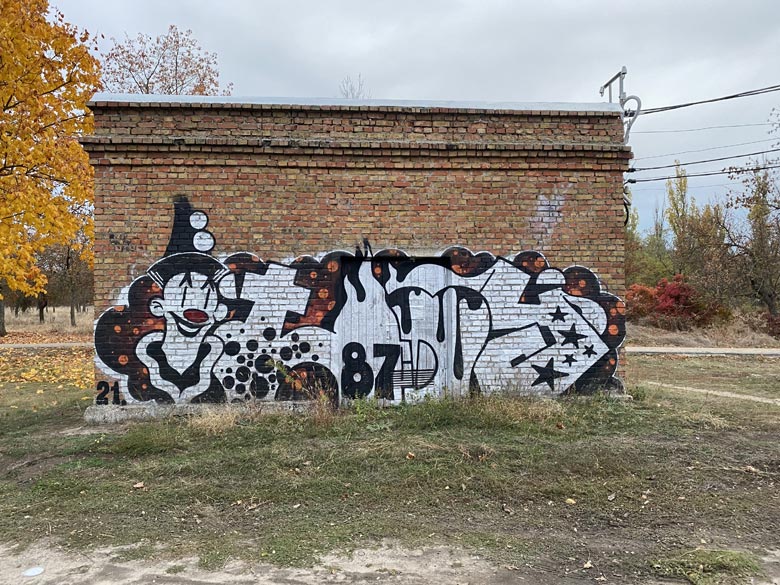 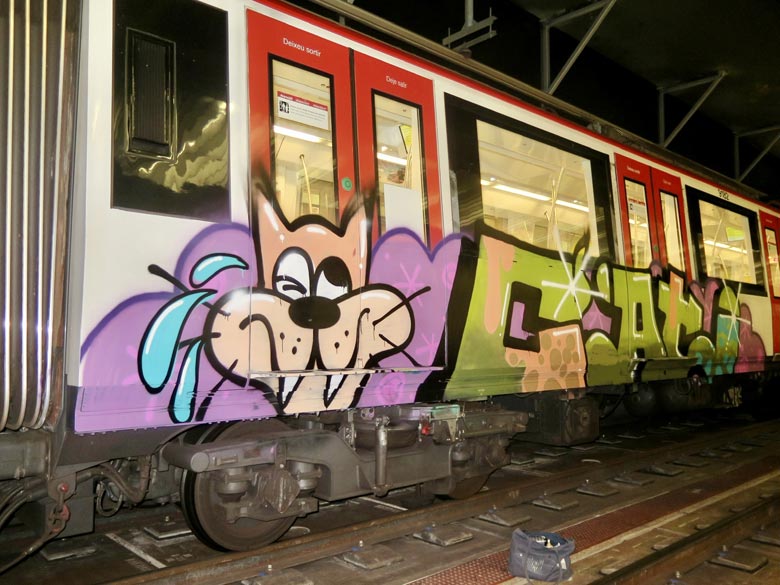 Do you think your style can be associated with a particular scene? What is it that characterizes your pieces?

I can’t say specifically, but the internet opened a huge window in my graffiti world. I like graffiti from Europe, because it started much earlier than in the post-USSR so it has more quality. I began to take graffiti more seriously; I began to try in every possible way to develop my work.

I don’t have a defined style, because if you try to develop constantly, then changes and transformations are inevitable.

What do you consider important stylistically in a piece of graffiti?

That’s another question that I cannot answer specifically. In fact, everything counts. Because style consists of little things. Sometimes I notice my handwriting in construction elements of my font. Letters can be divided into written and drawn. Perhaps that’s why we all see the same letters, each in their own way. 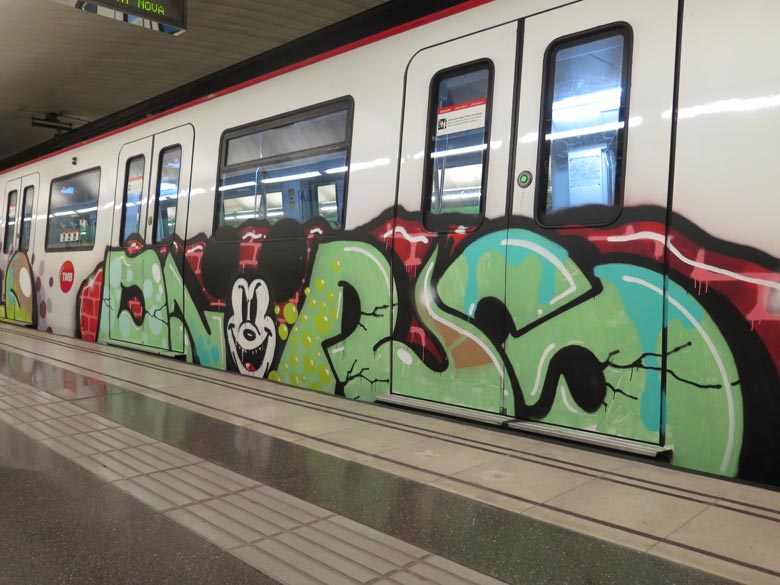 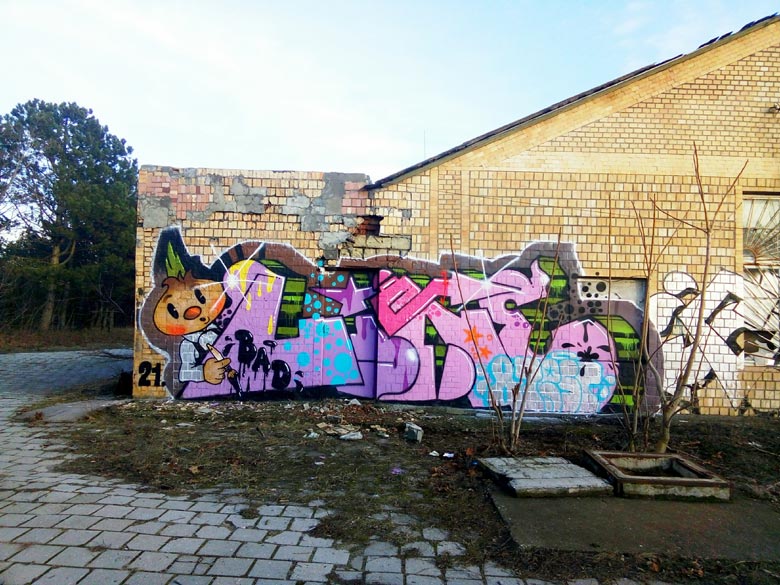 What role do characters play in your graffiti?

I started to paint characters for my development. I painted them before, but usually on some chill walls in Spain. I was living in Barcelona for two years. It’s a chill city, friendly people, good weather. It was paradise for me. I met Bored. I liked his view on this matter. We started doing street productions with characters with stinky paint that I found in the street dumps. I loved Barcelona for finding free latex paint. In my country we don’t have this option.

I saw panels by Shiat in Barcelona and Jeico in Berlin. These guys do crazy stuff. It was a huge motivation for me. Barcelona was great experience for me. Now I’m living in France. Here people paint as fast as in Spain, but if it’s possible to paint more than 15 minutes, I’ll try to do character for sure.

“For me, modern cartoons are digital, voluminous, more realistic and they lose their original appearance. I love old, hand-drawn cartoons.”

Why do you choose to paint classic cartoon characters?

Because I grew up with these cartoons. For me, modern cartoons are digital, voluminous, more realistic and they lose their original appearance. I love old, hand-drawn cartoons. They express volume in 2D. They look simple, but they’re not. Sometimes I use characters from cartoons, sometimes I come up with my own. 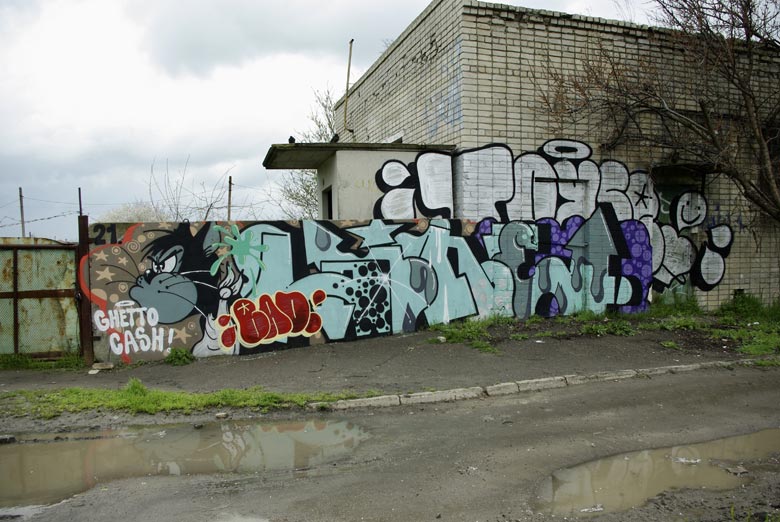 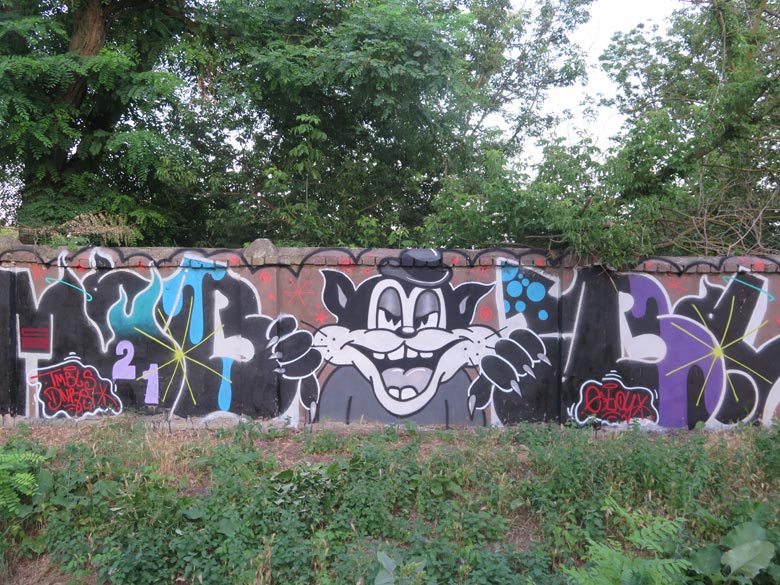 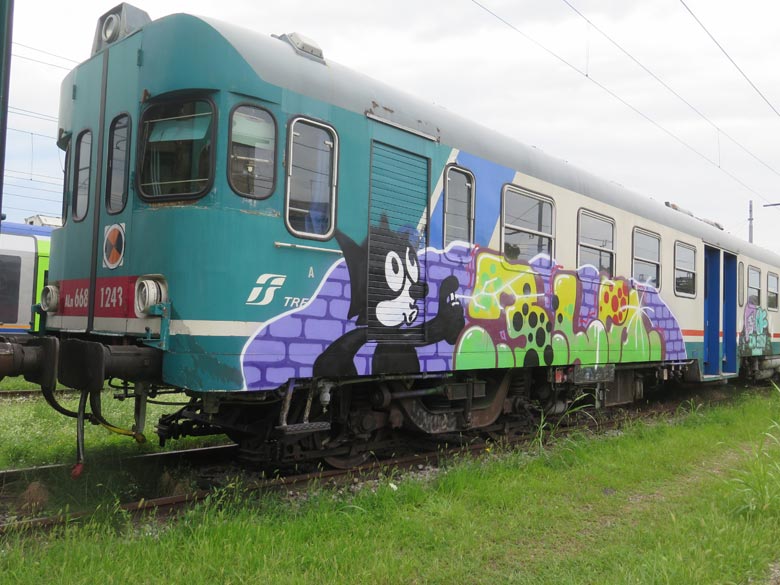 Does the piece dictate the colors or do the colors define the piece? Do you plan the color schemes beforehand or do you make them up based on the materials you have at hand?

Usually colour of surface dictates the colours of piece. But I definitely sometimes paint with what I have.

You paint from rural locations as well as subway tunnels. What do you like about these contrasting places to paint?

I love painting surfaces with features, like windows or doors, with cables if it’s a tunnel. It’s looks more aggressive.

I prefer to stay lowkey. There’s a lot of stuff on the internet without mine. I love the classic way to publish pieces – magazines. 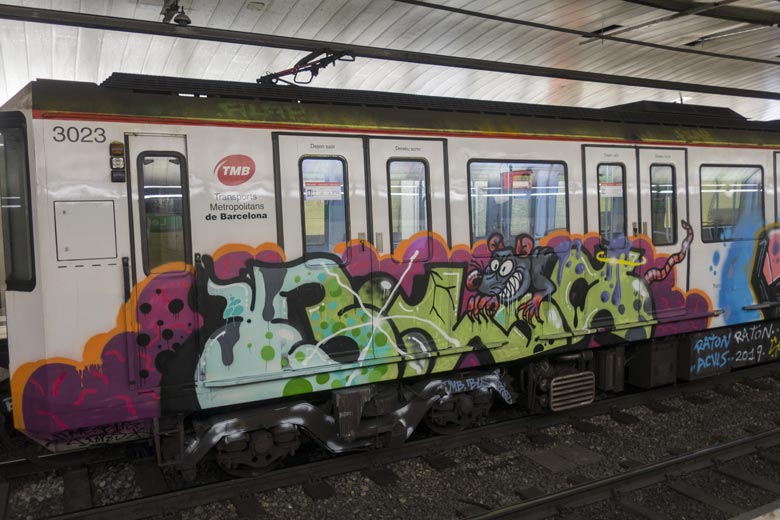 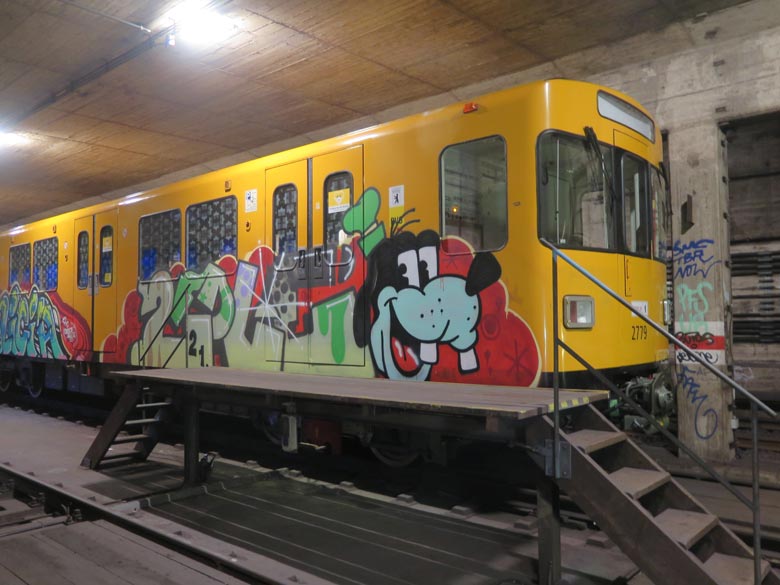 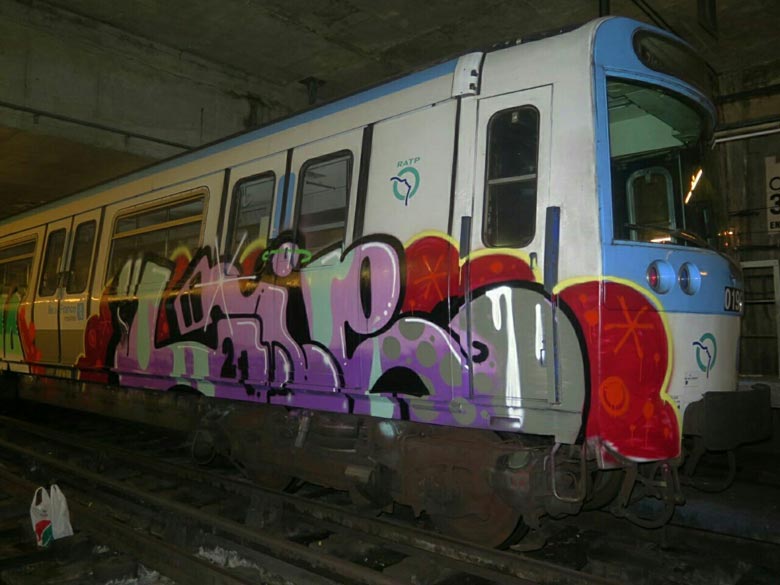 “It was emotionally stressful for me and I went into some kind of depression for a few years. My mother brought me some acrylic paint and brushes to try to cheer me up in some way. I did my first canvas. It was a train, I don’t know why”

Can you tell us about the other sides of your artistic output?

In 2010 my girlfriend finished with me. It was emotionally stressful for me and I went into some kind of depression for a few years. My mother brought me some acrylic paint and brushes to try to cheer me up in some way. I did my first canvas. It was a train, I don’t know why, maybe because I like atmosphere spot photos. It was my way for escape from reality, like therapy.

I experimented with brushes a couple of times, but it wasn’t really serious. Over time I did more. Some of my friends told me that the work was good, and I should do more. After, I tried oil paints. And I started to like it. My best period of painting canvases was in Barcelona. I had a goal of painting ten canvases and doing an exhibition, but it never happened because I had to move to my home country due to some family problems.

Recently I’ve been working a lot. Big cities absorb your time so much. I don’t have time for everything. I spend my free time on graffiti. I’d like to start painting canvases again. I like portraits. I’d like to learn how to do portraits because it’s really difficult. It only takes time. But the older you get, the less you have. 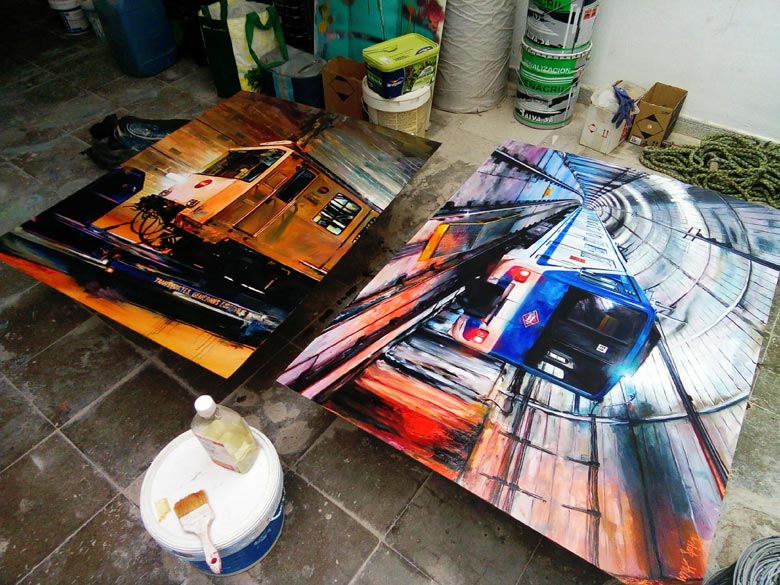 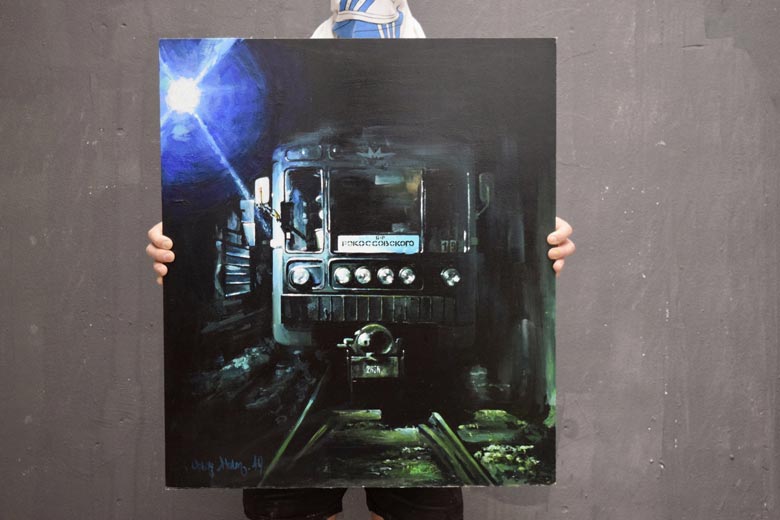 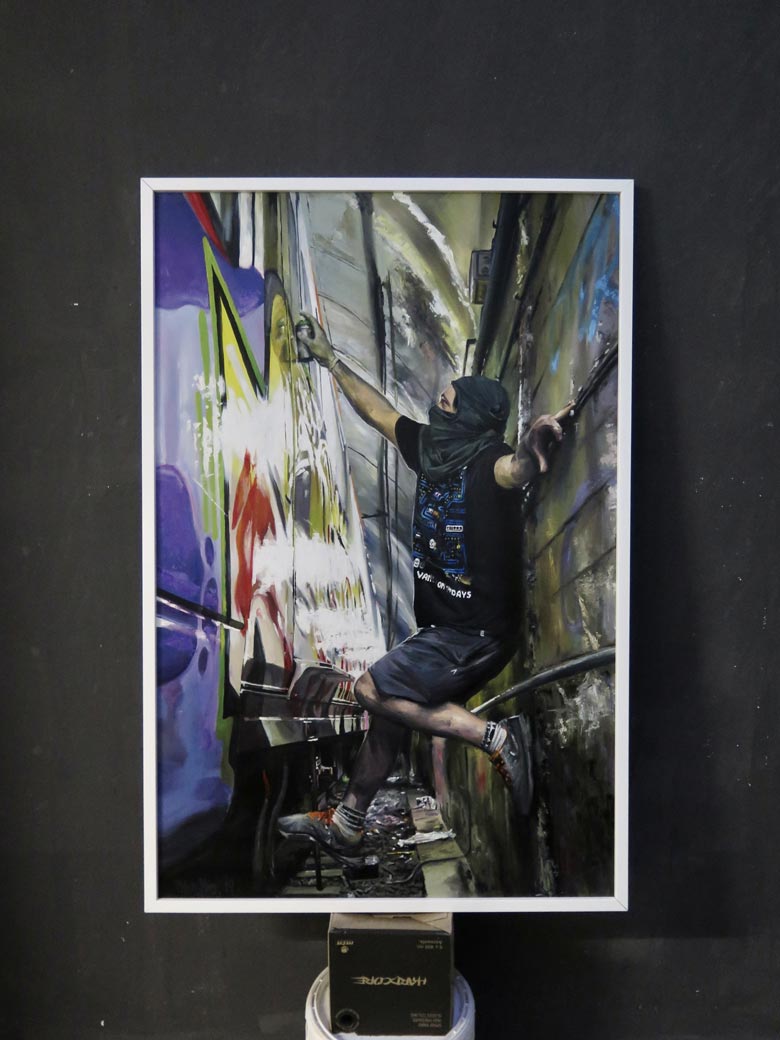 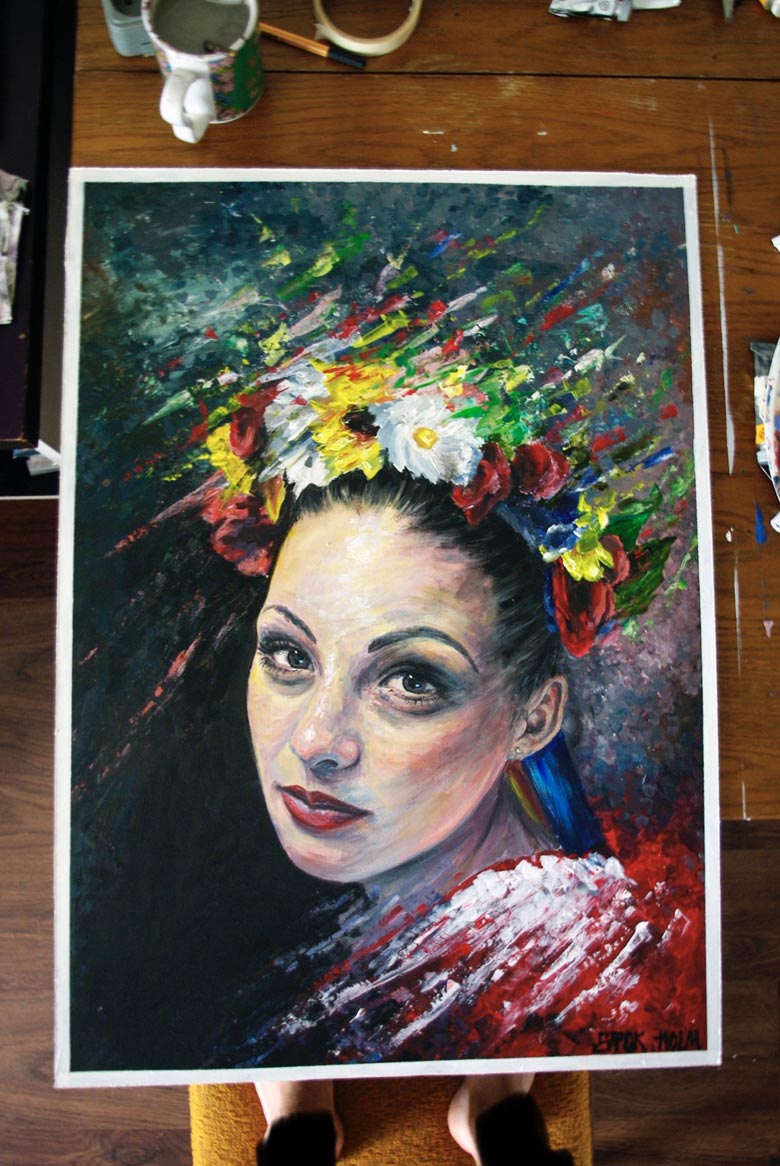 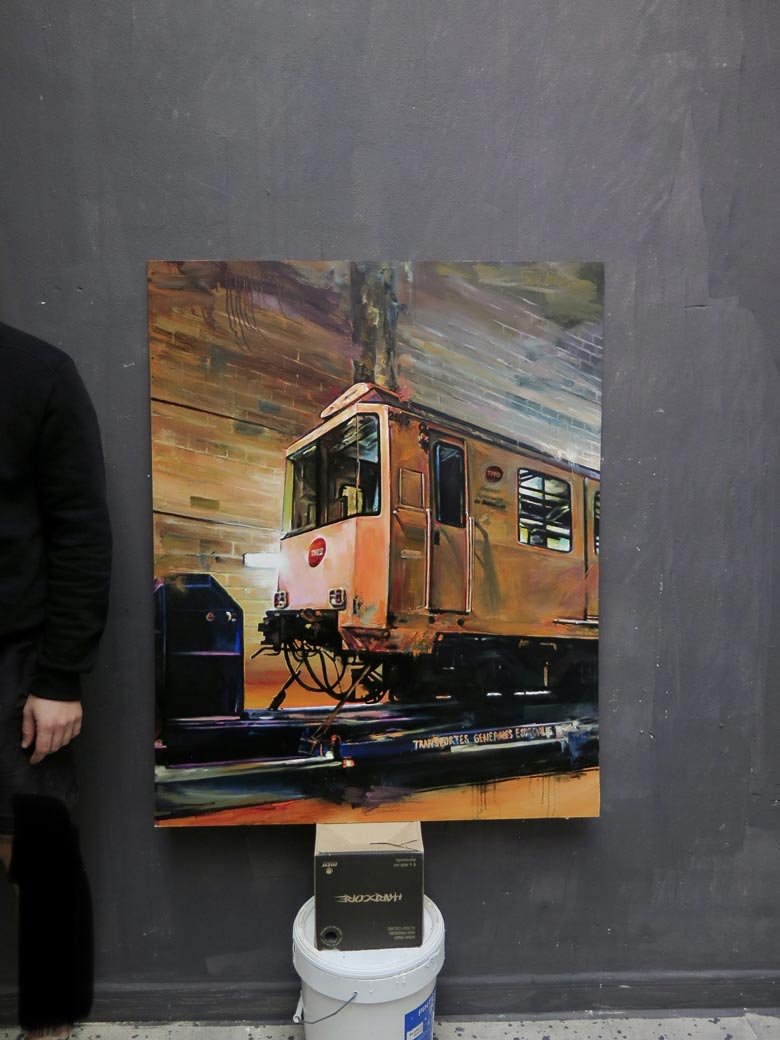