LONGEVITY AND FRATERNITY IN NORTHERN ITALY WITH THE MURDER LINES CREW 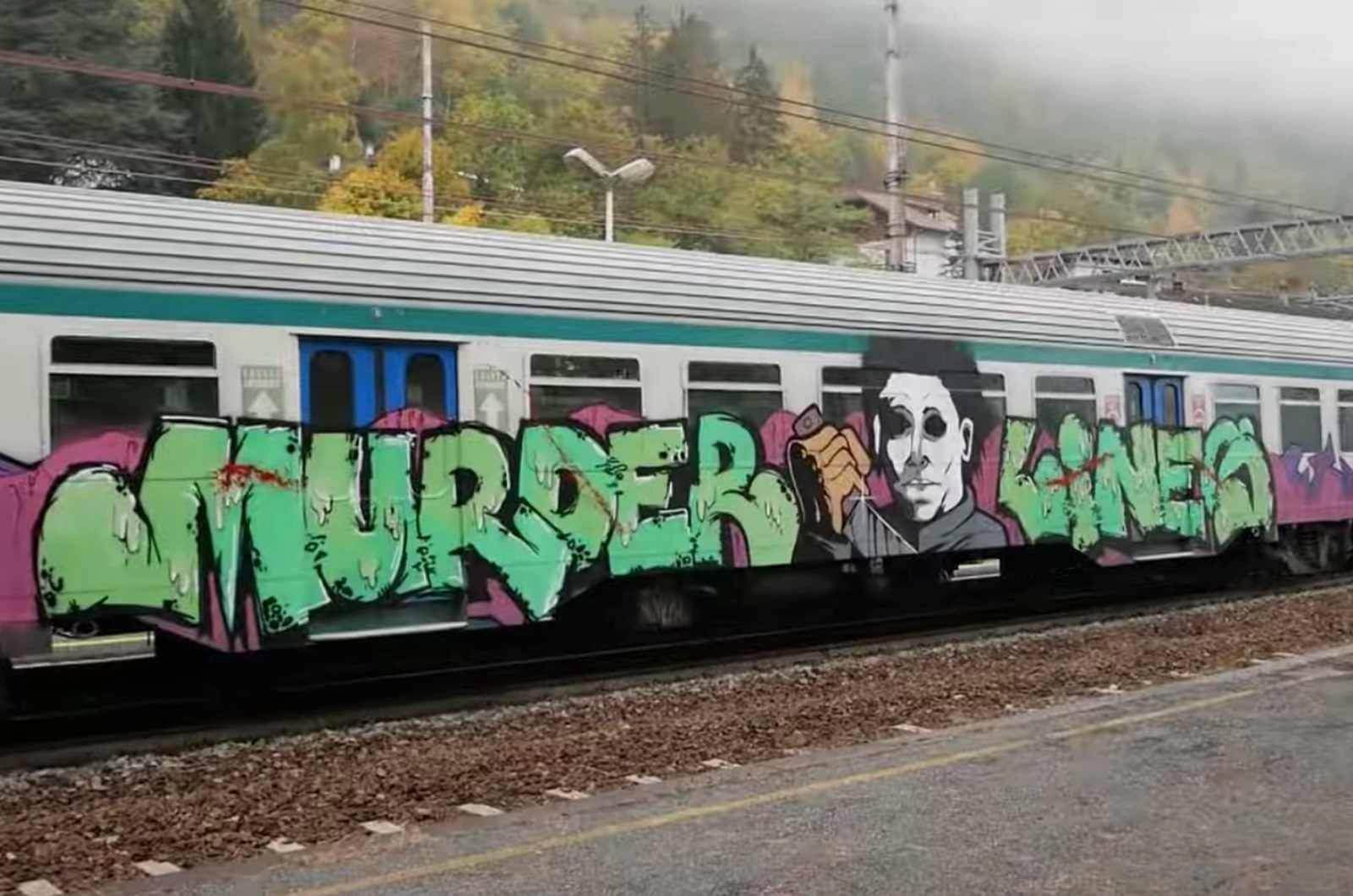 The ML’s, also known as the Murder Lines collective, are a crew from Northern Italy who specialize in high-quality productions on the emblematic turquoise trains that circulate the region. Having caught the première of their latest video on drips.fr, we got in touch with representatives from the crew to find out about what is behind the impressive action captured in the documentary.

Can you give us a little background of the crew?

The crew was funded already more than 20 years ago by 4 guys living in different north Italian cities, thanks to the internet that back then was starting to connect people more and more, the first graff websites and mIRC chats.

After finding out we enjoyed hanging out together even more than painting, the group started for real and kept up till today. The philosophy has been and still is, if we like to chill, than we can also go painting.

Friendship and quality time beside graffiti has always been the most important thing to us, despite the fact that the crew members are all scattered around northern Italy. Obviously getting older, the opportunities to see each other in person have been greatly reduced, but we are still linked by a deep feeling given by the shared past and common experiences, which are becoming increasingly rare and therefore intense. 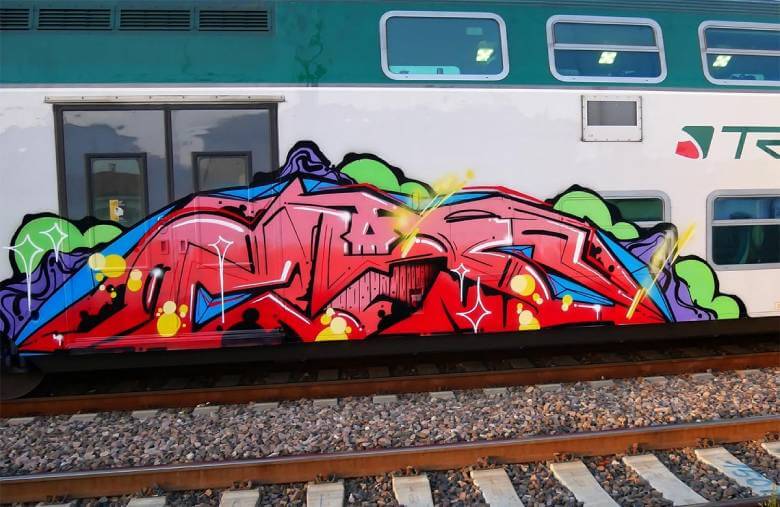 ‘…we love group work to produce themed e2e’s when time is limited, or to produce big and paint consuming productions that give us the opportunity to express the strong harmony that binds us.’

The group got bigger with the time passing by and kept very busy till 2010 more or less. That year was kind of a turning point: most of us had to start dealing with duties related to age, so while some going as hard as before, others started painting other surfaces more often, others slowed down or quit.

2020 represented another pivotal year: while the pandemic raged, three new members joined and a few old ones painted like never before, in terms of quantity and quality. The results are shown in this short video filmed between March and November 2021. It’s just a part of what the crew has produced: some of the footage wasn’t good enough, in one shot the train went too fast and you couldn’t read the piece, some panels got lost. So this is the result of what we managed to shoot and thought would be worth sharing.

The video stands out for the elaborate pieces, implying that there are good conditions for painting steel located by the Metal Lovers crew. Is this down to advanced technique, lengthy preparation or a combination of the two?

Italy is considered to be train bombing paradise worldwide, but with the time passing by, and the yards getting all the time more exploited by new generations who give zero fucks, situations are slowly reaching European standards. In any case, it’s probably a combination of the two: with 20 years of experience, most of the pieces the crew is able to pull off are quite high quality, but none of the ones featured in the video took more than 40 minutes.

Are the pieces painted as a collaboration between various writers?

The fact we almost always paint the crew name, doesn’t mean the pieces are collaborative, most of them are the result of individuals, and very different stylistic approaches are easily recognizable. Nonetheless, we love group work to produce themed e2e’s when time is limited, or to produce big and paint consuming productions that give us the opportunity to express the strong harmony that binds us.

How often does the crew paint steel?

Obviously, in 20 years many things have changed and “normal life” takes over good ol’ habits but most of us managed to find a balance between the different aspects of life, which allows the crew to stay up. There’s no “business plan”, no goals to set, no standard to meet. If we want to talk numbers, independently from the age of the crew mate, some paint three times a week, others twice a month, everyone gives what he can to the team. What’s important is that all of us still want to keep this collective name up and alive.

What are the other important train crews of your region?

In our region the graffiti scene has always been very “lively”, despite various waves of repression by the authorities over the years: as everywhere, some produce not so much but focus on style, others bomb without paying much attention to the study of letters, few are able to combine both. We won’t mention writers or crews in particular, because we like to do our stuff without looking at what others are doing.

We have always been perceived as loners, painting with a very selected circle of close friends. Over the years this thing has further amplified, especially due the generation gap making relationships even more difficult. But fortunately we’re not the only “dinosaurs” surviving, some other crews as old as ours are still very active making us feel less old! 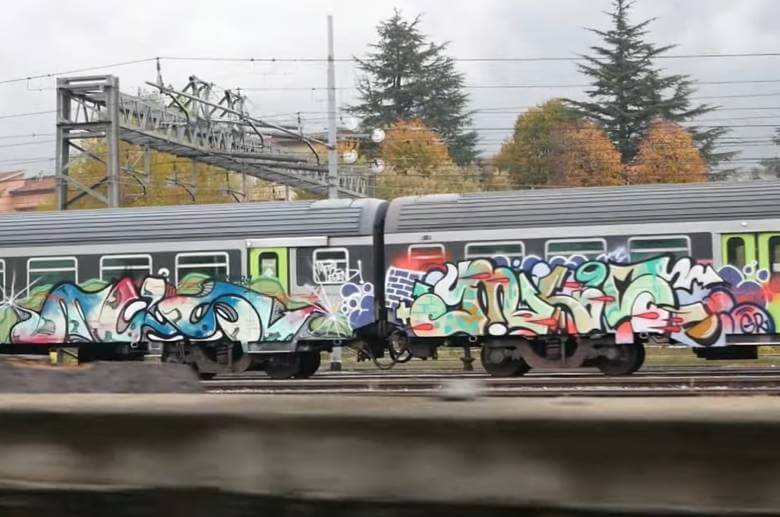 ‘We have always been perceived as loners, painting with a very selected circle of close friends. Over the years this thing has further amplified, especially due the generation gap making relationships even more difficult.’

When were the pieces in the video painted?

All the pieces in the video were painted after the pandemic started, in 2021.

What areas of Italy do they travel through?

We are not “professional travelers” like new generations, but try to keep our activities where we can experience the results in everyday life, so the best place to spot our pieces is in central-northern Italy. 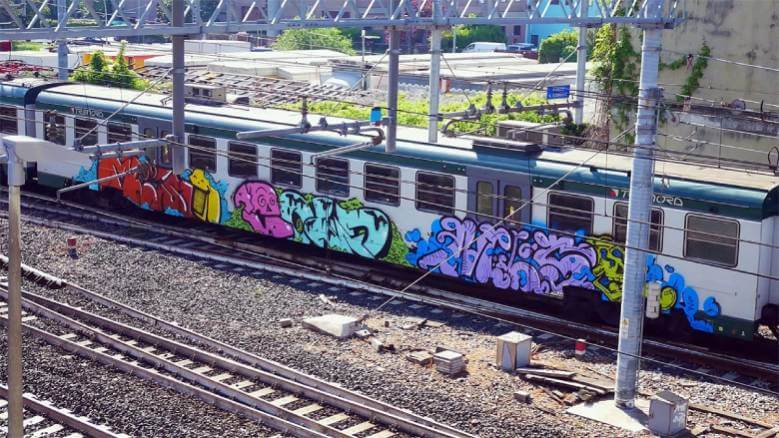 Some of the locations appear idyllic as the pieces run through the countryside. Has the crew developed more an appreciation for rural Italy through painting missions?

Italy is a small and quite overcrowded country, and in the last 40 years has been heavily and messily urbanized. Still, after leaving urban centers, it is easy to find a wheat field between a city and another, eventually in some polluted outskirt, that can work as a nice background for trainspotters. Also, in our group no one is based in big cities, so these have always been our scenarios. 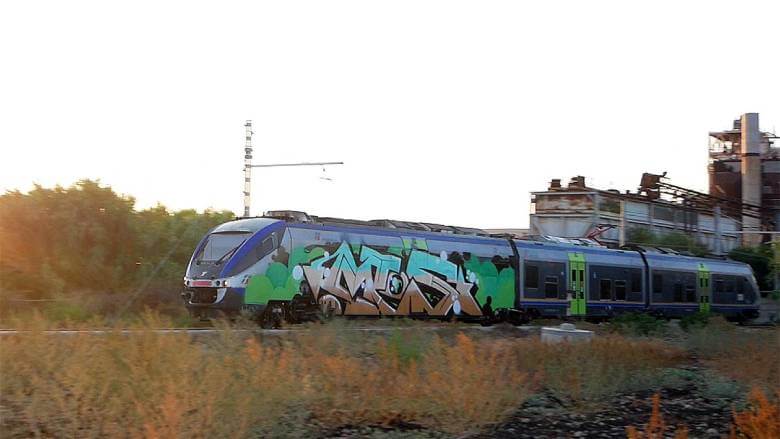 There are plenty of shots of the trains in traffic. How long can painted trains circulate for?

It depends a lot on the line you paint; let’s say the average train runs around a week, that means some lines and some models keep running painted for two weeks or even a month while others disappear the next day.

Finding logic in things, in Italy, is always a challenge, let alone in railways’ organization, and the buff schedule doesn’t represent an exception. Sometimes trains run so much that you get tired of seeing them, others get cleaned right after the first run, other times only codes, windows or other unpredictable parts get erased!

Older models such as the “pannellato” or the dear and old “littorine” always run for longer, because soon they will be scrapped and replaced by new and less attractive models.

Check the Murder Lines – Graffiti in Italy video in full below courtesy of Drips.