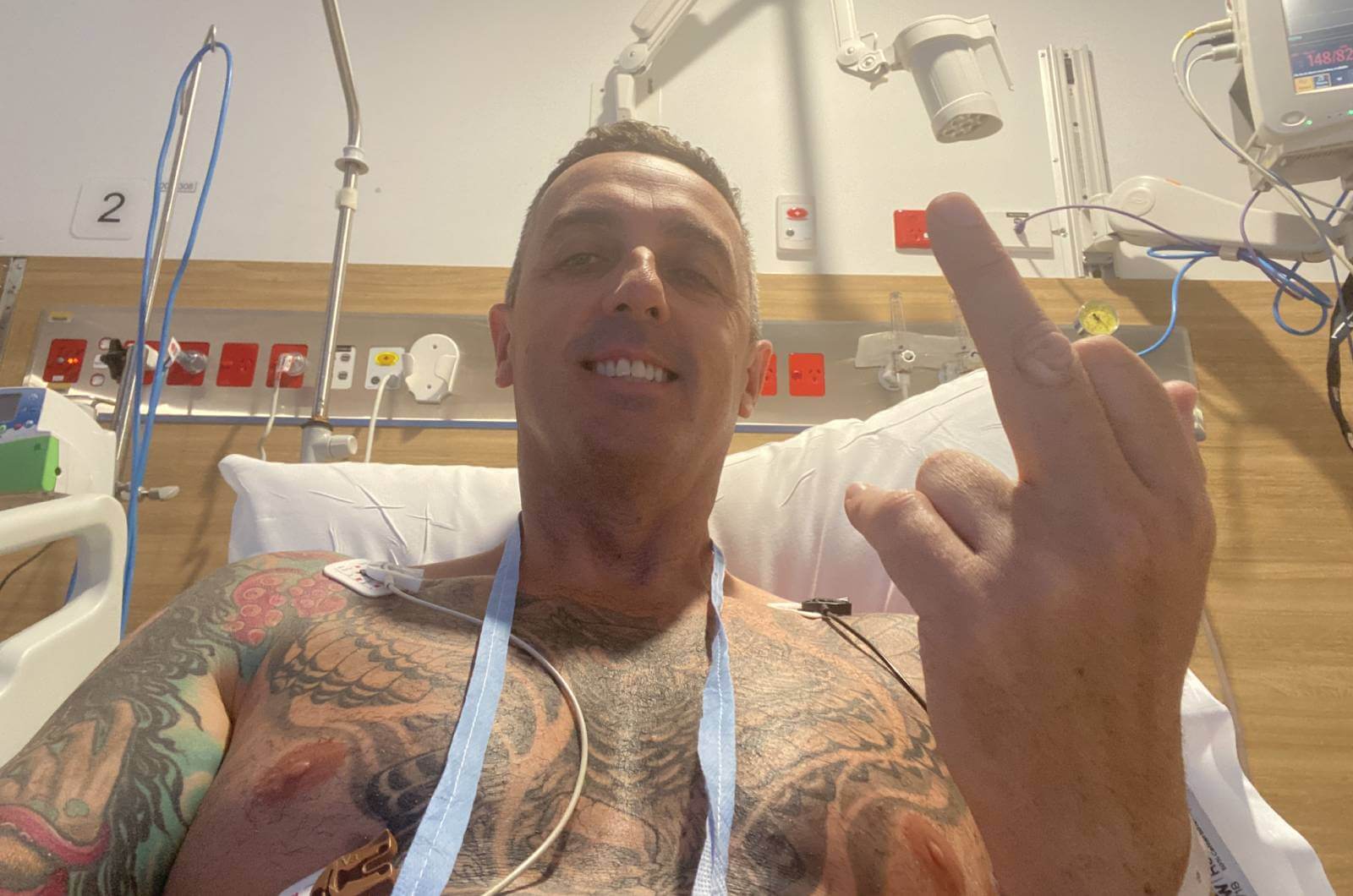 Teazer is a veteran graffiti writer from Australia, whose passion for the artform has taken him all around the world to paint with some of the biggest names in the scene. He was always a competitive guy and that nearly proved fatal, as he explains in this interview.
After one failed attempt to contact him owing to intense flooding in New South Wales, MTN World got hold of him on a video call to hear about his dedication to graffiti and the consequences his lifestyle has had on his body.

So where are you based, Teaz?
I’m in Byron Bay, near the Gold Coast. We’re having natural disasters and shit. My car got written off. The water actually came up about three meters. Some of the houses nearby got wrecked.
It’s just been about survival. Everything was cash only, there was no petrol, no food. Luckily, we had a few rations. Crazy times. 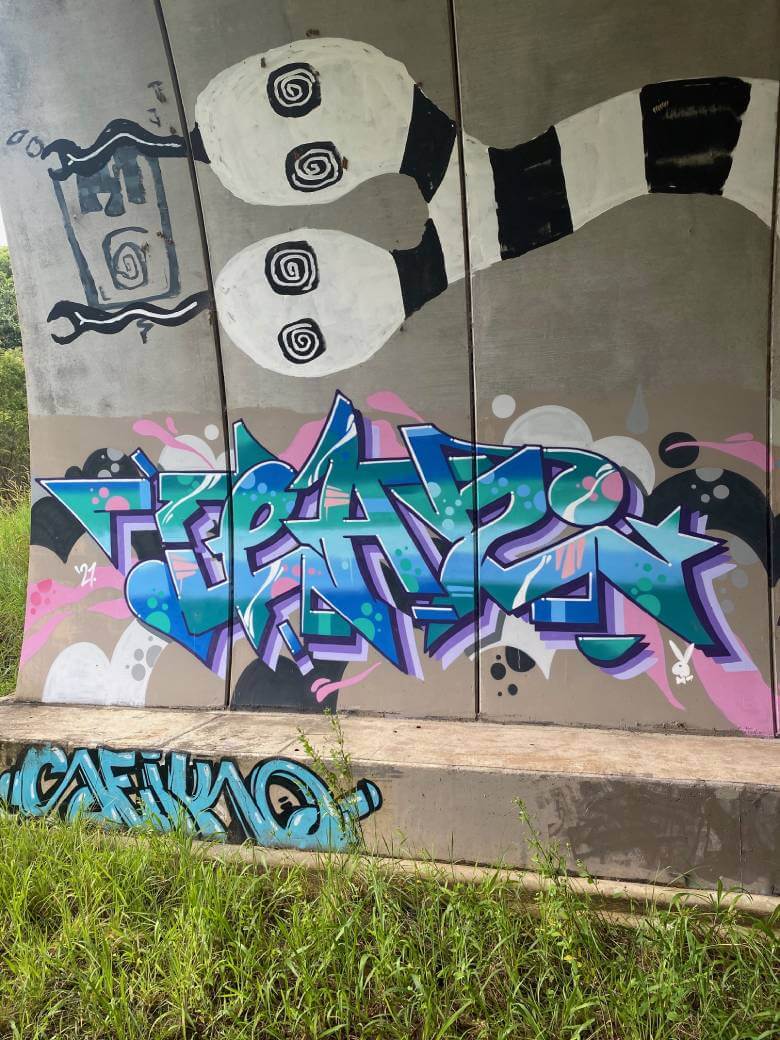 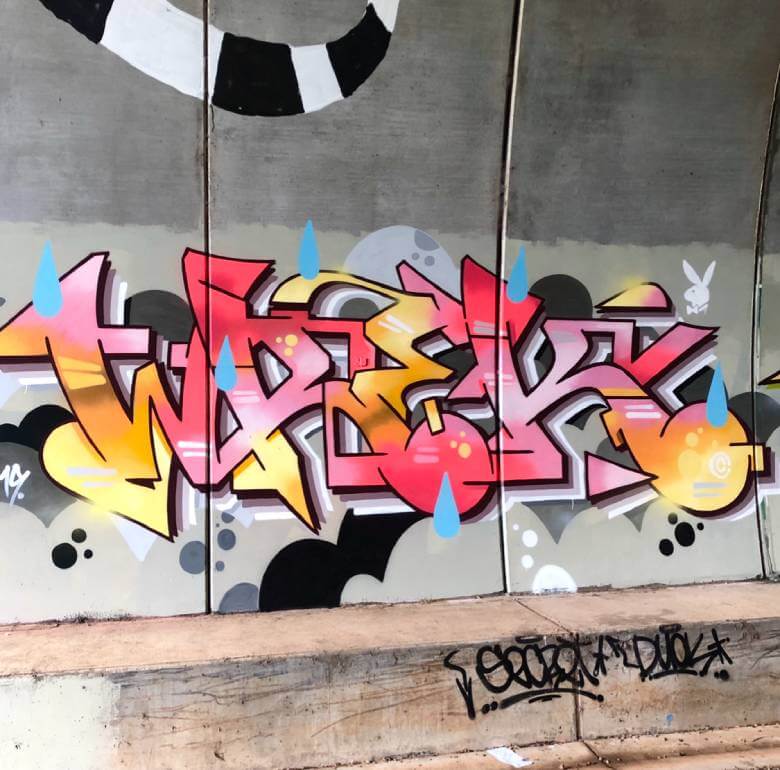 “So, I went away and thought about doing a heavy metal detox. Avoiding stress, always running on adrenalin, drinking a lot of coffee. Driving like a maniac. It’s just the competitive nature that I’ve got. I had to rethink a lot of things.”

You’ve travelled quite a lot yourself, right?
I love travel and I have to paint wherever I go. I could never go on holiday and sit on a beach.

Do you paint much?
Compared to most people, I paint a lot. In the last couple of years I’ve slowed down, but I’ve still done about 30 pieces. I’ve been enjoying doing the productions with the character on top. Those square format pieces. Instagram has changed how I see graffiti.
I’ve been doing a tattoo apprenticeship too. Graffiti and tattooing are a vehicle to open doors and take you around the world and introduce you to people. I never would have dreamed as a kid that I would end up meeting some of my heroes of graffiti writing. 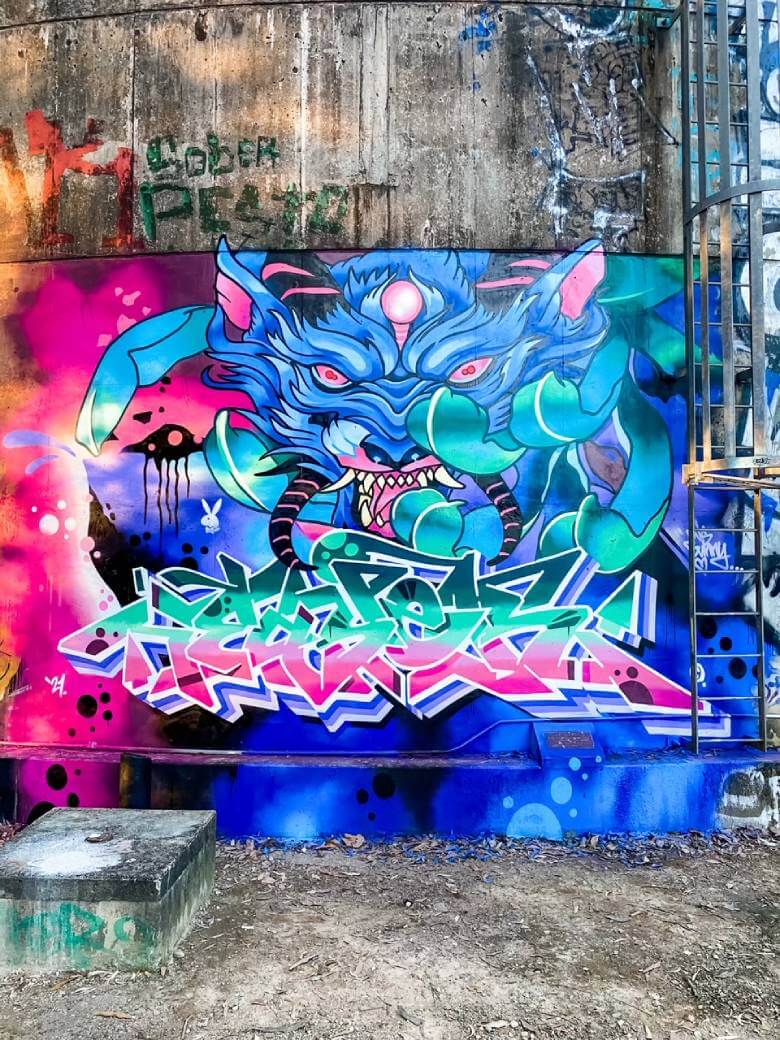 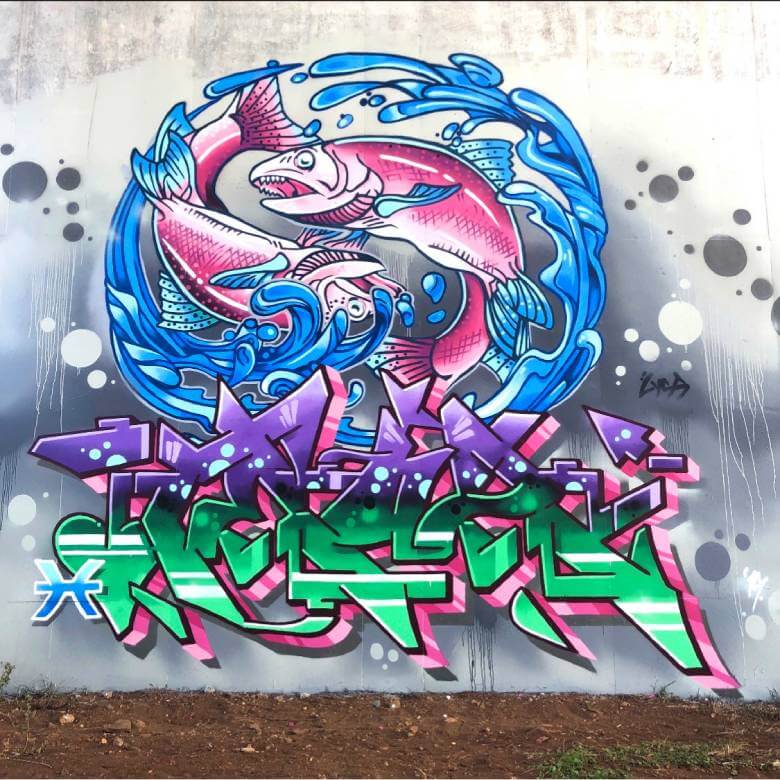 Anyone stand out for you?
Yeah. In 2011 I was in Europe and caught up with Can Two, and stayed with him for a couple of weeks, we did a couple of productions together. That was one of my all-time favourite moments of my career.
Also Bates. I went to Malmö in Sweden and Bates hooked up this wall near the harbour on the train tracks. We had these old, vintage trains going past by the water. It was mind blowing. 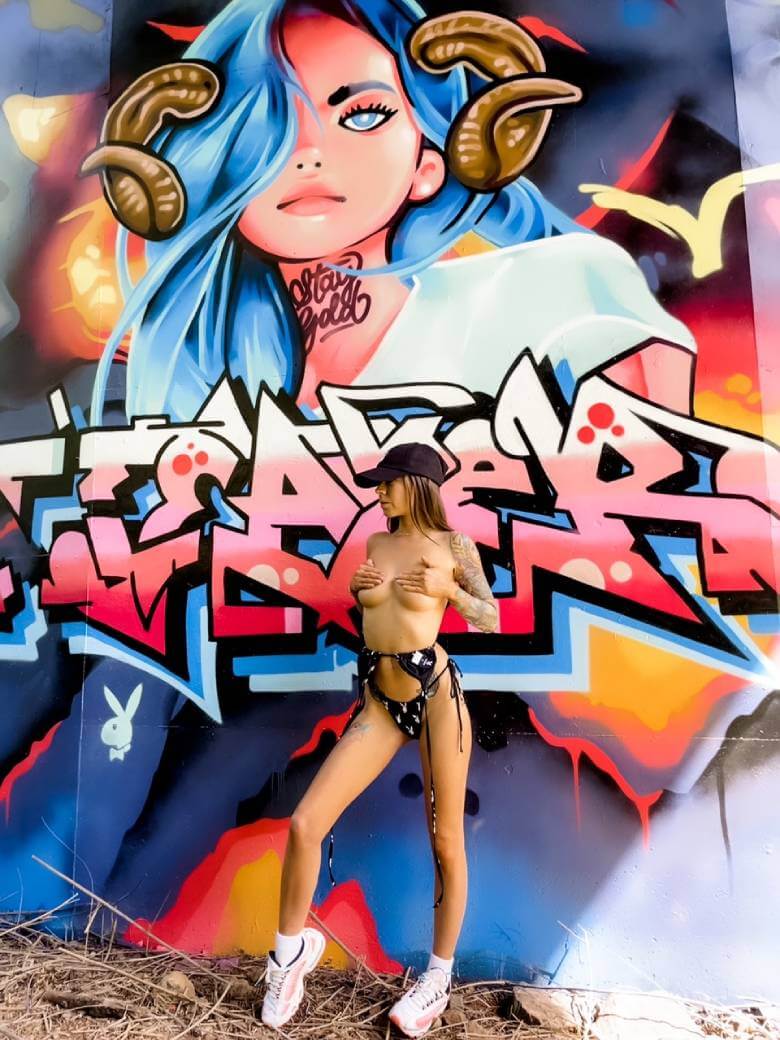 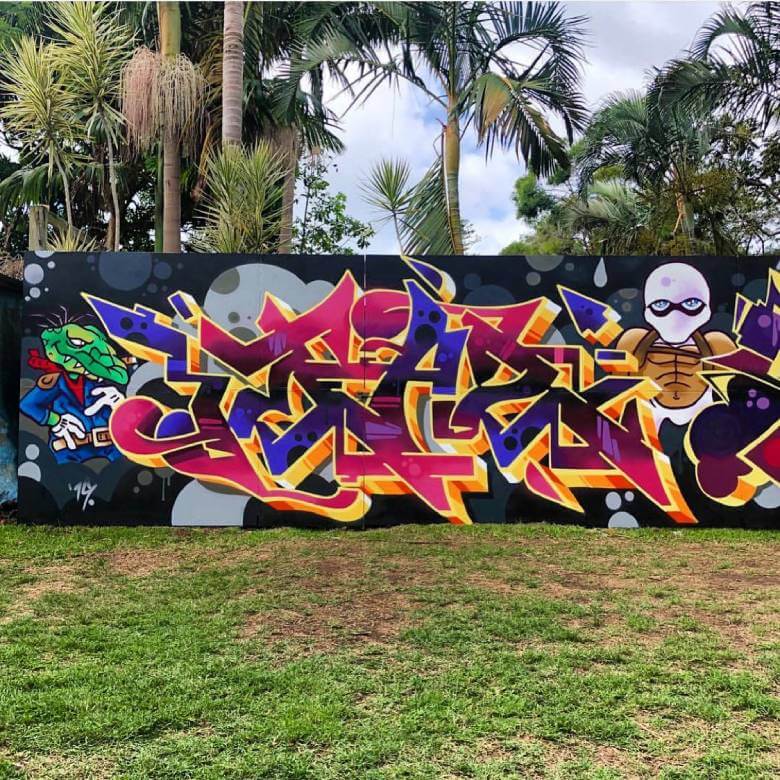 Who were your local influences starting out?
I used to paint a lot with kings like Atome and Dmote. Dudes like Puzle, some of the old-school kings from Melbourne like Paris and Peril. But I always looked at Europe. It was crazy, there was some type of energy there. People were doing sick productions and pushing the craft. That was what I was always about.
I’ve had some mad painting partners over the years. Like Spice, the old-school queen from Australia. She taught me heaps about rendering backgrounds and characters and shit like that. She had a more sophisticated sense of color.
Painting with Atome for years made me focus on my letters and sketch more. Let the letters take precedence. 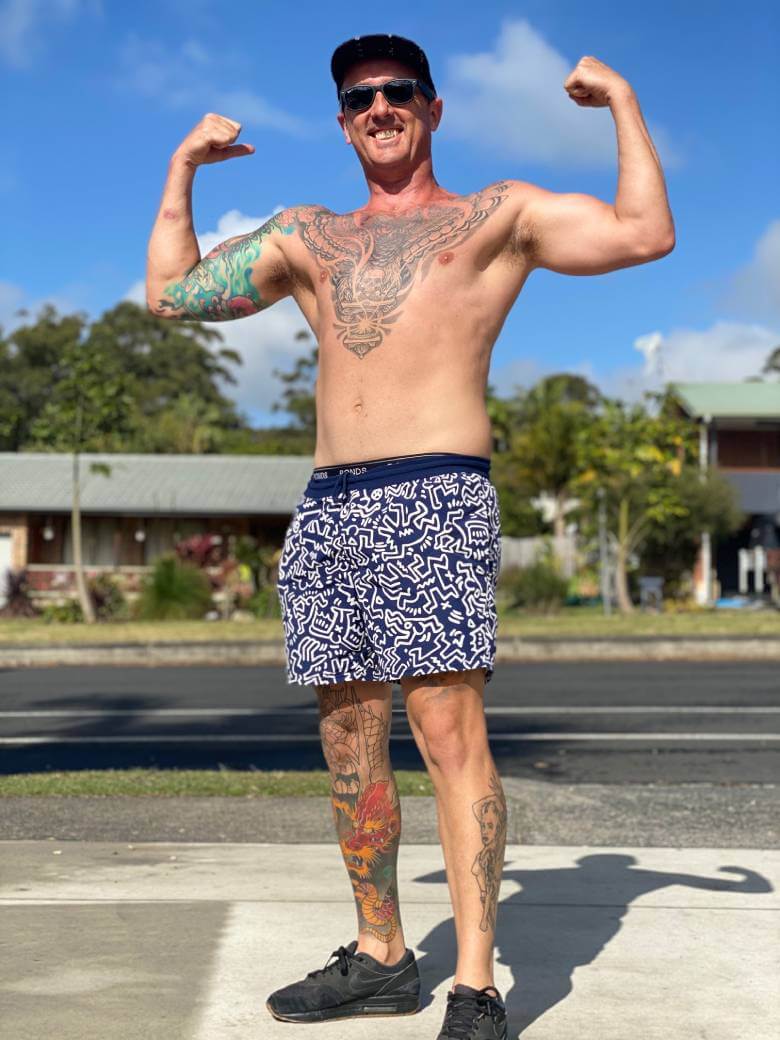 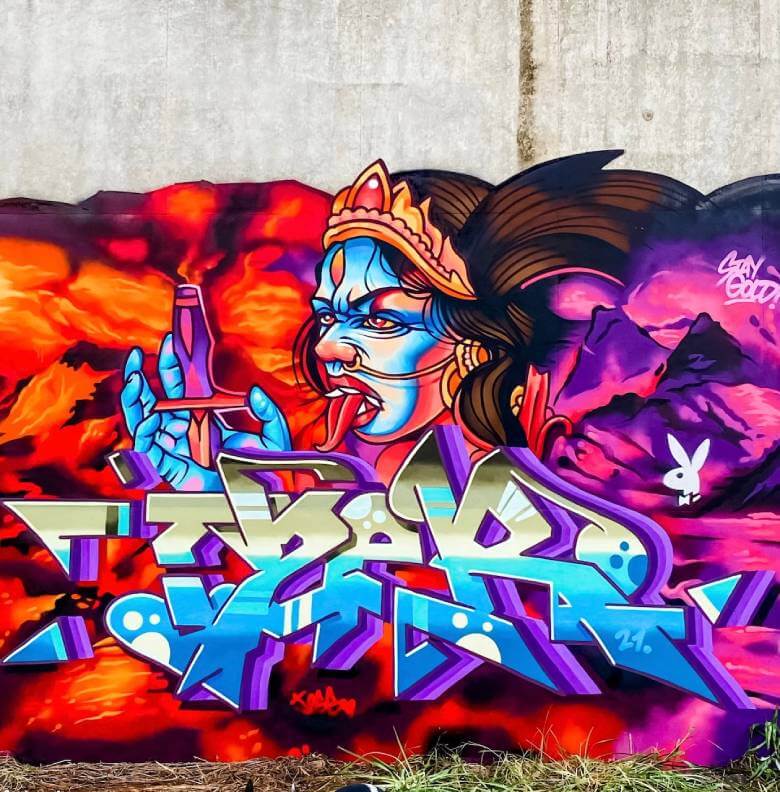 “Now I’m in my forties, I paint for myself. I don’t have shit to prove. I’ve chased all the fame and accolades, but it’s never-ending. I was never happy. I don’t know what type of toll painting has taken on me.”

Tell me about what you’ve been through over the past few months.
I’ve had a pretty hectic time in recent years. Three years ago, my wife and I separated. That destroyed me. Since then, I’ve been trying to get back on my feet.
Four months ago, it happened. There’s a lighthouse in Byron Bay where I go running two or three times a week. I’ve always looked after my fitness. I’m 20 years clean and sober and helps me regulate my emotions without using drugs or alcohol to wind down.
So, one day I was running and the whole time I thought I had heartburn. I went and got some Anticol and headed to the gym like I usually did after a run. I’ve always gone a bit too hard. With painting, training, with life in general. I started to get a bit dizzy and realized I was in trouble, so I went straight to the hospital.
When I got there and said I had chest pains, they rushed me through. I was in quite a lot of pain at that point. I had just made it to the hospital in time.
They test for troponin enzymes in the blood if they suspect a heart attack. A healthy level is 60. Mine was 2000. They told me I’d had a major heart attack. I was like, “What the fuck? It wasn’t even that bad.”
I ended up in hospital for six days. They pumped me full of morphine and valium and did heaps of tests. It was a SCAD: a spontaneous coronary artery dissection. So when I was running to the lighthouse, an artery split under pressure. It’s extremely rare. My birth mother had died of a heart attack at 55 so I was shitting myself. I felt so sketchy once I found out what was wrong. I’d always taken my body for granted.
Like I said, I’ve been clean for 20 years. But back in the day, I was smoking weed at 12. Party drugs hard out til I was 25. I don’t know what damage that did. Then there’s the heavy metals in paint, preservatives in food, whatever they spray crops with.
I’ve painted a lot in the last 20 years. I’ve spent seven days on walls. A new one every fortnight. Always striving, but I’ve always felt a lack. I always wanted to prove myself, especially in my 30s.
Now I’m in my forties, I paint for myself. I don’t have shit to prove. I’ve chased all the fame and accolades, but it’s never-ending. I was never happy. I don’t know what type of toll painting has taken on me. 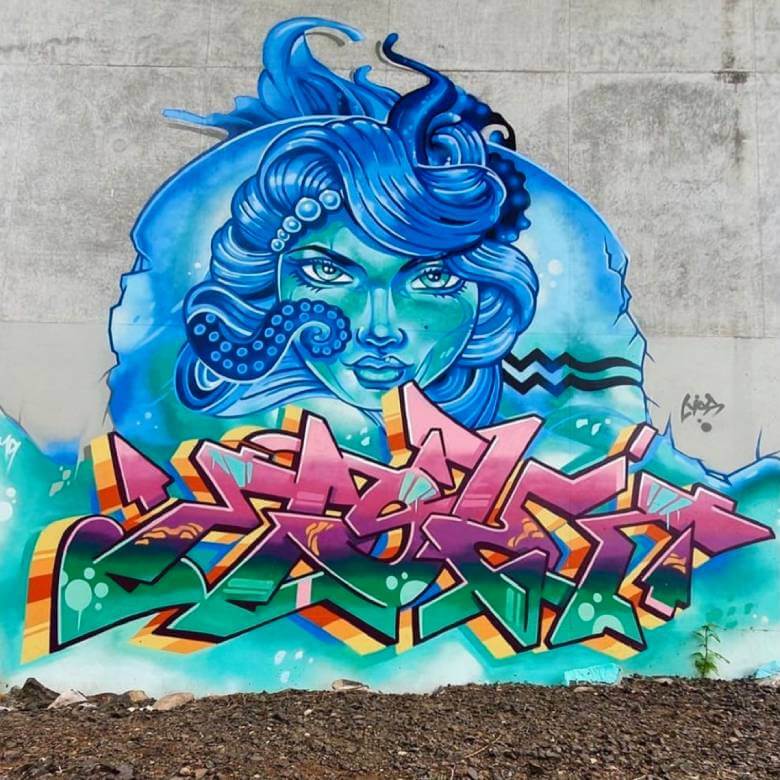 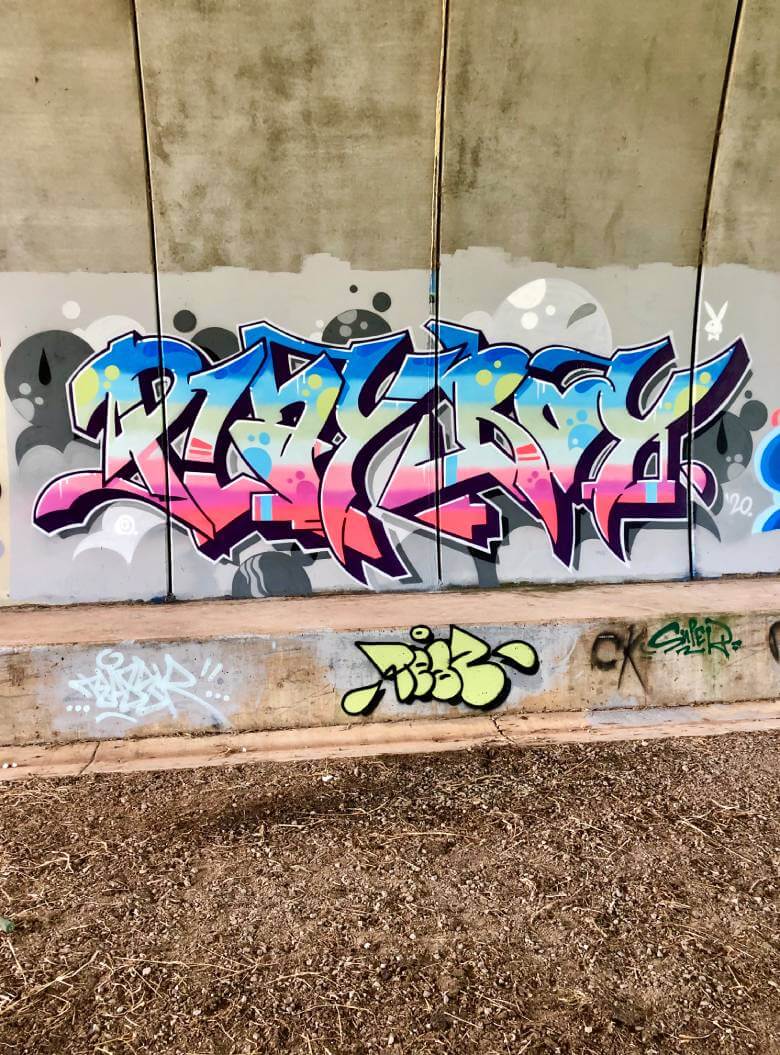 What recommendations did the doctors give you?
I’ve always had asthma since I was a kid. The puffers contain a light steroid that could have played a part. So, I went away and thought about doing a heavy metal detox. Avoiding stress, always running on adrenalin, drinking a lot of coffee. Driving like a maniac. It’s just the competitive nature that I’ve got. I had to rethink a lot of things.
It felt surreal coming out of there and surviving. They didn’t want to scare me at first, but at the end they said I had a 90 % chance of dying. I was like, “Fuck. Whoa.”
I feel like I’m still here for some kind of reason. I’m working with kids as well as painting and tattooing. I’m trying to be there more for my family. Not just chasing, chasing, chasing. Cos if not, I’ll be 80 years old and I’ll wonder: “Have I really enjoyed life in the moment?” 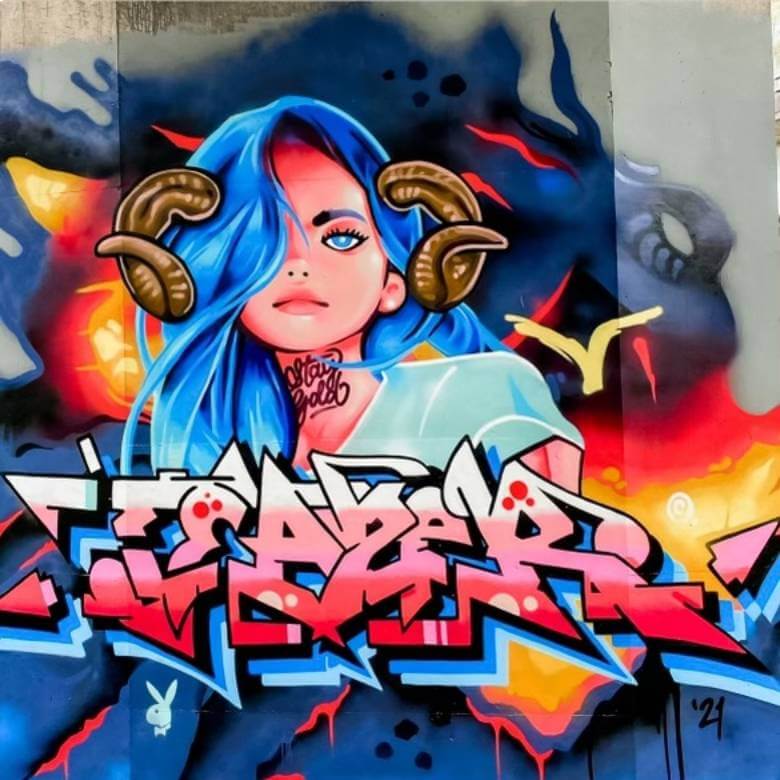 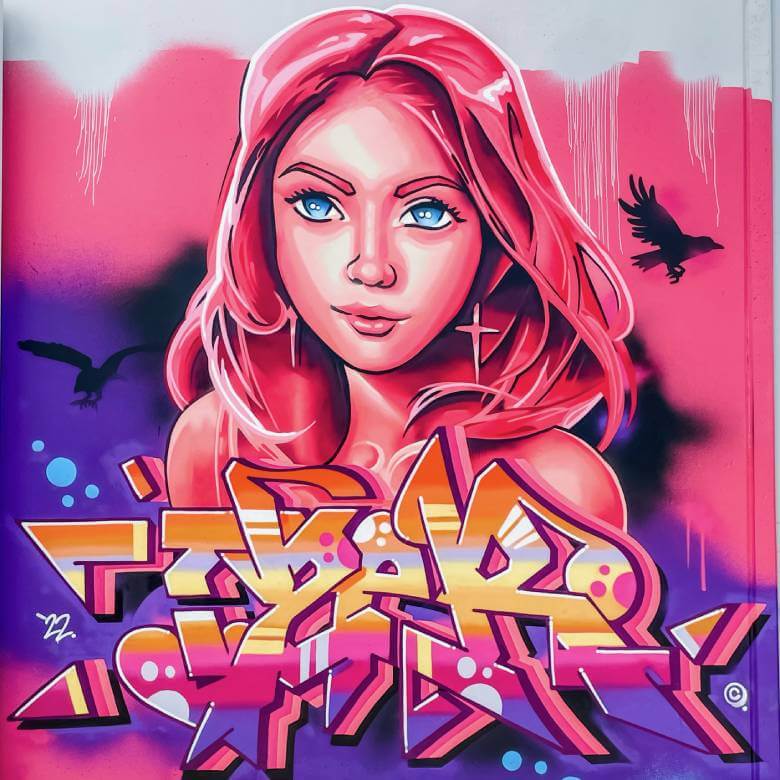 Read a report from Tim Phibs’ Surface Festival in Canberra. 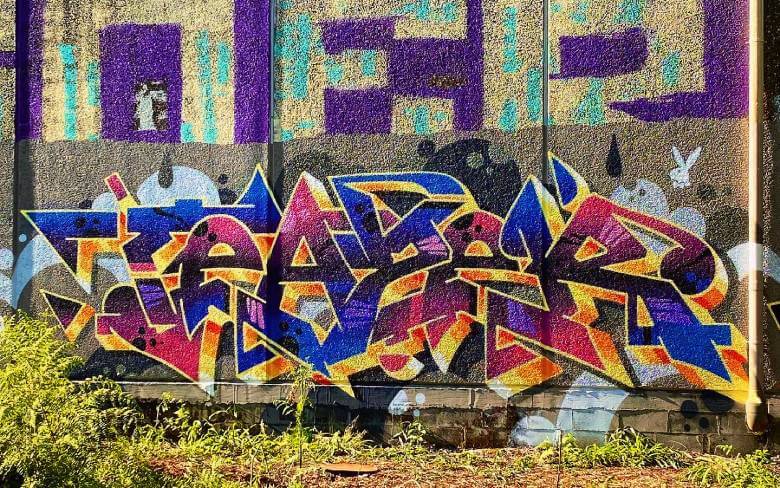