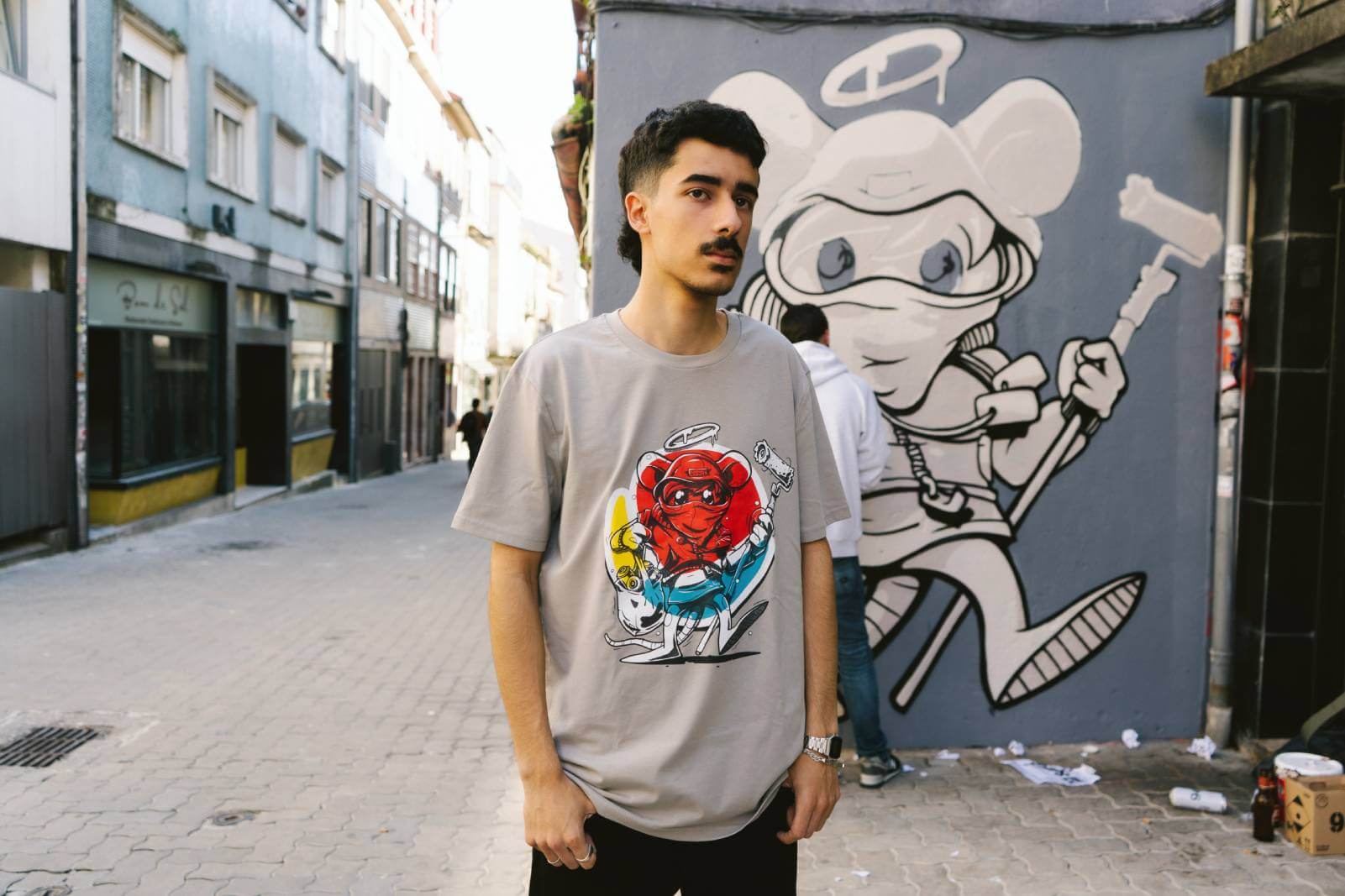 Oporto currently lives immersed in a duality between street art and graffiti. The city council has created a buff team that only respects illustrations, caricatures, geometric murals, paste ups and non-political stencils. However, any type of graffiti – from tags to the elaborate pieces – are painted over with drab colors that lull the city to sleep.

The most recent technique used to stop graffiti is hiring street artists to paint murals on walls that had previously been covered with work by graffiti artists.
To find out more about the scene in the Portuguese city, we’ve had the opportunity to speak with Mesk, one of the most well-known names in the city. The artist started painting in 2004, and he is best known for the characters he paints all over the city, with a friendly style and clean lines. 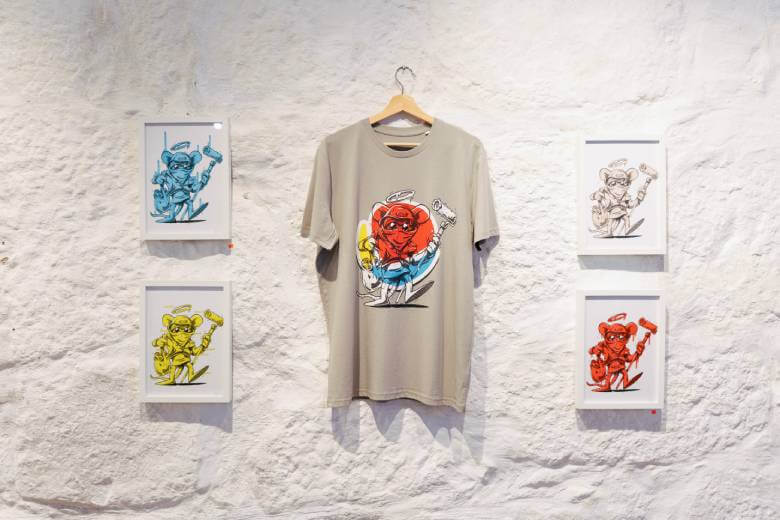 His original approach has led to work with major brands like Super Bock beer and Levi’s. He was also the artist chosen to paint the pediatric ward of the São João Hospital in Porto, among other major projects.
His characters have caught the eye of anyone conscious of urban art in Porto, which are attractive to all kinds of people whilst retaining his street credentials. 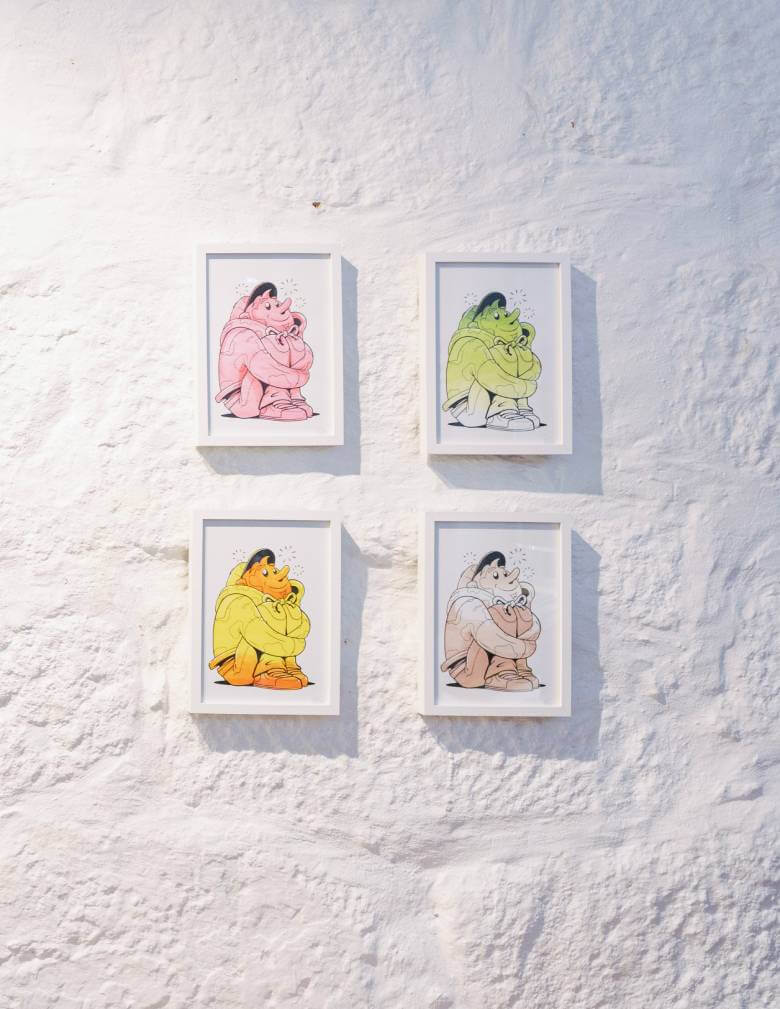 “When I discovered graffiti and street art, it became the love of my life, with ups and downs, with more or less activity, but painting on the street, whether legal or illegal, is something I will never stop doing.”

Having been part of the street art scene in Porto for a few years, what’s your opinion of the evolution of street art in the city? Do you feel the supported by the city council?
Street art and graffiti have grown in quality but no thanks to the council. From what I have seen, the city council only supports renowned artists in the city. The fact that there is no legal wall where artists can freely experiment without being arrested in the year 2022 is an embarrassment to the city. 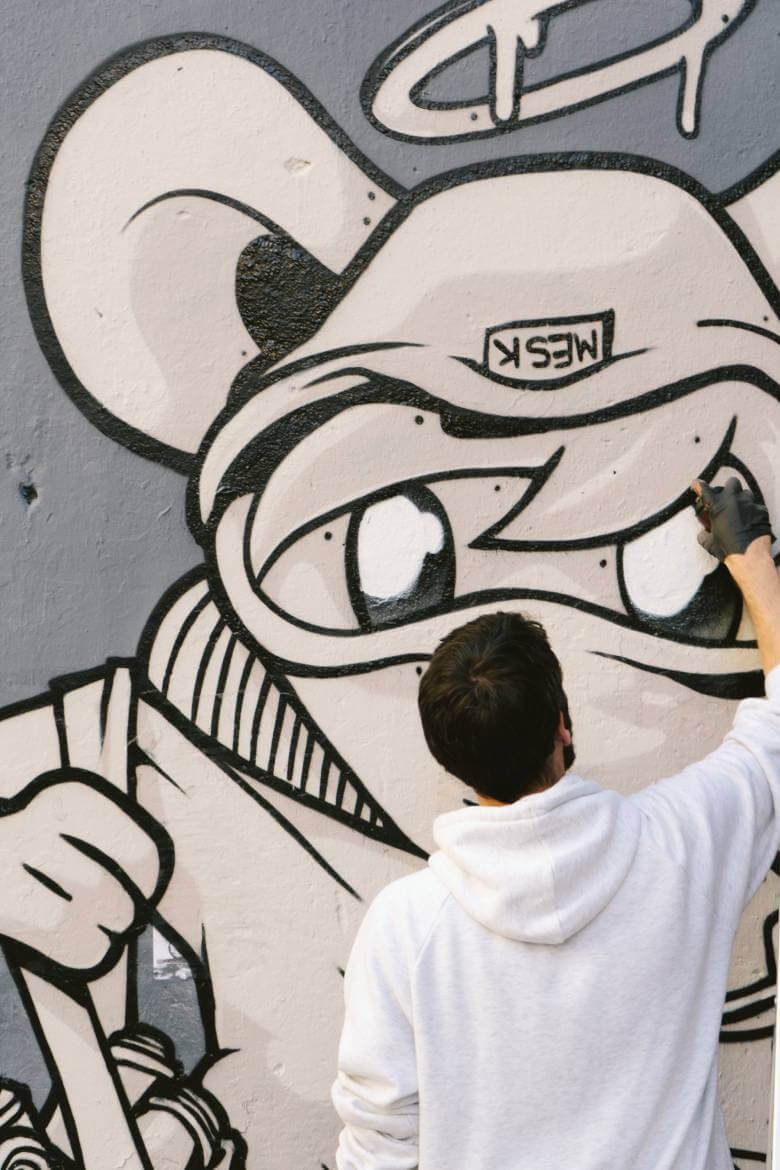 Street graffiti is constantly cleaned in Porto, but not street art. What do you think about that?
Again, it’s part of the city’s makeover plan, to clean up what the public doesn’t like and keep what makes it look young and energetic. Unfortunately, I think we are screwed as the decision about what remains and what is buffed isn’t transparent, which benefits the gentrification of the city and not the artistic community.

And what do you think about covering walls full of graffiti with the work of street artists hired by the council?
Rather than painting the walls gray or green or whatever color they have at hand, the council uses the respect between artists to remove graffiti more permanently. It’s nothing new. Instead of innovating, they copy ideas and abuse a code of honor among a community that they simply don’t respect. 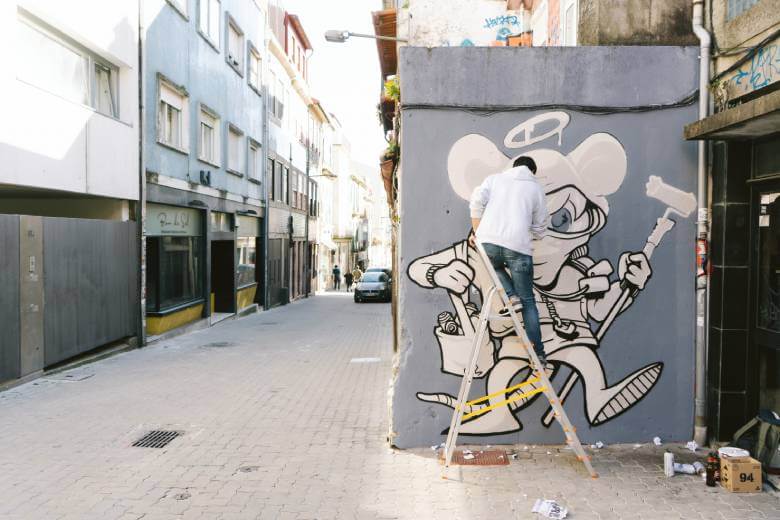 …and the future of graffiti?
The city will always be a stage, although I believe that graffiti will continue to appear on trains and highways.

Can you explain to us what is the difference between graffiti and street art for you?
Street art for me is something where the artist cares about the impact the work will have on the general public, while graffiti writers only care about the opinion of other writers. 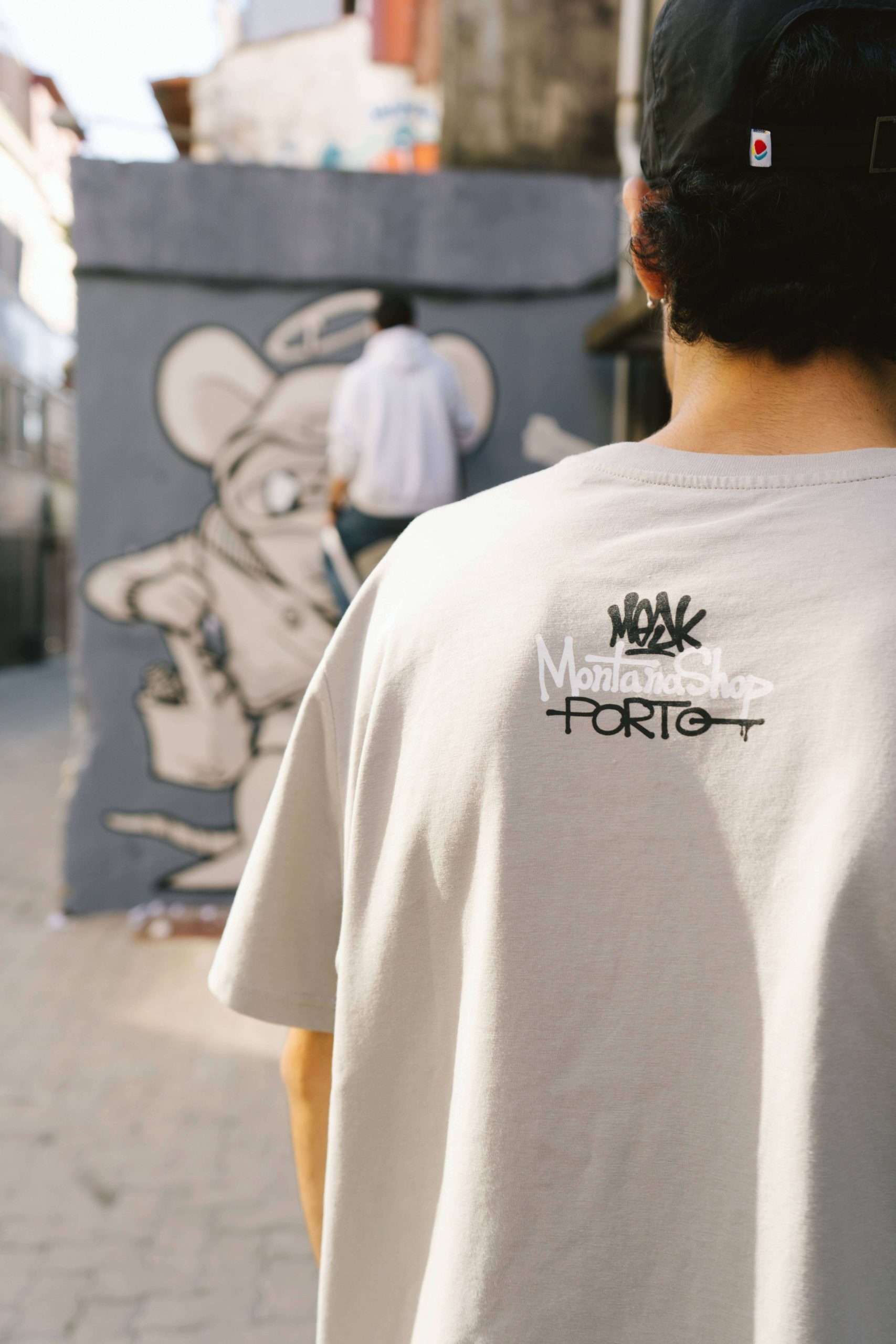 The MTN Alien is your favorite can, right?
Ahah, the Aliens remind me of the evolution of spray cans, from high to low pressure. Still today, the Skinny Pro is my favorite cap. 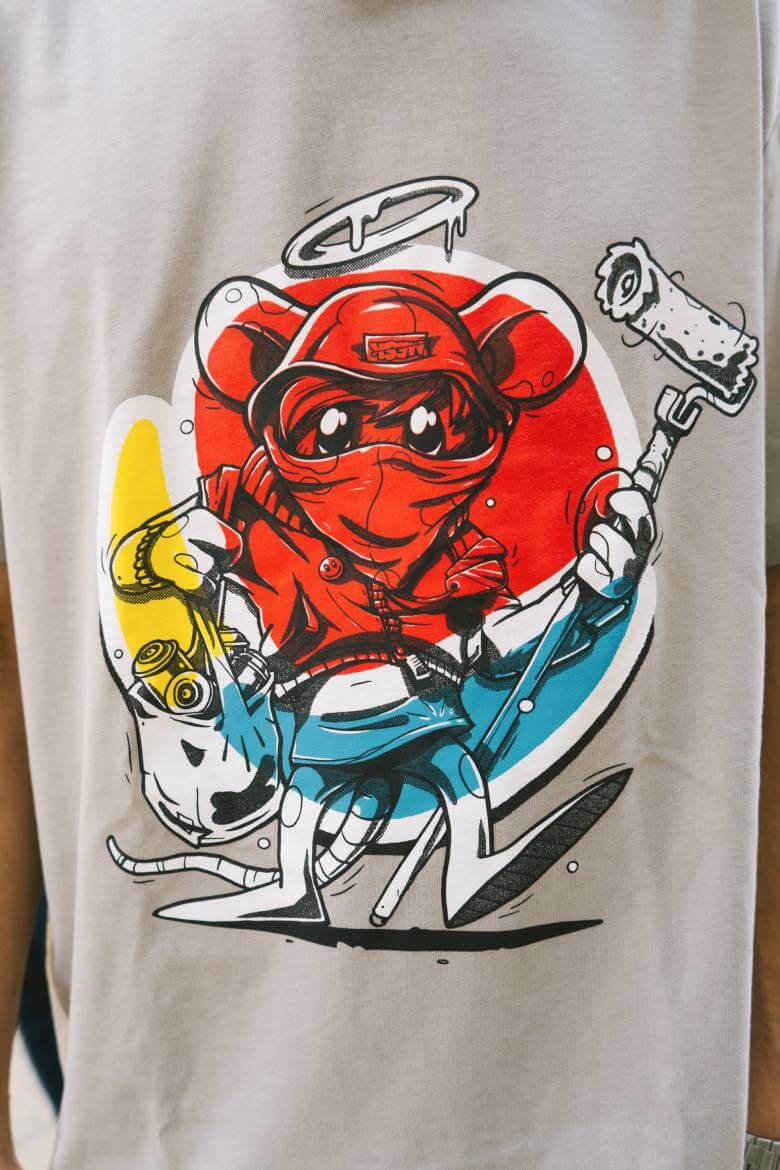 And where do you see yourself in five years? Are you going to continue doing street art or do you have other plans in mind?
I usually say that I don’t know how to do anything other than draw. It’s something that’s been with me forever. When I discovered graffiti and street art, it became the love of my life, with ups and downs, with more or less activity, but painting on the street, whether legal or illegal, is something I will never stop doing.