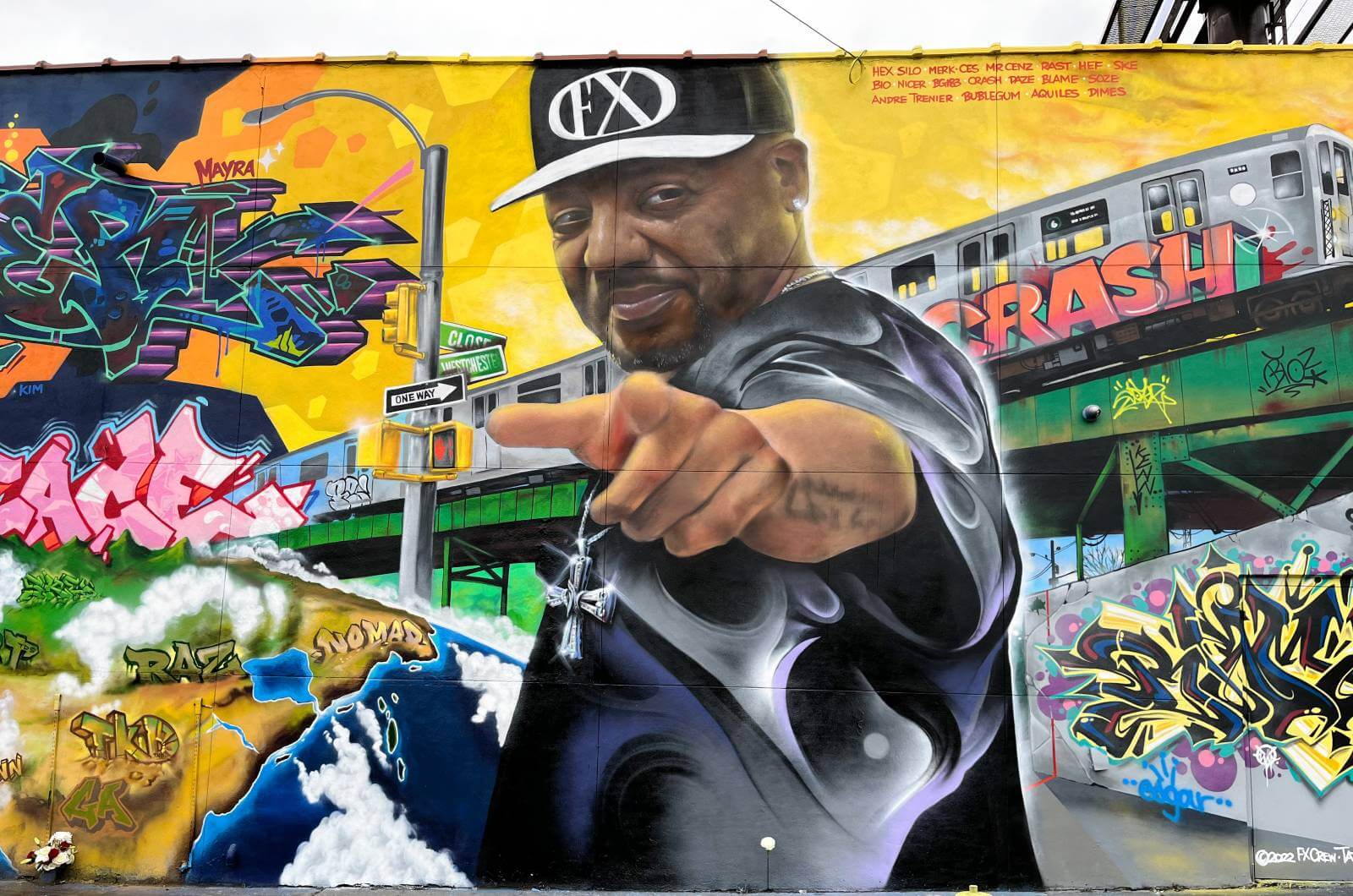 Bublegum is a graffiti artist who began his career in his native Lugo before making Barcelona his home and studio. His roots in graffiti, technical development in realism and his interest in tattooing make him an interesting character, someone we wanted to know more about.

After appearing at several events in Barcelona in beyond – including Gargar, that our readers will be familiar with – we’ve taken the opportunity to talk to him to get to know him a little better.

What were the advantages of starting to paint in Lugo?
I’m not going to lie, growing up in a small town has disadvantages but also many positive things.
When I started painting in 2004, it was Good that there weren’t many of us but everyone had a very marked style and was different from the rest.
At that time, the strongest crew was Concepto Circo who organized the Style Fighters event that high level national and international writers participated in, that allowed me to see a lot of quality and made me interested in painting at festivals.
Another Good thing about Lugo was that it was easier to find virgin spots and the walls lasted until you painted over them yourself, now I appreciate that more haha
When I lived there, graffiti wasn’t as popular as it is now, and it was difficult to get fame. I needed to evolve and that’s why I decided to move to Barcelona in 2014. 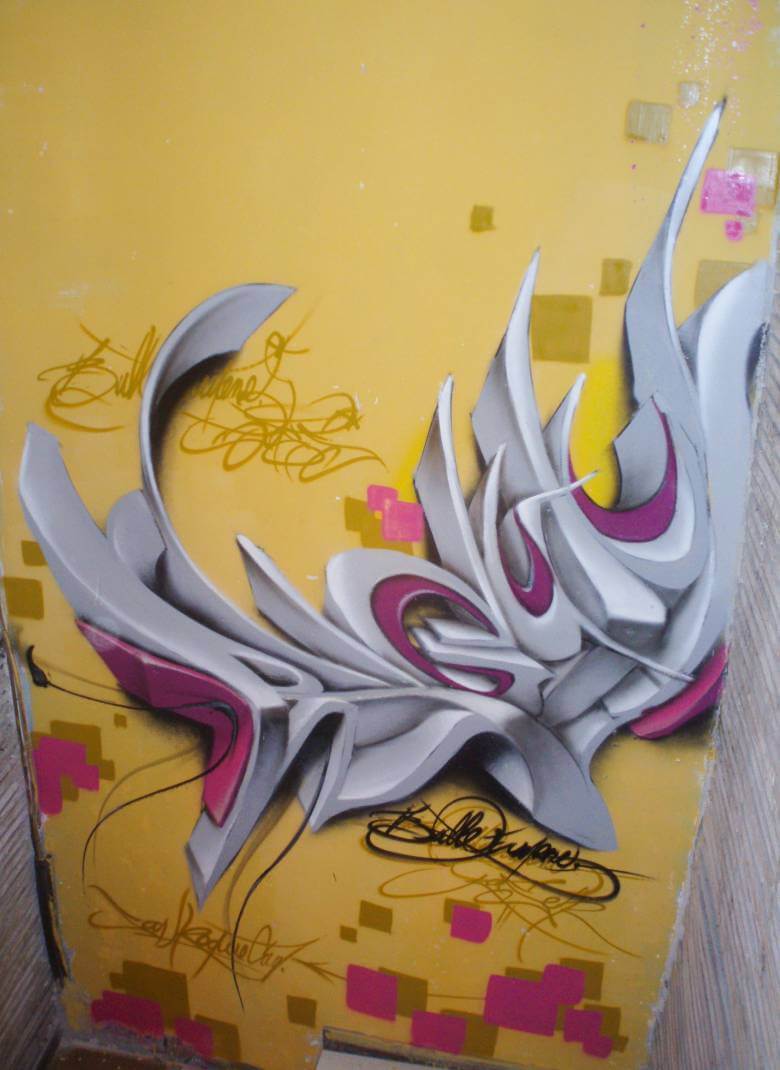 What do you like about the Barcelona scene?
Barcelona has a special charm, it attracts everyone. It’s a cosmopolitan city and Spain’s gateway to Europe, so I’ve been able to meet writers from all over the world who have come to visit.
The graffiti scene is vast and very much alive, you can see it all over the city. Every day there are new pieces. The bombing in the streets is non-stop.
Maybe there could be more people doing multi-day productions. 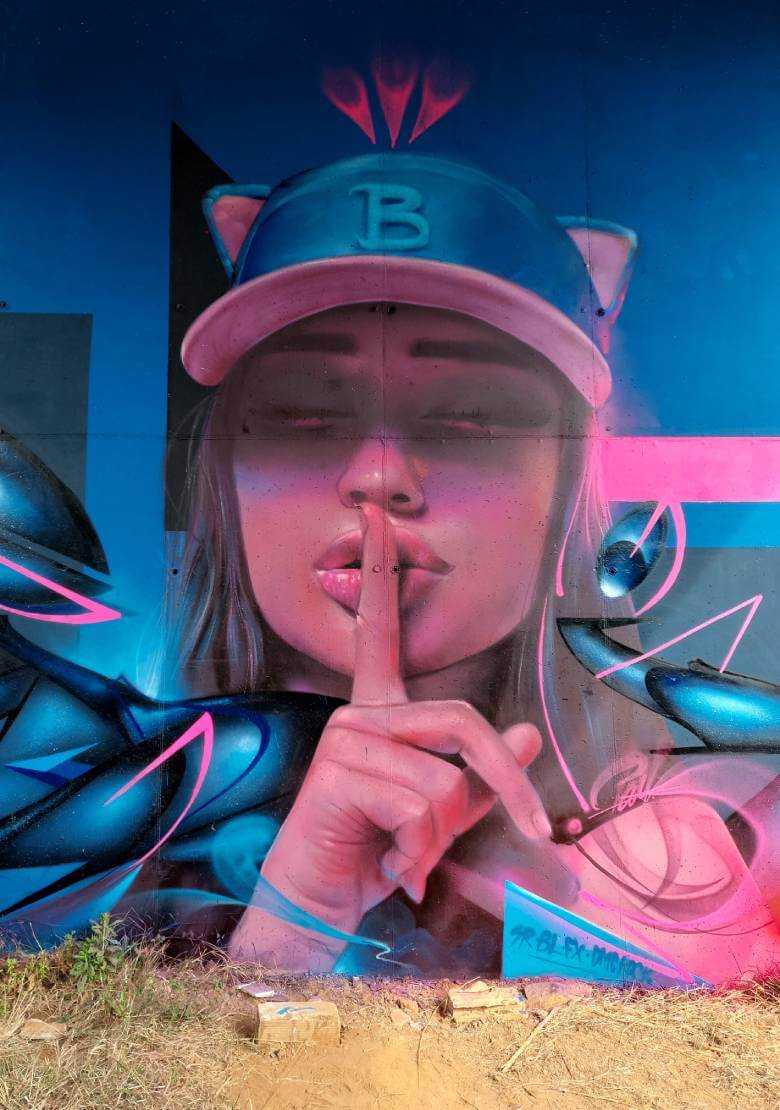 Who are the artists that have helped you develop your style the most, nationally and internationally?
I have always wanted to be versatile. Since my beginnings I have done a bit of everything, I started with letters, characters and animals, then I started to paint photorealism until I developed the style I use now.
Having broad tastes, my references are very varied, not only from graffiti but also from other disciplines like tattooing.
In Spain I’ve always liked Logan, Treze, Saturno, Sex, Miedo12, Sniger and Yoe.
Internationally I like the Maclaim crew, Fx crew, El Mac, Peeta, Daim, Craola, Odeith, Smug, Akhine, Telmo Miel, Jarus and the list goes on! 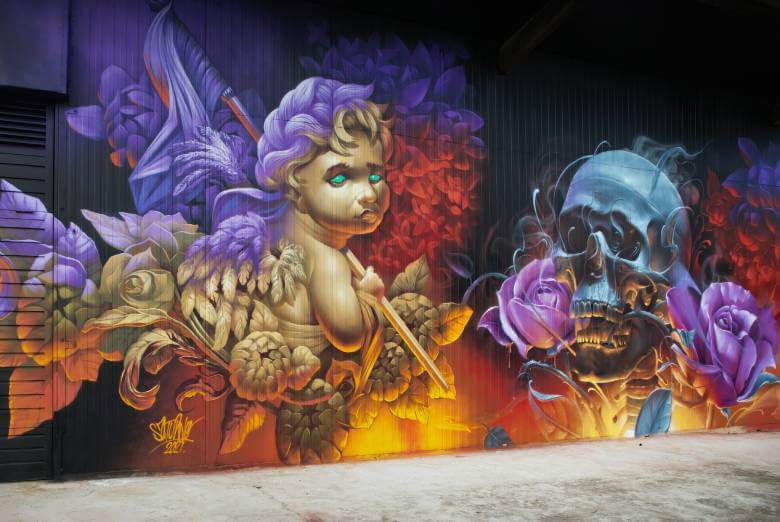 Letters are an essential part of your work. Which graffiti writers catch your attention exclusively in that sense?
For me the letters are the essence, it’s the first thing you try after tags.
When I only see a realism I think that a piece is missing, that’s why I like to integrate letters in my walls since they feed off each other and look better together. When it comes to painting, it’s the freest part and where you really see style.
Obviously to paint this type of mural, you need more time. I’m fortunate to have the time to do so.
I’ve always liked the 3D letters of Peeta, Daim and Edmun.
In terms of wildstyle, the German scene seems very powerful to me: Desur, Norm, Koter, MadC and Semor. Does, Askew, Hadok, Ewok, Kkade, Revok and Red also blow my mind. 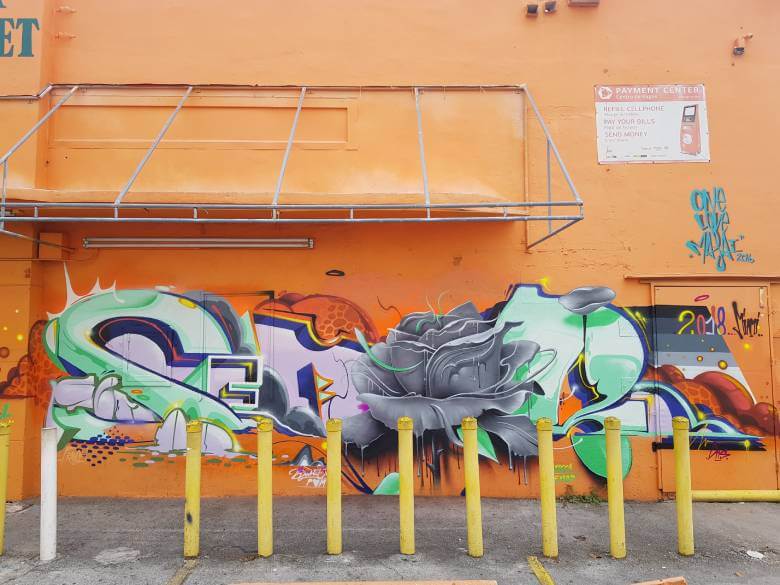 Your style is characterized by beauty: women, flowers, animals. At what point did you think you were capable of representing these figures with aerosol?
When I started painting, my goal was to do a 3D piece and a realistic portrait of a girl.
It seemed like a challenge to spray paint a beautiful woman or the delicacy of a flower because if you are capable of capturing beauty and subtlety on a wall then the rest of things are easier. Obviously it takes years of practice and I still have a lot to improve on.
My advice is to set a goal and work on it for passion, not for money or recognition, that comes later. 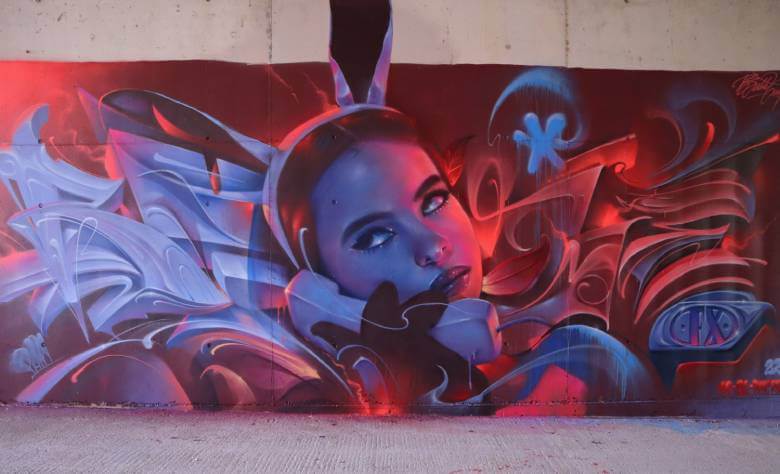 When did you decide to focus your skills on hyper-realistic graffiti?
In Lugo it varied a bit more but when I came to Barcelona most people did letters so I focused more on realism.
On the walls, most people do pieces, so to complete them, I did the characters.
I don’t consider myself hyperrealistic, I would say that my style is a fantasy realism, since I like to interpret images and give them my own touch.

As well as flowers and women, skulls are very recurrent elements in your work. What do all these representations mean to you?
In my work I focus on aesthetics rather than conveying a message. Sometimes I include small nods but that’s not my strong suit.
I’ve always been inspired by nature and its organic forms, you won’t see many straight lines in my work.
When it comes to flowers, I like to work the light and shadow of petals, I like make them aggressive while being somewhat delicate.
For obvious reasons, the beauty of women is impressive and is the engine of the world. El Mac influenced me in this respect, how can you fall in love with a wall!
Skulls are also attractive on an artistic level, and they are a universal theme.
I quickly get bored of the same theme, so I try to vary and expand my repertoire. 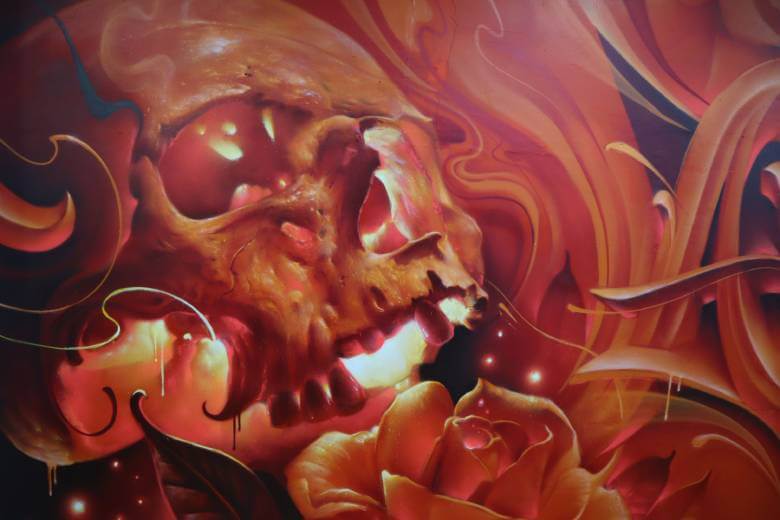 Can you tell us about the process behind your interventions?
Lately, it’s essential to me to see the wall before coming up with the idea. Based on the spot, I begin to imagine if it’s asking for something as an accompaniment to the environment or something to contrast completely.
Once I’ve chosen a photograph, I start to work on it in Procreate. I try out colors until I’m happy, or if I’m painting with someone else, I let them choose the range so I have to use different color combinations.
50-70% of the wall is planned, and the rest is whatever flows at the moment.
When it comes to painting, I’m a bit chaotic and it depends on the sketch, but normally I start with a base-medium color, then I go darker and nuanced, then I lighten it and at the end I add the highlights. Sometimes I change this order because I’m having so much fun with highlights and I can’t wait haha
I usually improvise pieces. Sometimes I carry a basic sketch, but I like adapting them to the moment.
Sometimes I don’t know when to stop. I always think that more elements could be added, minimalism is not my thing. 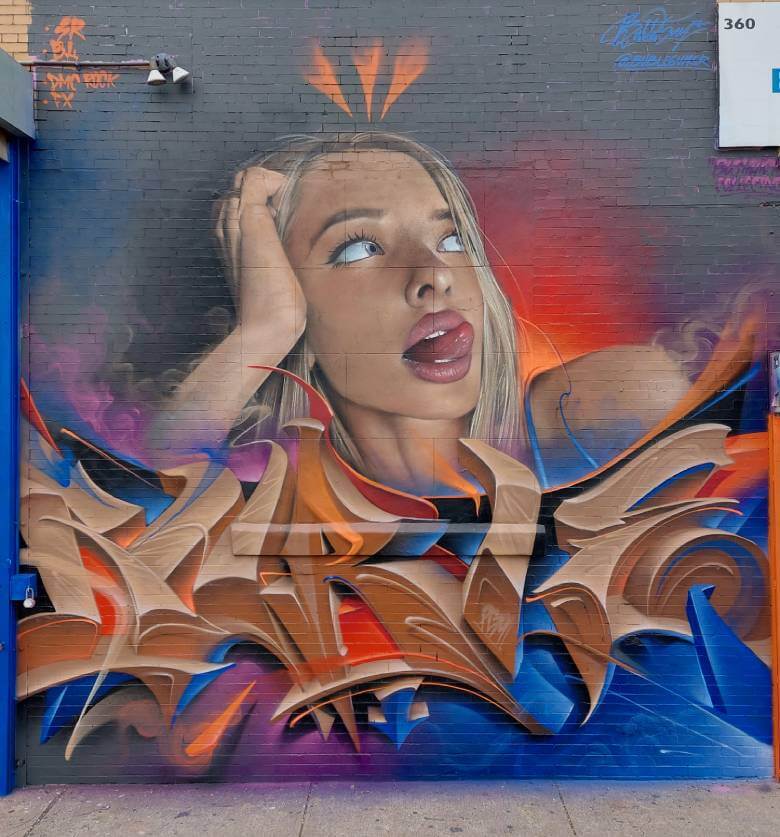 Hardcore or 94? Why?
Basically I paint with 94 because I know the whole range. It works well for my work but I complement it with some Hardcore. They both work perfectly! 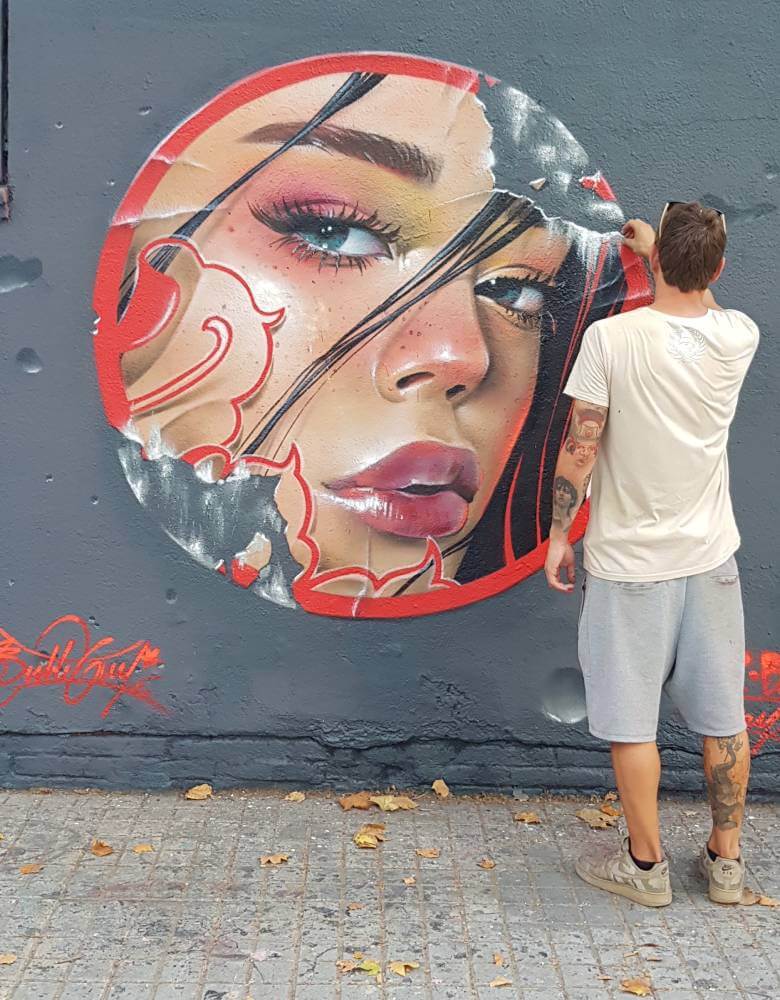 You’re represented by Aurum, the Thai gallery of the legendary English writer Goldie. How is your relationship with the gallery and the famous curator?
They got in touch contact during the lockdown – the perfect time to do canvasses. Goldie saw the portrait I did at the MOS Madrid and it caught his attention. I was very excited to be able to talk to him and find out that he wanted my work for his gallery.
Exhibiting with such established artists in Bangkok is a privilege, I hope to visit him one day. 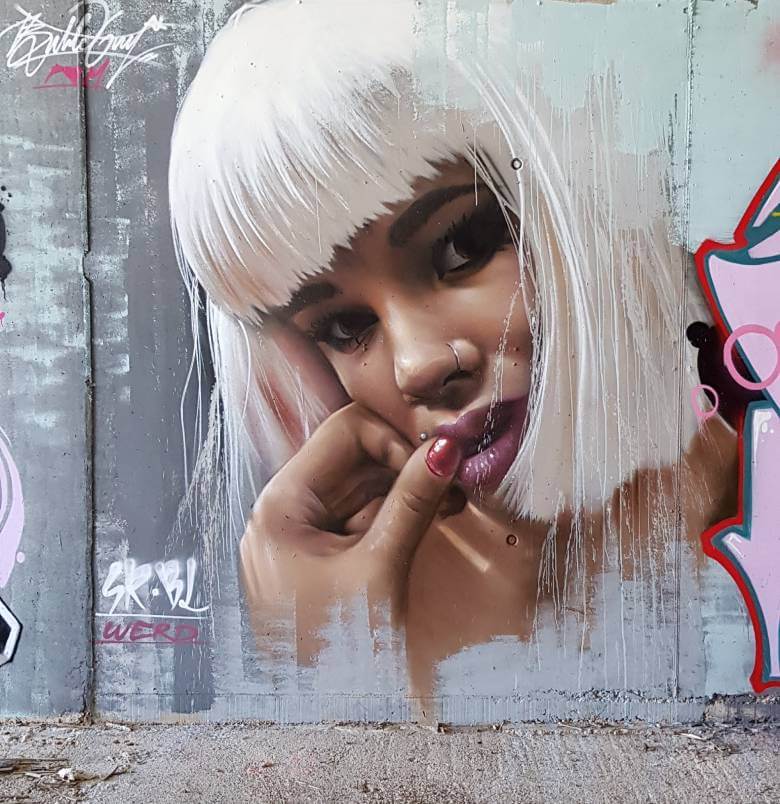 This year you were able to visit the mecca of graffiti, New York, and participate in a mural dedicated to the late writer Per. Tell us a little about the experience.
The truth is that it was very surreal, a very intense experience.
I had planned the trip before I joined the FX crew. In December they invited me to join the crew so it seemed perfect to go there and meet them.
Per was organizing a wall for world peace where FX, TATS and some guests would get together, it was going to be an important event. At the beginning of the week of the event I was with Per and Blame talking over ideas. Even though he was weak, he made the effort to show us the wall and remained in charge of all the organization of the event. For me it was a shock that just two days later when I was eating with Soze, they gave us the news that he had passed away. Obviously everything was very sad and in the end, the event became a tribute to his life and legacy.
For me it was an honor and a great responsibility to paint his portrait, but I was supported at all times by FX and TATS, they made me feel like family. The gratitude from Per’s family was the most emotional thing that has ever happened to me.
It was amazing to meet those graffiti legends and share a wall with them. It was also a very special spot since it was where the legendary FX production featuring the apocalyptic Statue of Liberty was located, a wall that influenced several generations of writers. I would never have imagined being able to paint there.
During the trip I did two more murals in Bushwick and Brooklyn that I also loved. Without a doubt, New York is an incredible city and an essential visit. 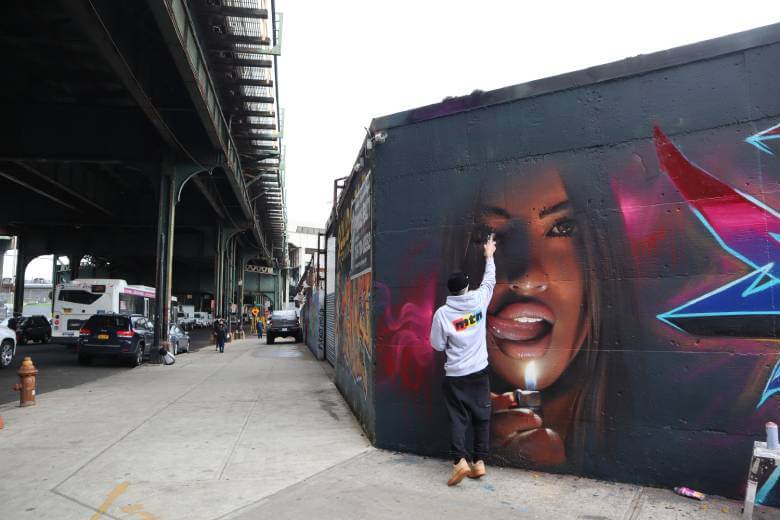 Closer to home, you were invited to Gargar this year. For people who have not visited the town of Penelles, what makes it special?
Coming from New York was a drastic change. I’m a chill person and I appreciated being back in a relaxing environment close to nature.
It’s curious how there can be so many well-received murals in such a small town. It’s perfect for strolling round because there’s something to look at around every corner.
For that mural, I wanted to do something that had a rural touch, hence the poppies – a flower that I don’t usually do. Coincidentally, the field opposite the wall was full of them so it fit perfectly.
I chose a combination of shades that I usually like: browns with oranges and reds. During the first days of the process, the variety of birds in that area caught my attention and on the last day I added a red cardinal to finish the wall. 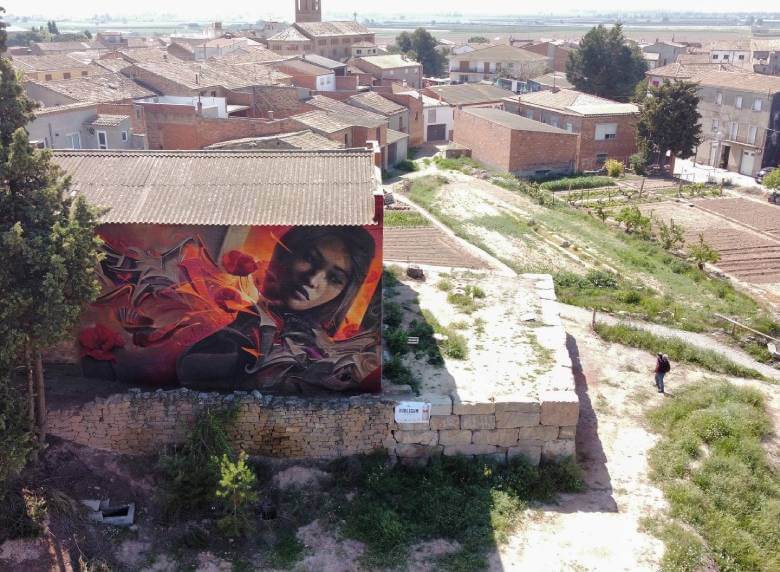 If you like this interview, make sure you check out our chats with artists like Benny Diar and Lauren YS.
For fans of graffiti and street art in Catalunya, a visit to Gargar in Penelles, near Lleida, is a must.