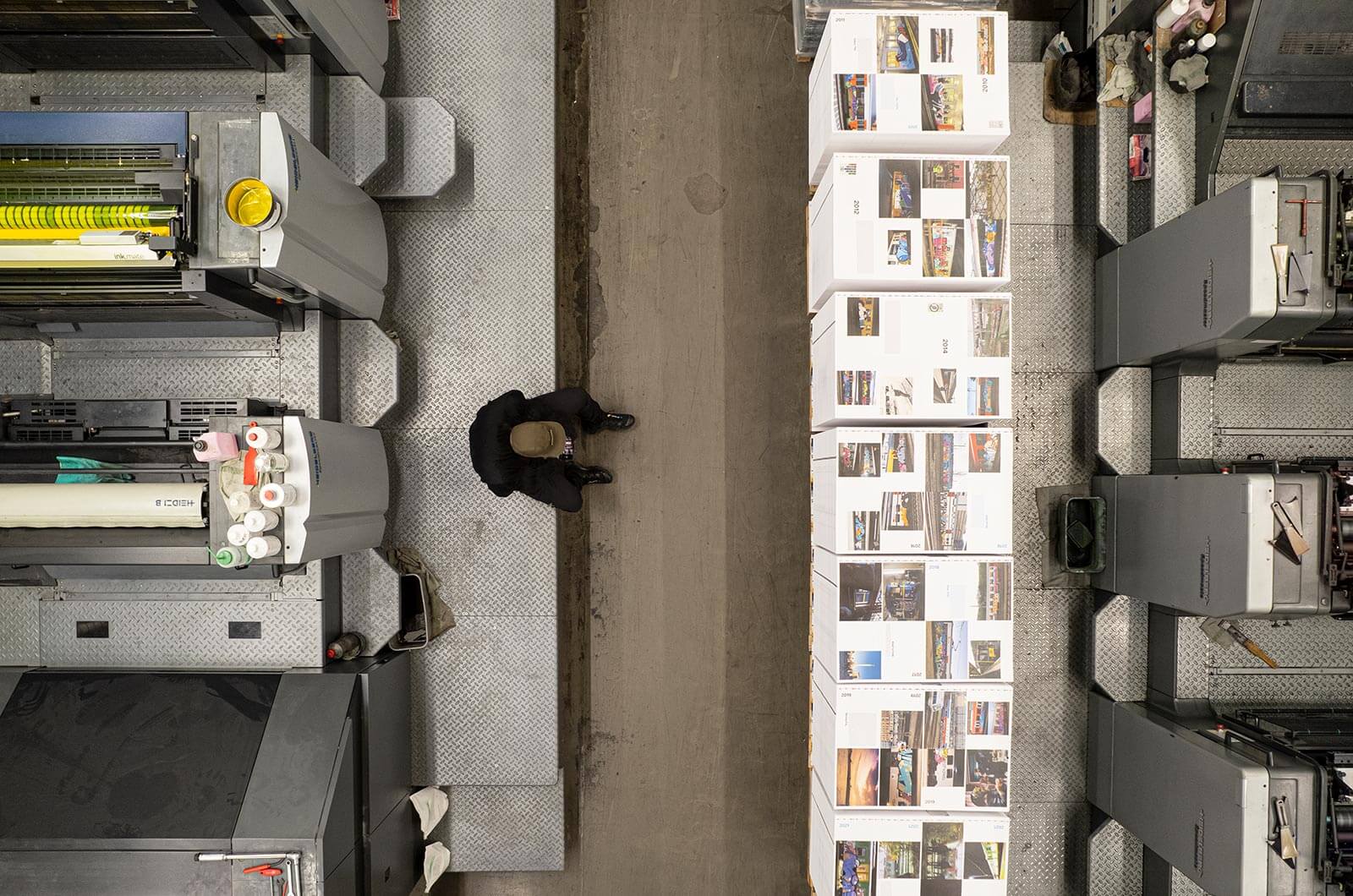 Reaching 30 years of painting non-stop is the perfect occasion to celebrate by bringing out a book. Especially if it concerns a writer as well-known as Vino TSK. The first installment of this two-part publication has just dropped, so we figured it was the right time to talk to him about the new publication –VINO TSK GRAN RESERVA VOL.2– plus other aspects about his role in the history of international trainwriting. Let’s raise our glasses and toast Don Gran Reserva aka Vino TSK.

“After years in the game, I believe that the most valuable thing I can leave behind are my experiences.”

In an interview with the Breaking The Rules podcast, you mentioned that this book is a way of explaining your way of life outside of family and work to your loved ones. Why did you decide to make this material available to the general public?

I think that when you reach an age you start to think about the legacy that you are going to leave to your children, friends and people close to you. After years in the game, I believe that the most valuable thing I can leave behind are my experiences. I think it would be very sad if they were forgotten, if there was no record. I feel obliged to at least compile them and leave them there for whoever is interested.

According to the Instagram account dedicated to the book, this second part will include material up to 2009. Why did you choose 2009 instead of dividing the material into two equal sections of 15 years?

That year was very important for me, since things happened that marked a before and after in my personal life. They had a notable influence on my way of painting and understanding graffiti and the concept of crew.

The book is divided into two chapters, but the latest work comes out first. Why didn’t you start with the earliest pieces?

Why not? I have always tried to surprise artistically, contribute something different and stand out from the rest. This project couldn’t be anything less. I also want to be able to attract the younger public that today isn’t as interested in history. I talk to them about the present moment so that I can then introduce them to my story and let them know how graffiti has evolved. How we started and why it has kept us hooked until today. 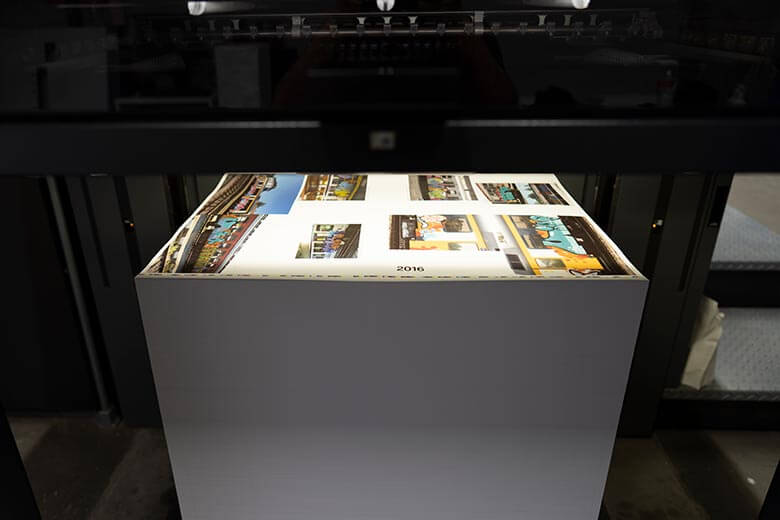 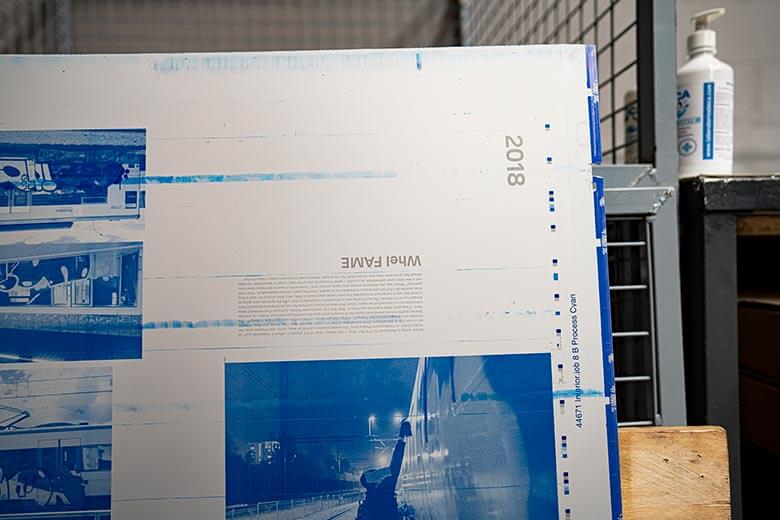 Without a doubt, after 30 years of graffiti it’s a great time to produce a volume of all the work you’ve done. What criteria did you use to select the productions you’ve included? Are there any that you couldn’t publish that you’d have liked to?

Unfortunately I had to be very rigorous when choosing the material. I’ve left out lots of pieces because perhaps the photos were not up to par, or I didn’t like them. I say unfortunately because there’s always a story behind them that will be lost or that will only remain in the memories of the people who were there in that moment. But there are only so many pages.

Lots of writers have participated in the book with stories. Have you written anything for the book?

Yes, every year I make an introduction to give the reader context or explain significant personal events that year. Each short summary is followed by the statements of friends who I spent time with that year.

“Before, there was also a feeling of helping each other, a certain curiosity to meet and help other people like you. Sometimes now it seems as if simply the goal of painting trumps all those core values.”

30 years is a long time painting. What are the biggest changes in train writing you’ve seen in all this time?

In the beginning train writing was something more spontaneous, local and fun. Now it’s much more programmed and professional. The the world is becoming more globalized, with greater population control and it’s more difficult for new generations to get into a “hobby” that requires so much effort, both in terms of time and money, that doesn’t pay and can only bring you trouble.

Things are getting harder and fewer people want to take train writing seriously. Before, there was also a feeling of helping each other, a certain curiosity to meet and help other people like you. Sometimes now it seems as if simply the goal of painting trumps all those core values. 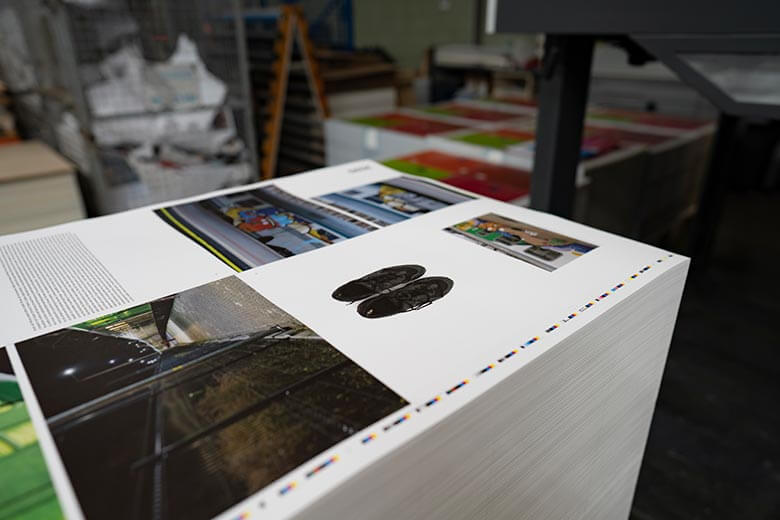 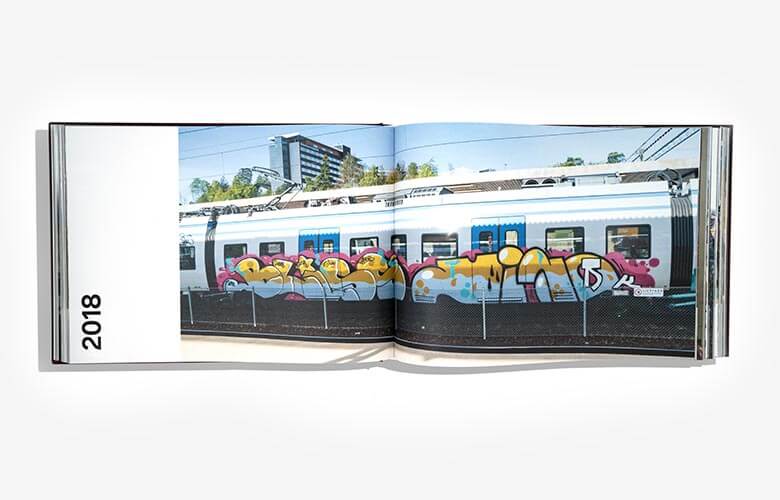 And what major changes have there been in your graffiti?

I have to be more effective, fast, agile and decisive. My skills are no longer the same as when I was 16 years old. As for the creative part, I’ve noticed that I don’t have as much time to experiment, but I’m still curious.

Participating in this demanding type of graffiti as constantly as you have done is something that few writers have achieved. Is there a secret?

Passion for it. In a totally monotonous life it’s an escape route. Serial killers go on a murder spree until they get caught. Others take drugs and go to a party to hook up with anyone on a crazy night and return to their normal lives the next day. And I don’t like drugs, they make me feel sick.

“In my case, coming from a very poor Barcelona neighborhood in the 90’s, it could be said that the future that awaited teenagers like me was very dark.”

Your contribution to the history of European graffiti is undeniable. You belong to a select generation that was a pioneer in what we know today as train writing. How did this phenomenon of international writers who target trains and subways – that would inevitably be cleaned – emerge?

I wasn’t really a pioneer, there were already people who did it in my city and obviously in other European cities, but I can say that I’ve been very consistent from I started until today.

It’s a combination of circumstances that attracted our generation to do it. In my case, coming from a very poor Barcelona neighborhood in the 90’s, it could be said that the future that awaited teenagers like me was very dark, perhaps ending up in jail or hooked on drugs.

Graffiti allowed me to meet people from other countries, travel and awaken my interest in what is outside my neighborhood. Graffiti isn’t affected by social or economic power, it gives the same opportunities to everyone. You learn to fight. 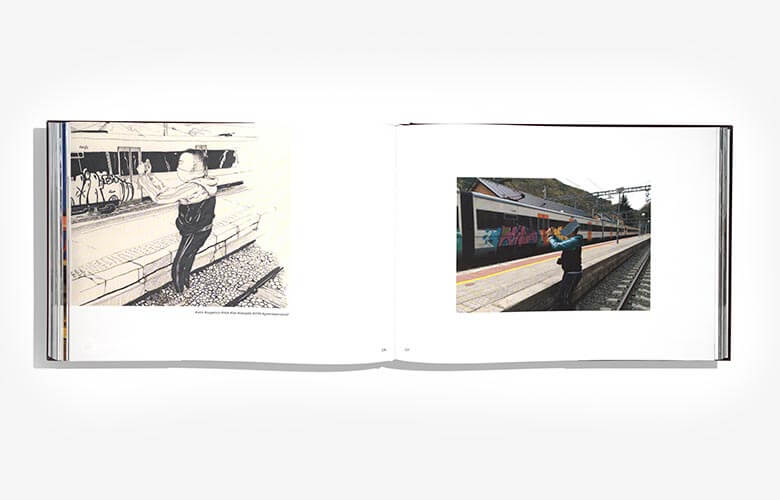 Do you think this was a continuation of New York graffiti or is it something completely different?

For me it was something completely different from the beginning, without underestimating the above. They are two very different things. Perhaps it was the trigger, but after a few years when changes began to take place, it no longer had anything to do with New York graffiti.

“Problems and difficult situations are intrinsic to the lives of graffiti writers.”

What role did the InterRail concept play in communication between writers from different countries?

It was the tool. In my case and in the case of many others, being able to travel with fake InterRails was an opportunity to do things that I would never have achieved with by background. In addition, meeting people and getting visited by them helped us to create this network of friendships that are still strong today, as you can see in the book.

You have seen many writers who’ve stopped painting for different reasons. Others have altered their rhythm; others have made comebacks. However, there’s a certain feeling of unbreakable brotherhood. What do you think it’s due to?

They say that in difficult times you see who people really are, and I totally agree. That’s when you see someone’s true face. Problems and difficult situations are intrinsic to the lives of graffiti writers. There’s a reason people are still there after so many years and adventures. 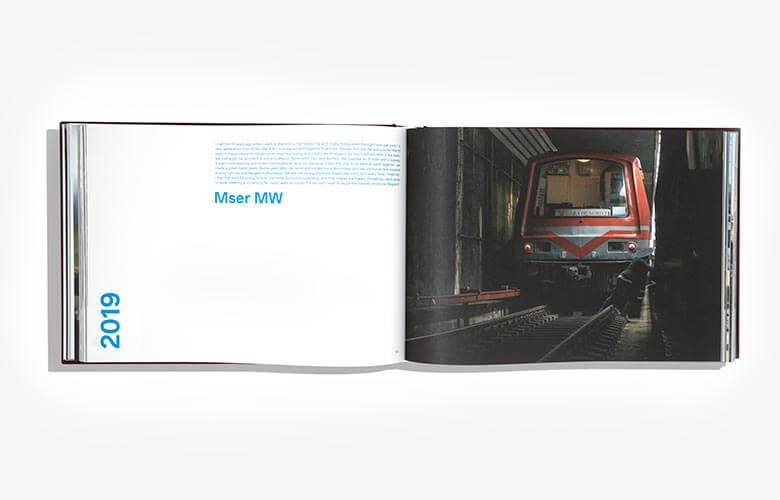 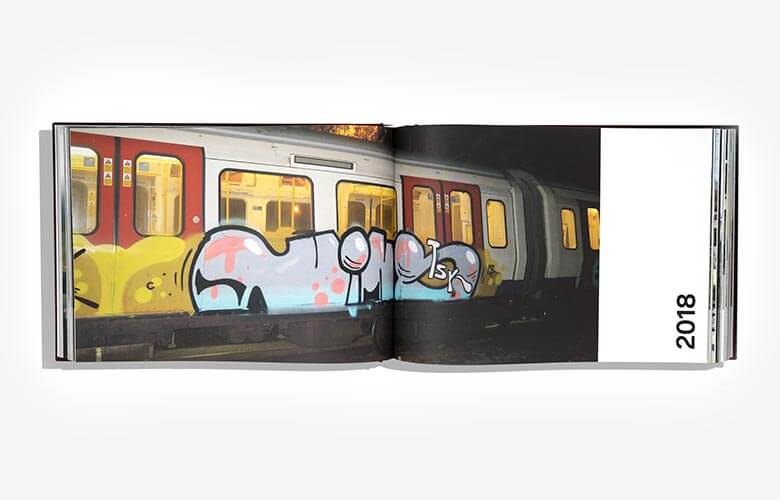 “In football there are very different people playing that sport and they only share that passion. In graffiti there are many more values ​​that unite you.”

Do you think that happens in other hobbies, like football , which you also played?

Yes, it happens in other hobbies, but it’s not as pure and intense. In football there are very different people playing that sport and they only share that passion. In graffiti there are many more values ​​that unite you.

Other writers who have come after you have achieved new goals and revolutionized the game. What do you value most about the new generations?

Totally. In each generation there are people who set milestones and people who go one step further than what has been done up to that moment. The energy of young people generates new activity and a new vision of the past. It’s a shame that I think I see fewer and fewer young people in the game, although the ones I meet are super passionate.

Give us your list of favorite writers, friends and not friends.

I’m not a person who has preferences in terms of styles or technique. From the beginning I’ve never had a feeling of wanting to meet a certain writer, or admiration for them. It’s sad to say, although I admit that I’d have liked to have felt it. It may sound cliché, but people who know me know that I don’t care how they paint, the most important thing for me is the person behind the writer.

Many of the talented writers who feature are my friends and I admire them as people, and I’m fortunate that they wanted to do their bit for this book. I’m not going to name any of them because they are all worthy of my admiration.

Vino TSK Gran Reserva Vol.2 is now available from SprayPlanet.es and at the Montana Shops i Barcelona and Madrid. 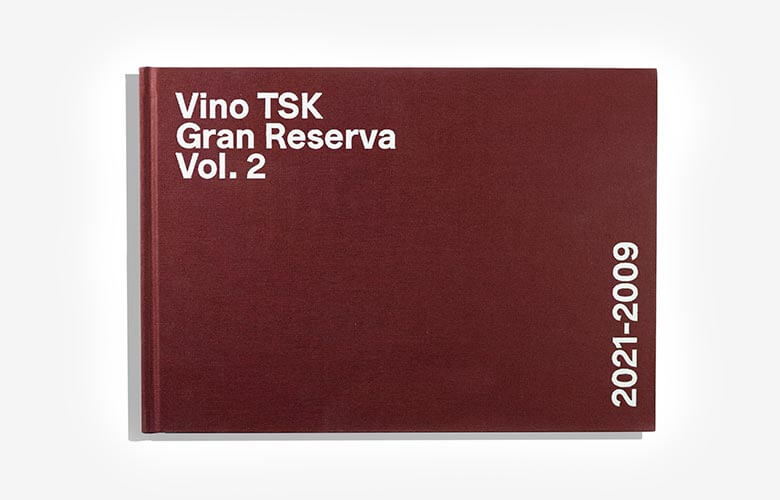