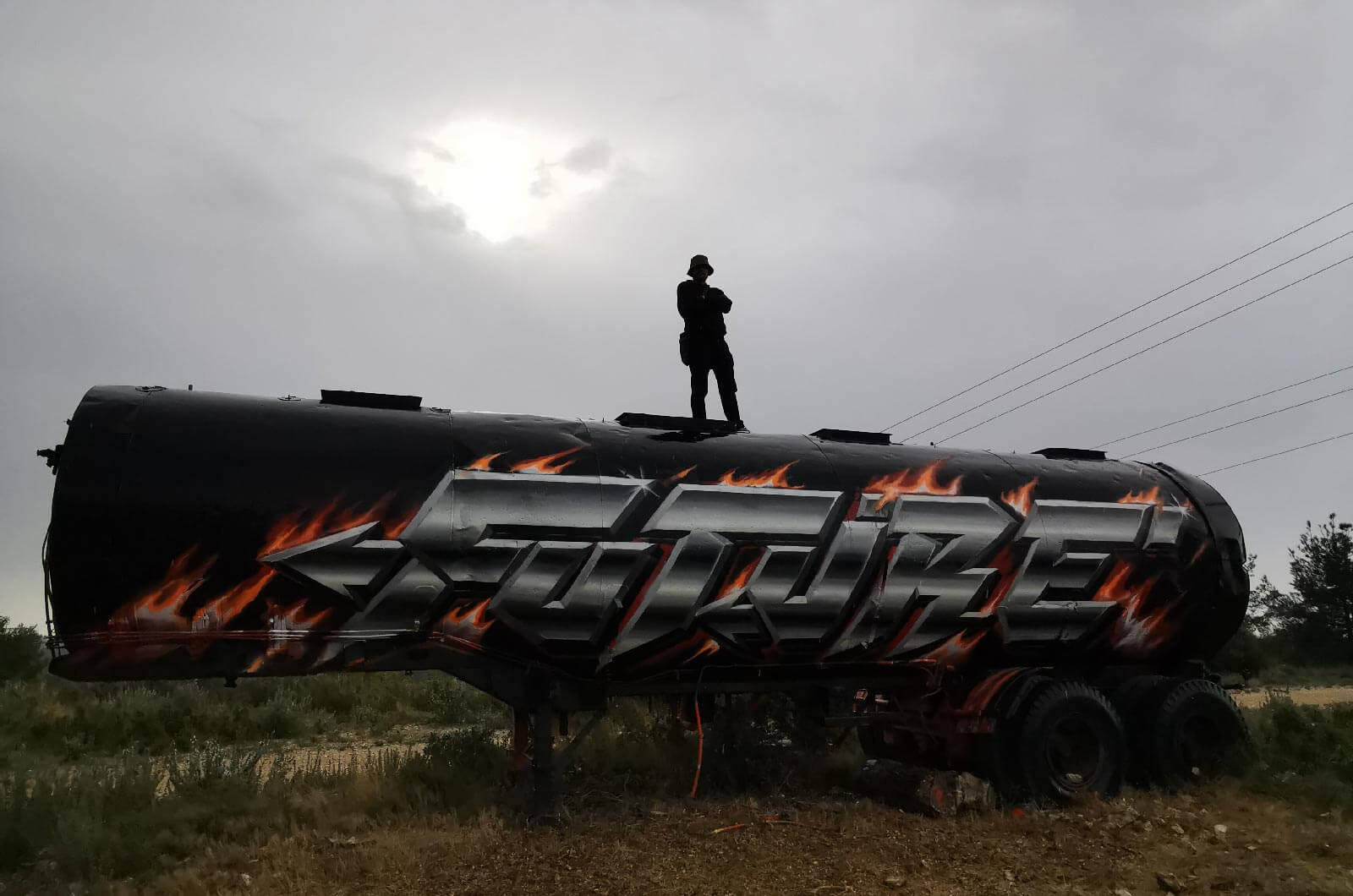 There’s a trending style in contemporary graffiti that uses the aesthetics of retrowave fonts. Fuego is one of the greatest representatives of this style, experimenting with his five letters in an endless number of ways that include some more classic conventions.
It was about time we contacted to artist to chat a little about the thinking behind his style, his painting preferences and his incredible piece called the “Casa del Fuego”.

As a French native, why did you choose the Spanish tag “Fuego”?
I chose ”Fuego” because I thought that it represents me well, and that was a concept to explore. Also, I really liked the sequence of the letters.

There’s a conceptual link between that term and many of your pieces. Is it premeditated or coincidence?
Of course, the concept linked to the word FUEGO is deliberate.
However, I don’t always deal with the subject of fire. It’s a graphic universe that inspires me, but I think there’s still a lot more to explore. 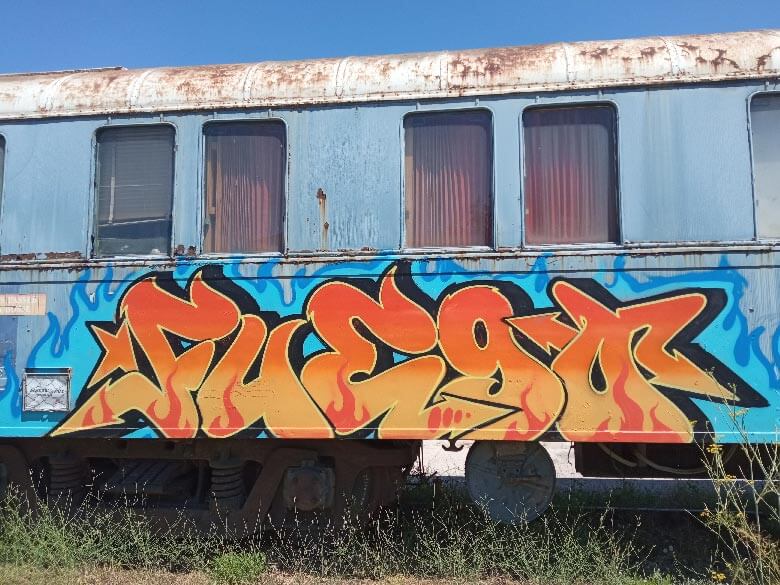 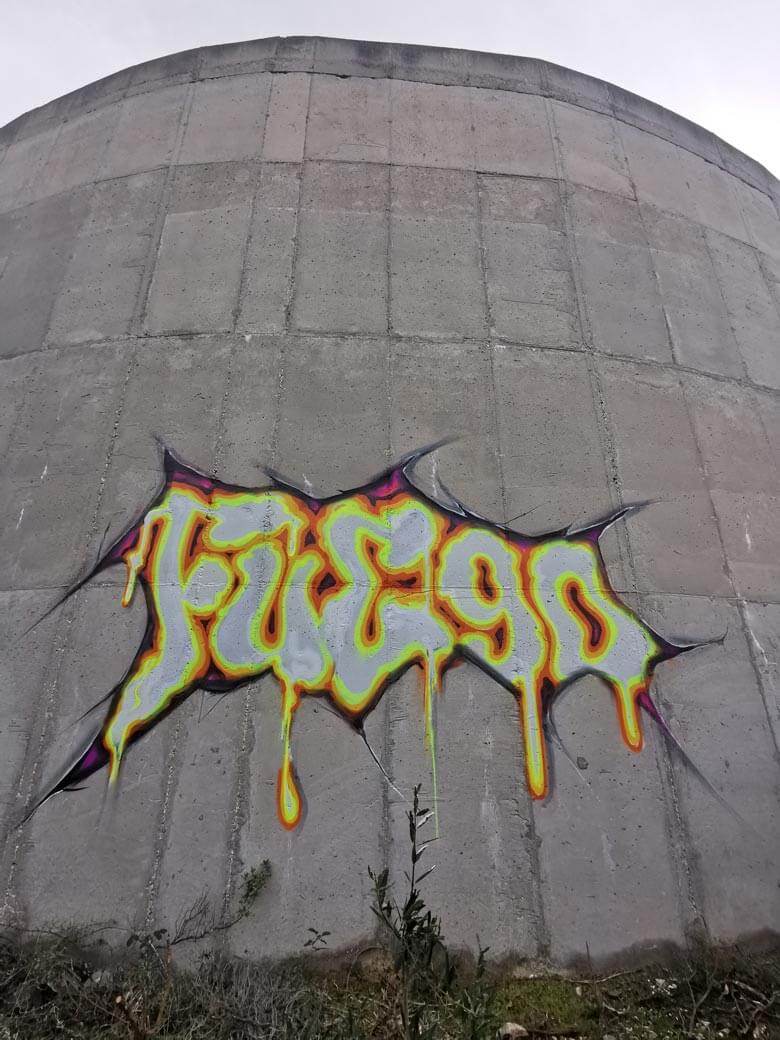 Your style is closer to digital art than classic graffiti. Can you explain where it comes from?
I was basically inspired by the graffiti I saw near my house, “classic” graffiti.
Around 2013 I discovered the work of certain artists who mixed graffiti with “retro-futuristic” influences, such as Dems and Pantone. When I discovered their universes, I was quite impressed and inspired by their work. 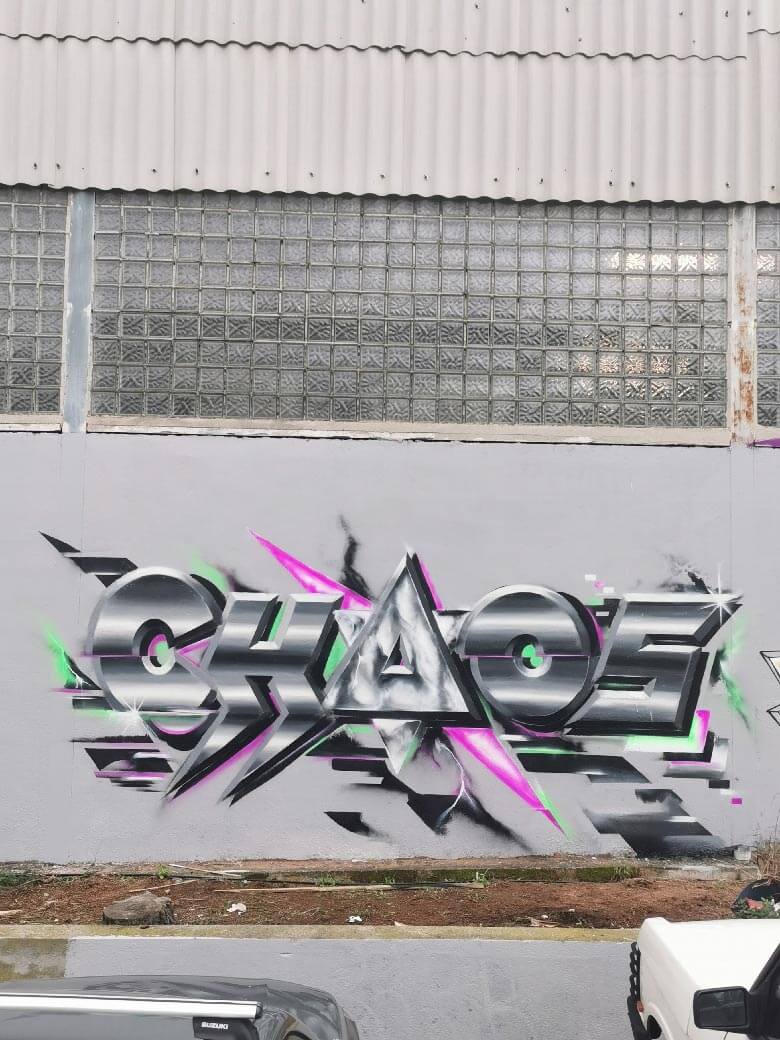 ‘I wouldn’t say it’s a new movement, but I do think we can talk about a kind of modern graffiti.’ 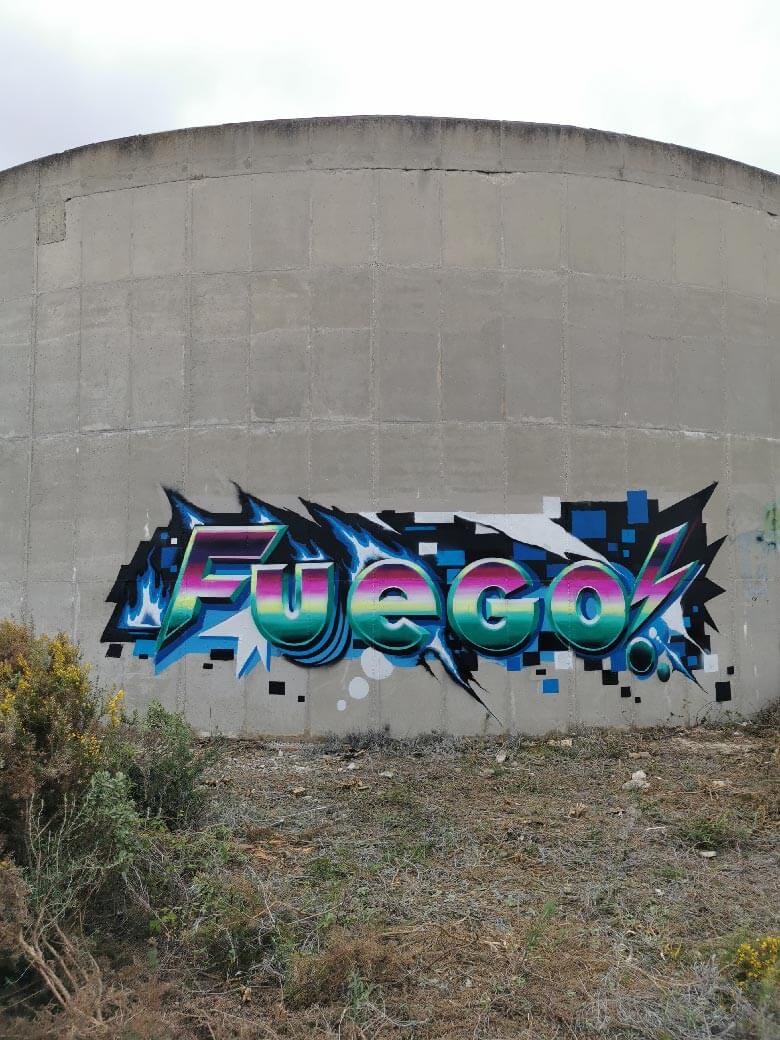 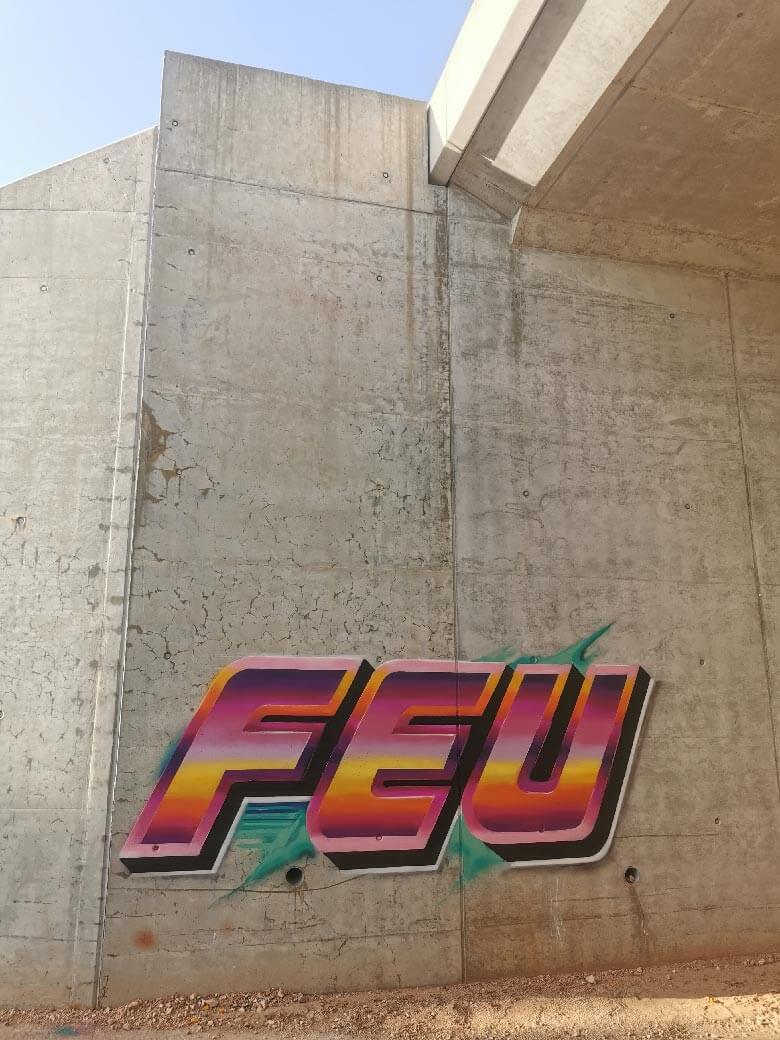 Do you think that what you paint can fit into a new trend?
I wouldn’t say it’s a new movement, but I do think we can talk about a kind of modern graffiti. It mixes influences of “traditional” graffiti and more typographic letters, in a “retro-futuristic” universe.

What other writers do you find interesting in this same vein?
Similar to what I do, I can cite as a source of inspiration Pantone, Dems, Tchad, Dixit, Nefrit33, Tacos and Ernest. Probably forgetting several others. 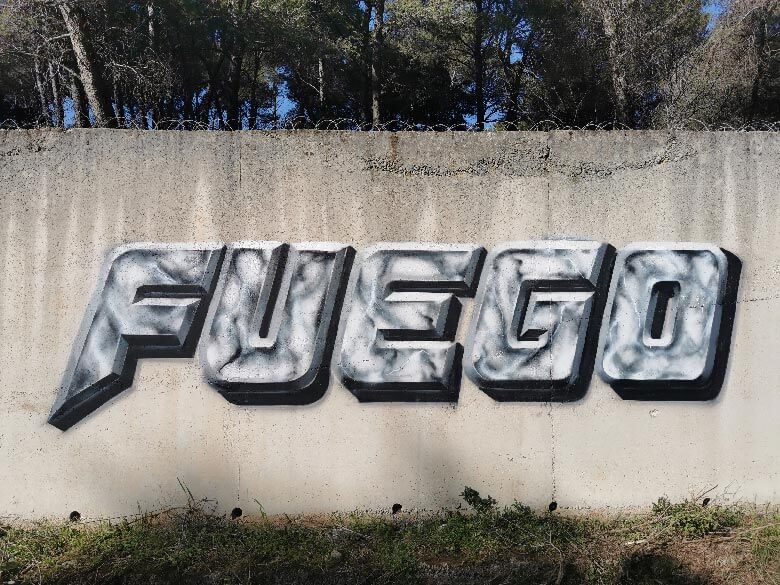 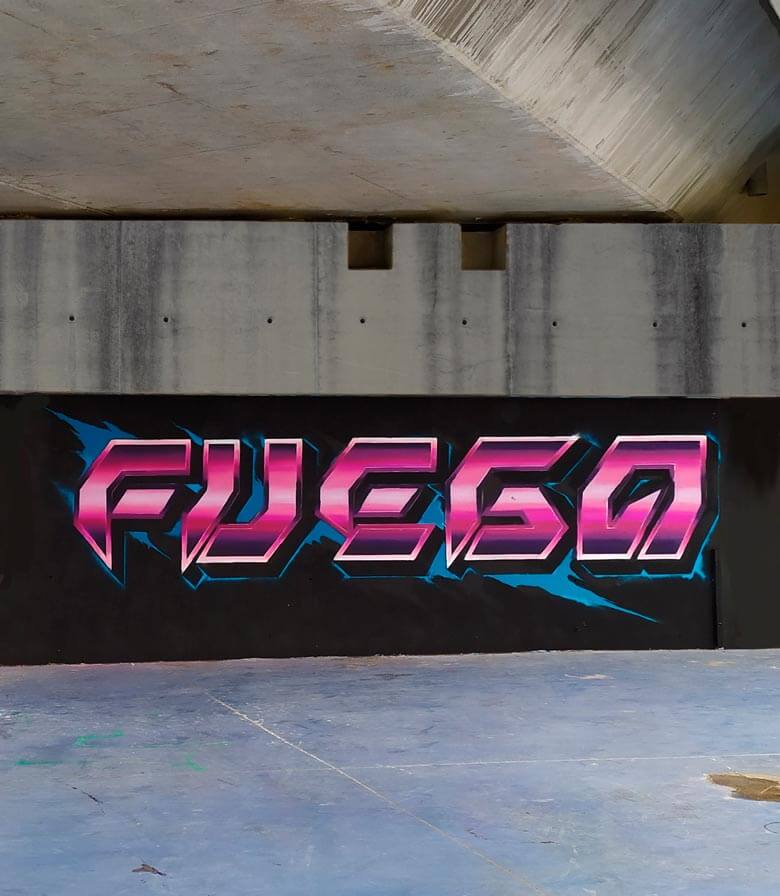 Which writers do you find interesting, even if they have a style that has nothing to do with yours?
Outside of what I do I can name Difuz, Byofa 7FA7, Roice, Deca, Funk RHB, Shore, Nasty… 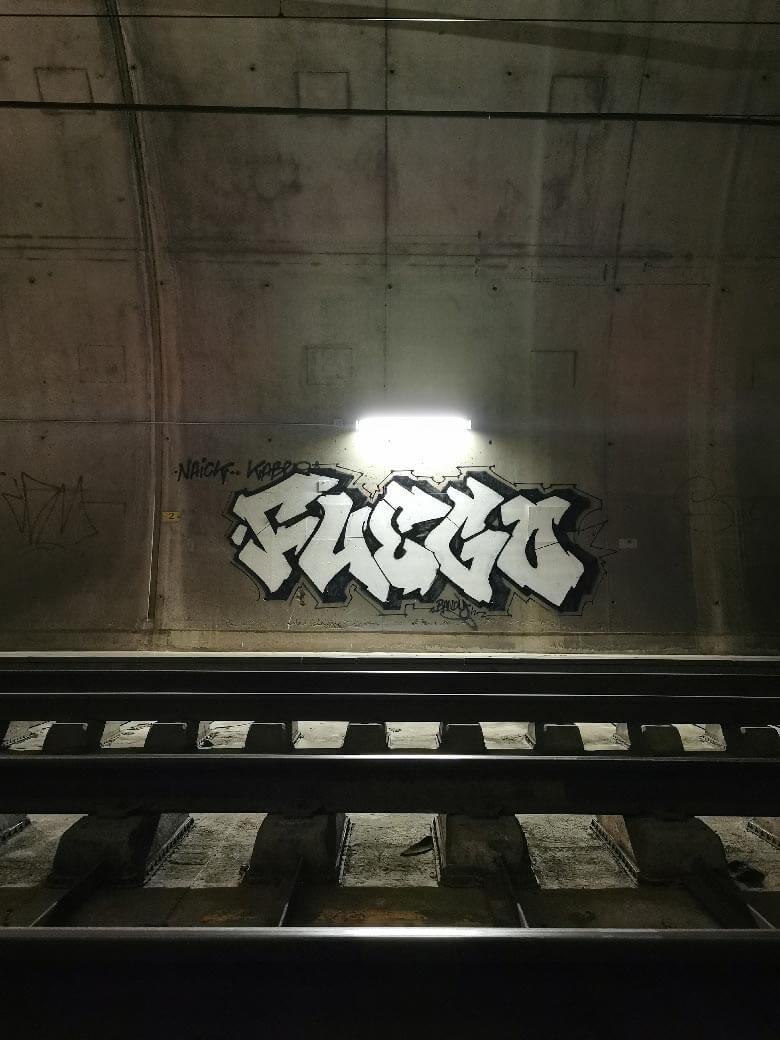 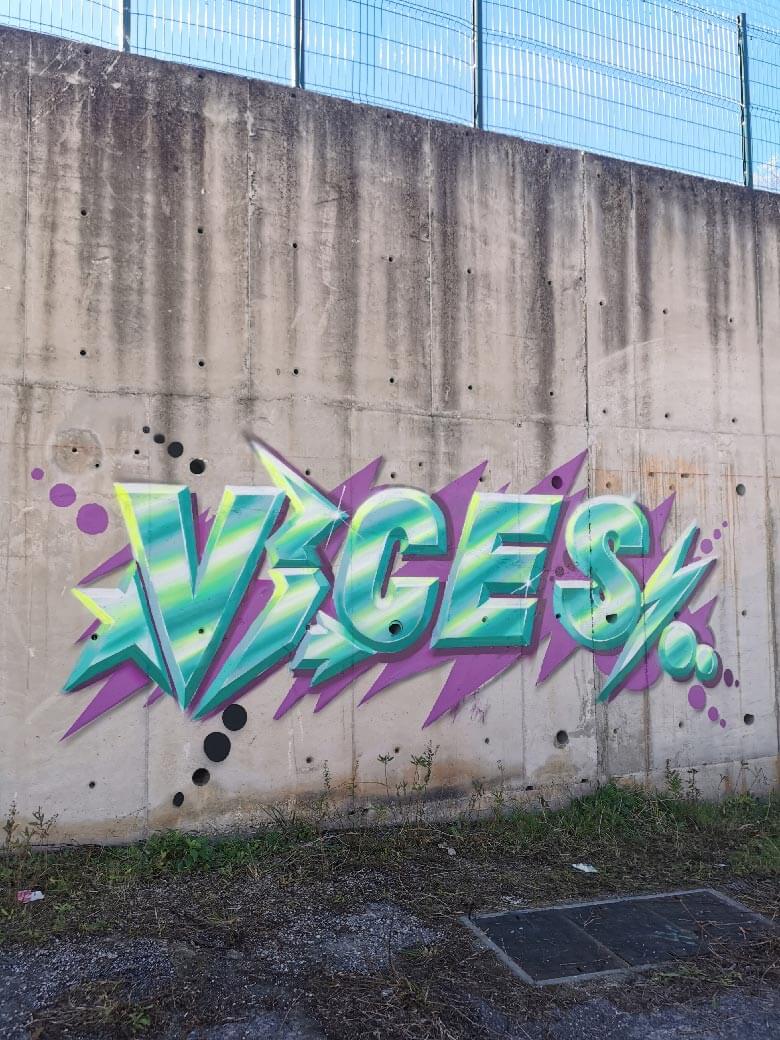 ‘I like to be in my own space without necessarily meeting other writers and having the pleasure of being able to see my piece again a few years later without it having been covered.’

Do you prefer virgin walls for their aesthetic results, implying that you’ve painted a place that hasn’t been visited by other writers, or just because you have access to lots of surfaces like those?
For both. I enjoy painting white cement walls and I like to explore places, even if you have to walk a lot to find them; I like to be in my own space without necessarily meeting other writers and having the pleasure of being able to see my piece again a few years later without it having been covered. 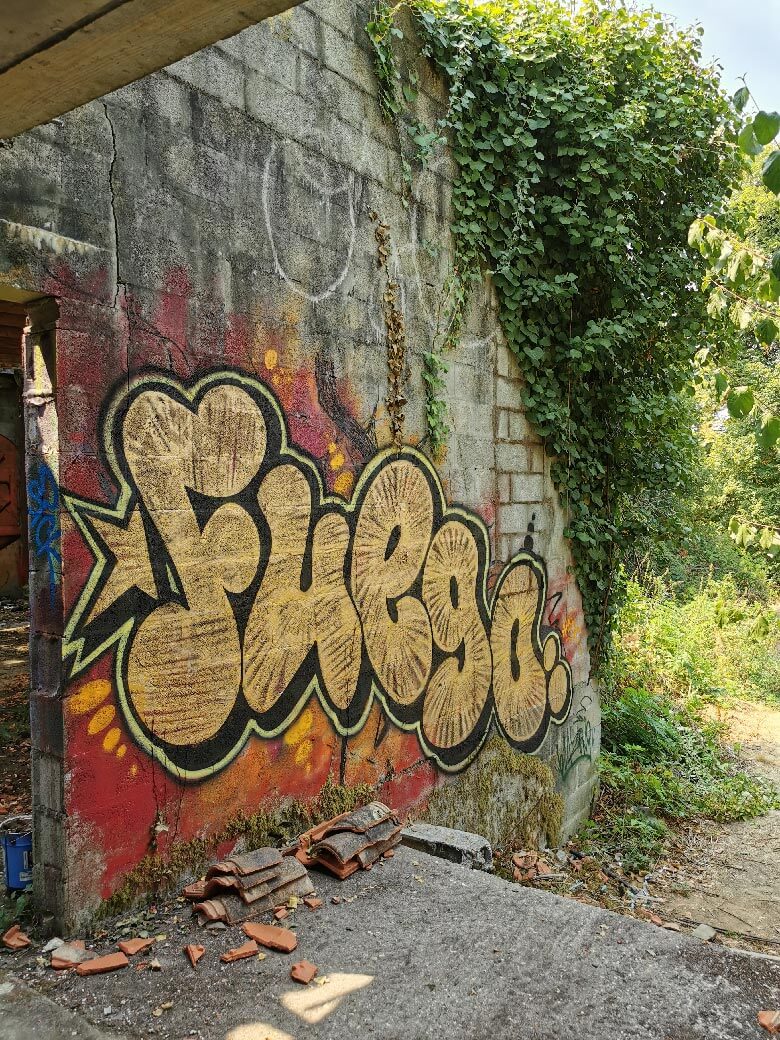 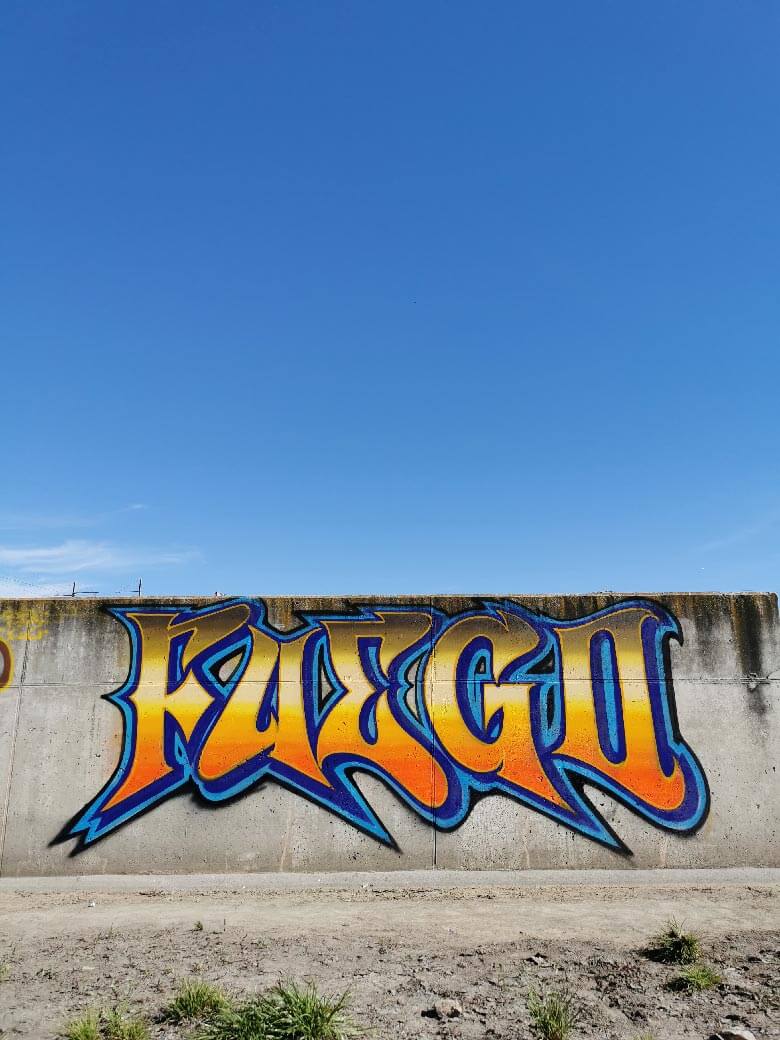 Tell us about “La Casa Del Fuego” – how did you discover that place, why did you decided to carry out the project and what the plans are to create “La Casa del Fuego 2”.
La Casa del fuego is an abandoned house in a rather secluded corner of the countryside.
During the lockdown period, around March 2020, I decided to go there every day to paint only a full side. I spent about two weeks there.
The result was very successful. After that, I decided, three months later, to completely repaint the exterior of the house and therefore paint the other three remaining sides.
Although I started the project alone, several fellow artists helped me, including Nefrit, Sekel and Rodney, who came several times to help me paint the background as well as create their respective pieces. All this happened between August 2020 and October 2020, five days a week.
I’m very proud of this collective project, carried out without authorization or financial support.
“La Casa del Fuego 2” was like a kind of jam that I wanted to invite artists that I like to but without a particular theme. 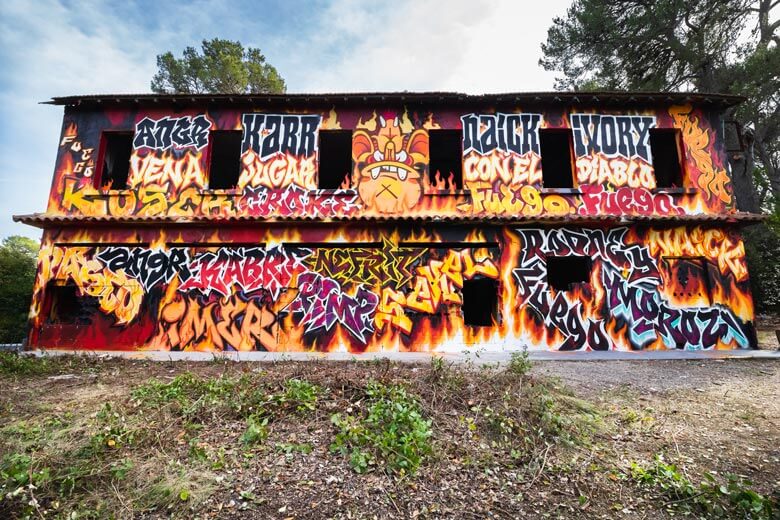 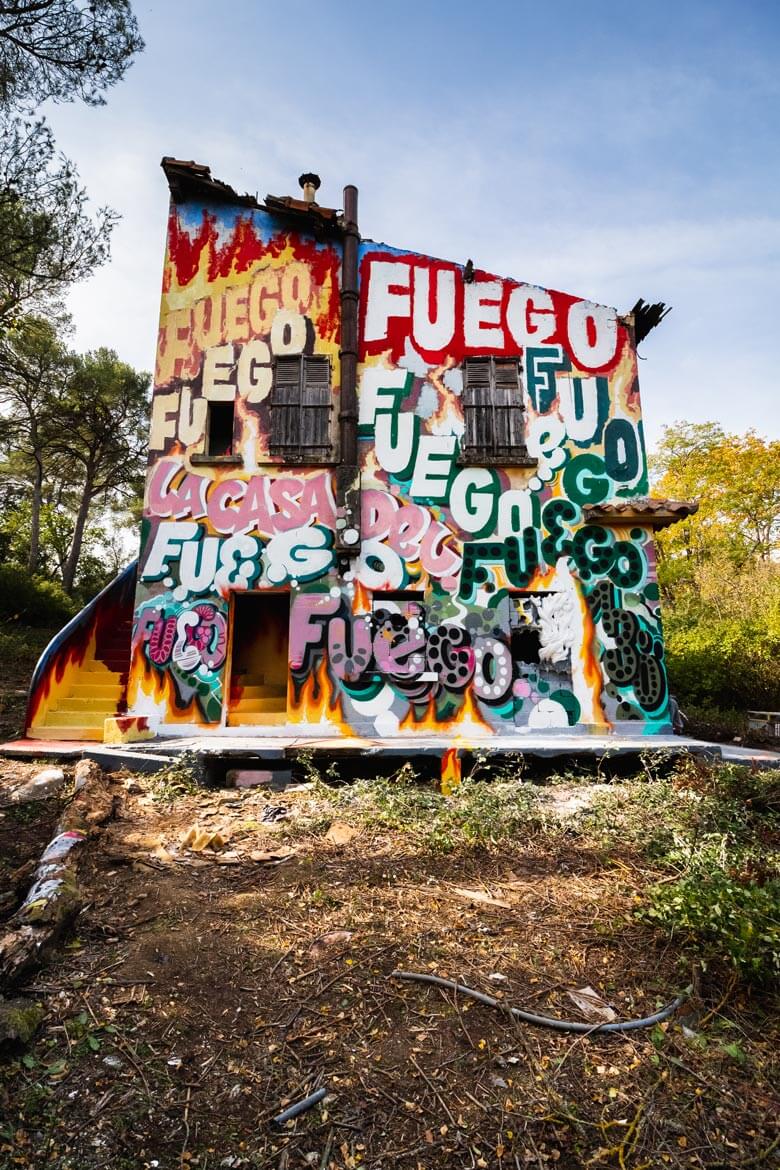 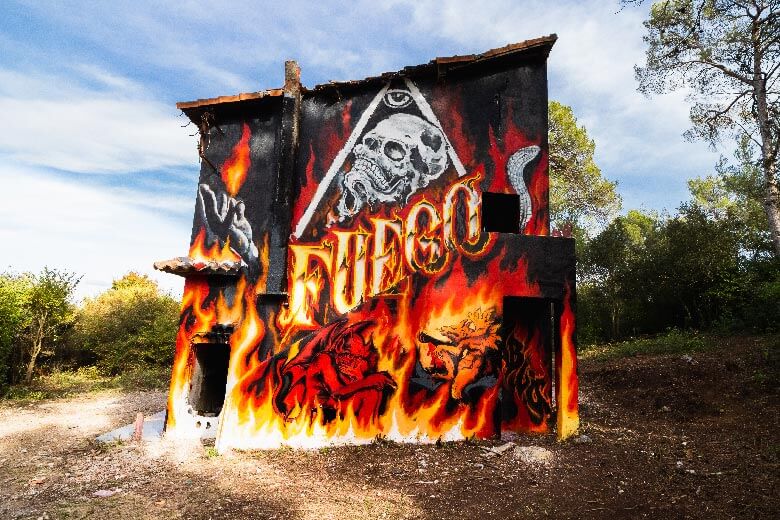 ‘I’m very proud of this collective project, carried out without authorization or financial support. ’

Your piece called “Le Monde Chico” seems like a dedication to PNL. Is it for any specific reason?
Yes, it’s a reference to the song “Le Monde Chico” by PNL. It’s a song I was listening to quite a bit at that moment. 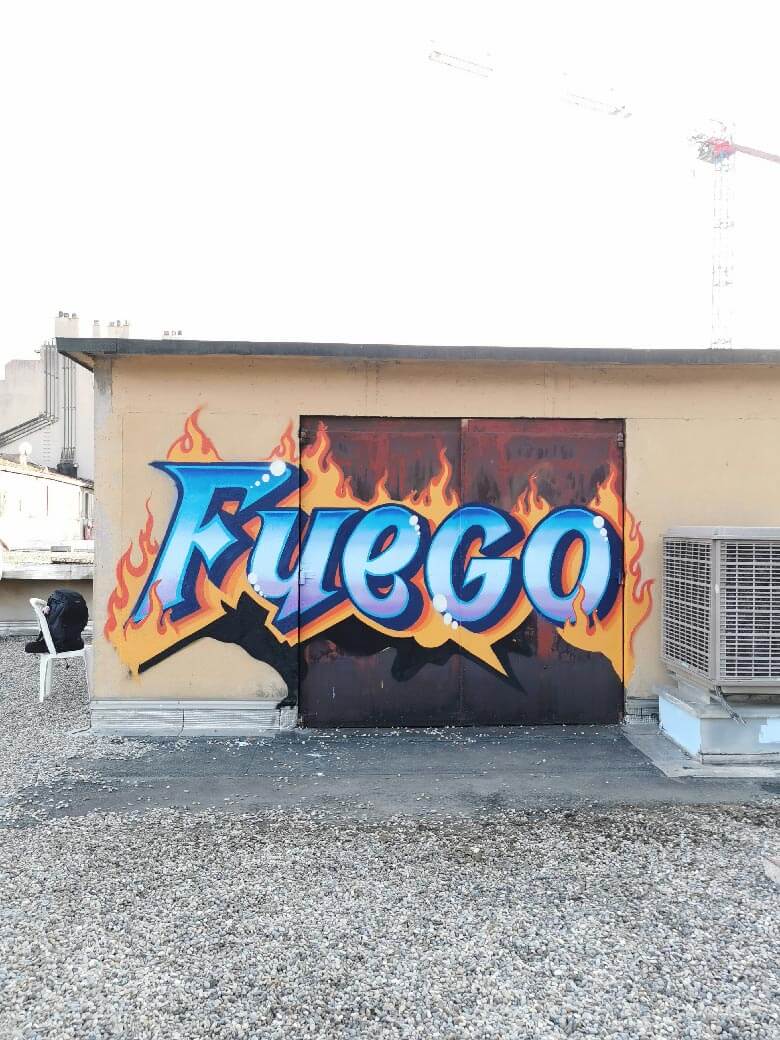 Next year you will celebrate 15 years of painting. Are you going to celebrate? Do you see yourself with motivation to continue for 15 more years? What do you see yourself doing in the future?
No, I don’t think I celebrate that especially. On the other hand, I don’t think I’m ready to stop painting, I’m still passionate about it, there’s always a revival, things to explore.
I can see myself painting for another 15 years if life allows it. 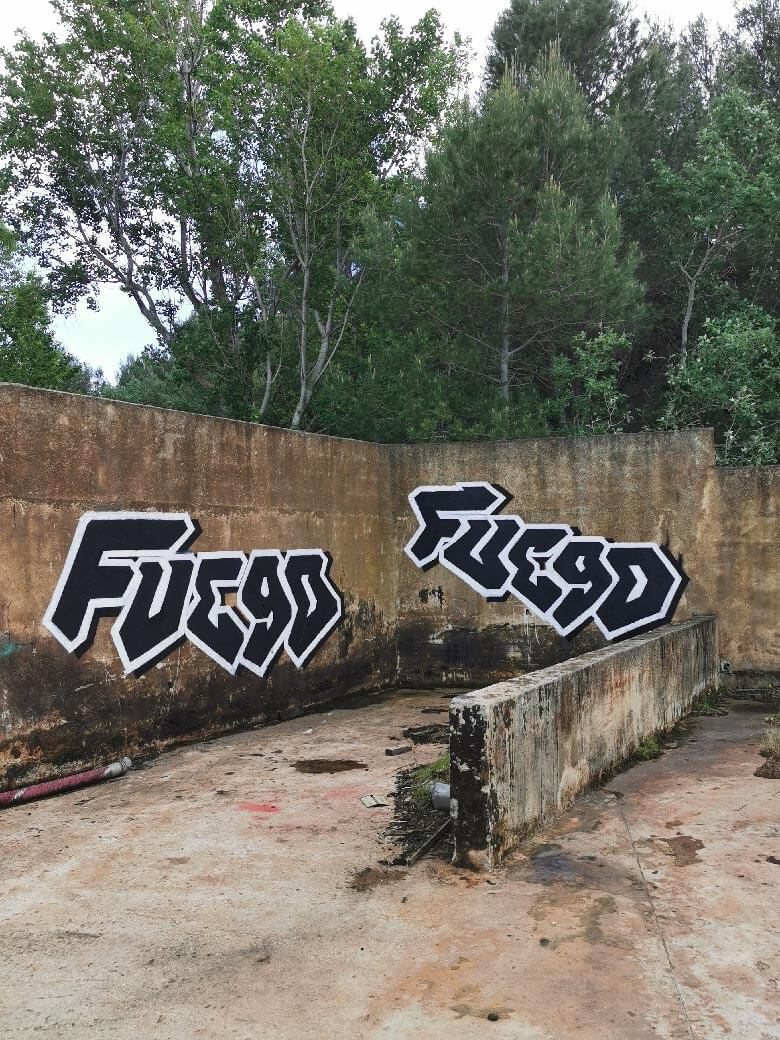 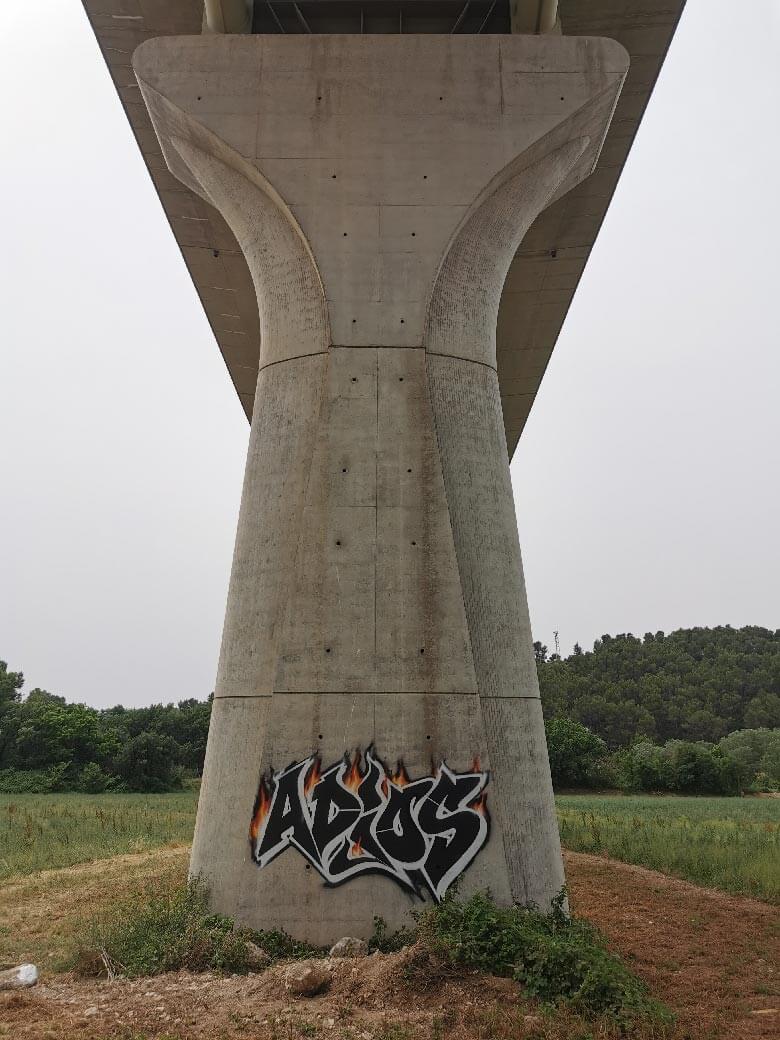