VERTICAL GRAFFITI: THE NEW AND DANGEROUS TREND SPREADING AROUND THE WORLD

It is one of the most dangerous ways you can do graffiti: hanging from buildings to carry out vertical interventions with visibility from far around.

We can’t talk about this phenomenon without mentioning pixaçao movement as the origin, since it’s the international graffiti scene that has focused most on hitting buildings from top to bottom.  Today Subtu and Francisco are perfect examples of the craft, not only thanks to their pixaçao tags applied by abseiling, but also their production of more complex pieces. 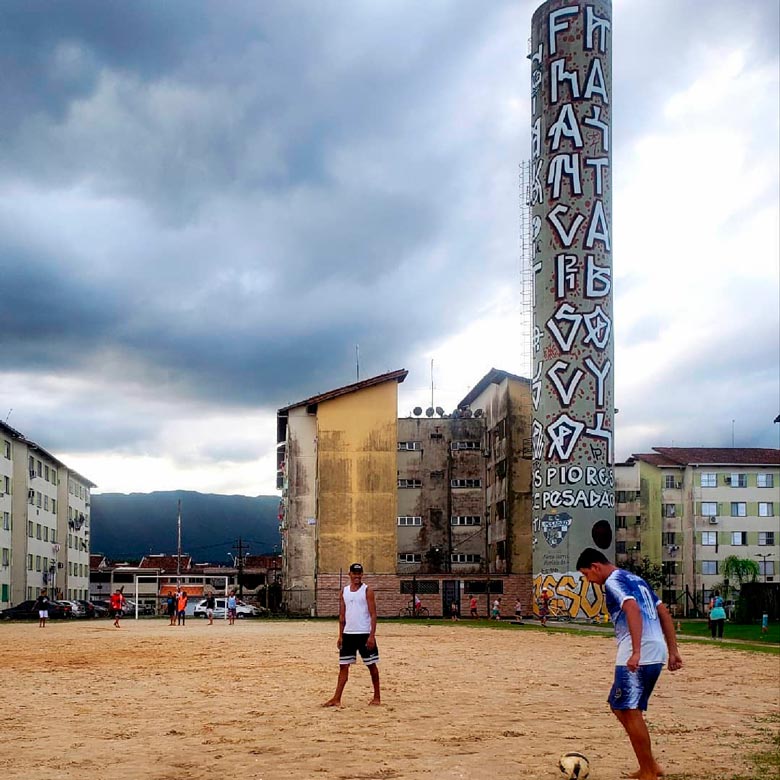 Today, this type of graffiti is gaining some proponents in Europe. To investigate the current development of vertical graffiti on the old continent and the different forms it takes, we’ve interviewed three of the most representative writers, from Berlin to Marseille and Valencia, namely Ikarus, Crapule and Wins.

Nicknamed the vertical destroyer, the Valencian writer Wins could be considered a pioneer in terms of vertical graffiti in Spain. As well as his commitment to this facet of graffiti, Wins is known for transferring his style of pieces to a vertical format without skimping on details. 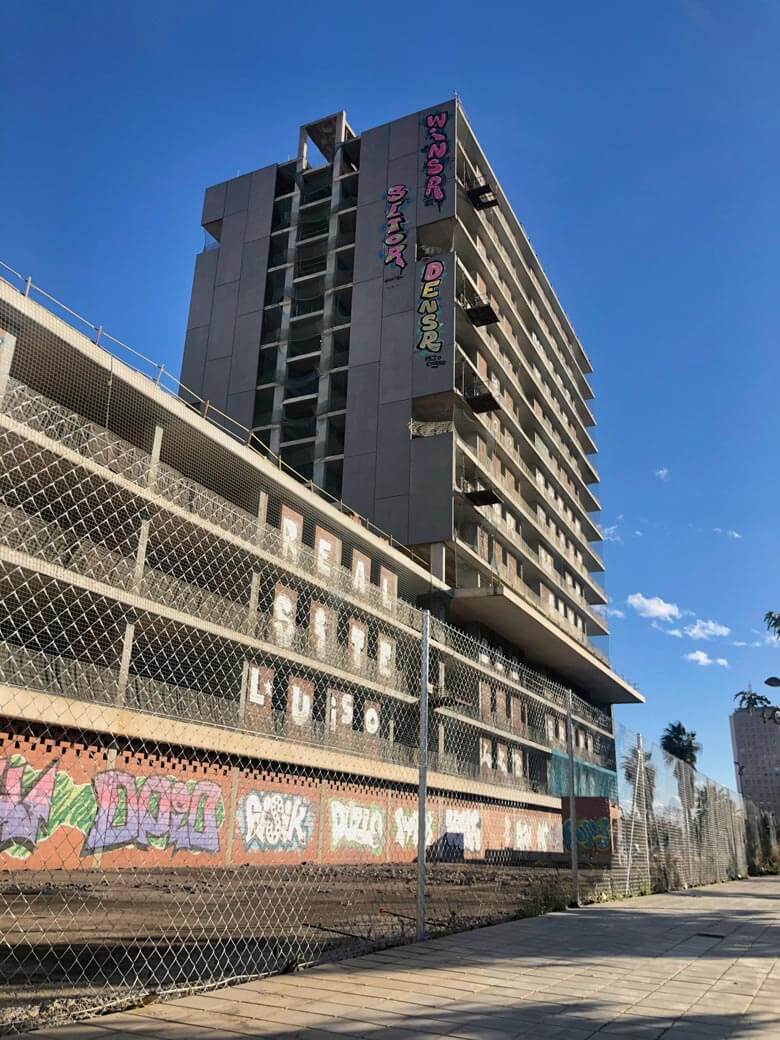 “Luckily, I’ve not had any problems whilst abseiling, but I’ve been informed of what can happen and the worst problems come from being caught painting.” 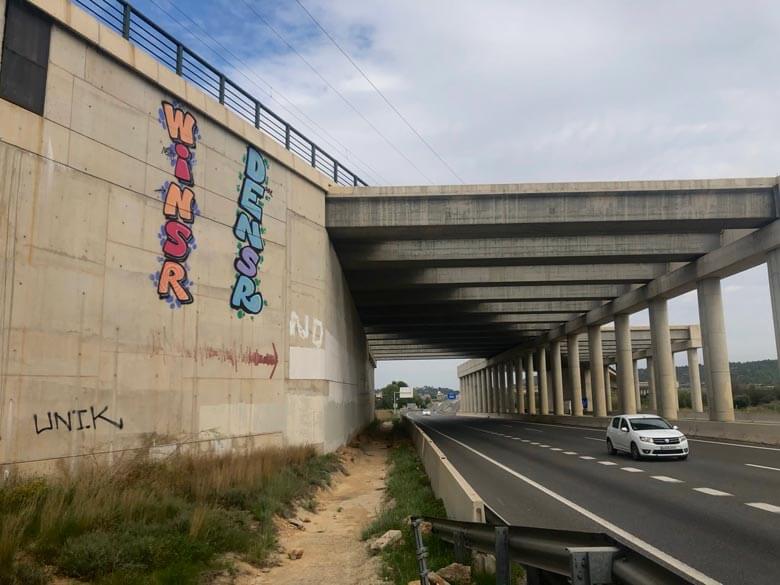 “Vertical Destroyer” started with me. Little by little I began to teach friends and kids from Valencia how to use ropes to paint.

It’s always been graffiti that has motivated me. My life has always been about graffiti, and I’ve always looked for new ways of painting, different from other graffiti artists.

I noticed that no-one had dared to do vertical pieces in Spain and I started to investigate how I could do it myself. I’ve been gradually improving my way of doing it and looking for better spots in Valencia ever since.

The first thing is to look for a good spot that can be seen from as many angles as possible. When I already have the spot located, I find out how to get in. I look for the way in, or open one myself, and find the place where I can put the device to hang from. When everything is in place, I go back the next day with all the material and paint. Once I’ve assembled everything, there’s nothing left to do but to hang off and paint a good piece.

Luckily, I’ve not had any problems whilst abseiling, but I’ve been informed of what can happen and the worst problems come from being caught painting. 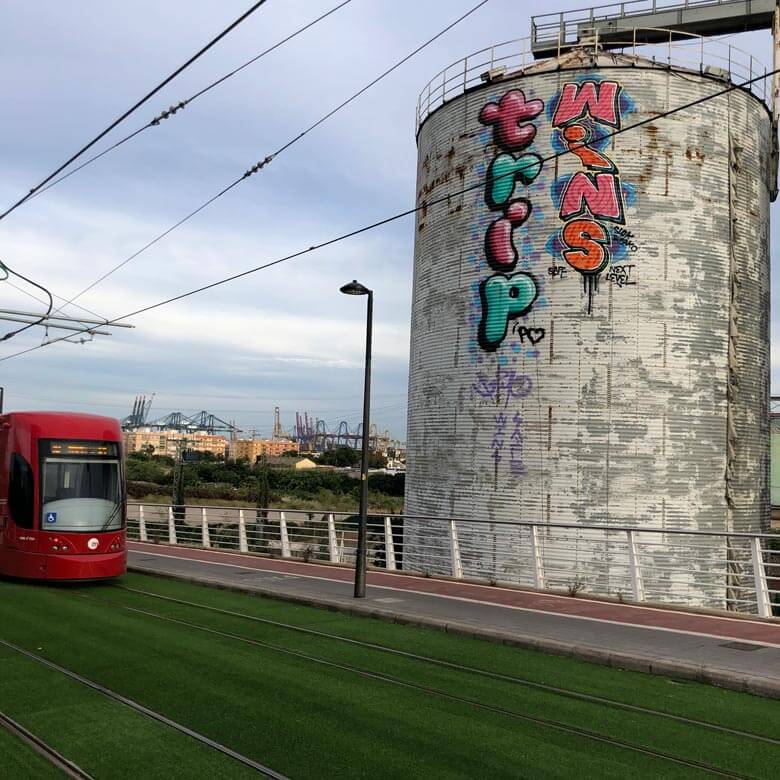 If there’s a European city that champions abseiling and graffiti, it’s Berlin. And there we find Ikarus, member of the NHS crew. He’s an authority on the subject, also fond of all kinds of urban adventures that involve risking physical harm – from urban exploration to metro surfing. 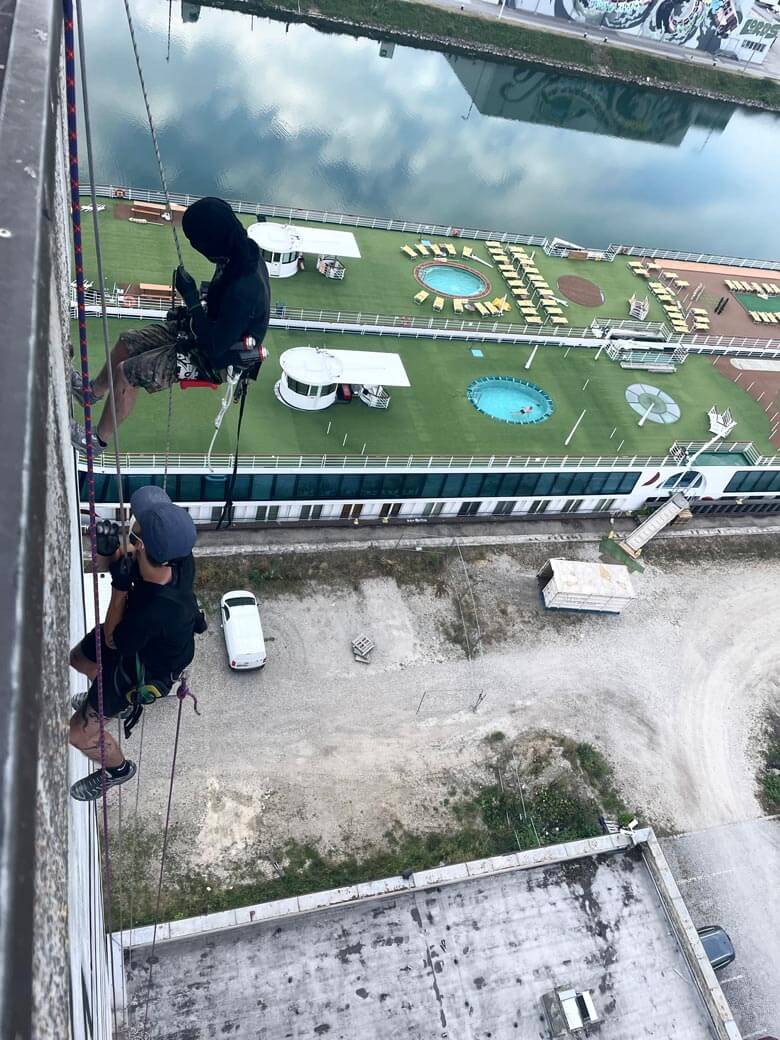 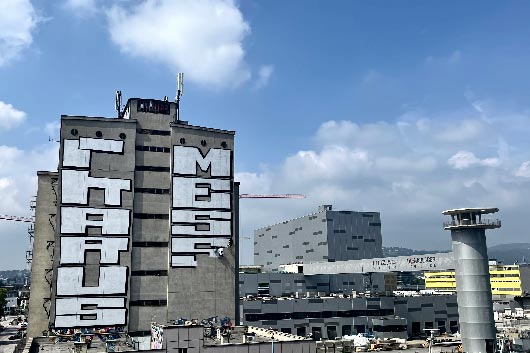 I don’t consider my graffiti as pixaçao in general. My old crew Berlin Kidz (founded by Paradox) brought pixaçao overseas, and we transformed the style into a European style, but still pixaçao, with colors and new style-elements.
Since the Berlin Kidz split up, I quit using colors and began to do my pixos only in black. It’s a homage to the origins in Brazil, where they just paint in black.
Pixaçao is a world of its own, because it has its own typography and spirit.
When I think about doing graffiti, I think about doing a piece, a throw-up or a little tag.
It’s possible as well to mix those two, for example when you do a pixo with a outline.

Every graffiti practice has it’s own risks and components. The things I do imply risk and urban exploration. To reach the façade of a building means to find a way through closed doors and into the attic above it.
To use alpine safety equipment in an urban environment requires knowledge of the spot and equipment to prevent risks. For me, taking risks and exploring the urban environment is a vital component of the graffiti game.

Metro-surfing makes it possible to reach difficult spots. I began to do huge tags on walls from the roof of the train whilst it was parked at the station. So it’s possible to create projects connected to Metro surfing.
The other part of it is just spontaneous and not planned. There was a time where it became a daily routine of my life. I did it for long and short distances, in winter and summer, it just didn’t matter. I don’t recommend it.

Once I wanted to abseil down a 120 m building in berlin. When I started, I quickly recognized that my Grigri, the abseiling device, wasn’t made for such heights. The rope was too heavy for the little device, and I needed a more professional and stronger abseiling device.
The problem was that I didn’t have the equipment to go back up again, so I had to go down all the way under difficult circumstances and risky conditions.
Through experiences like this you learn how to prevent risks to plan actions with more foresight. 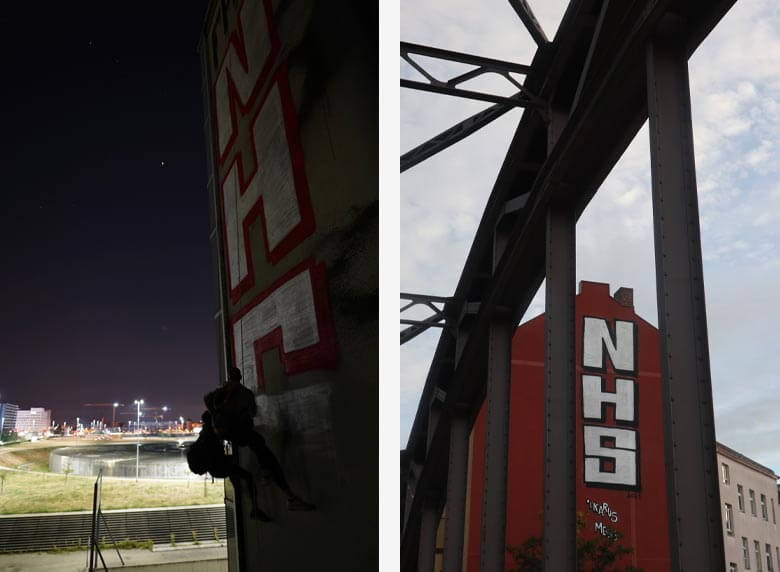 A native of Montreuil, his passion for graffiti also extends to the graffiti lifestyle, fashion and, of course, photography. That’s why he’s a representative architect and documenter of French vertical graffiti. 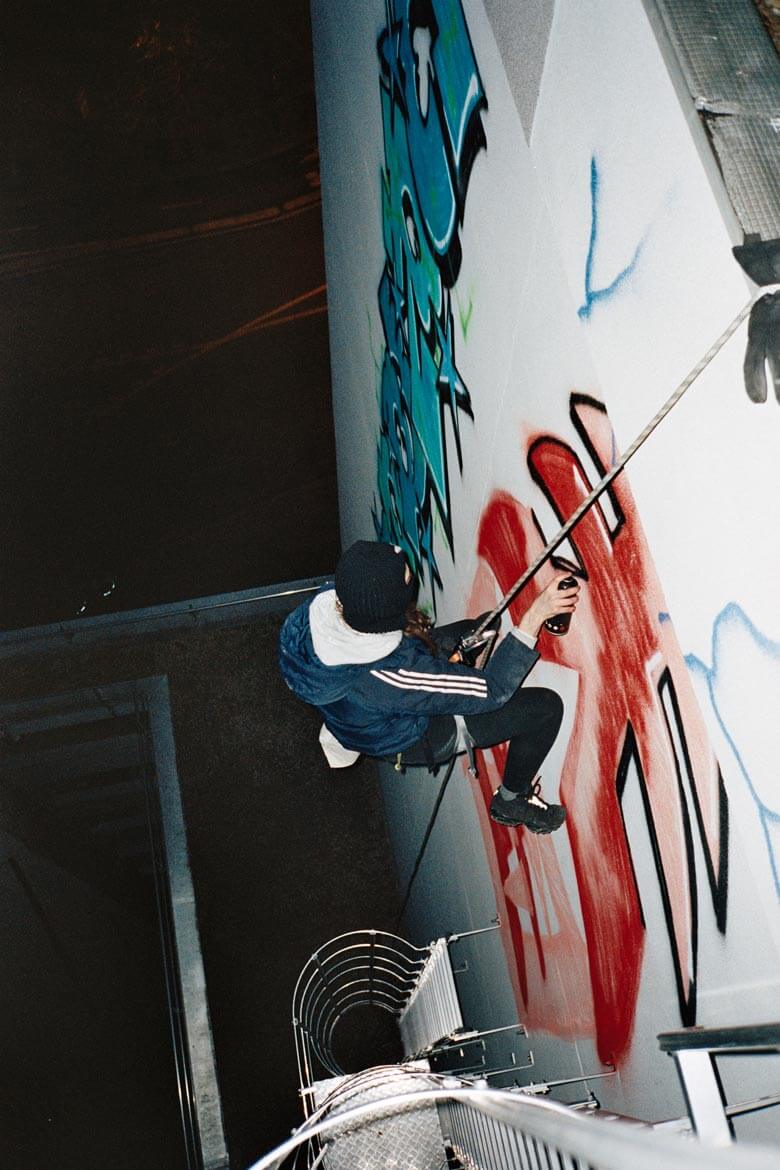 “I live consistently with my time and if I share so many photos it’s because it’s part of the game. I want to capture the energy of this world and of this generation that’s so independent and creative, so that I can showcase it.” 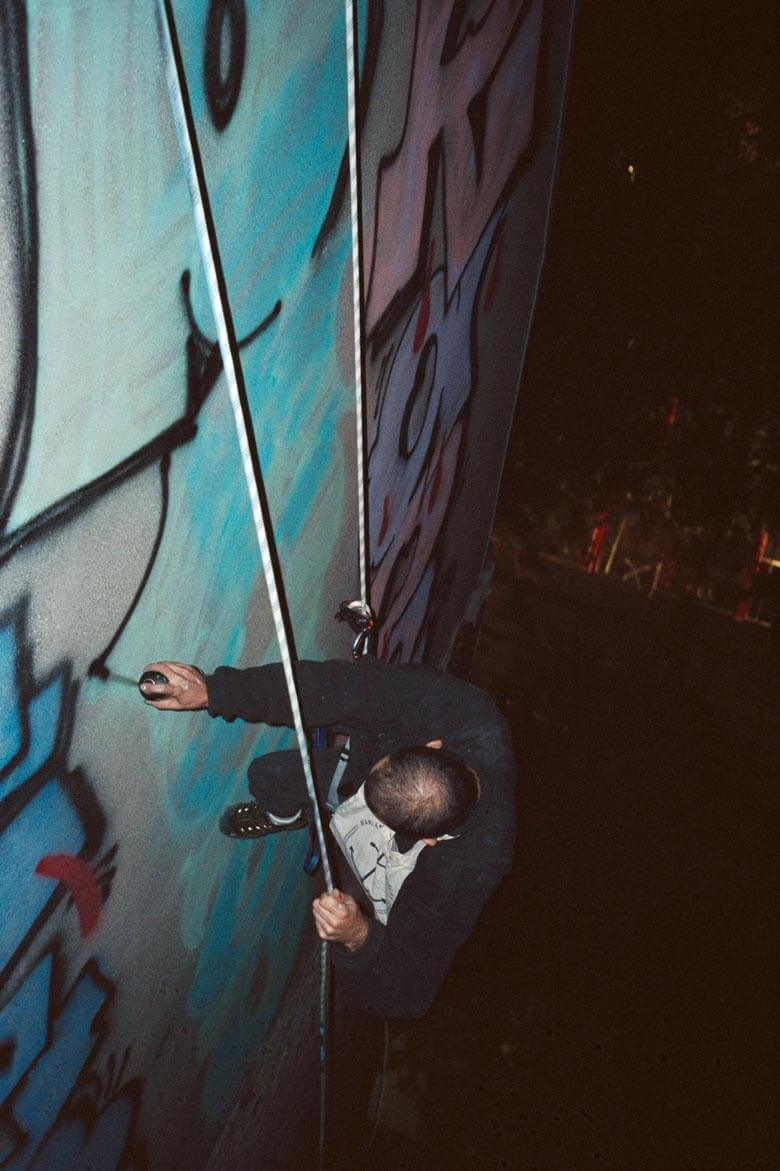 I don’t think there’s a tradition, or at least, not yet. I discovered it, like everyone else, on the Internet.
Really the first artist in Paris was Vilot, but it was thanks to Ecilop, who democratized the practice, when the scene became more serious.

Ecilop himself. I had already tried in my area, with a friend in Marseille, where I discovered climbing, but clearly it was he who taught me the tricks and forced me to get over my fear of heights. Lately we’ve been painting quite a bit together.

It seems difficult, but in reality, it just needs a lot of preparation and organization. There is no particular stage more difficult than another; I think it’s great to do this as a team, but also alone. It all depends on your mood.

Yes, in fact, I tried a lot of things. I like being able to evolve in my practice and abseiling has opened up many new possibilities and an even bigger playing field. Even the way you paint changes, the shapes of the letters, the sensations. It’s very satisfying.
I’ve been quite restless since I was a child, I liked to climb everywhere, so I think it’s the next logical step, especially in a city as busy as Paris. Vertical graffiti allows me to breathe away from the mortal world.

I define my work as something very free. I think it represents a way of life, of freedom in this burning world.
My photos represent my generation, the environment where I operate, graffiti, which encompasses many other things of the underground, such as parties, free life, etc. I live consistently with my time and if I share so many photos it’s because it’s part of the game.
I want to capture the energy of this world and of this generation that’s so independent and creative, so that I can showcase it.
I’d seen my friends do a lot of stupid things, each crazier than the last, when it occurred to me. I thought to myself, “They’re so cool that the world should know!”

I think Paris is the best city for it, but my favorite city in terms of adventure is Marseille. There is a unique energy there, a beautiful light. It is a multicultural city with a lot of history.

Reptil Clothing is a project that I launched five years ago, between my studies and my work. It was a project that brought me together with my friends. We needed to create something for ourselves, for us; we had a real need, the desire to define ourselves.
We often collaborate with artists from the graffiti world with unique limited-edition projects. It can be textile but also editorial or video. Personally, I take care of the artistic direction, especially the photos, projects, organization and communication. In short, a little bit of everything, but our team grows, and our projects accumulate. So many wonderful things to come.
I think Reptil’s strength lies in its authenticity, unlike other street wear brands. We are not inspired by countercultures; we try to represent our own and make it known. 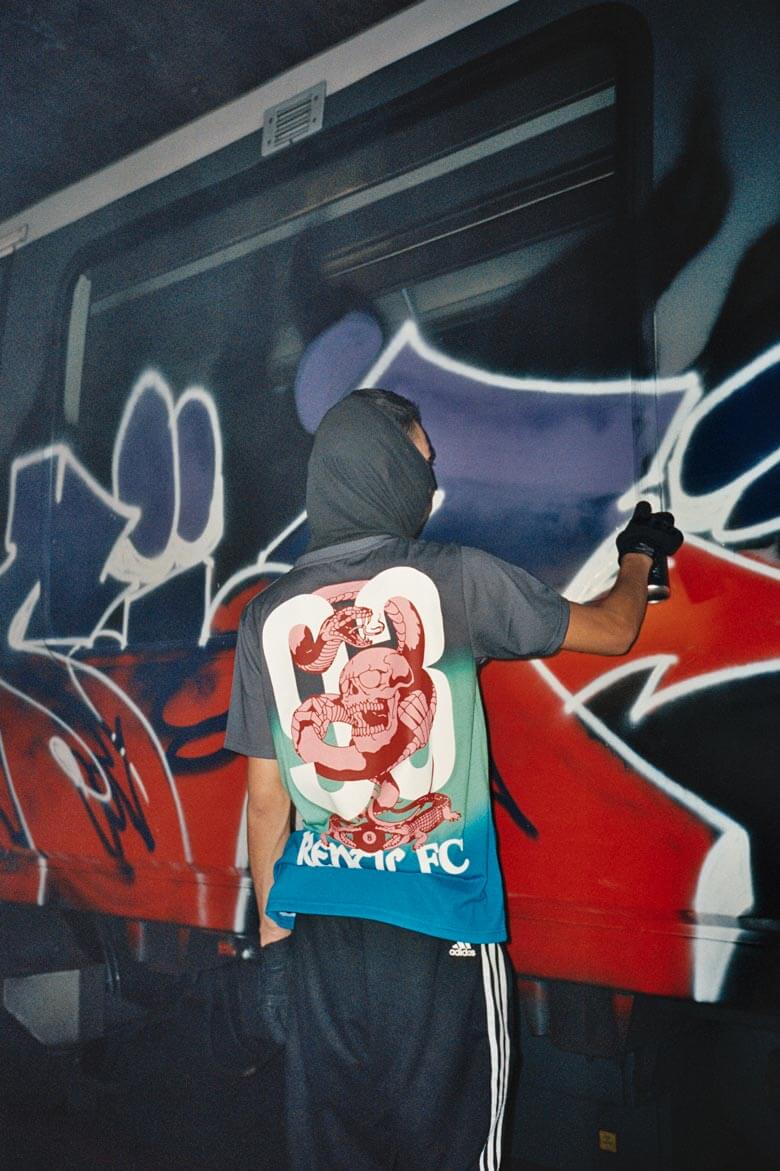 *At Montana Colors we admire and respect everyone pushing creativity and overcoming challenges. However, it’s our obligation to remind you that we do not intend to encourage anyone to attempt any creative act that could put their lives at risk.