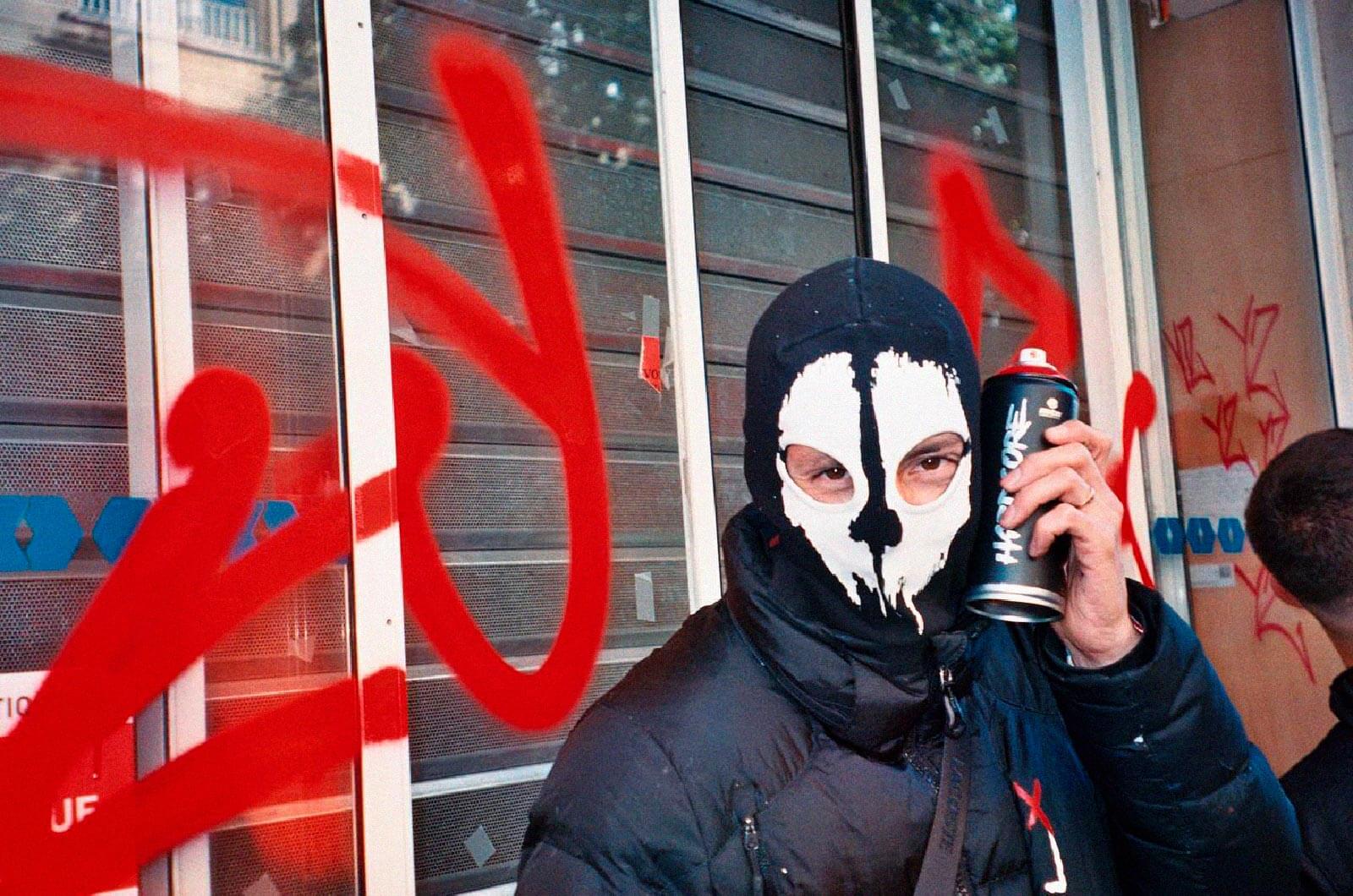 In recent years analogue photography has become quite popular in the world of graffiti. It seems to have established itself as the most suggestive means of transmitting the purity of graffiti in its rawest dimension. In parallel to this phenomenon, the Parisian graffiti scene appears to be renewing its personality through this lens, and thanks to artists such as _poushka, who portray a lifestyle that recovers aesthetics from past decades in a fiercely current context. We have interviewed this photographer to find out a little more about where this dark and dirty dimension —that seems to have already become a trend— comes from. 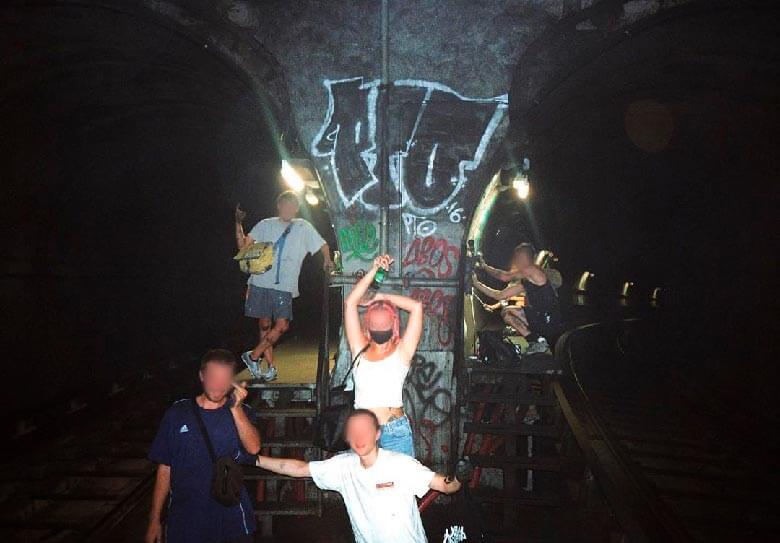 Who is Pushka?
Pushka “Пушка” means rifle or cannon in Russian, and in old French slang, a pushka is a pistol.
I found this nickname catchy and impactful, and that’s also what all my friends call me. Therefore it stuck.
First of all, I am a graffiti artist. That is what led me to analog photography, a field in which I started two years after I started painting graffiti when I found an old camera at home. The style of analog photography motivated me a lot.
Nowadays I have a job that has nothing to do with my artistic activities but that doesn’t prevent me from continuing; photography and graffiti are an integral part of me.

How would you define your style of photography?
I have never adopted a particular style of photography. Sometimes I call it Street Photography because what I photograph is mainly related to the world of graffiti, which is a discipline that is mainly practiced on the street.
In fact, my goal, above all, is to document the moments of my past life in the realm of hip hop, looking for that old school touch that we find thanks to analog photography, or also with garments like Lacoste or Nike TN.

“That is why it is important for me to try to not only document what I experience in this world.”

I’ve always been a fan of the photos I saw in old graffiti magazines from the 2000s, so I wanted to get as close to them as possible.
The objective is to recreate my environment and where I take my photos, essentially to try to convey what I feel when the actions I photograph take place. The authenticity of analog photography suits me more than any other way of capturing moments, thanks to its graininess, for example, or even the fissures of light that give photos that authentic, colorful and lively aspect and that distances itself from the flat and empty appearance that a digital photo can have. 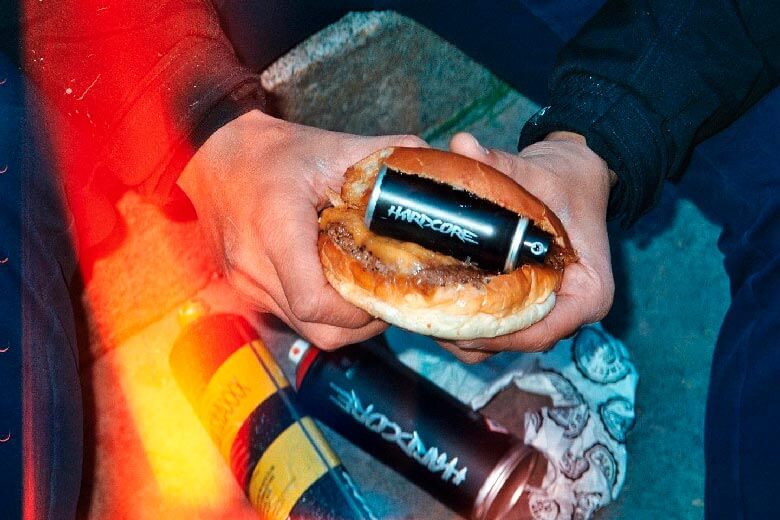 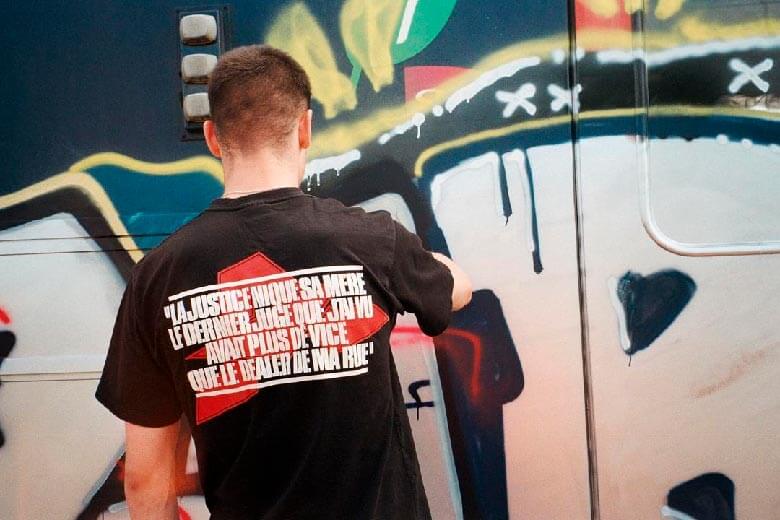 How important is graffiti in your subjects and which writers do you photograph?
As I said before, the fact that I started with graffiti before photography necessarily creates a link between the two; my photos revolve almost exclusively around the world of graffiti because that’s where I come from and where everything started. That is why it is important for me to try to not only document what I experience in this world, but to also feed my Instagram account so that people can appreciate it, allowing those who are not familiar with this environment to discover the depth —the aesthetic side— that I sublimate with my photos. If I manage to express all this it is because I am surrounded by writers, some of whom are my close friends. By spending time with them I receive all this creativity that brings together photography and graffiti. Indirectly they are a bit like my models.

“This demonstrates the fact that it is a very open environment where everyone —without even knowing each other— manages to get in touch with the goal of sharing the same feeling and connecting through this underground passion.”

We often find the same graffiti or tags in my photos because I shoot my friends who I hang out with the most and who are part of my crew; especially the YZs and 78Ks. They all have quite a different style that allows me to diversify my photos. I also meet up frequently with many other writers, sometimes even from different countries, like Belgians, Spanish or Germans. This demonstrates the fact that it is a very open environment where everyone —without even knowing each other— manages to get in touch with the goal of sharing the same feeling and connecting through this underground passion.

Do you think there is a bit of a fad in terms of analog photography?
In the last 2-3 years I have noticed a resurgence in the importance of analog photography in current art movements. The vintage style is totally stylish to the point that the demand for it is growing exponentially. It is even becoming difficult to acquire film, and the prices have increased enormously.
As for my photographic style, it’s true that I notice a lot of young photographers looking to recreate the same artistic world. I’ve even shot some of my friends, but in reality it’s all part of a movement of which I myself am a part. I did not in any way invent this style of photography. I was very inspired by photographers of my own style (whom I will mention later). I simply refined my style, my vision over time, and my preferences. 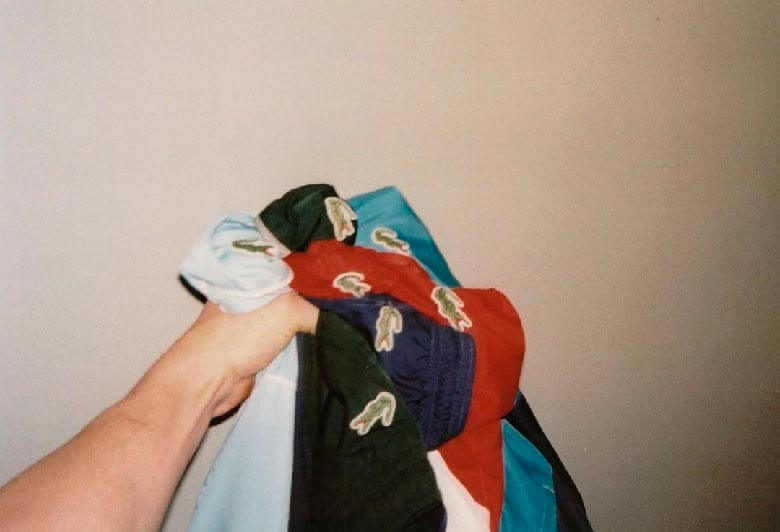 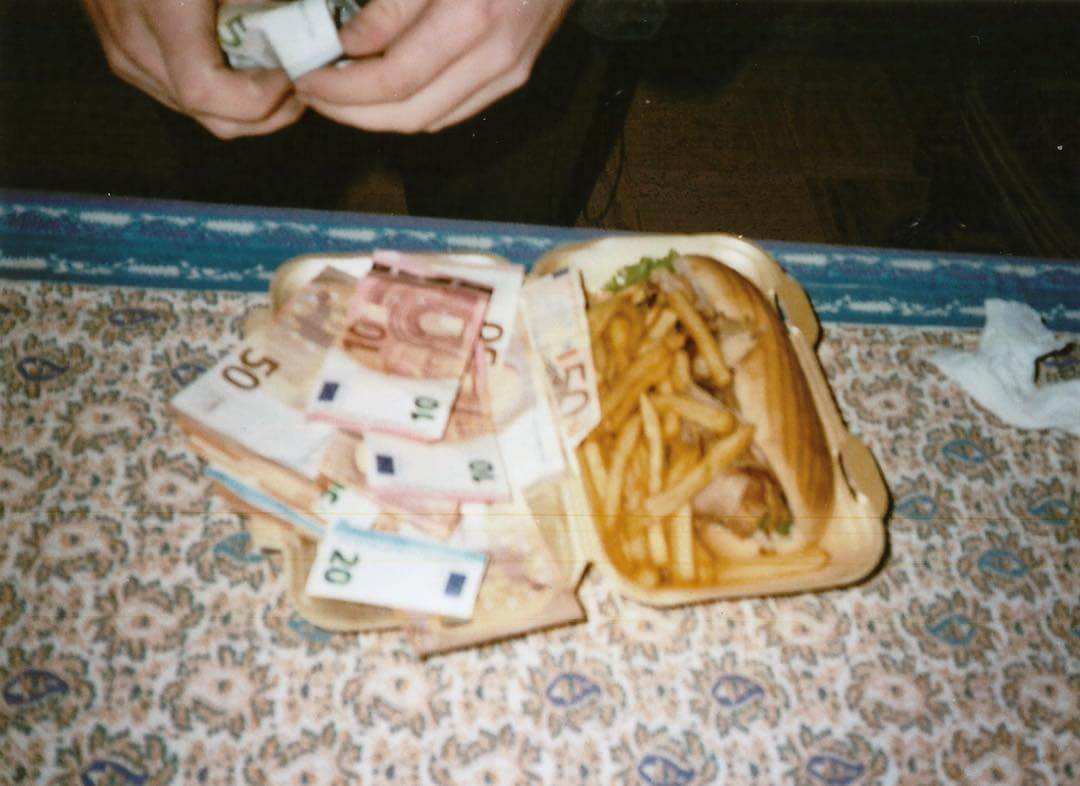 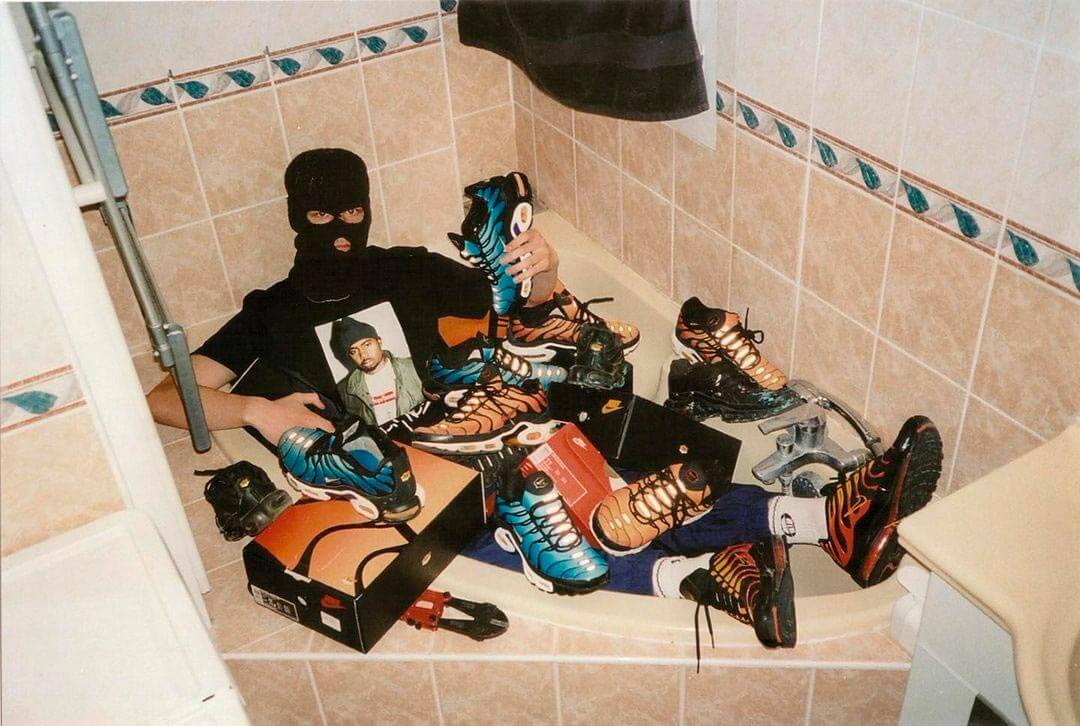 What aspects does it offer compared to other types of photography?
Film photography truly has a unique style that is impossible to recreate digitally without editing; a pure authenticity that obliges us to reflect on our photos and that creates an interpretation that is always unpredictable. That’s what I like about it.
When I start a roll, sometimes a month goes by before I finish it, and I can even forget its content. After 5 years I still have the same intrigue every time I receive scans and find out if this or that photo has the rendering I wanted, and sometimes it even comes out much better than I had imagined. I like to use old cameras that create fissures in the light. Many people who follow me and who don’t know film photography ask me how I get a particular rendering with my photos, sometimes with orange lines; and what filters do I use. I love to tell them that it is the beauty of the film that does this, in hopes of sparking their interest in it.

What artists do you recommend in this and other areas?
The artists who inspired me early on when I started out have quite different styles. Some were shooting clothes in urban settings, others were very focused on the bike life of French neighborhoods (especially Escalopeviandehache y Dadoummmmm), others were more interested​​ in atmospheres and graffiti. I think of Toni Brugnoli, who is one of the photographers who inspired me the most with his photos, always integrating more and more pizzas and TN’s with an Italian style that I love. I could also mention the photographer Crapule2000 y Stefano, with whom I share the same vision of photography and whom I especially appreciate.
So I took what I liked from each of them, inspiring myself to try to recreate my own graphic identity while mixing the styles of the photos that inspired me.
I would also like to present the publishing house Editionsbinks that we created with one of my graffiti artist friends, this allows us to share the world of graffiti and photography with fanzines other than on social networks. 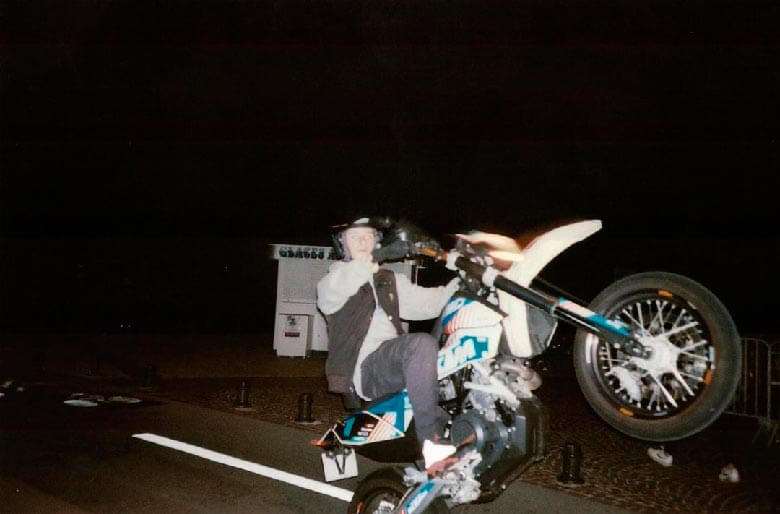 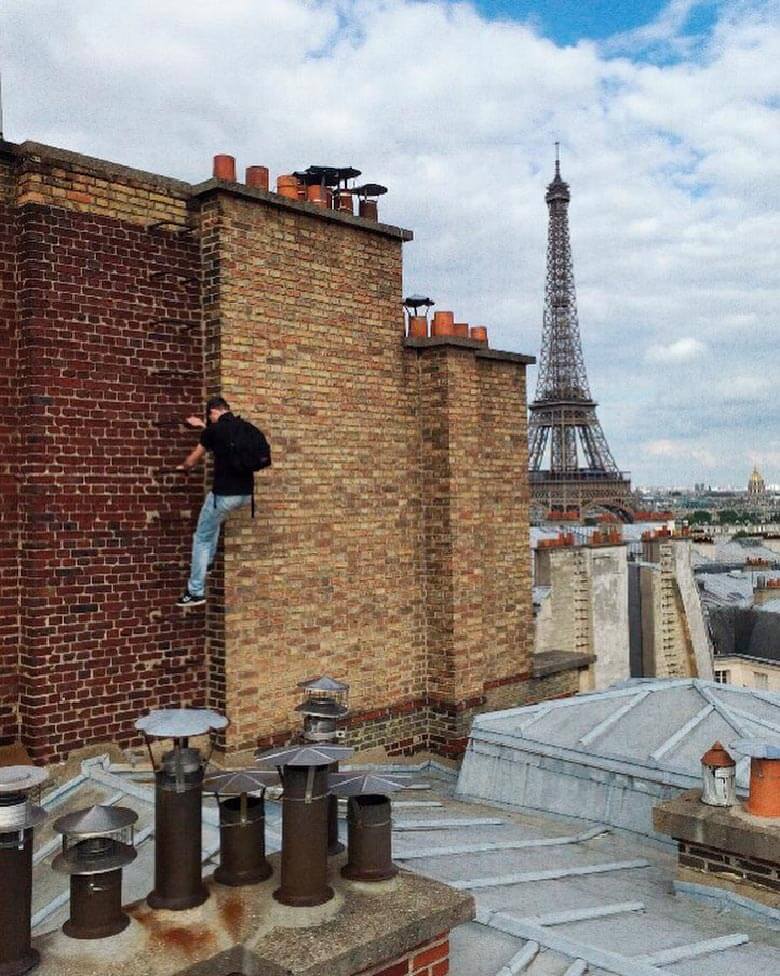 What precedents of the Parisian scene have influenced your work?
Coming straight from the western suburbs of Paris, my activities revolve around a suburban lifestyle that involves frequenting places and people that totally influence my photographic style. For example, I frequent the RER lines that I particularly like, instead of the Paris metro, even if I sometimes go there for a few trips, but it’s not the atmosphere I’m looking for. There is also a clothing style specific to the French suburbs that has quickly come back into fashion. I’m talking in particular about Lacoste sweatpants, Sergio Tacchini or very striking sneakers in this environment like the Air Max Plus TN.
Seeking to join these circles and with the aim of sharing this world in which I live, it was normal for me to include all that in my photos.
Despite this, I don’t have enough hindsight to really say if I have a “Parisian” style but if so, and if people feel that way, all the better: I want to say that it accentuates an assimilation to the environment where I come from and that I like.

“Everything stems from the need to share my vision of the artistic world in which my friends and I live moments, trips, and above all incredible sensations that I would not replace with anything in the world.”

Where would you say the aesthetics and attitude come from?
I think that everything stems from the need to share my vision of the artistic world in which my friends and I live moments, trips, and above all incredible sensations that I would not replace with anything in the world; the desire to express all the energy that animates us, not only painting in the street, but also using today’s tools like Instagram.
Of course, through my photos I seek to always be an integral part of this little-known movement that is graffiti, giving it life and allowing those who don’t know it to have a different vision from what they see on the street.
It is the desire to give a positive image (or not) and show those who ask themselves “Who are these people?” 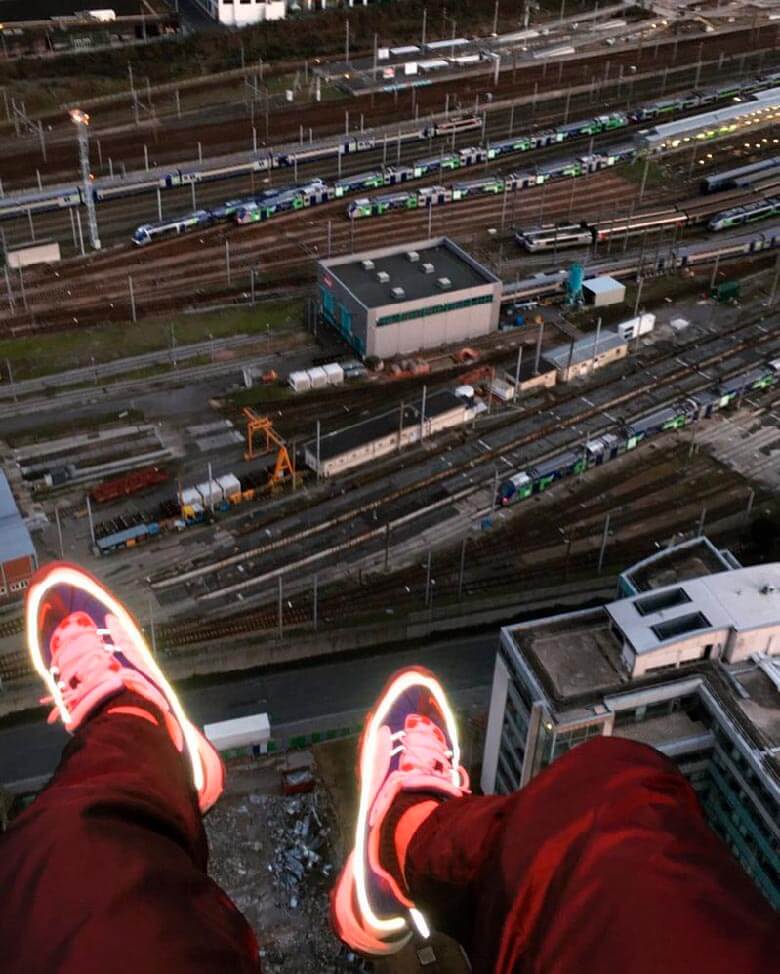 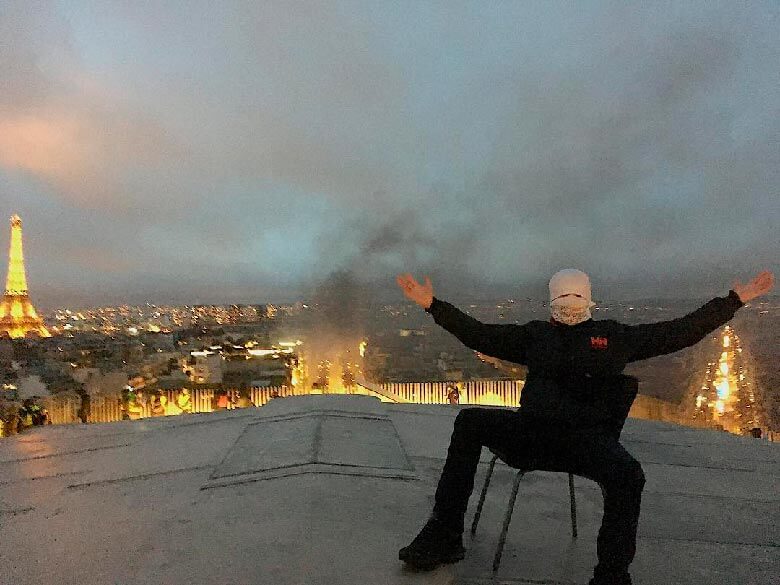