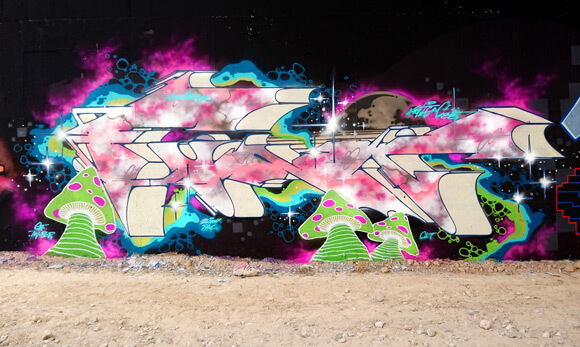 The UltraBoys member Koolfunc 88 explains some of the aspects he sees in his three favorite pieces, something we can not appreciate by just looking at the pictures…

My first “ace” is an instant crush from last summer (2016).
It’s unusual that I like what i’m doing while I’m doing it. I have to see a picture of it to properly appreciate it, but I enjoyed this one from start to finish.
The situation was ideal: Santa Magnetica Islands, perfect weather, a perfect, not-so-legal, huge spot along the railway tracks, a nice amount of cans and paint, and of course the best ingredient – the best partners…UBoyz and 333.
This time I chose to leave the almost virgin, black background and put my messy color vapors around the piece. It’s a light-colored piece and even the outline is blue. I kind of like this massive right-sided 3d for which I have a little anecdote; Maybe you can’t see it in the picture, but this one is really big and of course I ran out of the ivory cans… but the great captain Demski knew how to create the perfect matching color out of nothing. He mixed a few empty cans together with a “mexican” trick that including a needle and I was able to fill in with a brand new can of the exact same color!!! These kind of things make my day….
It has that Acid feeling I like with the flashy schrooms and hot pink fumes. For me it’s a good combination of old school-meets-cosmic shit-meets-futuristic shapes. Definitely a recent favorite of mine. 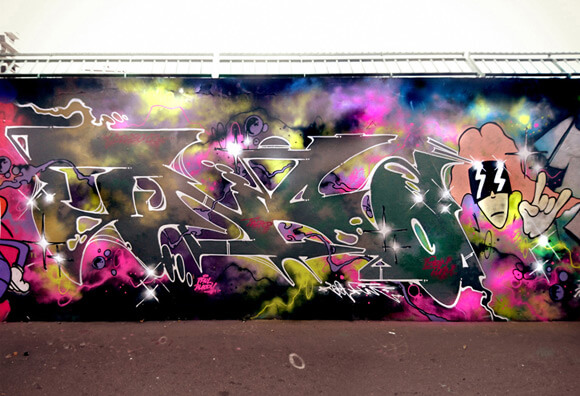 My second “ace” was done earlier this year (2016) in my neighborhood.
Painting in the streets of Paris 18eme is something important to me as I’m trying to perpetuate the spirit of old Paris graffiti (80’s).
To me, there’s nothing better than the origins of Euro Graffiti from Paris, A’Dam, London, Berlin… and painting there in 2016, doing pieces that are inspired by that era is like traveling through time. I like my graffiti to be “Retro-Future” since we introduced this so-called “Galactic-Style” in the early 2000’s.
This piece pretty much demonstrates what my style is made of; mostly vapors, random half cans, one line outlines and a standard cap.
I was painting with whatever I could find, and even a blind man could have chosen my colors…This is a perfect example of “warpaint”!
I like this basic old school Subway-art inspired character and think it fits pretty well with the flashy, heavy-metal scene.
It was another good day painting, sipping beers in the hood with a whole bunch of friends; the best things in graffiti! 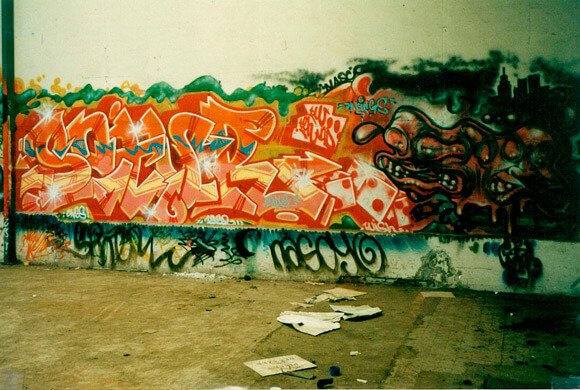 For my last “ace” I pick this old “Satur” piece from the vault because it means something to me.
It’s from my childhood in 1992, in a Paris suburb.
This abandoned, industrial place along the railway tracks that we broke into was “our” playground for almost a year. We spent most of our time right there painting, chilling, breaking things and having fun!
It was also an experimental zone where we took time to try new things, and new styles. I think we painted every space available until other writers found out about the spot.
Talking about the piece itself, I still love it even if it’s goofy and clumsy, and I love the feeling of the film photo (no filter here!).
My partner in crime, Ryck, did the blob-style characters on the right side. Obviously, it is not a piece I would refer to as being my personal style because it’s an early bird. I had only been painting for 3 years when I did it. However, I still have love for it mostly because of the nostalgia from this era that it gives me and it doesn’t look that bad after all for a 25 year old piece.