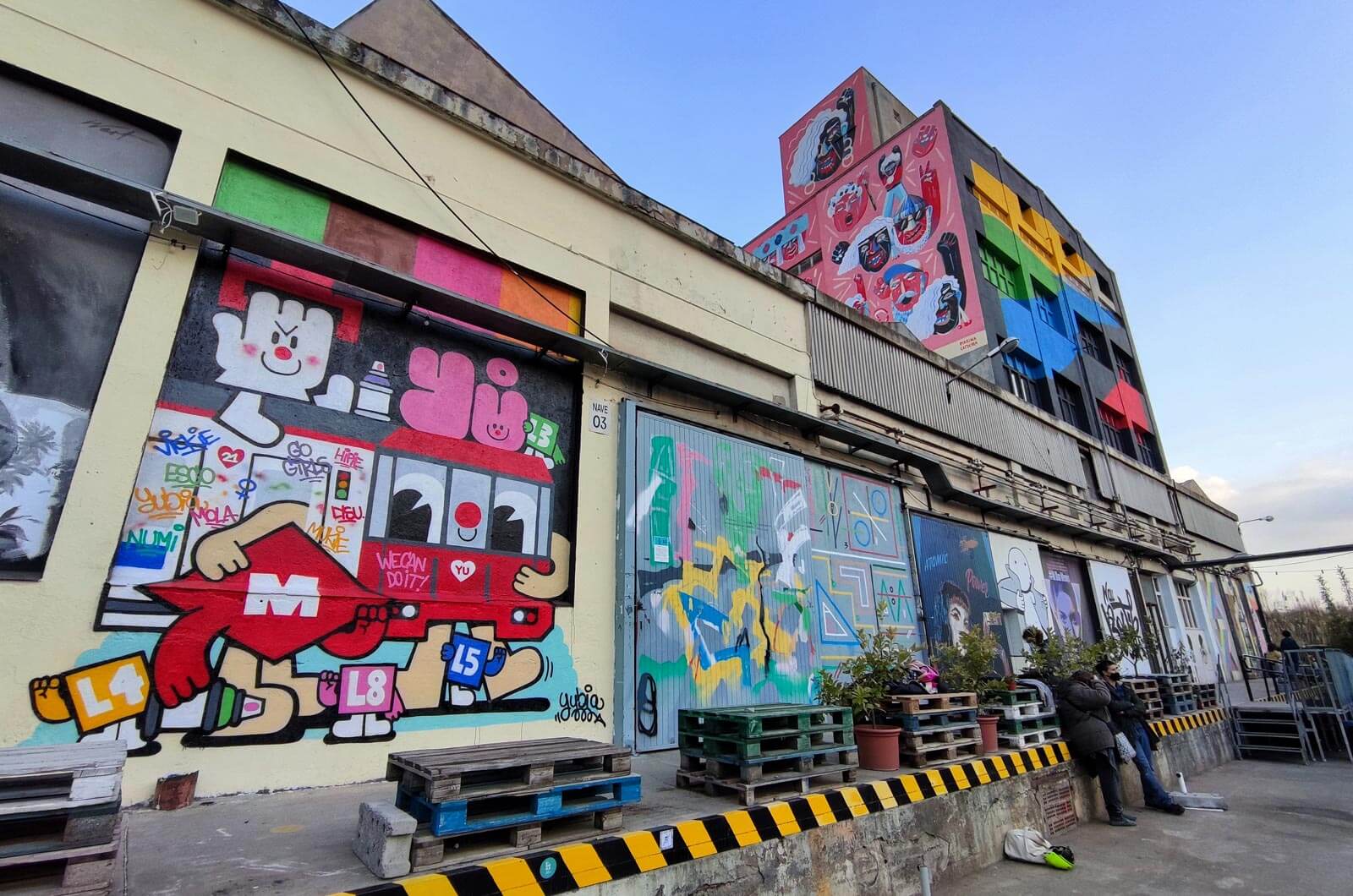 Last weekend, the B-MARKET took place in the Nau Bostik warehouse complex in Barcelona. A part from the art market, the event organized by the B-MURALS platform included workshops, talks and live mural painting. Today we present one of the highlights of the weekend: an outstanding piece by Yubia, documented by the photographer Fer Alcalá. We got a chance to sit down with the artist to hear about her experiences painting and running a stall at the successful urban art gathering. 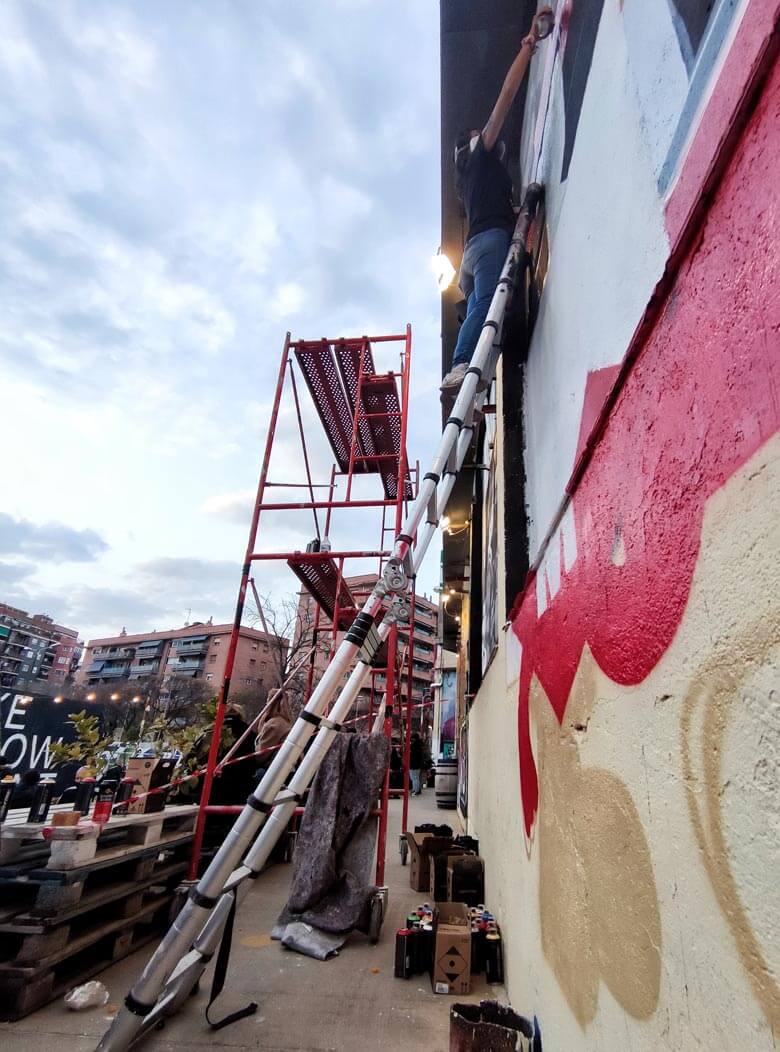 How did the B-MARKET go for you, personally?
Very well. Lots of people came down, even though the weather wasn’t great. Right now in Barcelona, people really want to go out and do things, and it showed.
I didn’t even have time to take a walk round and see the rest of the artists who were taking part in the market or painting.

“There were a couple of people who made me genuinely emotional.”

Did you enjoy meeting your followers in person at your stall?
It was fantastic to get the good vibes from people who were interested in my work. At the end of the weekend I was overflowing with love from everyone who came to the market: from friends to internet contacts and people who discovered me at the B-Market.

I’m a bit shy at these events and sometimes I don’t know what to say to people. Sometimes it stops me from enjoying myself. But in the end, obviously, it’s very rewarding to receive support from the public. There were a couple of people who made me genuinely emotional. Actually, that’s not unusual, I get excited pretty easily! 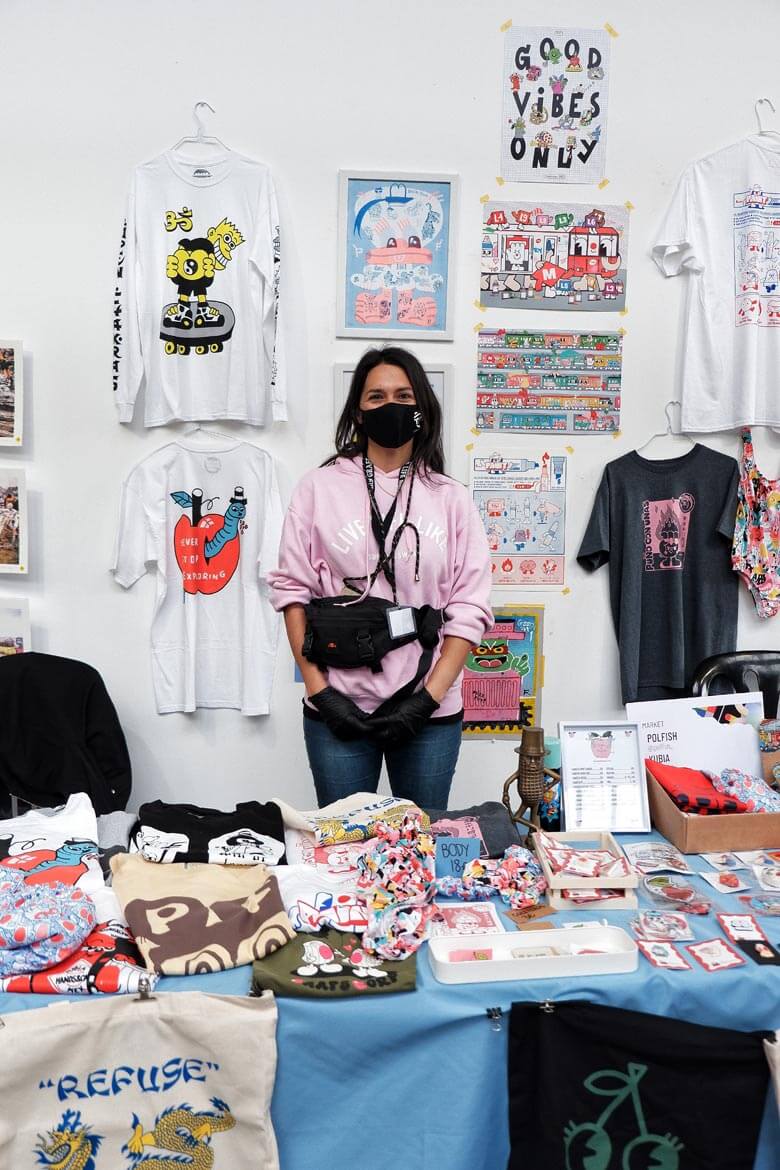 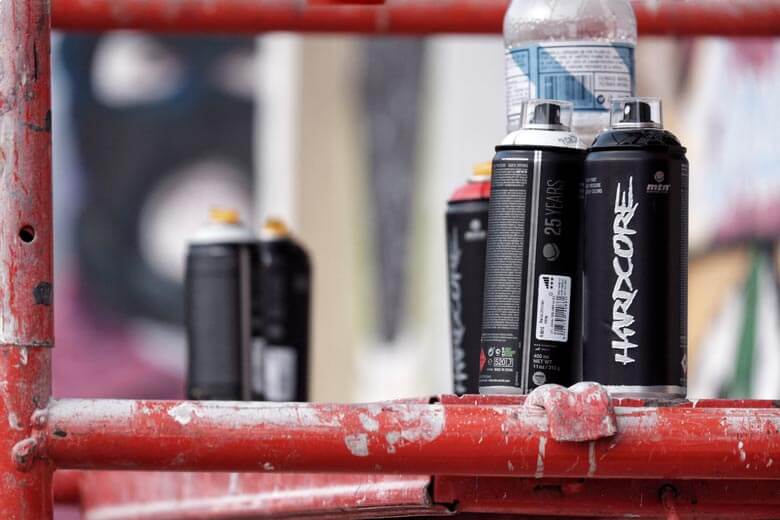 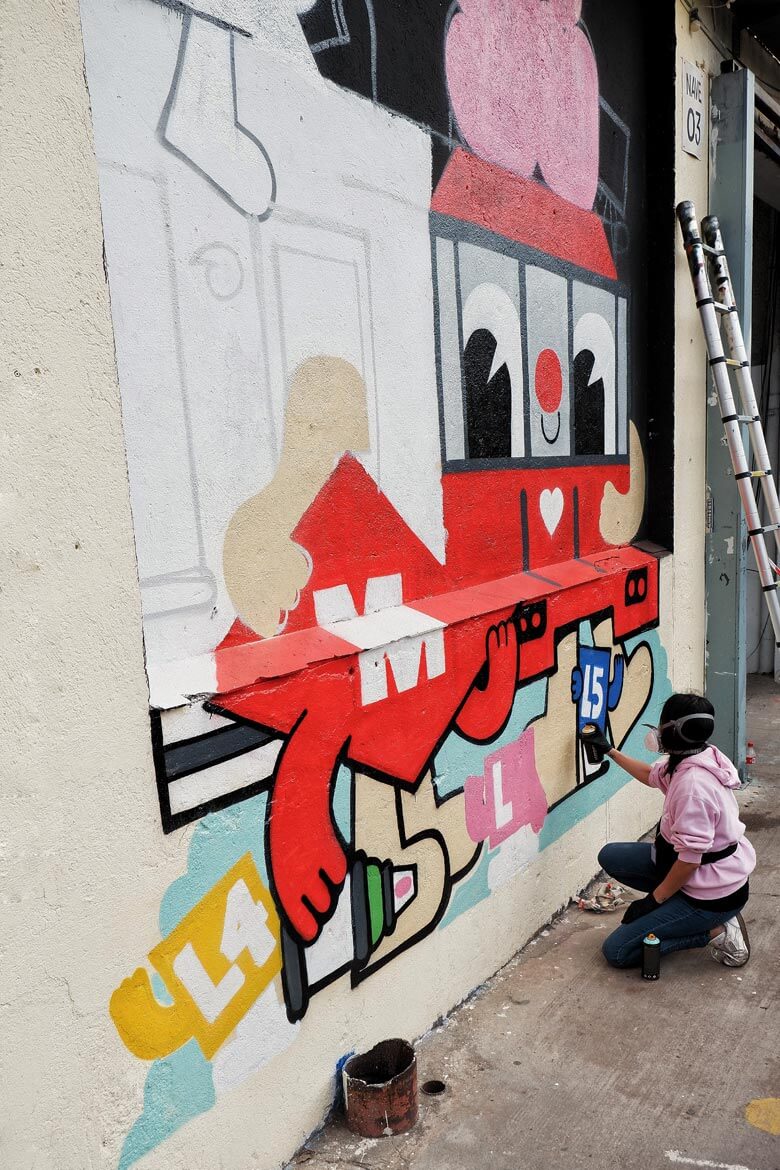 “It was totally different to painting a piece or drawing a picture. I just wanted to paint my designs on a large scale.”

What can you express on a wall of this size that you normally can’t with your graffiti or illustration?
It is the first time that I’ve applied my illustrations to such a large mural, and I was looking forward to it. It was totally different to painting a piece or drawing a picture. I just wanted to paint my designs on a large scale.

You are more used to painting in small groups. Did you like painting in front of an audience?
Honestly, I prefer not to have an audience. As I mentioned before, I was very grateful for the positive feedback, but I’d rather paint alone.

Let’s talk about the content of the mural. What does the Barcelona Metro mean to you? Why did you choose to include lines 3, 4, 5 & 8?
I love trains. I’m a collector of train memorabilia like maps, signs, stickers and so on. I’ve been painting different models of trains that I like for a while now. The opportunity to make a mural came up and I chose that design. The metro lines I painted don’t have a specific meaning although in the original sketch, they do. In the final mural, I chose the ones that best fit the colors. 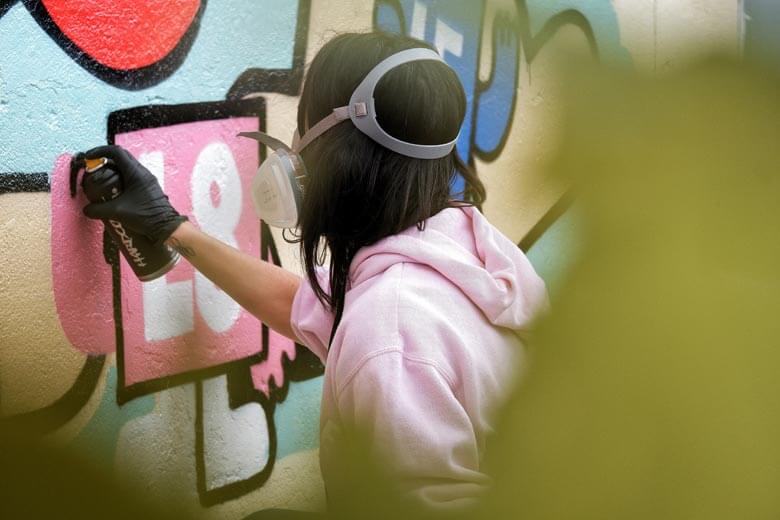 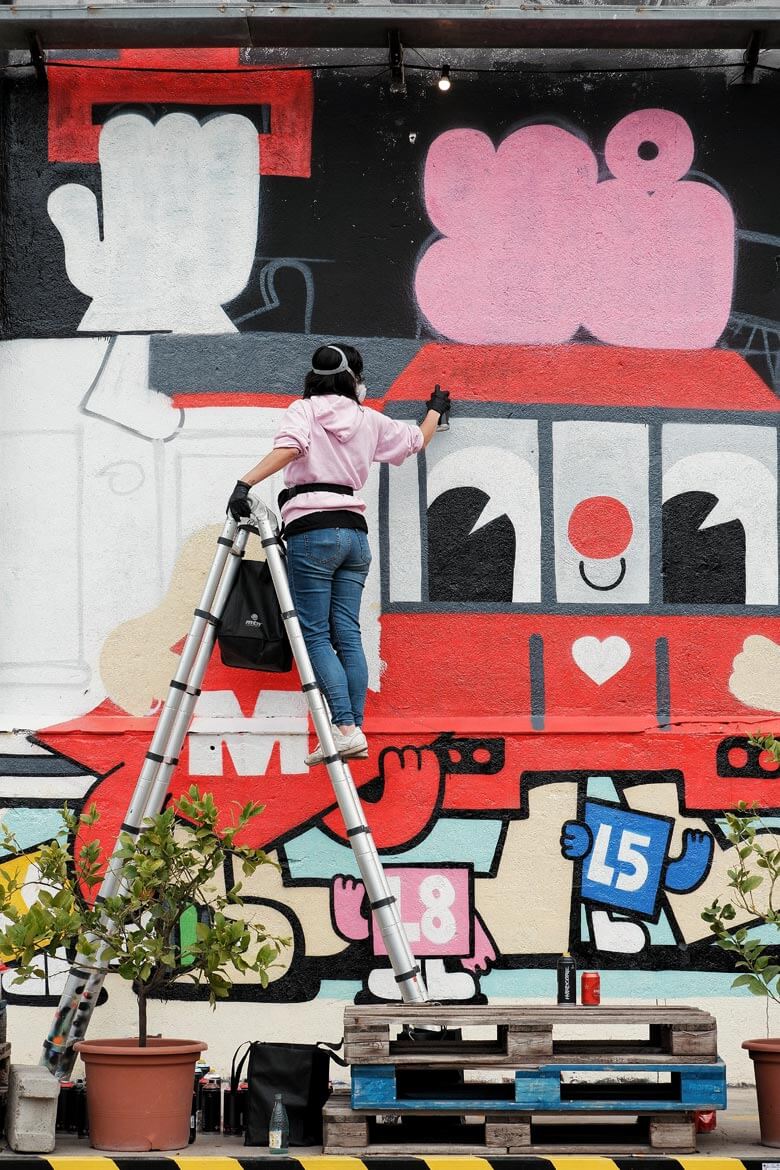 Why did you choose to shout out the writers whose tags appear on the subway?
I thought of that at last minute. My plan was to include tags of my friends who’d come to see me at the event, but in the end, and since it was the day before International Women’s Day, I wanted to pay tribute to some of the female writers closest to me, so in reality the piece is dedicated to all of them. They deserve it. It’s a tribute to them, for putting up with everything we have to go through.

“It seems good to me that more artists from the world of illustration or painting are invited to take part in projects like this. For me, graffiti is in the street XP.”

Do you think there should be more murals with clear graffiti influences in festivals and places like B-MURALS?
Well it depends, I like both illustration and graffiti, I think it’s not necessary unless you specifically want to have graffiti at mural festivals. It seems good to me that more artists from the world of illustration or painting are invited to take part in projects like this. For me, graffiti is in the street XP. 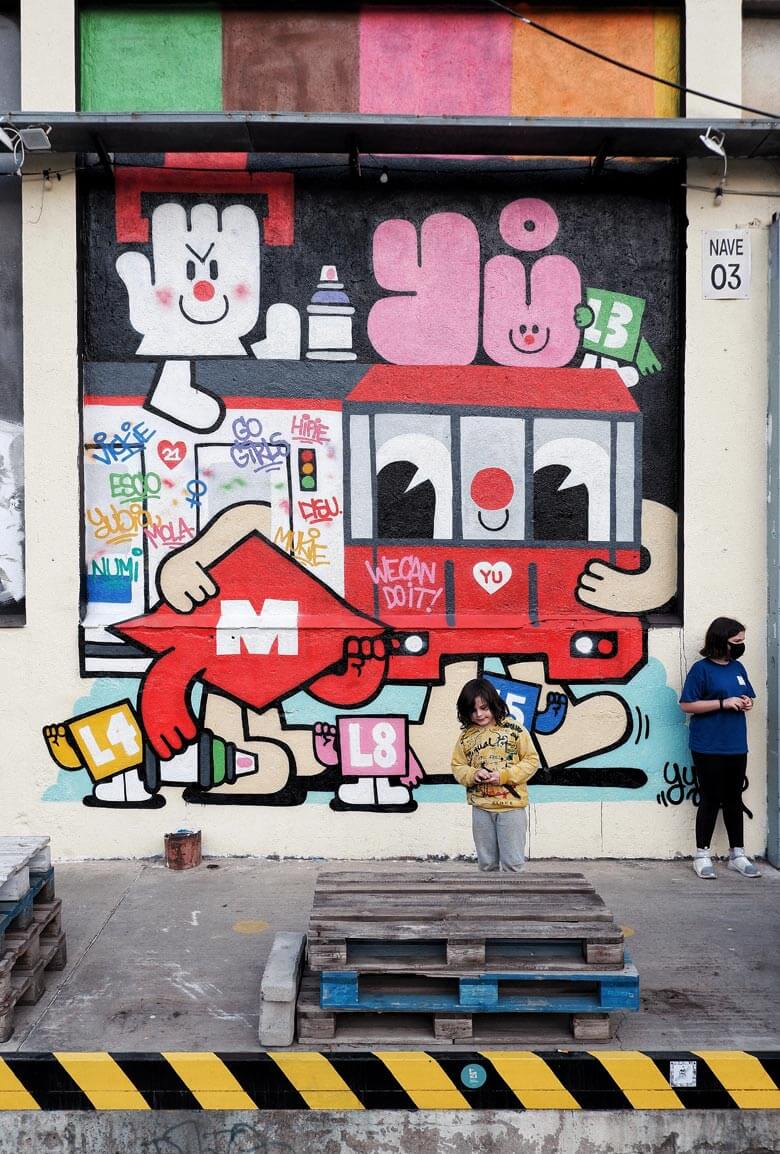 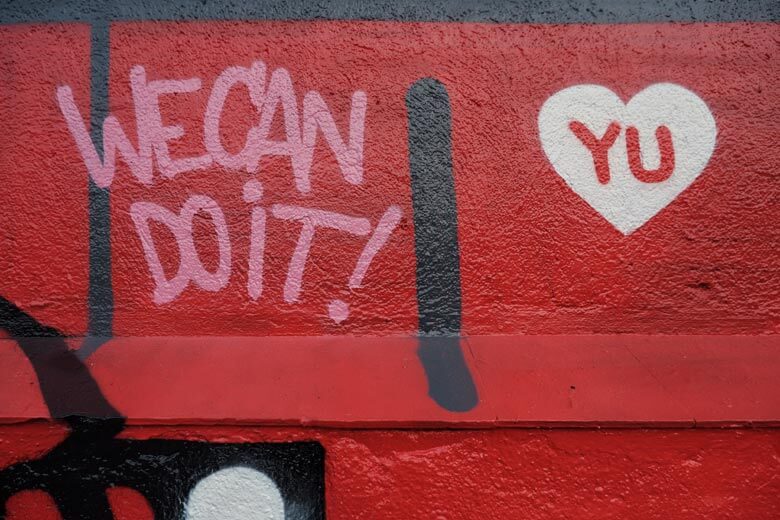