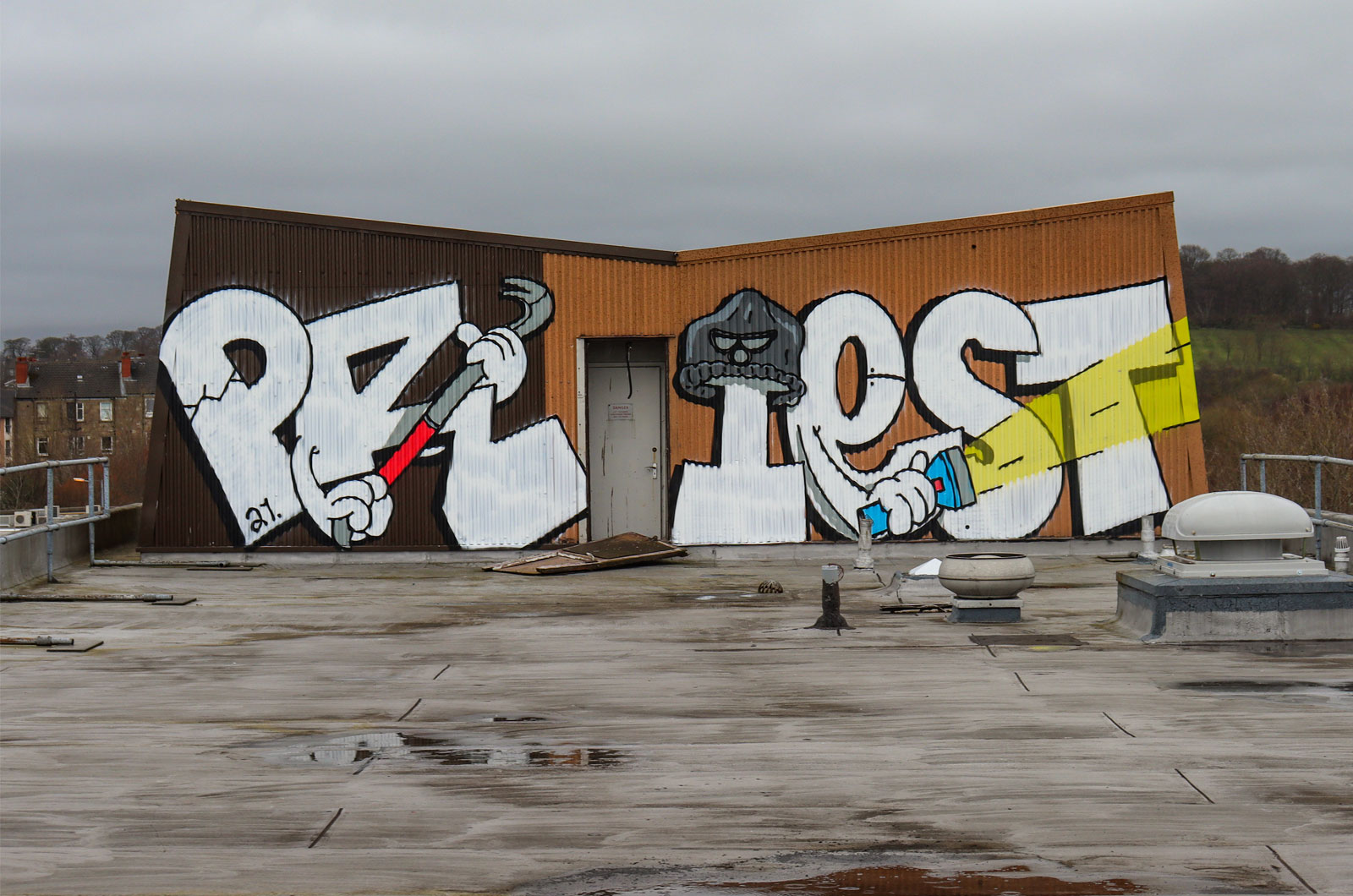 Priest is the anonymous entity behind a series of pieces, or “adverts”, that occupy a unique place in the graffiti landscape. Apart from their bold, colorful and inventive letters, they appear to be produced not by an individual artist or even crew, but a company known as Priestcorp, whose workers occasionally appear in business publicity shots on social media.
Could it be a cynical publicity stunt, a graffiti cult that strips away the importance of the individual, or a public art project that serves to criticise corporate interventions in the public space? We sat down with Priestcorp CEO, known as Priest.

When did it begin? What is your current line of activity?
We launched our first advert on the 5th of July in 2020, This is considered the official start date of the company. Currently we are exhibiting a new print at the launch of Yard life gallery next week. We are based in Glasgow, Scotland! 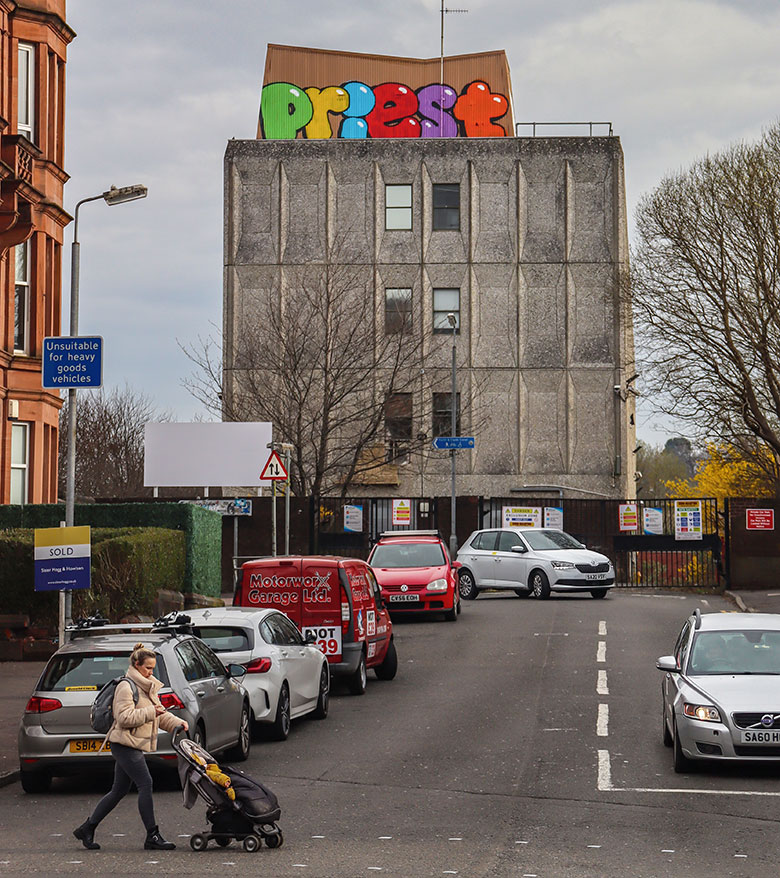 Who makes up the Priestcorp company?
Myself (Priest), I began painting graffiti in New Zealand around 2010, after a few arrests and a small court case I then decided to move to Melbourne in 2014. This was a huge eye-opening experience for me, I began to understand how toy I was and I decided to flee to Copenhagen a few years later. Unfortunately, Copenhagen was the wrong choice entirely and cemented the fact that I was a tiny fish in a shark pool of hot graffiti writers.
I decided to move back to Melbourne and dealt with another exaggerated court case. The next year was spent working on an exhibition with Melbourne based artist Rone who taught me to spend all my time and money on something ridiculous, figure it out along the way and hope it maybe works out. We had just under 30,000 people visit Rone’s exhibition and I learnt that this is how you make art. I then moved to Glasgow in 2019 and worked part-time making sandwiches until I had enough money to start my own company. Priestcorp currently has 53 Interns. 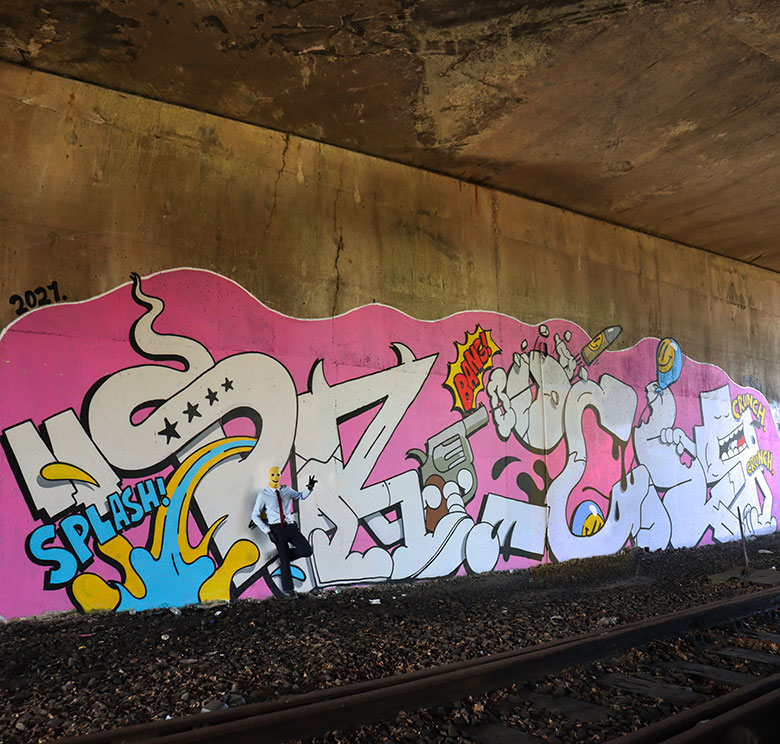 The identities of the team is often hidden on social media posts. How important is anonymity to the progression of Priestcorp?
In a small city with a lot of CCTV, it’s very important. 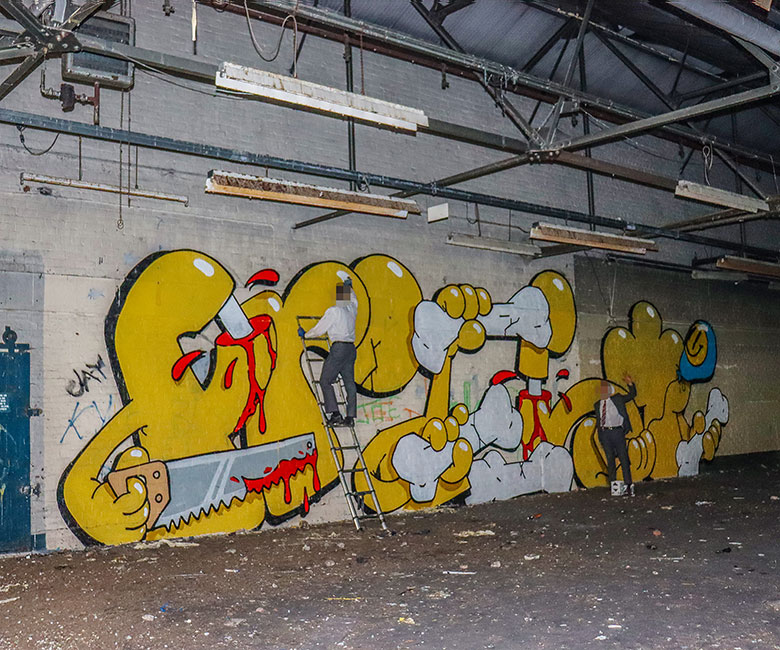 What are the main objectives of Priestcorp?
Our main objectives are explained in the first advert we released in July, it’s on our Instagram page and worth a watch! Priestcorp’s target audience is basically confused street art collectors looking for the next big thing, this was not planned. With our work at the moment we are trying to build an online shop but everything keeps selling out after we release it so it’s not really working out. 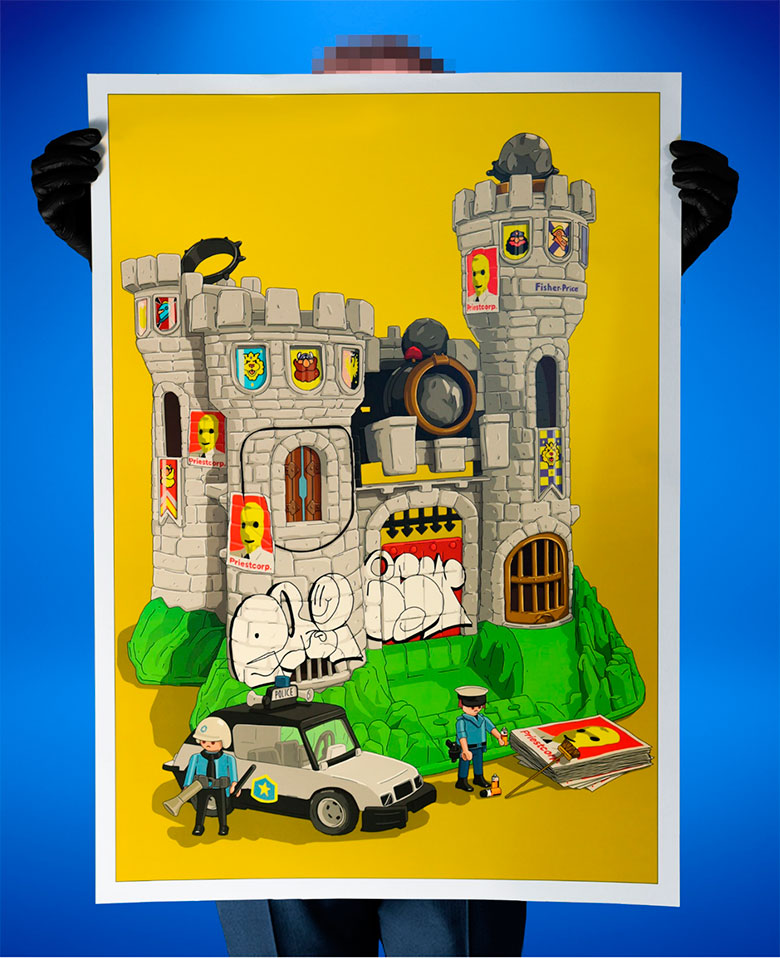 ‘Trash sack camouflage was our first graffiti innovation that we considered functional and ready for the public.’

What are the corporate values of the enterprise?
Next question please. 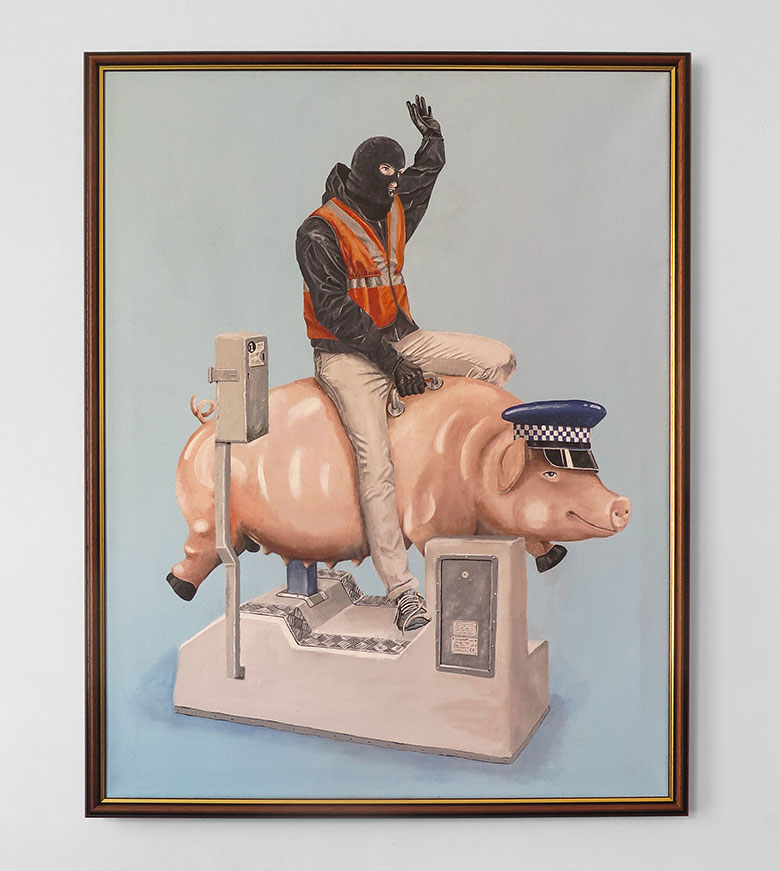 Training is an important part of Priestcorp’s activity. Apart from the well-received Arrow Placement Training, what other courses do you offer? Do you have plans to expand the program?
We offer a service called Sketch 4 you™ which is a paid service in which we sketch your word for you and sell you the piece of printer paper for an extortionate price. We had to suspend the service after we realised how boring the work became. We are aiming to start a new service called Paint 4 Us™ which gives normal people the chance to paint a Priest piece for the low low price of $89.99. 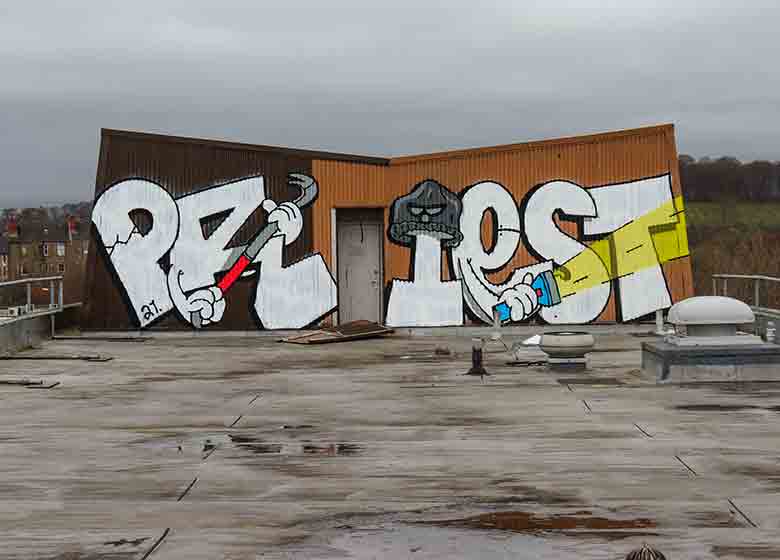 What do you consider the innovations of Priestcorp to be? We saw you published an inventive hack to quickly hide in the street recently.
Most of our innovations are kept secret until they are tested enough to be functional products. Trash sack camouflage was our first graffiti innovation that we considered functional and ready for the public. 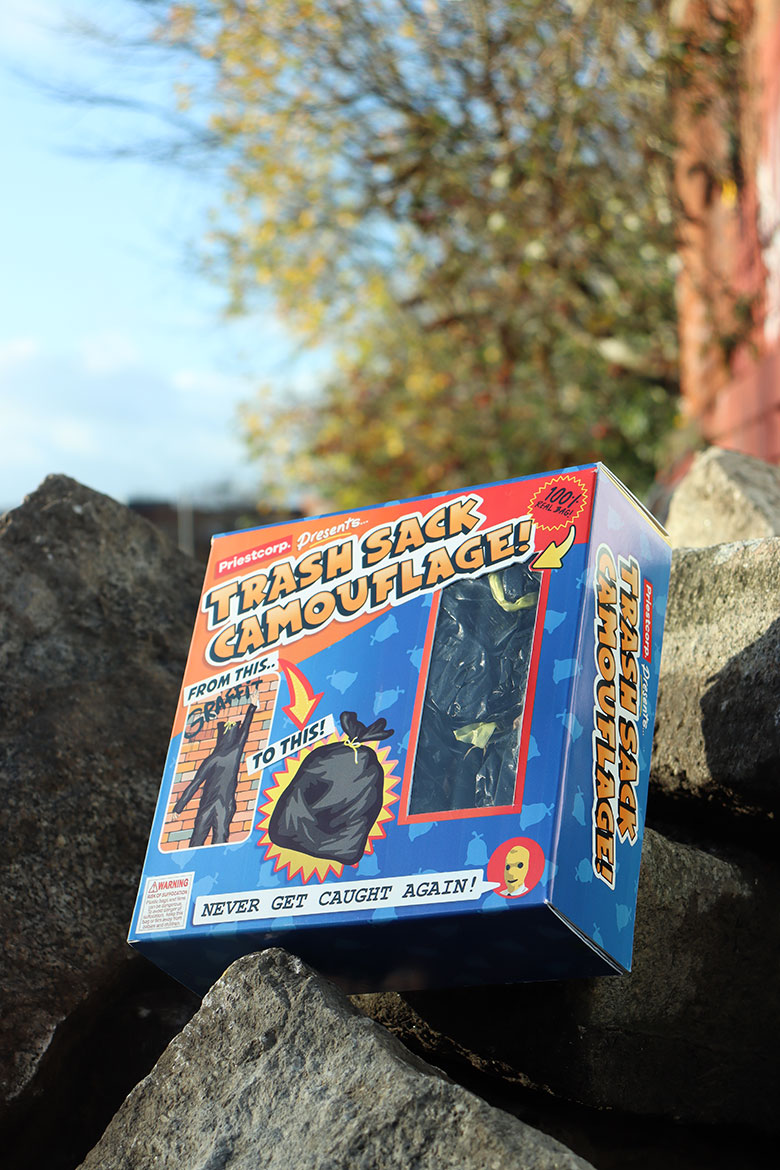 How important is it to be formally dressed when performing Priestcorp tasks in the public sphere?
Very important, it’s much easier to blend in when dressed formally. When has a crime ever been committed in a suit? 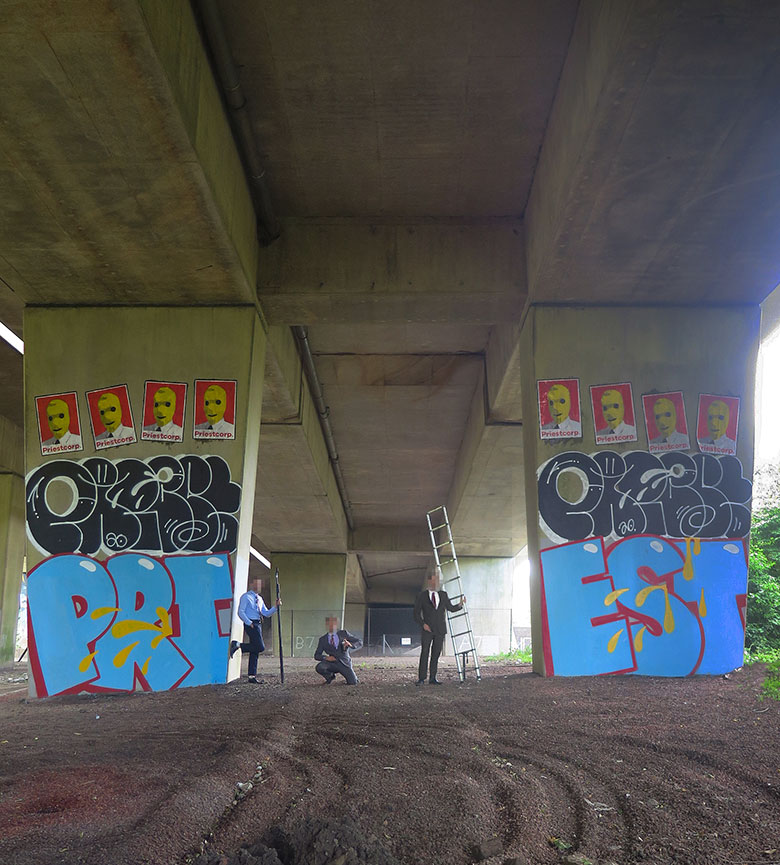 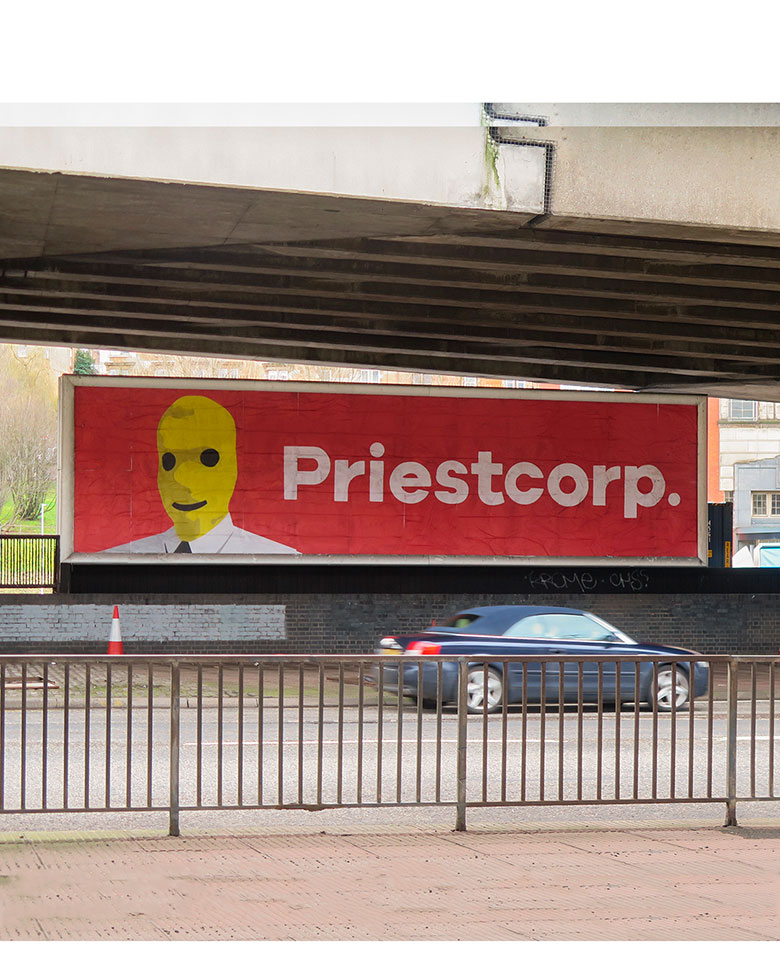 What does the next quarter hold for your organization?
More graffiti, mouse pads, staplers and even a custom spray paint belt to hold your spray cans, those are really cool! We are also currently working on a new body of work with the aim to exhibit. 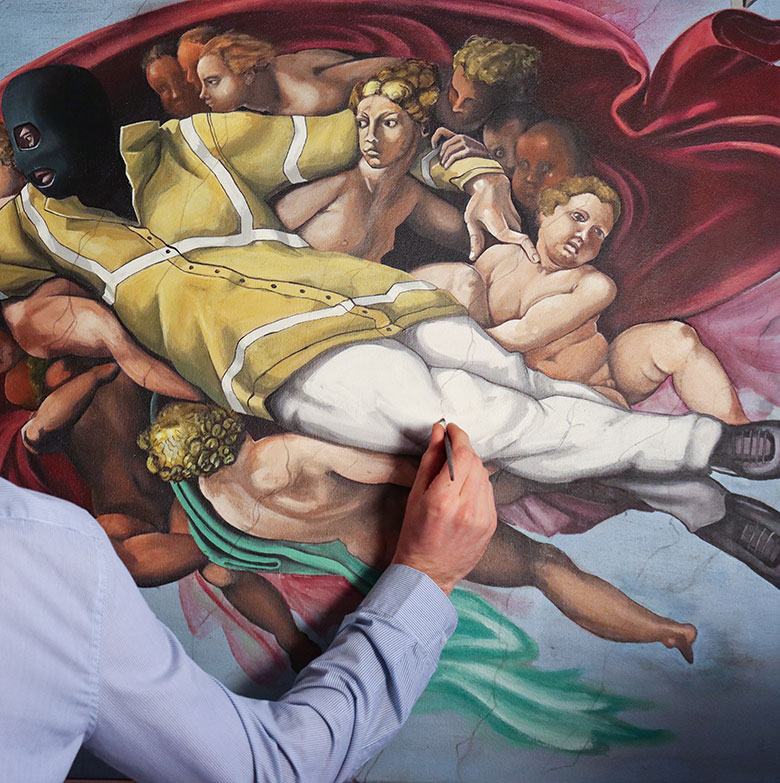 This interview marks the end of #mtnmemesmonth, an attempt to promote and appreciate the humor in graffiti. Search for related content using the hashtag on social media.