BOMBING THE INTERNET WITH DIEGO BERGIA 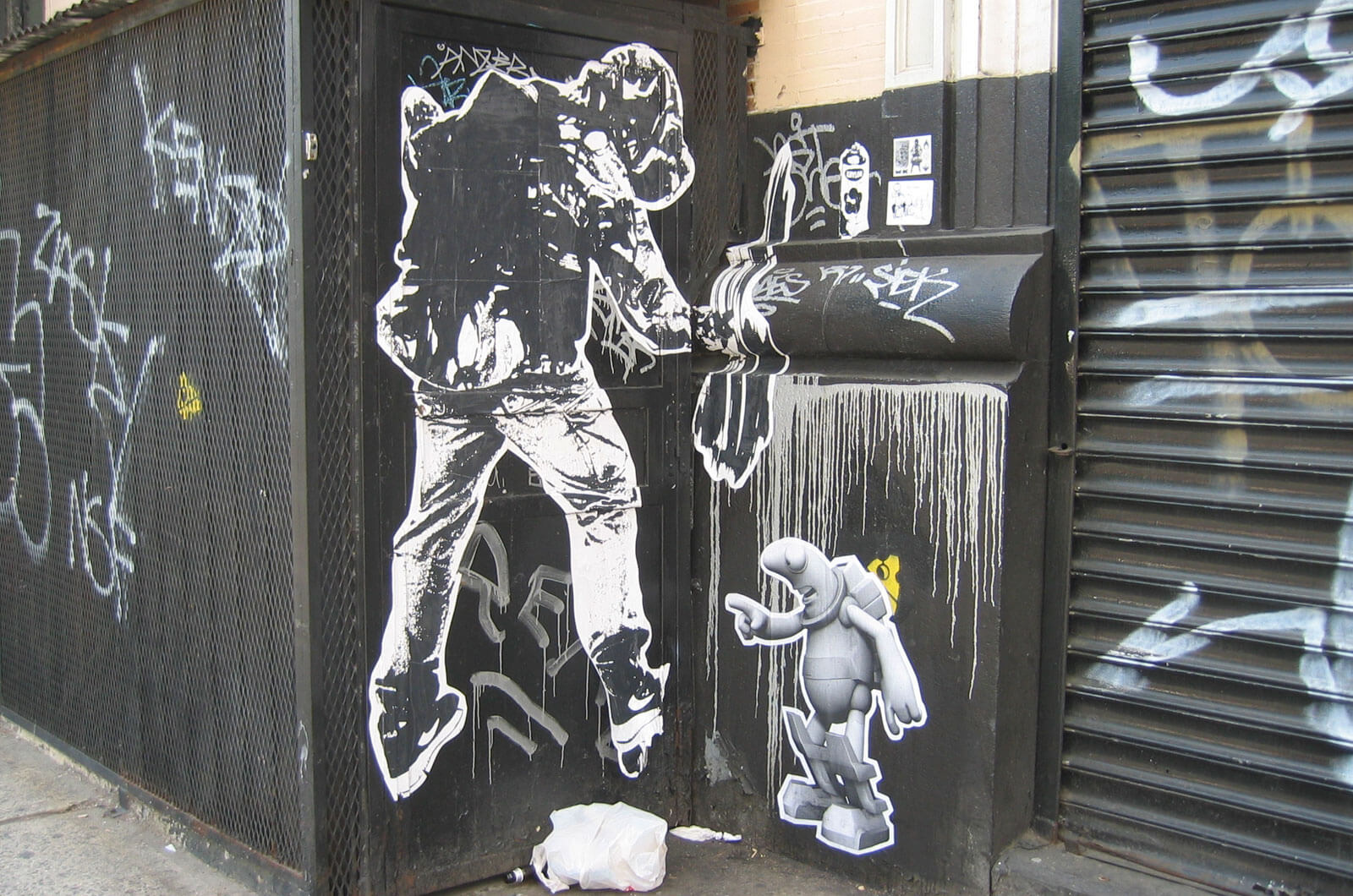 Diego Bergia is one of the world’s prominent digital artists drawing a strong influence from his background in graffiti and street art.
Millions have seen his work in the virtual worlds of titles like Tony Hawk’s Pro Skater 1 + 2 and FIFA 2020, and he’s collaborated with writers like Revok, Ces, Bates and Giant One to produce throwback arcade-style animations. During his extensive career, he has gone from painting freights to producing personalized limited edition NFTs and even minted an animated version of Saber’s infamous LA River burner.
Coinciding with a month of content dedicated to the influence of technology on graffiti art, we thought it was the perfect time to get in touch with the Toronto artist.

It’s a frantic time for Diego Bergia, an animator with a unique skill set whose moves have led to gigs with Marvel, EA and Shazam! To say he is in demand would be an understatement. “Lately I’ve been taking on more than I should, but the projects are cooler,” He reports from his new pad in Toronto. “Honestly my day is like: I wake up at seven, feed my dog, make my coffee and I keep working til my wife gets pissed off, usually around nine o’clock at night.” 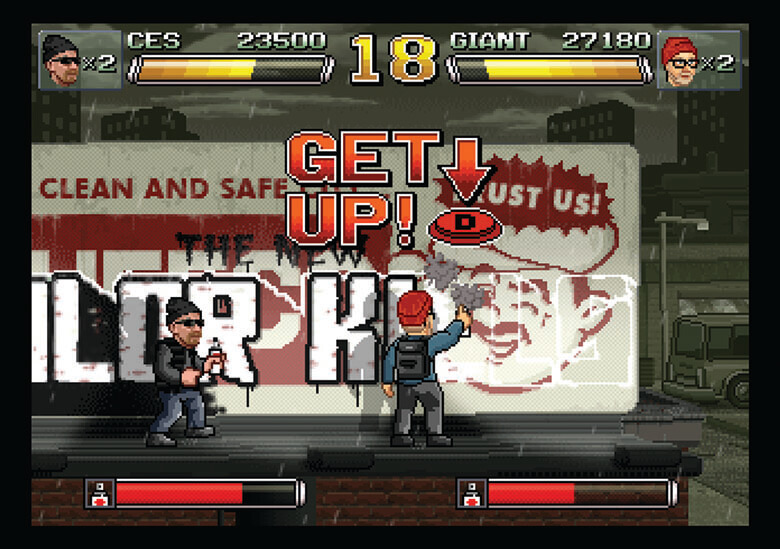 He wasn’t always known as Diego Bergia: illustrator and animator extraordinaire, however. He began writing graffiti in 1993 as a teen, doing hard for a decade before switching media in the early 2000’s, wheat pasting up a charming alien character called Lepos during the street art boom.
He was a dedicated graffiti writer, but it was his pivot into mainstream video games that exposed his art to a worldwide audience. “You think about painting a piece in a city, anyone who walks by sees it, takes a picture of it, puts it online. You can think about freights, how they travel across the continent, and thats another way to get seen. But having graff in a video game is next level.” 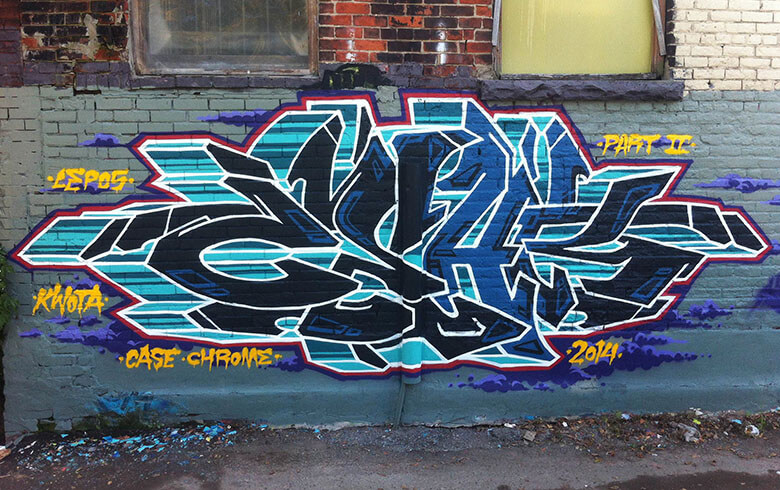 “Now there’s a market for the exact thing that I’m doing. So I started learning about cryptocurrency and NFTs, how to put artwork on a blockchain. And I’m a toy again! Although I’ve just started, people have been doing it for years.”

So anyone that has played the latest versions of Tony Hawk’s Pro Skater 1 + 2 will certainly have seen Diego’s hands and burners on the Venice Beach level of the game, each creation faithful to the style prevalent on West Coast. The attention to detail is incredible: not only in the letter structure and layering of the bombing, but the way the paint seems to have been weathered and worn. He admits he can’t take credit for this final touch, however. “Although I designed the throw-ups and pieces, I handed the layered Photoshop files to the development team who worked on Tony Hawk, and they’re the ones who put it up and layered it. They went fuckin’ crazy! The lighting is so beautiful, they did a good job.” 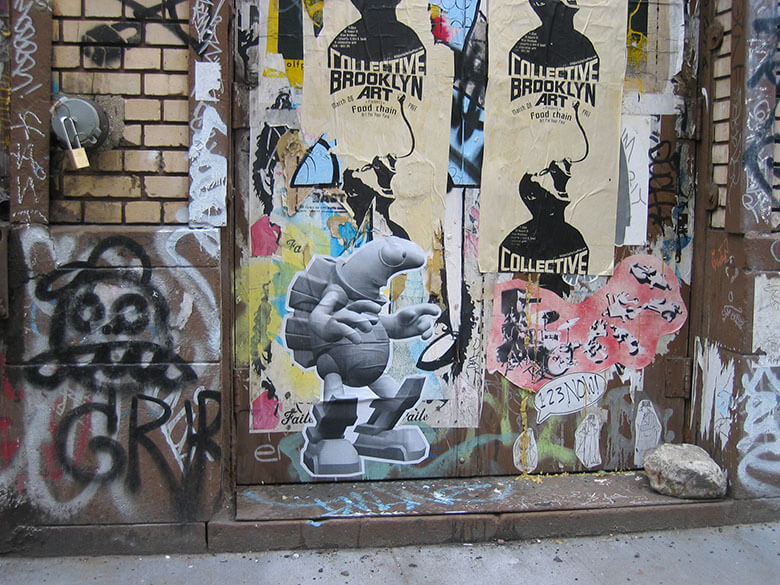 Needless to say, Diego was pleased with the results: “I’m just so lucky to have this virtual gallery of my graffiti in the game.” Like any good video game environment, there are Easter eggs to detect amongst the Lepos pieces and characters. “They gave me a list of all the names of the people working on the game, and I shortened or flipped their name to seem more like a graffiti name. I was totally fine with it because after a while I was running out of ideas!”
Diego came into his own with his representations of street graffiti culture using vintage arcade aesthetics, inspired by a life long love affair with coin operated video games. “I was always an arcade gang guy when I was growing up, going to arcades in the 80’s and early 90’s,” he remembers. “Around my area in Toronto a lot of the doughnut stores and convenience stores had rooms in the back where they would have a couple of arcade games.” You can practically smell the sugar, body odor and smoke emerging from the dark dens of digital entertainment. 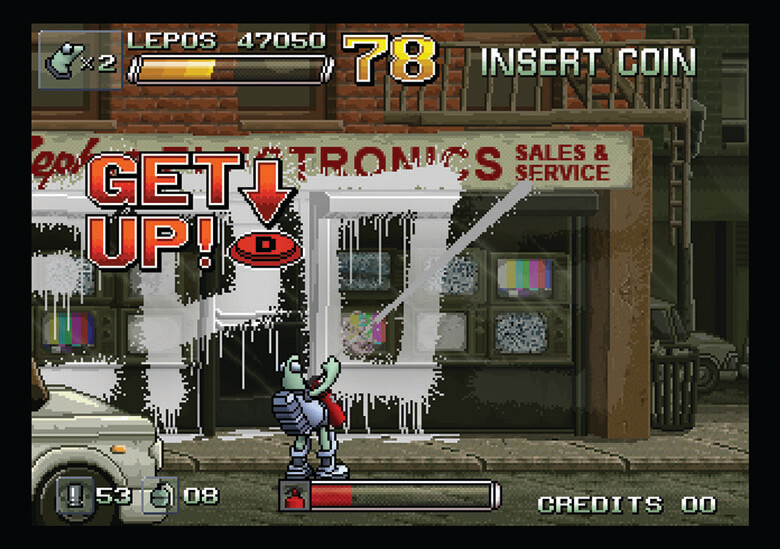 It was this retro appeal that Diego wanted to use in his first animated output, which led to collaborations with some heavyweight graffiti writers. His early work ended up focusing on the Lepos character who would paint the streets in the style of a side-scrolling shoot-em-up game. Revok AWR picked up on one of the animations, posted it on his blog and the two started talking. Soon after, the graffiti grapevine bore its fruit and he was in touch with Ces, Giant One and Bates. “Luckily I just found the guys that I admire the most, and who had the same nostalgic love for games that I do, and they were happy to be a part of it,” he says.

From console games like Mark Ecko’s Getting Up to mobile apps like Vandaleak, programmers have tried their hand at replicating the reality of graffiti art with varying degrees of success. Unfortunately, the animations producted by Diego – as faithful as they are to arcade games – have remained in that state, 16 bit videos referencing the fun and mayhem of a platform shoot-em-up without the possibility of playing. How come? “You’d always dream about making the game a reality,” he explains. “But I learnt quick that you can’t pitch a game to a video game company like you would a movie to a producer. Everything they come up with is internal. So when I tried to reach out to studios, they weren’t having it.” 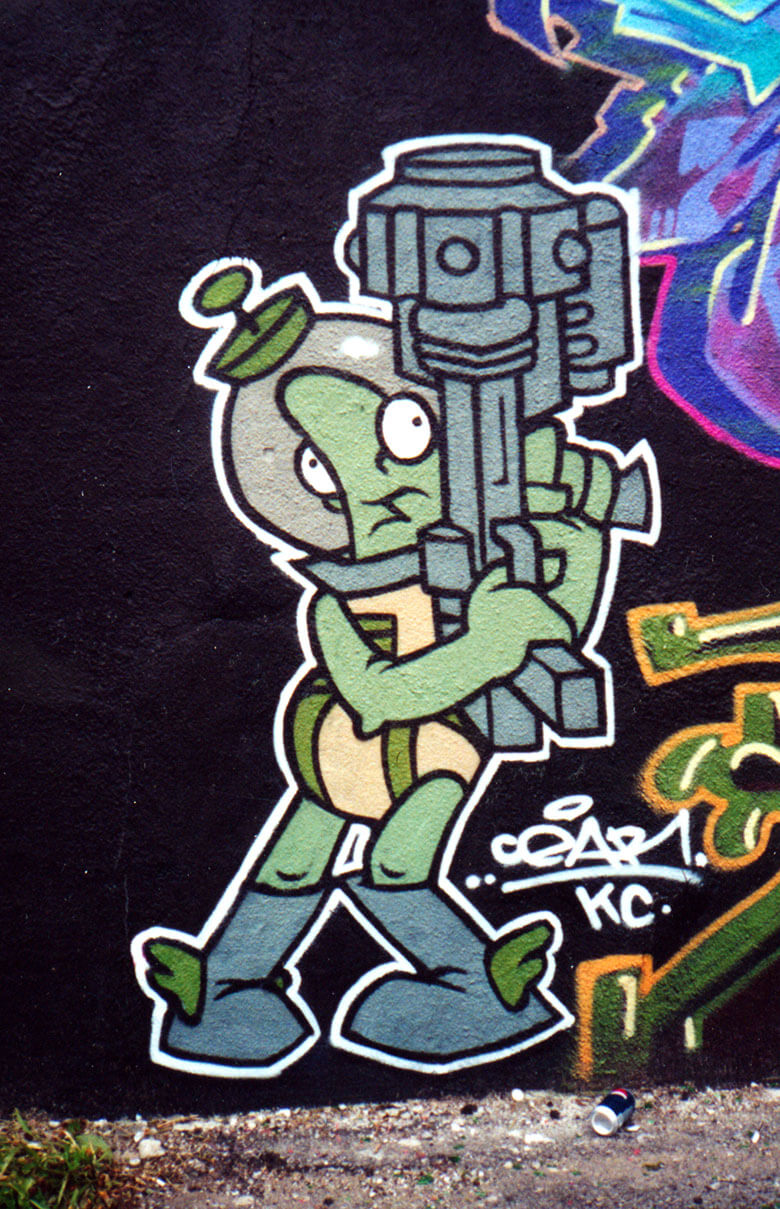 The emergence of NFTs has been perfect for artists like Diego Bergia. “I’ve been doing this for so long for no money,” he says. “Now there’s a market for the exact thing that I’m doing. So I started learning about cryptocurrency and NFTs, how to put artwork on a blockchain. And I’m a toy again! Although I’ve just started, people have been doing it for years.” Finally digital productions are not only recognized as art, but they can be authenticated as original and sold using digital currency.

Diego treated his initial NFTs like original pieces, with a personal touch for his new-found collectors. “I started doing a few one-of-ones, so if you bought a piece, I would do a second one with your name on it,” he says. The first collection was called ‘Cryptobombing’ and featured a looped animation of a character painting throw-ups in between shoot-outs with the police. The initials ‘NFT’ happen to follow the convention of three-letter crew names and lent themselves perfectly to the concept. The personalized piece followed, with the letters that the buyer chose. And just like that, you can find yourself immortalized in an original piece of digital art. 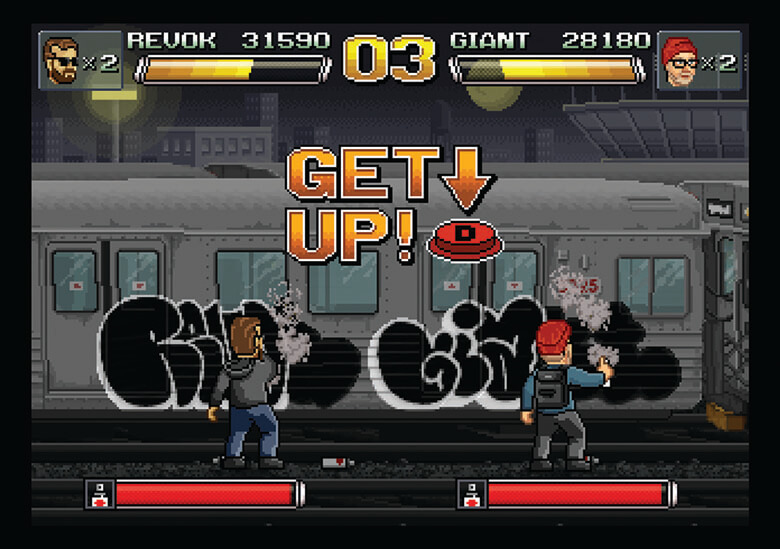 “I miss freights the most. There’s a level of excitement there that you don’t get otherwise. Painting a wall with some friends is a hang, right? But the adrenaline isn’t there. When I would paint trains, it was a mission.”

So how much does it cost to start your NFT collection with a Diego Bergia graffiti animation? He listed his ‘Throwiez’ series for 0.05 ETH (about $200), which you might even consider a sound investment, considering other pieces from his studio have reached prices of 0.83 ETH (nearly $4000). The massive advantage for artists of selling work in this way is that they benefit from the resale market. “That’s some next level shit,” he says. “You set the amount you get from each secondary sale. I set the percentage. If someone wants to sell on my piece for a profit, I wake up with an email telling me I got 10 % of the sale.” 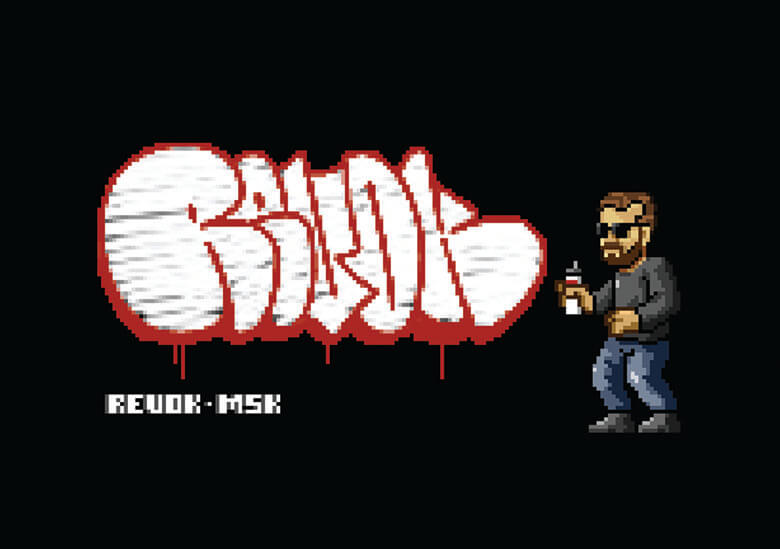 So once you have this piece in your possession, what are you supposed to do with it? As well as producing NFTs, Diego is a collector too. “I’m also purchasing artwork, but right now it’s just on the blockchain,” he explains. “It’s weird, it’s kinda like a new school flex. People that have these really expensive pieces really just show them off online.” That might sound bizarre to a collector of traditional artwork, which doesn’t escape him. “It’s new school. Before we even get into the Metaverses, the Cryptovoxels and the Decentralands and all these new worlds that are online and you can walk around and show artwork, even wear artwork – that’s gonna be be next level shit – then you learn that plots of land in those places are selling for hundreds of thousands of dollars. It’s insane.” 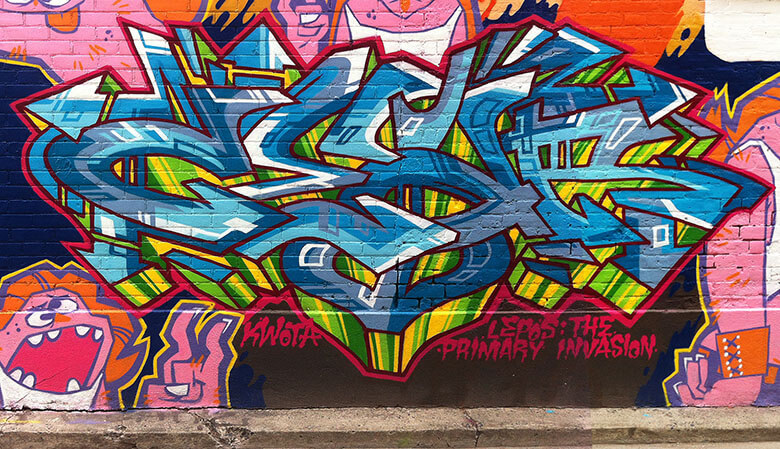 Of course, the urge to go and paint irl never completely leaves a writer, especially for an artist so creative in other disciplines like Diego Bergia. “I miss freights the most,” he says. “There’s a level of excitement there that you don’t get otherwise. Painting a wall with some friends is a hang, right? But the adrenaline isn’t there. When I would paint trains, it was a mission.”
Diego’s career goes to show that when anyone from the creative sector needs to reproduce an authentic urban set design, for their game, movie, series or play, there’s no substitute for a real writer. “Everything I did stays with me now, and I hope it shows that I’ve put in some years. You can tell when someone doesn’t have any style.” 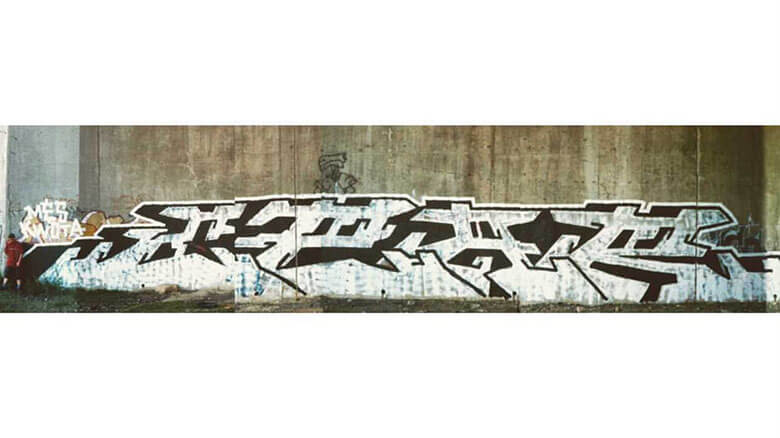 Shop the new collection of Diego’s NFTs right here. Don’t tell us you weren’t warned!
EXCLUSIVE!
Diego has just started a Discord group for writers on the cutting edge of digital graffiti. In his words: “I want real heads in there who are down to communicate and collaborate – peeps that are serious about building the ultimate digital graffiti community.”
Sign up here. 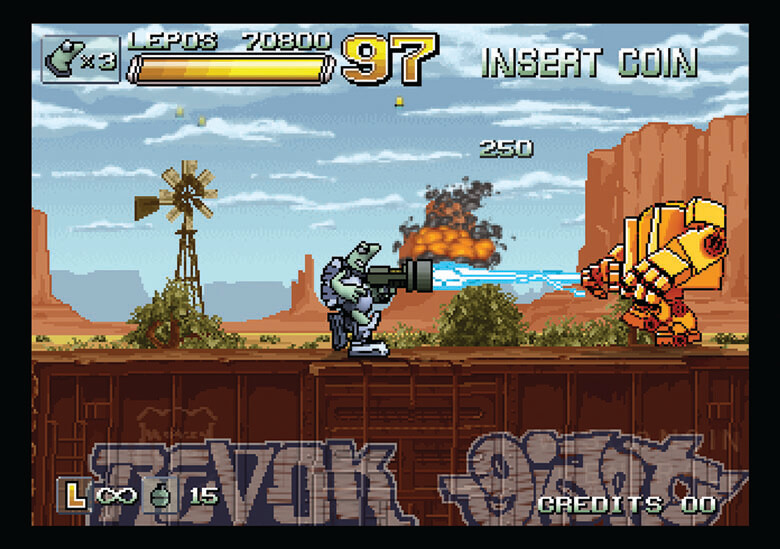