‘MY NAME IS EARL’ INTERVIEW WITH A GRAFFITI SCULPTOR 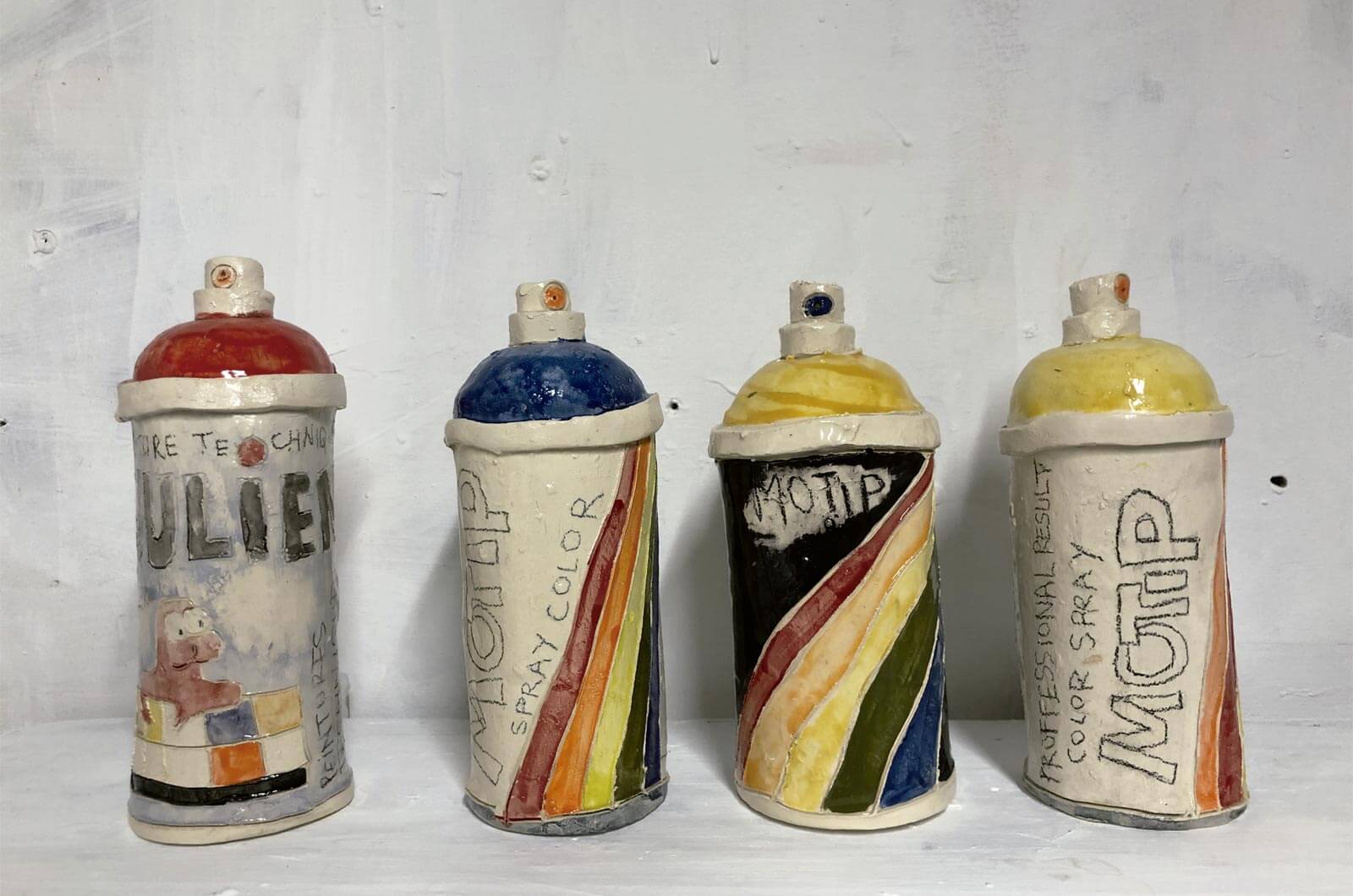 The Parisian graffiti writer and sculptor JC Earl exhibits his outsider clay creations alongside Rorro Berjano in the lastest show at the Montana Gallery Barcelona, entitled “Esmalte & Boue.”
JC Earl, aka Earl VAD, is notorious in graffiti circles as a highly active and influential bomber in Paris and beyond throughout the 1990s and 2000s. Also is  well known is his long-held interest in sculpture, which he has been developing since his childhood and now forms a significant part of his creative output. On the eve of the exhibition in the Montana Gallery Barcelona, we caught up with him to ask him how he connects the two seemingly disparate disciplines.

Can you explain to us where a graffiti artist’s interest in sculpture comes from?
I’ve never really been a graffiti artist. I have always considered myself a writer. I started to write the walls in 1988, but even then I was making small clay sculptures. I started doing both things very young.

Does the difference between these two disciplines also reflect a different attitude?
Not really.
Tags are a scream.
Sculpture is a dialogue.
What changes is the way of communicating, but the goal is the same. 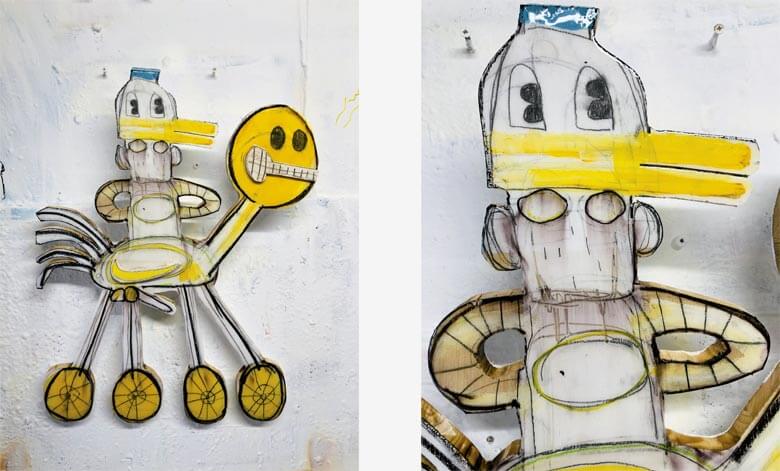 What does sculpture offer that no other type of artistic medium can offer?
In my sculptures I use clay. It is a magical medium. There are so many ways to work it… it has no limits. Without a doubt, it is magical.

What do graffiti and sculpture have in common?
Freedom, a way to communicate my feelings. Therein lies the beauty of gesture. Graffiti, like pottery, requires practice and personal investment. It’s my way of life. You can’t get into it only halfway. 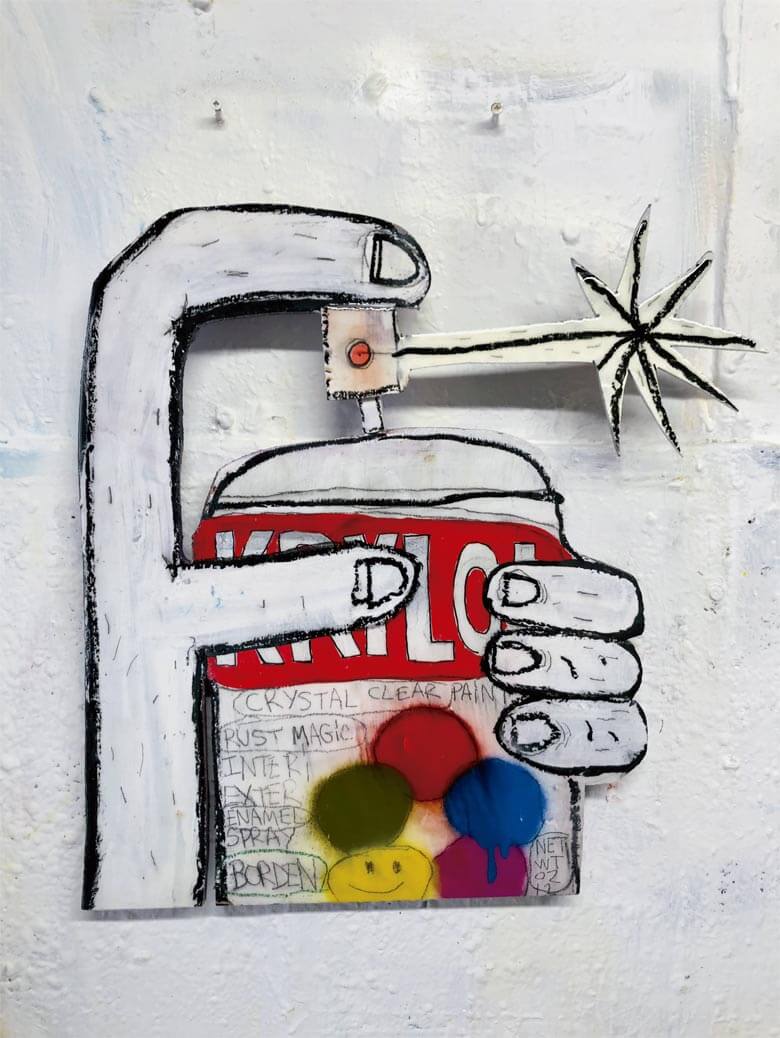 ‘Graffiti, like pottery, requires practice and personal investment. It’s my way of life. You can’t get into it only halfway.’

Can you contextualize the character of Earl VAD in relation to the Parisian scene?
Earl was an energetic young man who in 1992, on Christmas Day, fell on the third rail at the Saint Jacques station on line 6 in Paris. This energetic young man had to fight extremely hard. It is this same force that I still use today in my work and in my life. What does not kill you makes you stronger…

What does the VAD group represent?
The VADs are my second family, there are many talents on the team who each marked the era and continue to mark it in their own way! We are part of the history of Parisian graffiti forever! 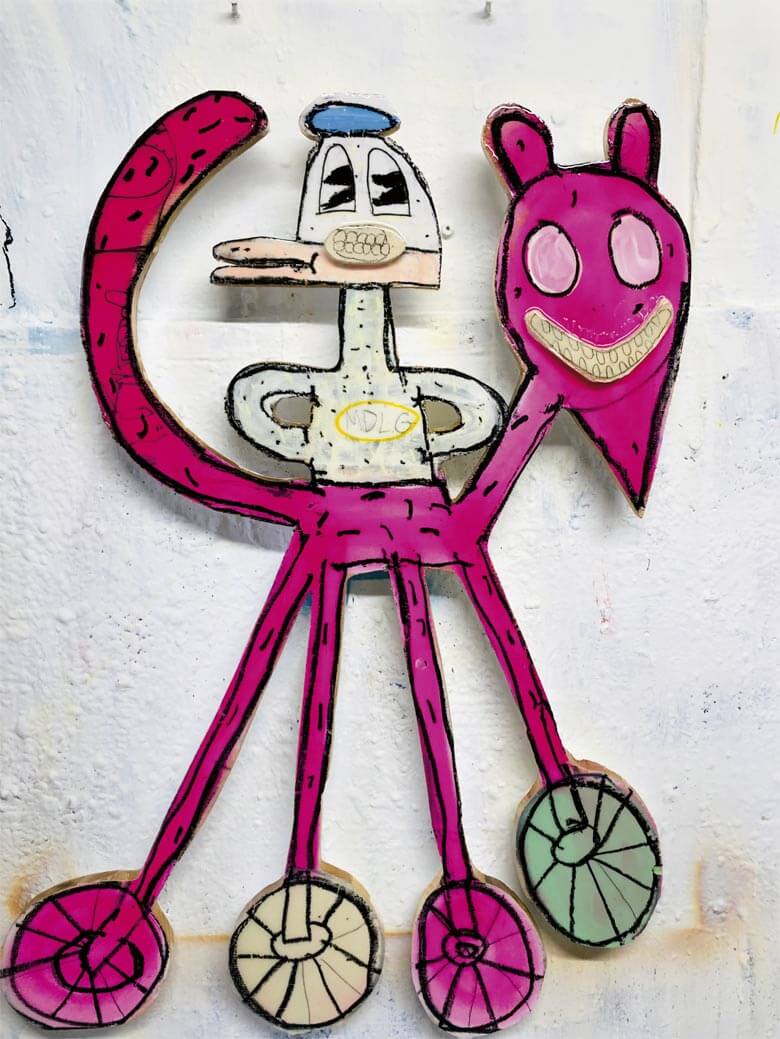 Is there any part of your work that has nothing to do with graffiti?
My work is the result of all my experiences and choices. Graffiti is part of my life and, obviously, it is one of the ingredients of my creation. There is always a drop of graffiti in my work and in my life, like an indelible ink stain at the bottom of your pocket.

What’s behind your style? Is it an introspection of the unconscious? An inspiration of naivety? A joke made for the ideal aesthetic? A tribute to primitivism?
African art that mixes witchcraft, magic and something that I really like: Pop Art and New York graffiti from the 70s. Images that accompany me. Outsider art, the marginal and self-taught creators who have developed their work in solitude and outside the influence of the artistic milieu, seems to be what best defines me. 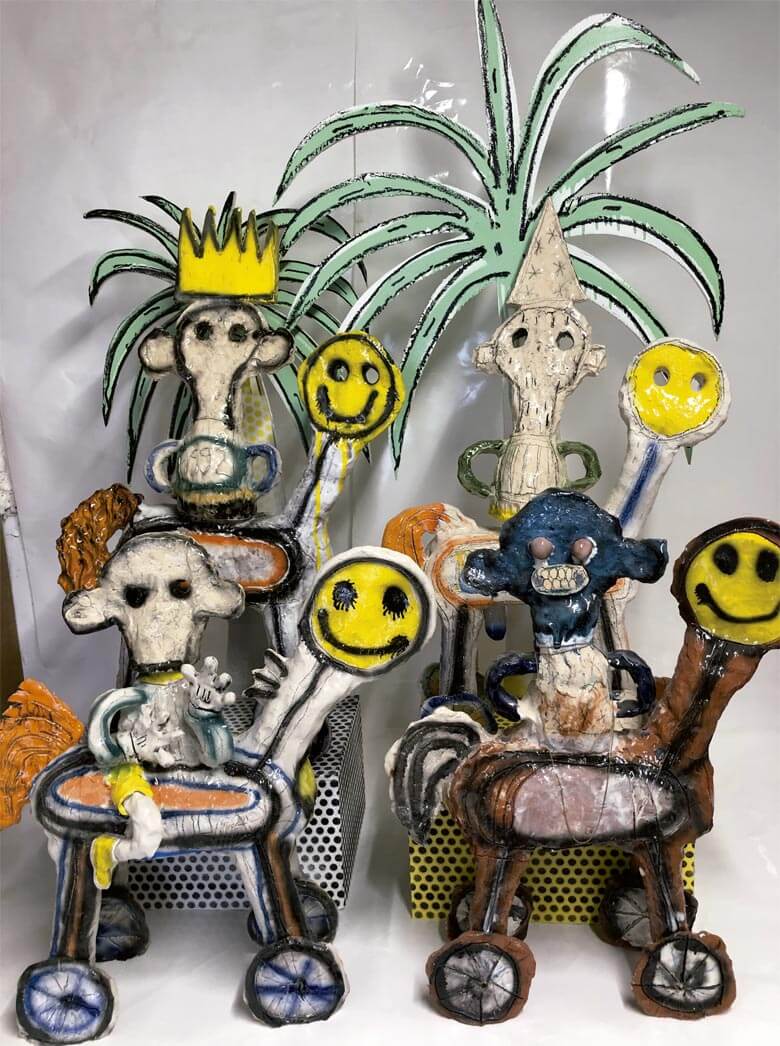 Does violence matter in your work?
Yes, violence is ubiquitous in my work. But I have learned how to do her makeup!

What do you think are the biggest differences between Rorro’s work and yours?
I really like Rorro’s work. I love his rigor and the way he reinterprets things.
We have many themes in common but the way of interpreting them is very different. I can’t wait for our two universes to finally meet at the Montana Gallery Barcelona. 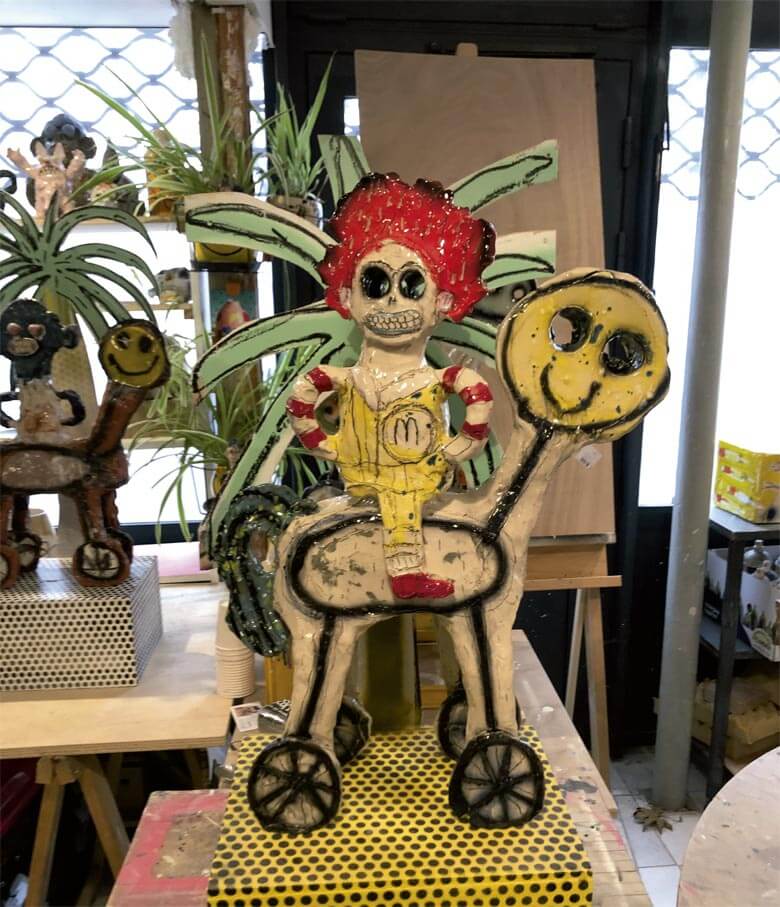 Name one piece of art that made you laugh recently.
Maurizio Cattelan’s $120,000 Banana at the Guggenheim Museum in New York.

Esmalte & Boue opens on Wednesday 12th May and is free to visit until 19th June. 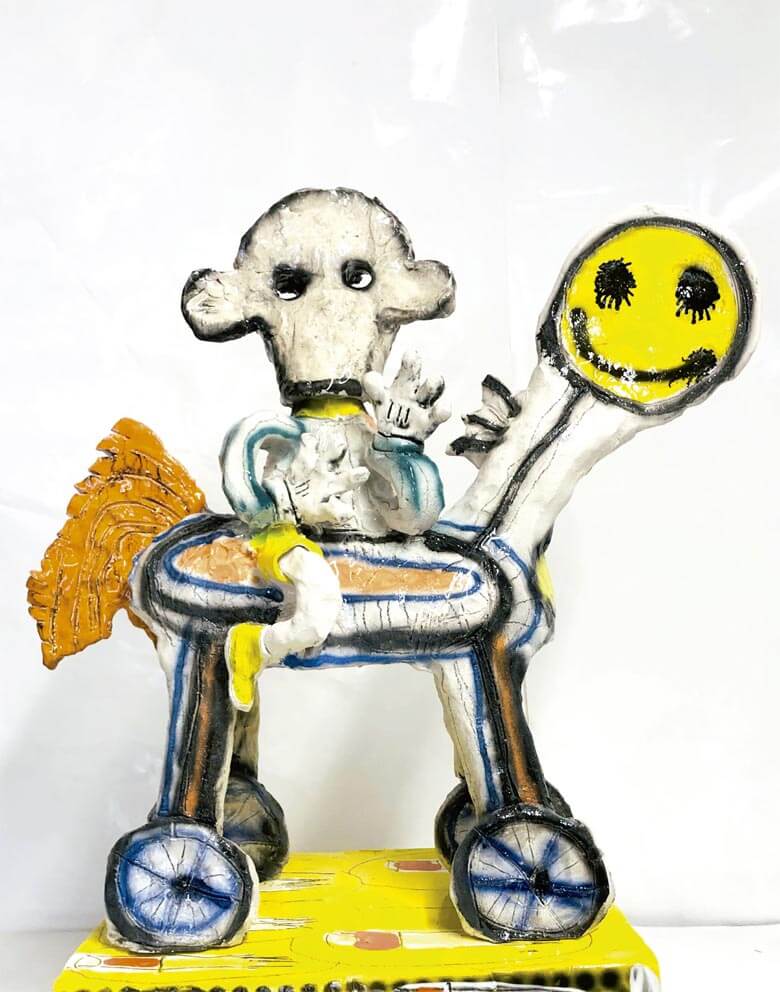 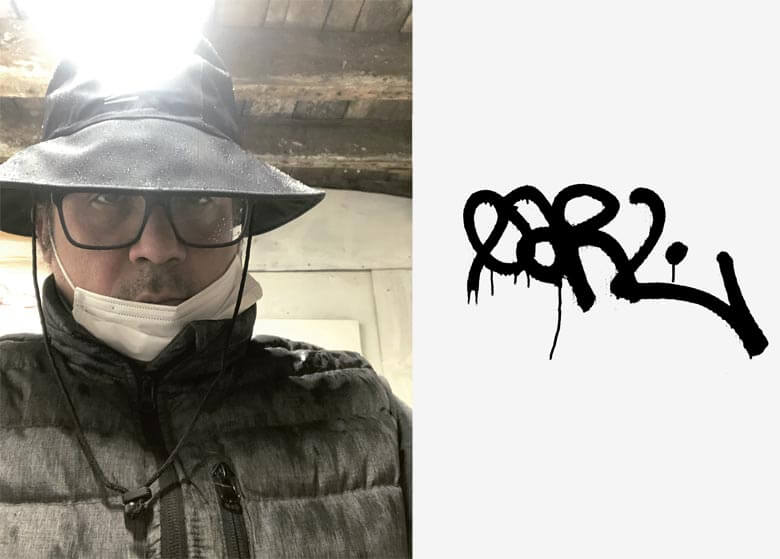