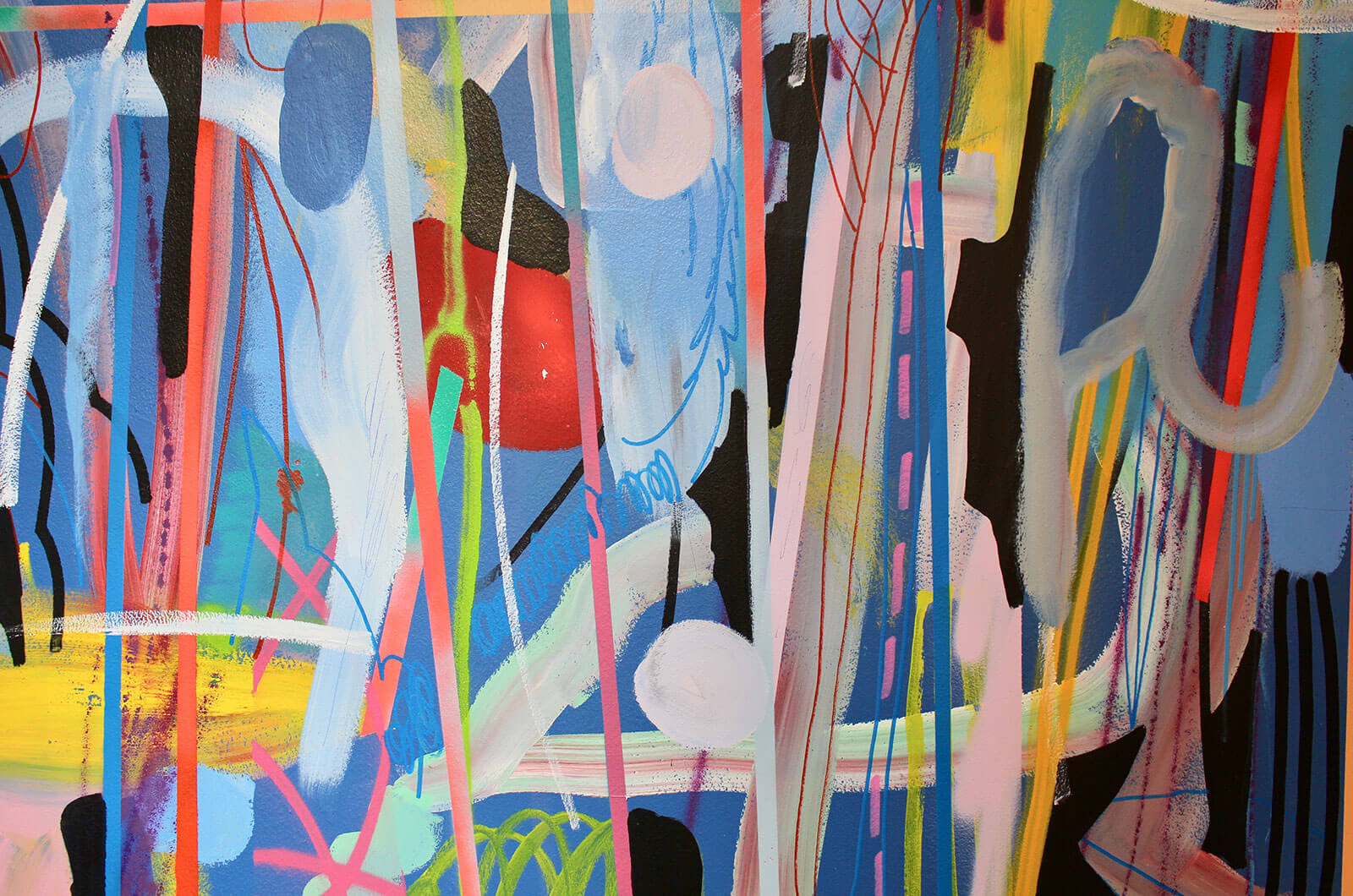 The work of Grems has travelled through some of the most prestigious art institutions in the world, in addition to collaborations with huge brands like Nike, Swatch, Asics, Converse and Scott. His largest solo exhibition to date is currently showing at the Adda Gallery in Paris.

Grems is a French artist whose latest exhibition entitled ‘Traits’ reflects the multidisciplinary nature of his output. As well known as a graffiti artist as he is an emcee and painter, Grems – real name Michaël Eveno – presents his most important exhibition to date at Adda Gallery in Paris, curated by Montana Colors’ Anna Dimitrova.
Now based in Biarritz, Grems returns to his natal city with an uncompromising selection of 40 pieces created especially for the show, including canvases, works on paper and limited editions emblazoned with the shocking colors and instinctive movement associated with this unique artist.
After a well-received inauguración on 20 May, MTN-World caught up with Grems to talk over his years in the game and his insatiable attitude towards production and innovation. 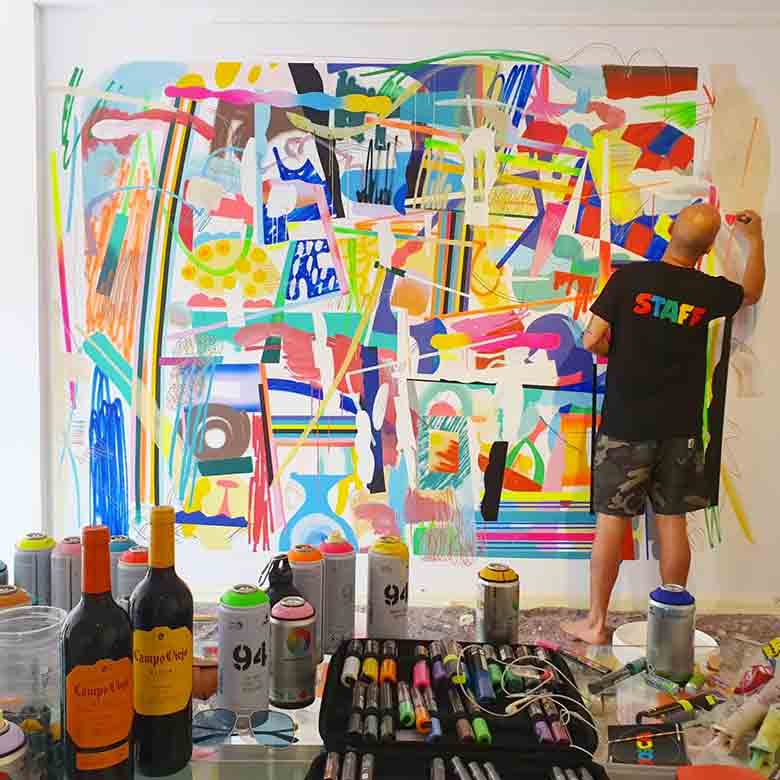 “Traits” is the name of the solo exhibition at Adda Gallery. The multifaceted nature of the pieces are something we’ve come to expect from you. What is the central theme that ties the work together?
Post-graffiti is the link between all paintings. My approach is to reuse the typical graffiti codes such as fillings, outlines, 3D, throw ups, lines or highlights, and to invert them to create a more contemporary result.
Indeed, standardized graffiti has all these features; forms that reassure writers and their flow but the result remains completely identical on each wall.
Unfortunately it reduces graffiti only to technique, so I play with these codes to open endless doors. Is it graffiti? Is it painting? If people ask themselves these questions then I’ve passed the test. 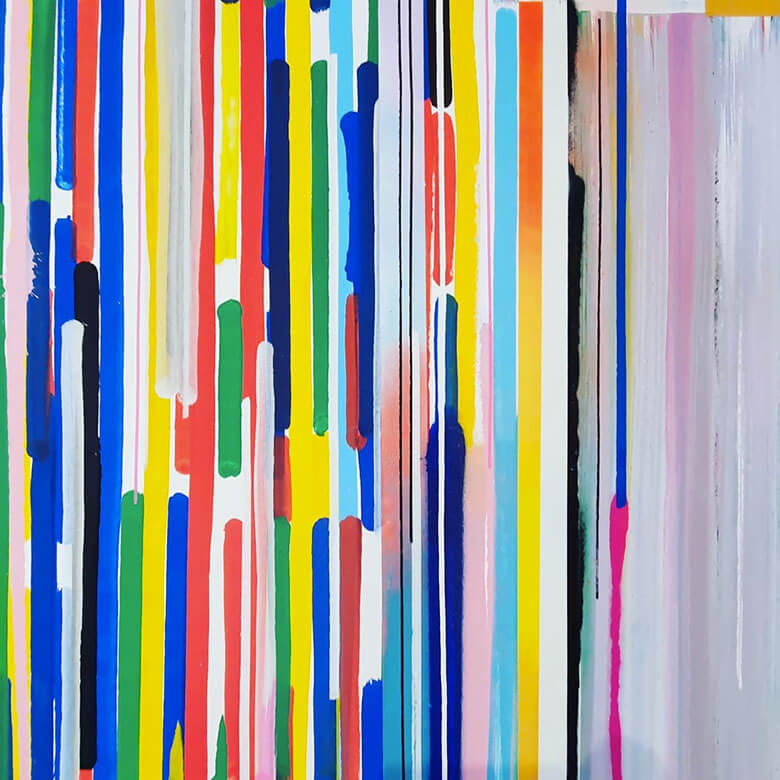 The work varies in size, but the primary colors and raw energy from your graffiti is a constant. What new elements do you consider you’ve included in the exhibition?
There is now meaning to the approach in my work: before there was none. Coming from illustration and graffiti, I had the chance to have a big career as an illustrator with multiple collaborations, but I’m through with it. Meaningless aesthetics no longer interest me. I think this show is a bit of an account of the lane change I made. I no longer wish to be a product but rather an artist.
Can you tell us about the period that the work was produced in?
I locked myself in my studio. I love my studio and I could even sleep there since I love to work so much 🙂  I painted almost every day, pushing myself into deconstruction exercises of the rules of graffiti. It was very cool. 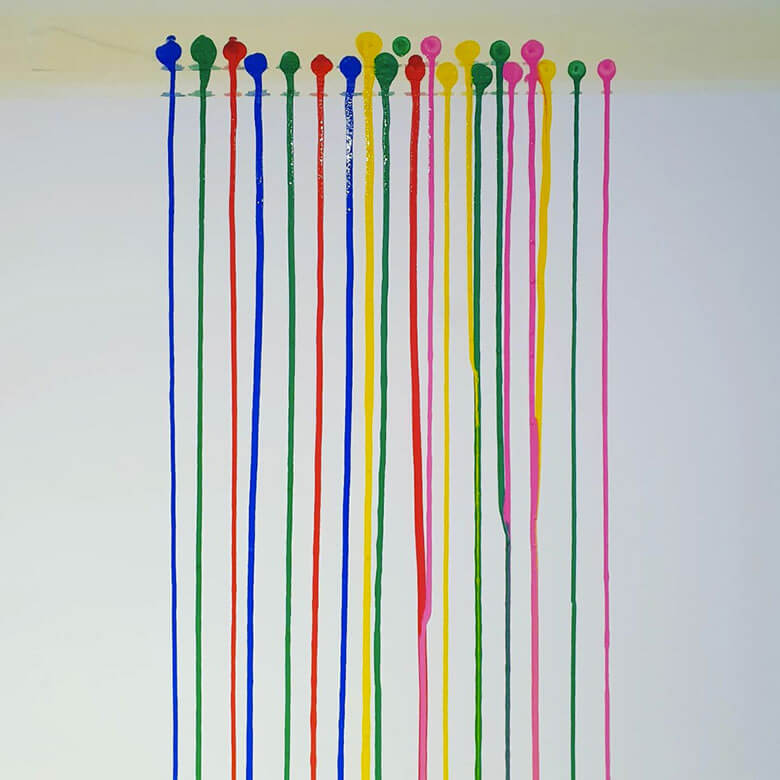 ‘Post-graffiti is the link between all paintings. My approach is to reuse the typical graffiti codes such as fillings, outlines, 3D, throw ups, lines or highlights, and to invert them to create a more contemporary result.’

The first time we’ve seen the term “Post Graffital” was on your website, which goes a long way to describe your work and lots of other emerging artists whose work is hard to define. Can you remember making the transition from graffiti artist to post-graffiti artist? Who were your influences?
I was born in Paris and I studied in Bordeaux. I grew up with tagging and Parisian silvers which drove me crazy!PCP, Lokiss, O’clock…
Then I got to know the raw Bordeaux scene: los SDK and the PME, Sobre, Foe, Pum, Honet who marked the history of Bordeaux for with ultra-modern lettering at the time. Bordeaux was known to be uninhibited when it came to styles. There was alsoXplicit graffix and World Signs magazines which revolutionized codes and established rules.
It was in the early 2000s I think when I first saw the term “post graffiti” in World Signs. I come from the TT crew that I created in 2000 with Rekm, Polka, Scaner, Bobax, Jackusine and Supakitch. It was a group with all kinds of writers: taggers, graffiti artists, poster artists, without any distinction of style. The goal of the murals with lettering without rules, with design, illustrations but above all everything except graffiti.
I was also in another more vandal crew, AQZ, with Tele, Koa and Argo.. I needed my dose of classic silvers and throw ups.
I have also been a fan of abstract painting and design since I was really young.
My TT group was open to all possible media, it was post-graffiti but without being aware of it yet, the research that might be post-graffiti itself 🙂 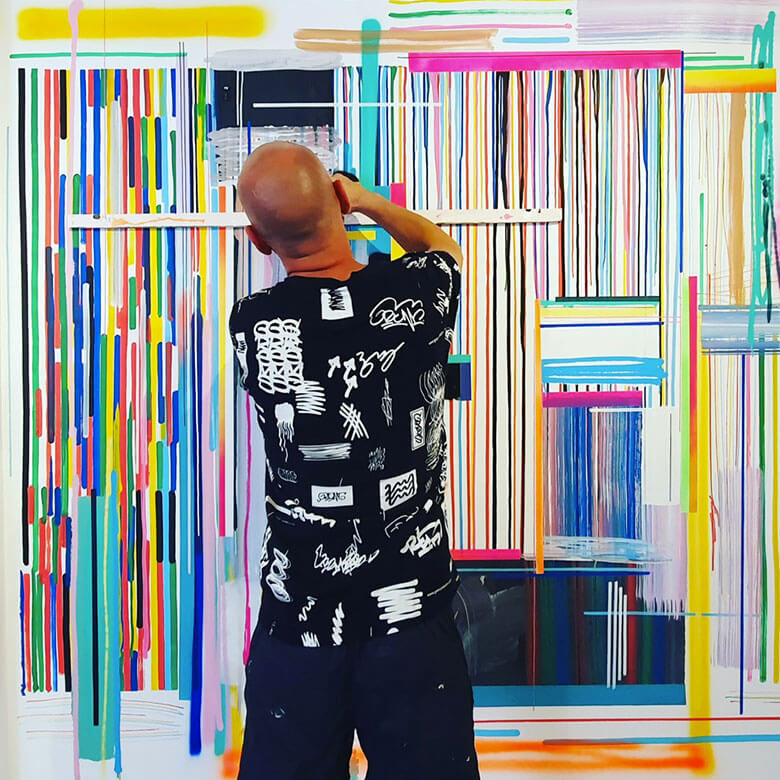 You’re one of the few writers who have carved out a successful career on the mic. Apart from their status as two of the pillars of hip-hop, what do the two disciplines have in common for you?
First of all, I didn’t become plan to become famous, I didn’t go around the world to rap on purpose. I never wanted rap to be a profession. Just a passion. So pure! Like when I do throw ups! These are sacred things!
Rap saved my life and my brain, I don’t want to spoil it or market it. The love that my audience is extremely gratifying and I don’t want to disappoint them. In France, I’m a bit of a crazy character on the rap scene because I am considered a punk : )
Now I understand that I’m a visual artist, that I use several media, including rap, and that I am perhaps just starting to understand what I can artistically get out of it.
I was born 1978, I got to know hip-hop when its disciplines weren’t segmented, so it was normal for us to have two or three hip-hop related activities at the time. It’s just that I never let go of any of them : ) 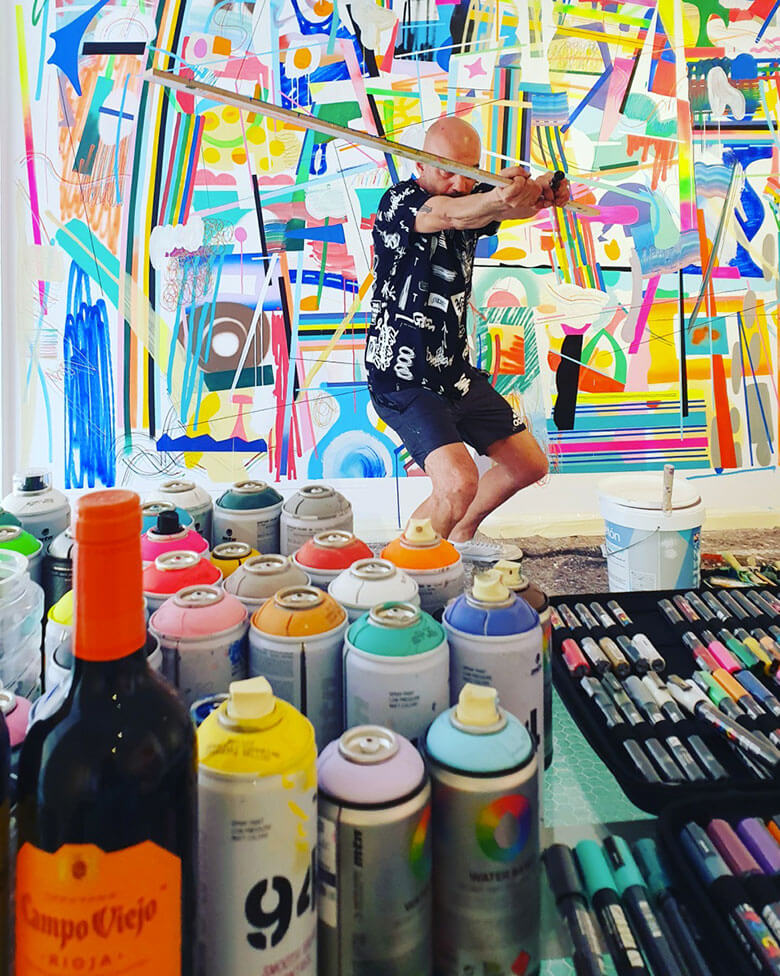 ‘First of all, I didn’t become plan to become famous, I didn’t go around the world to rap on purpose. I never wanted rap to be a profession. Just a passion. So pure! Like when I do throw ups! These are sacred things!’

What music do you listen to whilst you’re creating in the studio? How does it compare with the tracks you listen to when you’re painting in the street?
I listen to house music from Chicago or Detroit, broken beat from UK and New Soul. When I paint outdoors I don’t listen to anything. The music I love is deep and I think that my paintings are too.
After the effort of producing a solo show like Traits, what do you feel like working on next?
On the same principle of exploring post-graffiti. Maybe 3D or shadows for my next solo show. I’ll take the time to do my best. It won’t be before December and probably it will be in Strasbourg : ) 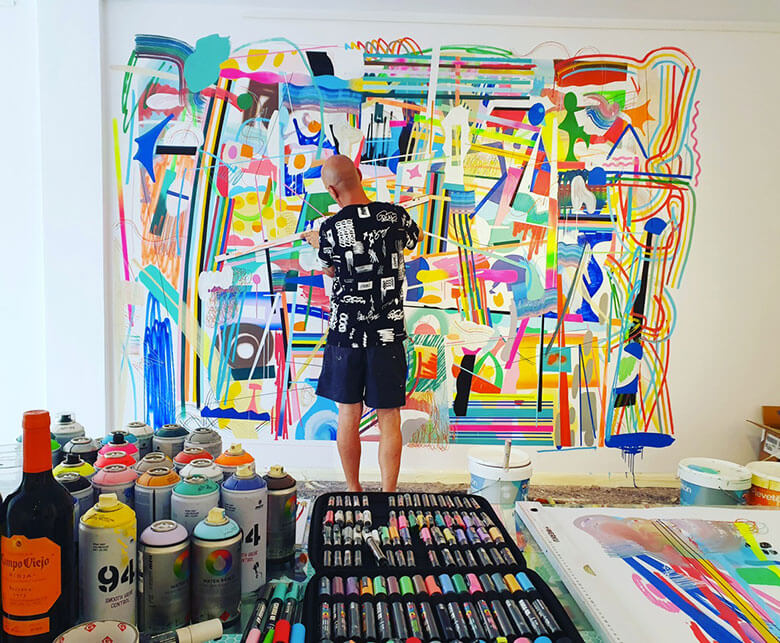 You’ve travelled and shared your work in many countries across the globe, but that activity has obviously been restricted over the last year or so. Once we can start to think about crossing borders again, where are you looking forward to visit?
The day when all borders closed their doors, I was supposed to leave for Ibiza with my wife for holidays. Right now, I’m answering you from a plane to Ibiza with her, to go paint at ADDA : )
It’s great but still I don’t particularly want to travel a lot because my 950 gigs around the world have tired me out so much and I’m scared of flying hahaha.
Thank you very much for these beautiful questions, thanks to Anna for giving me the opportunity to exhibit and thank you to all those who compliment me every day. 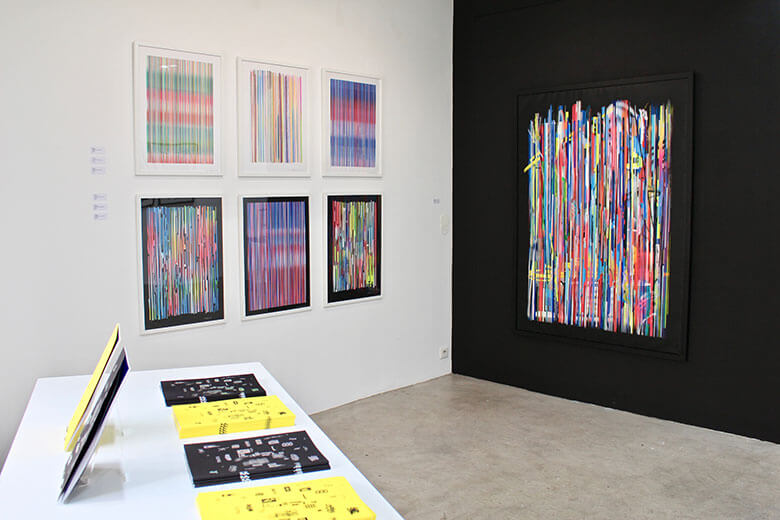 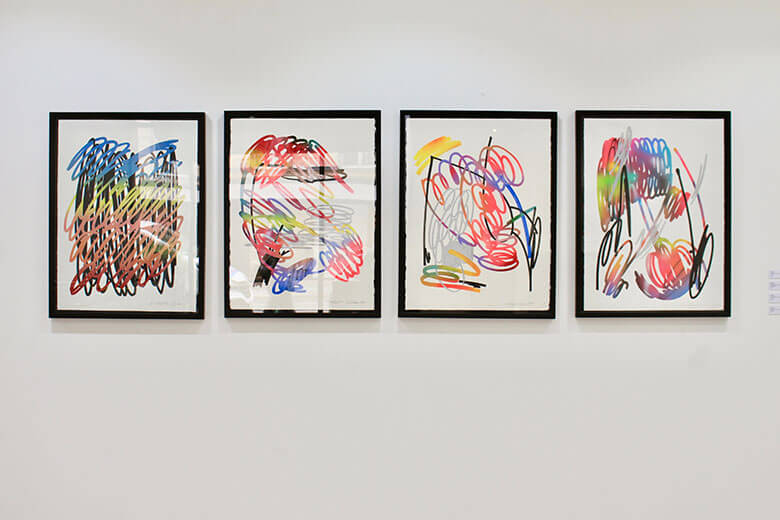 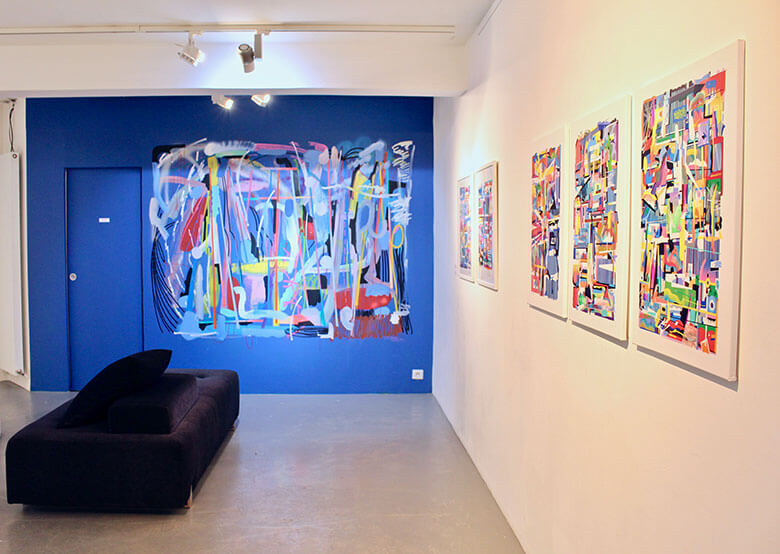 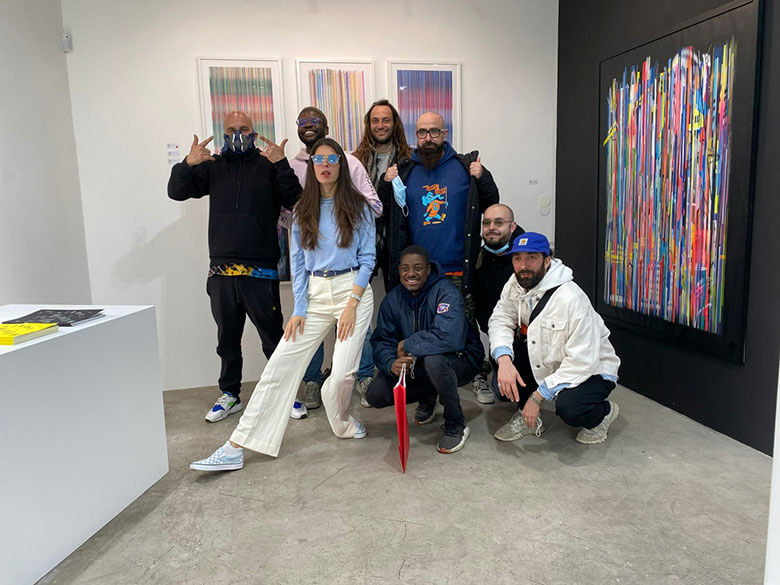