1UP, KATSU AND TSURU ROBOTICS DEMONSTRATE THE IMPACT OF DRONES ON GRAFFITI 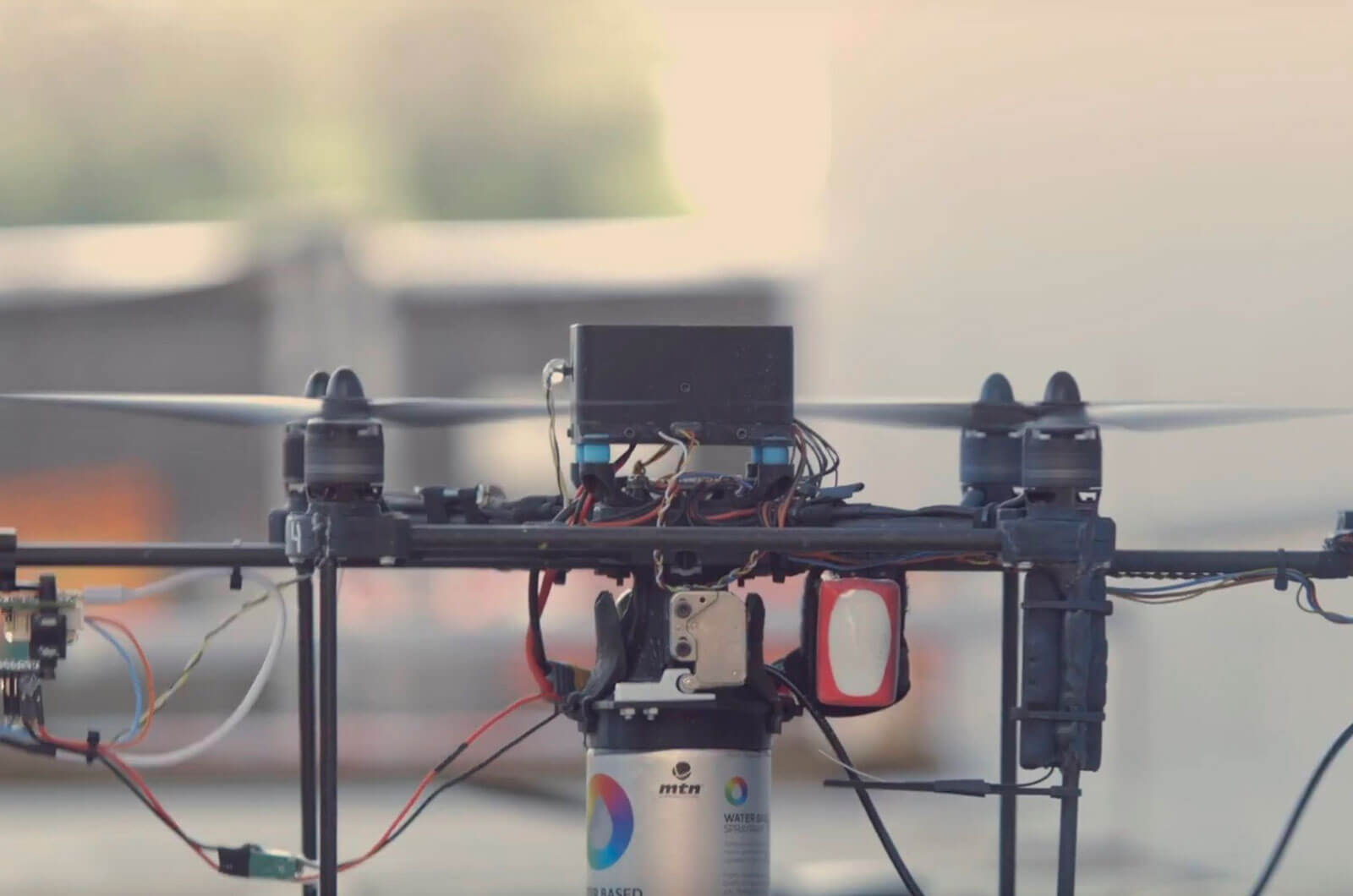 Drones now form a part of our everyday lives, but their application in graffiti is still in its embryonic stages. Thanks to a few pioneers, we can see that their potential is incredible for graffiti – and for catching its authors
“Drones are our favourite toys,” the world-famous German crew 1UP told Noisey when they were interviewed about their incredible Graffiti Olympics video that came out in 2018. For the few of you who haven’t seen it yet, the video is one of the greatest feats of coordinated illegal graffiti in the history of the culture. Roller pieces, heaven spots, fire extinguisher tags, street pieces and even a wholecar were included the eight spots hit by the Berliners. Actions that could appear isolated without the incredible panoramic footage captured by a camera mounted on an unmanned aerial vehicle, also known as a drone.

Like the internet, the invention and development of drone technology was carried out by the military. Initial prototypes of these machines actually existed in the late 1800’s, when incendary balloons were launched by the Austrian army to attack the besieged city of Venice. However, the term ‘drone’ wasn’t used until the 1920’s, when it referred to remote-control flying aircraft built for target practice.
Fast forward to 2006, by which time advances in technology had made it possible to produce a drone that could be mass marketed and affordable to the everyday consumer. Frank Wang, a student at a university in Hong Kong, came up with the idea for the quadcopter design and founded the company DJI, which remains one of the most popular brands to this day.
Technological advances in graffiti have been relatively modest since the early writers adopted aerosols to tag their names, but the introduction of drones into the subculture have made significant steps in documenting graffiti, as we saw with crews like 1UP. Some writers have begun to actually paint using the machines, and logically, security forces have employed them to detect vandals at work.
To date, the most impressive applications of the flying devices is the field of photography. They are incredibly useful to access places where artists could never reach, like elevated angles, tight spaces or highly secured areas, like train yards. Damagers are another German outfit who have published some of the most impressive videos on their Instagram account, the recent collaboration with Mr Paradox Paradise demonstrating the dynamic capabilities of the medium.
Of course, the intentions need not be illegal for drones to enhance the possibilities of appreciating artwork. Chop ‘Em Down Films are an international collective who have documented street art in all its incarnations, including footage of the Okuda intervention produced for the Fallas festival in Valencia in 2018.

When it comes to creating chaos with technology, it’s clear that there is one name on the cutting edge: Katsu BTM. From his mobile app to his collaboration with Off White, the New York native is at the forefront of investigating the ramifications of robots on writing. So logically, he was amongst the first to give a drone the power to paint. Back in 2014, he demonstrated the device in Wired magazine, admitting: “I do have this little videogame-inspired fantasy of lying in my bed, sending my drones out my bedroom window, having them render my tags all over the city and then flying back home to me, like, in my bed.” A year later, he grabbed headlines again, taking on a huge advert featuring Kendal Jenner on a busy street in the Big Apple. “It turned out surprisingly well,” he said at the time.

The results were more impressive in terms of the gesture rather than the marks that he left on the Calvin Klein poster. But Katsu wasn’t deterred, and continued to share his work via a dedicated channel that he launched in 2019: Katsuru. Although updates have been scarce of late, the artist has demonstrated that the output possible with the help of drones will only improve year on year.
Over the Atlantic, a group of Italians were also making advances in the field of drone graffiti. In 2017 Tsuru Robotics shared footage of their initial findings, and in 2019 they carried out a mural in Turin. Titled the “Urban Flying Opera”, the piece consisted of four drones working in unison to reproduce a selection of 1200 crowdsourced doodles on a large-scale surface in multiple colors over 12 hours: probably the most technically accomplished artwork recorded to date.

Of course, the drone technology is as much interest to the artists and documentarians as it is to the authorities opposed to unauthorized aerosol art. In 2013, the German railway company DB announced it was testing drones to spot train writers hitting steel, with infrared cameras capable of identifying anyone careless enough to paint with their face exposed. It’s not clear whether they were put on everyday patrol, but more recent reports from Holland and France suggest that the tactic is an effective one for their respective rail companies.

It’s fair to say that photography and video have benefitted most from the nascent years of drone technology in the graffiti scene, with fantastic footage appearing on a regular basis on social media. Yet producing anything more than rudimentary pieces seems beyond the reach of the few pioneers who have posted their work, and development in the field seems to have been put on temporary hiatus. In better news for the writers, it will be a while before autonomous Flash Gordon style robots are peering over their shoulders to curtail their creativity.

Wanna read up more about the development of graffiti tools since it took its modern form? Check out this report about an exhibition in Hong Kong detailing precisely that topic.