“EVERY DAY IS HALLOWEEN” | LAUREN YS ON ANALOG ART, PEOPLE’S PRONOUNS AND PISSING OFF THE PROUD BOYS 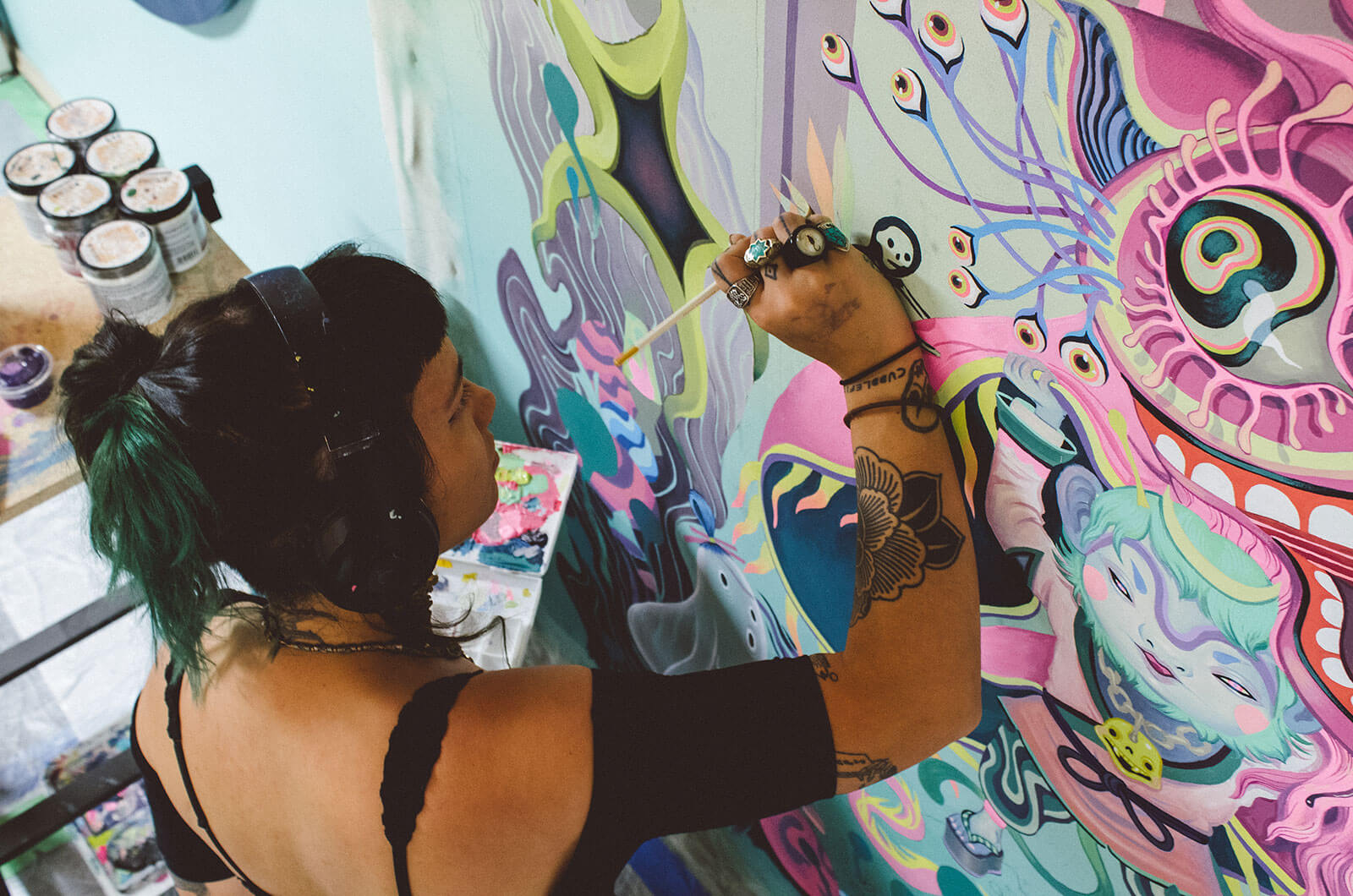 The fantastic figures of Lauren YS are not only excellently executed but produced to protest against bigotry and racism
Lauren YS is a Los Angeles resident whose murals and studio work is strongly informed by gender politics, the world of fantasy and their Asian-American heritage. Initially drawing influence from strong female artists like Miss Van and Faith 47, Lauren is now a world-renowned profile in their own right.
As the perfect way to round off a month of coverage of fantasy graffiti, MTN World got in touch with Lauren to find out what was behind their unique perspective and approach to graffiti art.

Can you tell us a little about how you arrived to be the Lauren YS that we know and appreciate in late 2021?
I have simply always wanted to tell stories. I grew between Honolulu and in a little town in Colorado (literally “Littleton”) and spent my time with my sketchbook, traveling with my family (parents were pilots/flight attendants), daydreaming, and getting into trouble.
I moved to the West Coast for school and fell in love with lowbrow art, street art, animation, the desert and the wealth and diversity of Asian food in California. After school, I started out hoping to write graphic novels or make animations but quickly got swept up in the world of painting — something about the movement of it all, the freedom, the scale.
Growing up I was pretty quiet and would never let anyone watch me draw, lived very much in my own head, but I think I’ve always been (for lack of better verbiage) angry, gay, and obsessive. Turns out these things make good fodder for the energy needed to make murals, when added to a lot of hard work.
I started painting with the intention to sort of bring fantasy, escapism, color, and femme rage into the world, but didn’t realize until the past few years just how necessary and powerful the political can be in the world of street art, and have since then tried to double down on my efforts to pack more education, dissent, representation, and advocacy into my work.
The stories I want to tell about imagined worlds is now less about the fantastical, mythical, or escapist, and more about who we are, what is just and what we can achieve here and now. 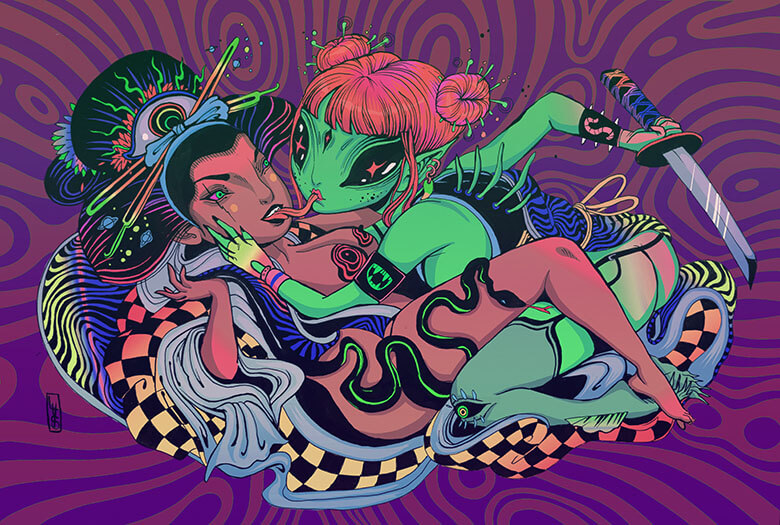 ‘I sincerely hope art – or any creative endeavor – will never become fully digital. Art will never be able to remove itself from the artist’s hand, and it shouldn’t.’

Some of our readers might not understand the need to check and respect people’s pronouns. How can you break it down for people who haven’t thought much about the subject?
Respecting pronouns is a powerful practice because it communicates an understanding of personhood beyond optics, and also breaks down barriers created by language that have structured ideologies I believe we as a people need desperately to extract ourselves from.
Respecting someone’s pronouns is a small gesture of faith that an individual is who they say they are regardless of how we may be conditioned to “read” them. It’s not meant to be like, a source of irritation, or something designed to get angry about – it’s an invitation via the doorway of language to imagine the infinite forms that gender can take, and to reposition that personhood within the hands of the individual rather than the onlooker.
It’s similar to someone changing their name: if they say that’s their name, then that’s their name, and it would be disrespectful and obsolete not to call them by it. It gives agency back to one’s interior rather than a strangers’ codification. It can be a powerful act of care that can create a sense of safety, selfhood, and understanding in spaces that can otherwise feel alienating.
I’d also love to see really antiquated words like “ma’am,” “miss,” “sir” being used less often. It also paves the pathways for others who will undeniably come along our paths, and slowly these threads of respect will leak beneath the surface of language to yield a more intersectional understanding of who we are as people beyond the trappings within which gendered thinking has for so long programmed our minds. 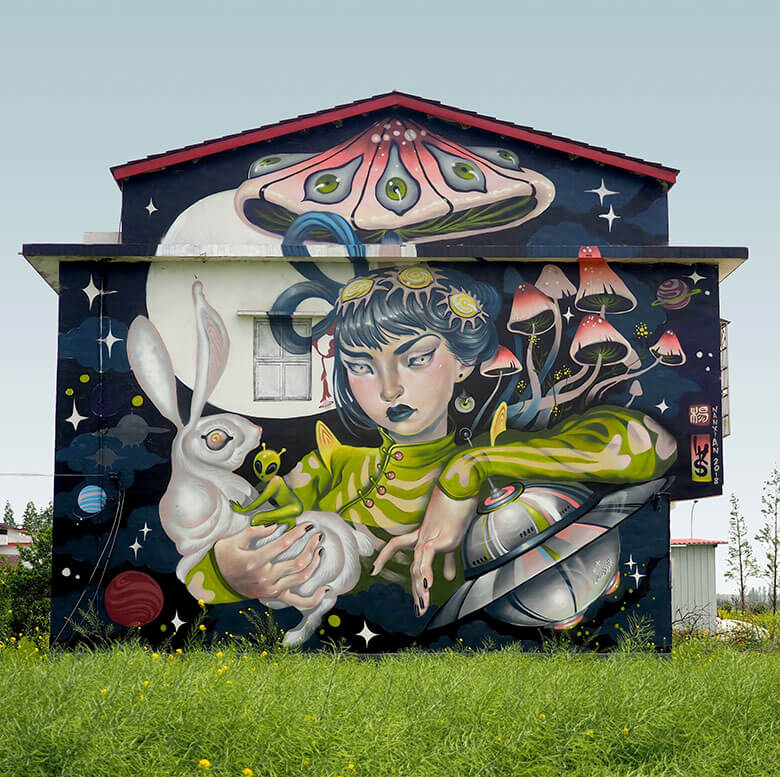 You are an artist, muralist and illustrator. Is there any outlet that you prefer to the others?
Painting murals will always be the icing and the cake. I think most muralists probably feel that way. Working large scale is just a lot more fun, physical, present, challenging, and dynamic, and mixed with the possibility for travel, the elements, and community experiences, it’s pretty impossible to beat.
However (and I learned this the hard way) you can’t really hope to progress as an artist just by painting murals; and the quiet, meticulous explorative work done in the studio is just as precious. They are all symbiotic. The core of my work will always be in illustration – just concept work executed with black and white, which is very intuitive and fun – and in past years I have been working on becoming more comfortable with fine art and painting.
Color doesn’t come as intuitively to me, and to be honest I would prefer to work out color schemes in spray paint than with a brush (more fun, quicker) but I think it’s really important to spend time experimenting in the studio without any kind of outside pressure in order to challenge yourself. 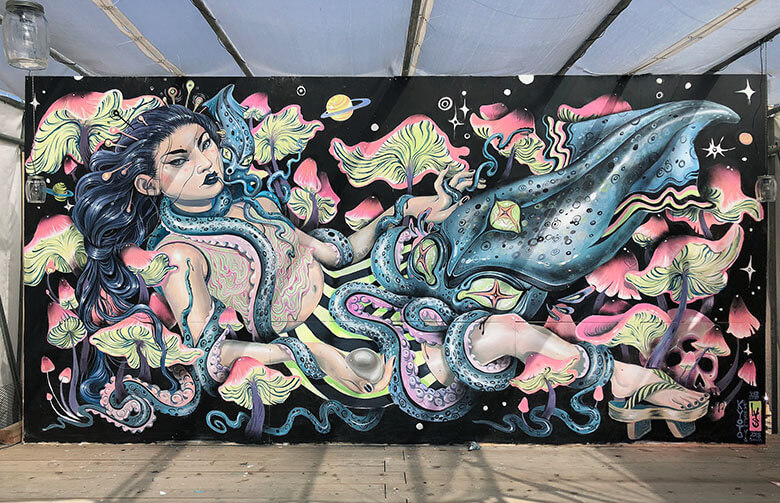 We’ve learnt about your work through Instagram and this interview is being carried out over email. Is art completely virtual now? Or is there a need to nurture local scenes?
I sincerely hope art – or any creative endeavor – will never become fully digital. Art will never be able to remove itself from the artist’s hand, and it shouldn’t. Expediency should never outweigh quality or authenticity. It’s similar to the way I feel about animation: yes, CGI/3D is easier, faster, and cheaper, but it will never have the same power or feeling as stop-motion.
No matter how far technology evolves, it will never be able to replicate the character and subtleties of an artist’s presence — especially with murals — the problem-solving techniques made on the spot, the infusion of personal experience, the managing of special obstacles, the reflection of color and energy from one’s surroundings.
Technology is powerful only insofar as humans are able to implement it; but art is a practice of the heart, and it will always require a human touch at the core to retain its integrity. And yes, to the need to nurture local scenes!
Street art is so heavily woven into the social fabric of a community, there must always be attention paid to the way space is shared with artists, art lovers and proprietors who interact with those spaces on a daily basis. Art has so much power to build community; what happens over the internet should also never overpower what happens eye to eye, neighborhood to neighborhood, street to street. 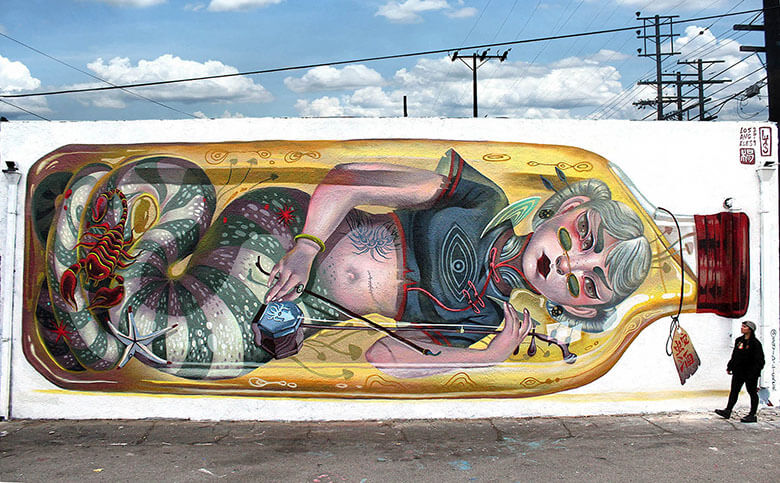 ‘When I started painting murals it was really uncommon to hear discussions about gender or queerness in these circles, and the fact that I’ve found myself caught in some deep conversations with people I wouldn’t really imagine doing that with before means a lot, and hope that everyone is discussing these things more often.’

What input have you had from the graffiti and street art scene over the years?
I grew up really idolizing painters like AIKO, Faith47, and Swoon, artists whose work and attitudes were femme-heavy, punchy, outspoken, socially conscious, and unafraid. I’m also a huge fan of writers/painters like the ETAM cru, ARYZ, Smithe, Alexis Diaz, DEIH, The Weird Crew (out of Vienna/Germany), Gaia, Miss Van, Okuda. Also currently really looking up to some amazing painters like Emily Ding, Sickid, and Bakpak Durden. 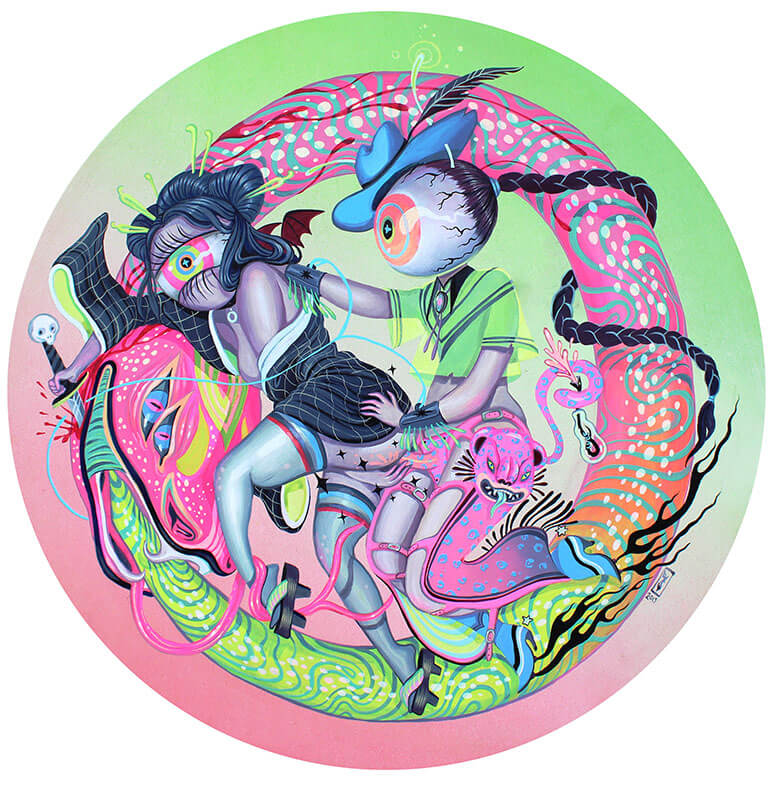 You use your artwork and, more explicitly, your social media to support social causes like BLM, Stop Asian Hate and justice for indigenous peoples. How can you quantify the impact of your work?
Weirdly, via the amount of hate I receive — generally if I make a point or an argument that provokes vitriol and I start getting responses from Proud Boys, anti-vaxxers, white supremacists, racists, or bigots, then I know something effective is happening. Not that the goal is to just go around being divisive just for the hell of it – but I think that contention is a powerful sign that what you’re talking about is resonant and deserves a conversation.
I also have paid attention to the amount of in-person discussion and feedback that has opened up in response to some of my social justice work, which has been really interesting, especially within the mural art world. When I started painting murals it was really uncommon to hear discussions about gender or queerness in these circles, and the fact that I’ve found myself caught in some deep conversations with people I wouldn’t really imagine doing that with before means a lot, and hope that everyone is discussing these things more often. 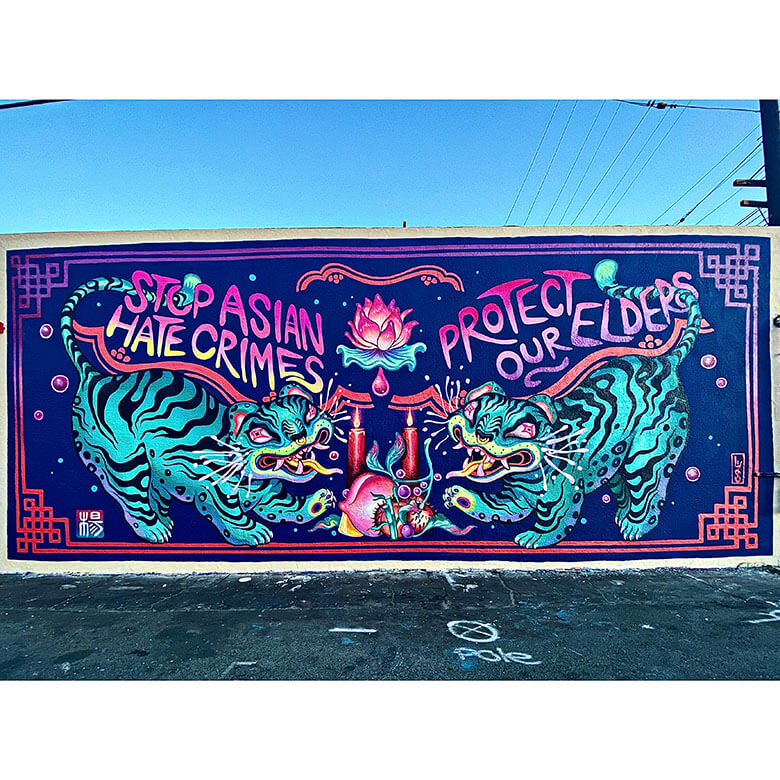 We heard you used to play hockey. Is there anything you miss about the game? How do you stay in shape these days?
When I say I used to play hockey, I don’t mean I was particularly good at it. It was a necessary practice for anger management during high school – unfortunately, in the “girl’s league” we weren’t allowed to check each other, so I spent a lot of time in the penalty box, and eventually quit. Also, it’s a really expensive sport.
But I still love everything about hockey – I mean it’s a sport where you literally get to wear blades on your feet – anyway, nowadays I struggle to keep a consistent workout regimen but we did convert a space in our home into a mini-gym where my roommates and I have done a kind of cross-fit inspired workout.
Deep in the pandemic, we were fond of doing rotating stations and one of the stations would be karaoke, so for example you’d be doing push-ups for 30 seconds, sit-ups for 30 seconds, then rotate into the karaoke and have to sing the next 30 seconds of “Baby One More Time.” It was really good for morale. 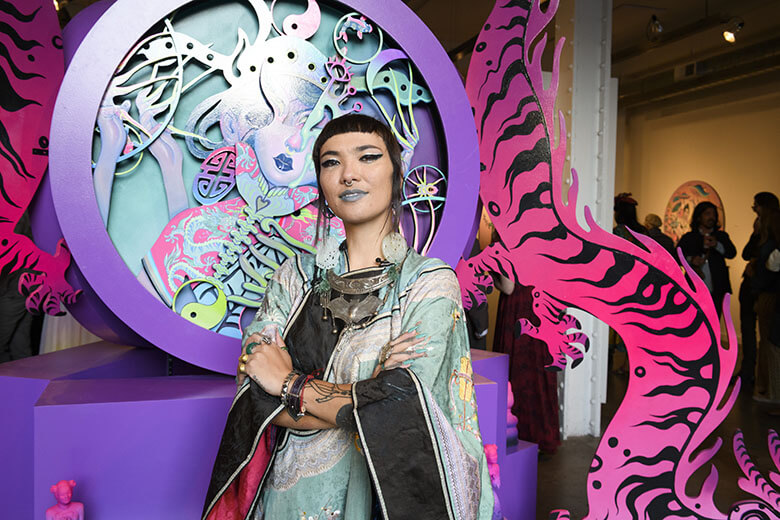 It’s Fantasy month at Montana Colors and your work fits perfectly into this category. If your work was all part of a fictitious universe, how would it differ to the one we live in?
In my world, I imagine people would all probably present as whatever horrible/amazing hybrid creatures they felt most comfortable as. People have forgotten what gender was and are well-versed in the practice of attuning into each other’s identities and character via authentic interaction and reciprocal care. Every day is Halloween and there is a Chinatown on Mars where one can hang out with Bjork and Yayoi Kusama at a spa.
Cars are replaced by giant electric snails that traverse the world via delicious goo. We have worked out how to replenish the impacts of the fishing industry twofold. Everyone is whatever color they’d like to be.
People carry bottles full of salamanders and cybernetic organisms on their backs, gravity would be optional, clothing would be optional, plastic would be replaced with mushrooms, the prison-industrial complex has been replaced by community rehabilitation programming, police have been abolished, we would have machines that would liquidate Nazi bones into sustainable habitats for endangered sea life, we will have developed spray paint that repairs the ozone, (good) murals are everywhere and the gays rule the earth. 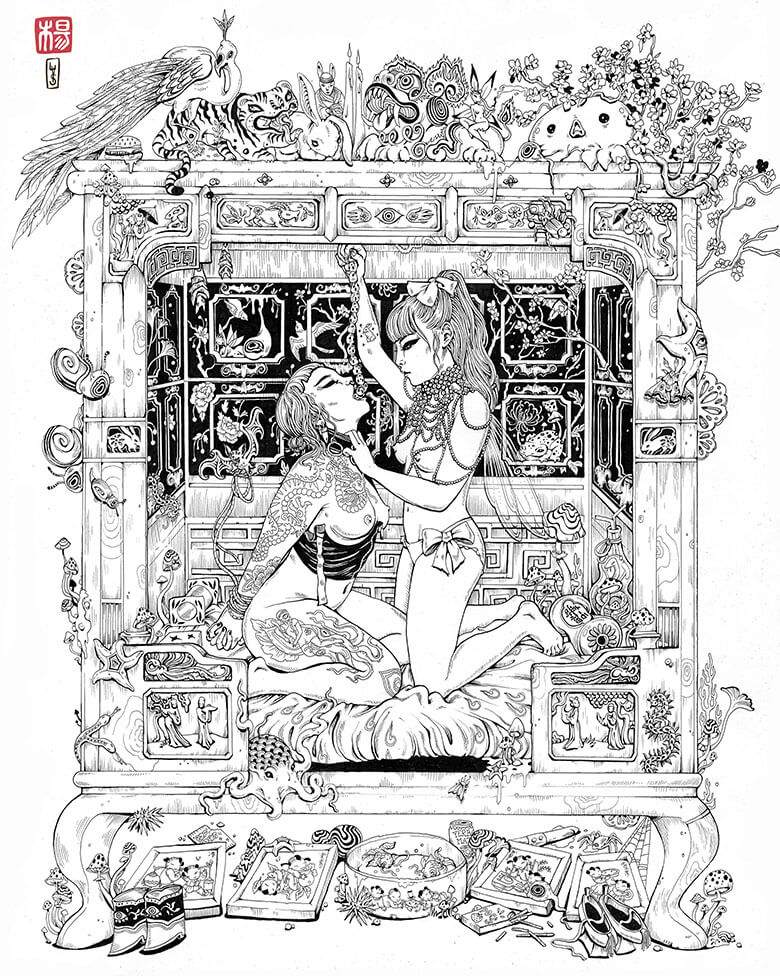 Support Lauren by making a purchase from their web store here.

Want to check out more content from #mtnfantasymonth? You can find a podcast interview with Tatiana Suarez here, HarryBones’ scariest creations here and a brand new Spotify playlist by Baer the Butcher here.